America’s rivals in the East are walking on Central Asian sunshine. 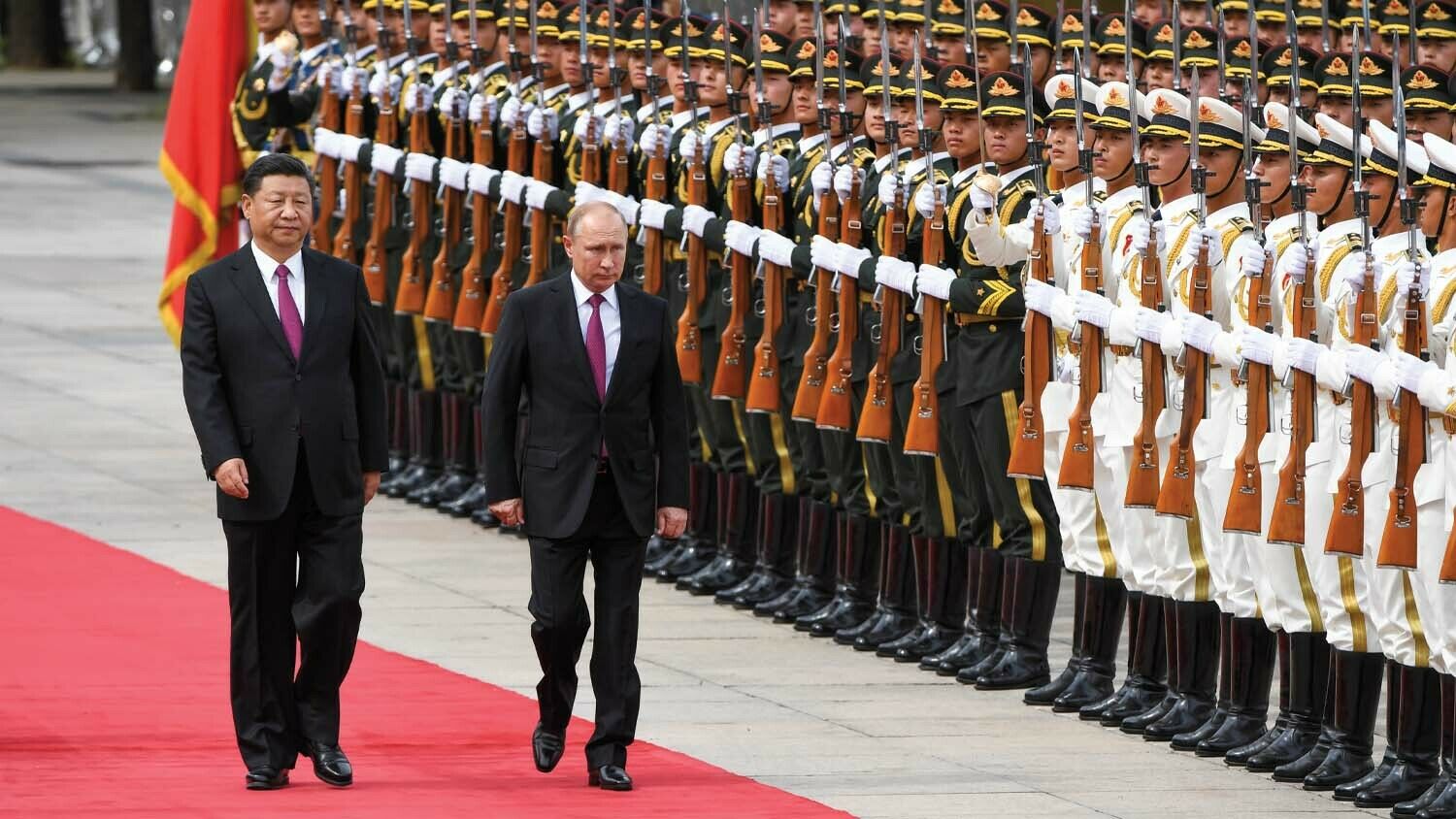 America’s rivals in the East are walking on Central Asian sunshine.

Who are the main victors of America’s chaotic Afghanistan withdrawal? At first glance, it may look like the Taliban came out on top. Within weeks of the United States’ ignominious exit, the Islamic terrorist organization took control and, with state-of-the-art U.S. weaponry, suddenly became the best-equipped militant organization in history.

But in the broader geopolitical picture, the even bigger winners are China and Russia.

For the last 70 years, the Chinese Communist Party has considered itself the government of not only mainland China but also of the island nation of Taiwan. The Taiwanese have worried that the regime will use military force to absorb their country. But they have managed to stay independent because of political support, weapons sales and, most importantly, security assurances from the U.S.

These assurances have been intentionally ambiguous since the late 1970s, but it has been well understood that if China waged war on the island, the U.S. would mobilize forces to defend it.

But now China sees Afghanistan as proof that those assurances are just empty rhetoric. On August 16, China’s government-controlled Global Times emphasized the blood and treasure America spent in Afghanistan and said that was the reason for the hasty withdrawal and abandonment of U.S. partners in the Afghan government. It then gleefully asked, “[H]ow many lives of U.S. troops and how many dollars would the U.S. sacrifice for the island of Taiwan? … From what happened in Afghanistan, [Taiwan’s leaders] should perceive that once a war breaks out in the Straits, the island’s defense will collapse in hours and the U.S. military won’t come to help.”

“[T]he U.S. would have to have a much greater determination than it had for Afghanistan, Syria and Vietnam if it wants to interfere,” the Times stated.

Chinese officials previously spoke in terms of “if” war breaks out. Since the Afghanistan withdrawal, they speak of “once” a military conflict erupts.

The Chinese also pointed to the U.S. failure to subdue the Taliban as proof that America has become a paper tiger, unable to defeat China even if it tried. “No major power was behind the Afghan Taliban, but the U.S. lost anyway,” stated another Global Times article. “The U.S. calls the move a drawdown. It is, in the truest sense, a meltdown” (August 16).

The Chinese are emboldened. And the likelihood that Chinese President Xi Jinping will solve the “Taiwan problem” with an invasion has grown far greater.

The same may be true of Russian President Vladimir Putin in some of the former Soviet space.

Ukraine is a top priority for Russia. Putin forcibly annexed Ukraine’s Crimean Peninsula in 2014 and ignited a smoldering uprising that put the country’s eastern regions under the control of Russia-backed separatists. Ukrainian officials say the conflict has killed 14,000 people so far and worry that Putin could use the simmering violence as a pretense for major invasion at any time.

To deter such a move, Ukrainian officials have worked to strengthen their partnership with the U.S. and to bring Ukraine into the U.S.-led North Atlantic Treaty Organization. So far, America has limited its involvement to supplying weapons and training, but U.S. officials have promised to help the nation defend itself in the event of a Russian invasion.

But as the world watched America’s rushed exit from Afghanistan, one of Russia’s highest-ranking security officials said it meant U.S. promises to the Ukrainian government were empty.

The U.S. abandoned its Afghan allies to “the whim of fate,” said Nikolai Patrushev, secretary of Russia’s Security Council and a close ally of Putin, during an August 19 interview with Izvestia. Ukraine’s leaders are “obsequiously serving the interests of its overseas patrons, striving to get into nato,” Patrushev said. “But was the ousted pro-American regime in Kabul saved by the fact that Afghanistan had the status of a principal U.S. ally outside nato?” Obviously not. He continued: “A similar situation awaits supporters of the American choice in Ukraine.”

Both Xi Jinping and Vladimir Putin see that the U.S. is deeply divided, war weary and in the midst of a profound leadership crisis. Both understand that America would have a difficult time mobilizing its partners to fight shoulder-to-shoulder again—whether for the type of unified and far-reaching alliance it led in Afghanistan, or even for the kind of smaller “coalition of the willing” it led in Iraq.

And both are enraptured by this new reality and the possibilities it opens up in their drive toward global dominance.

Inroads Into Afghanistan and Beyond

It is true that both China and Russia have plenty to worry about regarding the instability and jihadi extremism that the U.S. left behind in Afghanistan. While this chaos is 8,000 miles from America, for China and Russia it’s just a Taliban-piloted Super Tucano away.

Some of China’s most crucial Belt and Road Initiative infrastructure runs through the region, including the vast network of highways, railways and ports that make up the China-Pakistan Economic Corridor. China also shares a border with Afghanistan and deplores the possibility of jihadis entering its territory, or Uyghur separatists in China using Afghanistan as a base of operations. Meanwhile, Russia has several important allies—former Soviet states—that border Afghanistan and still considers the region a key part of its sphere of influence. One of Russia’s most important military bases abroad is in Tajikistan, and the Taliban now controls the entire Afghanistan-Tajikistan border.

Neither China nor Russia want to send their militaries into Afghanistan, particularly since the latter failed to win a demoralizing, decade-long war there during the Soviet era. To safeguard their interests, they are instead focusing on political and diplomatic strategies.

In July, Chinese Foreign Minister Wang Yi and the leader of the Afghan Taliban Political Commission, Abdul Ghani Baradar, held a landmark meeting. Wang repudiated America’s treatment of the nation and dangled major economic prospects in front of the Taliban, including an offer to extend the China-Pakistan Economic Corridor into Afghanistan. Baradar and other Taliban leaders called China a “warm friend” and pledged to safeguard its investments in the region.

“The Afghan Taliban will never allow any force to use the Afghan territory to engage in acts detrimental to China,” a Chinese statement after the meeting said.

Andrey Serenko, head of the Center of Contemporary Afghan Studies, said: “China has all the trump cards now. China influences Pakistan; China retains its position inside Afghanistan; they hold the Taliban accountable” (Financial Times, August 17). China could ultimately cause the Taliban regime to become so economically reliant on it that it could transform Afghanistan into a Chinese client state.

Meanwhile Russia, despite having followed America’s lead and declared the Taliban a terrorist organization in 2003, has built a significant relationship with the group in recent years. The Russians see the Taliban as a power broker they need to work with and have gone so far as to host its members for bilateral and multilateral meetings. These efforts are already paying dividends. While the U.S. and many other countries scrambled to evacuate their embassies in Afghan cities, Russia and China continued to operate their Kabul embassies at normal capacity.

The situation is complex for both China and Russia. But the bottom line is that as a result of the United States’ chaotic withdrawal and the ineptitude demonstrated by the Biden administration, both countries are growing more influential in Afghanistan, and stand to become far more influential throughout Central Asia.

For decades, the Americans and British stabilized much of the world and helped advance civilization for many peoples. America’s campaign in Afghanistan accomplished this for some Afghans and helped apply pressure against the nation’s neighbor to the west, Iran. But the ultimate failure of this campaign shows that the temperate Anglo-American era is ending. Clouds are gathering for a dark new global epoch.

During His ministry on Earth, Jesus Christ prophesied of this approaching age, calling it “the times of the Gentiles” (Luke 21:24). The term “Gentiles” simply means nations of the world which did not descend from the patriarch Israel. The Israelite peoples include the Jewish nation called Israel and also the United States, Britain and other related nations.

“Once you understand who Israel is, then you can understand how the Gentiles—the non-Israelite peoples—have started to take charge of the world already,” Trumpet editor in chief Gerald Flurry wrote in the February 2020 issue. “[W]hen this prophecy is completely fulfilled there will be two major powers—one revolving around Russia and China, and the other around Germany.”

He noted: “These ‘times of the Gentiles’ are yet to be fully realized. However, we are in the outer edges of this catastrophic storm.”

That was written 20 months ago. In light of Afghanistan’s transition from Israelite control to Gentile rule, it is clear that we are even deeper into the outer edges of that “catastrophic storm.”

In His forecast about the tempestuous days ahead, Christ said it would be a time of “[m]en’s hearts failing them for fear” (Luke 21:26). But in the very next verse, He promises that the destructive storm will eventually break up and give way to an unparalleled radiance: “And then shall they see the Son of man coming in a cloud with power and great glory” (verse 27).

These times of the Gentiles—the overcast outer edges of which the world has already entered—lead directly to Jesus Christ’s return! He will end the era of mankind’s violent rule. And for Afghans, Americans, Chinese, Russians and the whole world, He will bring in a new age of peaceful skies.

Russia and China in Prophecy
America’s status as the world’s lone superpower is rapidly fading. Other nations and groups of nations are angling to fill the void. Rising in the East is an emerging power bloc of tremendous potential—in manpower, economic heft and military might. Its growing presence is intensifying global competition for resources and for geopolitical influence. Where will this trend lead? You can know! Biblical prophecy provides a remarkable, penetrating preview of Asia’s future!
From The October 2021 Philadelphia Trumpet
View Issue FREE Subscription
Next
Previous