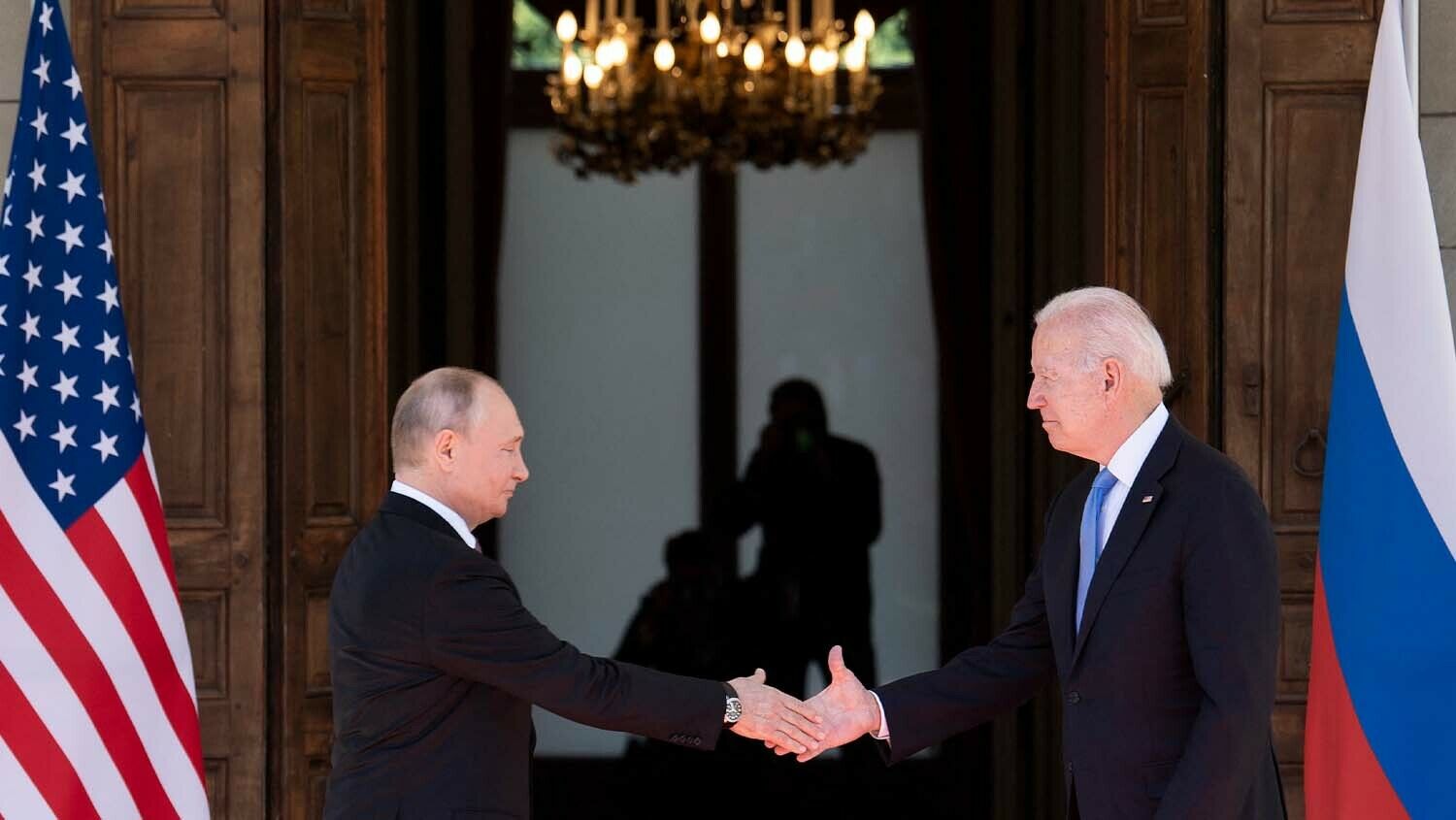 Russia, already at war with Ukraine, is now threatening a full-scale invasion. Germany is thwarting a united North Atlantic Treaty Organization response. So all eyes have turned to the United States. But America’s response could well be determined not by what is best for Ukraine, what is best for nato, or what is best for the U.S., but by the personal interests of Joe Biden.

Throughout U.S. President Donald Trump’s four years in the White House, leftist journalists claimed that the Russian government possessed compromising information about him. The infamous Steele dossier accused Mr. Trump of sordid escapades with Russian prostitutes and of criminal links to Russian oligarchs. None of the dossier’s claims against Trump were ever verified. Subsequent investigations have established that the project was funded by the presidential campaign of Mr. Trump’s rival for the presidency, Hillary Clinton. Ironically, the same accusations that prove false when applied to Mr. Trump prove true when applied to Hunter Biden.

An investigation into a laptop owned by Joe Biden’s scandal-plagued son has revealed 154,000 e-mails, 103,000 text messages and more than 2,000 photos. The evidence contained within (including posts depicting him with prostitutes and drugs linked to a pornography website) indicate that Hunter was involved in prostitution, drug trafficking, illegal business deals and corruption. The media tried to dismiss these revelations as “Russian disinformation.” Yet Hunter has owned up to most of them in his memoir Beautiful Things. These activities make Hunter an ideal target for foreign information services and raise the question: What other blackmail does Moscow have on the Bidens?

In 2020, the Senate Committee on Homeland Security and Governmental Affairs released a report titled “Hunter Biden, Burisma and Corruption: The Impact on U.S. Government Policy and Related Concerns.” It found that Hunter sent thousands of dollars to Russians and Ukrainians linked to what “appears to be an Eastern European prostitution or human trafficking ring.” It also found that Hunter accepted $3.5 million from the wife of a corrupt former Moscow mayor and that he made several trips to China under Secret Service protection while his father was vice president. More recent revelations show that Barack Obama’s Secret Service deliberately hid key details of Hunter’s travels to China, Russia and Kazakhstan from the public.

This raises grave concerns that Chinese, Kazakh, Russian and Ukrainian nationals were attempting to bribe the Obama administration by giving large sums of money to Joe Biden’s family. Hunter worked for the energy company Burisma Holdings, owned by an ally of former Ukrainian President Viktor Yanukovych. Yanukovych was ousted from power after signing several dictatorial anti-protest laws on Jan. 16, 2014. He now lives in exile in Russia. The British government alleges that four of Yanukovych’s political allies are still working with Russian intelligence services “to subvert Ukraine.” So there is a real possibility that some of Hunter’s business contacts at Burisma may have already told Russian intelligence services about his corrupt business dealings.

Hunter has also described Kazakhstan’s former intelligence chief, Karim Massimov, as a personal friend. In 2005, Sen. Hillary Clinton canceled a meeting with Massimov in an attempt to force the Kazakh government into approving a lucrative uranium-mining deal that would benefit one of her associates. But Massimov did not meet Hunter until 2014 when Hunter was trying to negotiate an energy deal between Burisma Holdings and Kazakhstan’s government. Hunter allegedly slipped his Secret Service detail for this super-secret meeting.

Now Massimov has been arrested by Kazakhstan’s government on suspicion of treason. Street protests over fuel prices have sparked a power struggle between Kazakh President Kassym-Jomart Tokaye and his predecessor Nursultan Nazarbayev. Since Massimov is a close ally of Nazarbayev, he is suspected of being behind the protests. Another corrupt oligarch with dirt on Hunter is now in the custody of Russian allies.

The noted documentary maker Peter Schweizer has released a new book titled Red Handed: How American Elites Get Rich Helping China Win. This book exposes Hunter’s corrupt business dealings in Communist China. Specifically, it reveals how the Biden family made $31 million from five business deals with individuals directly tied to the Chinese spy apparatus. One of these tycoons is Che Feng, the son of a People’s Liberation Army soldier and the son-in-law of the governor of the People’s Bank of China. Hunter and his partners refer to him as “The Super Chairman” because of his efforts to “fuse Chinese financial might to those with access to the highest levels of power in the Western world.” This effort led to the creation of Bohai Harvest rst. This Hunter Biden firm helped China buy 44 percent of the world’s cobalt from U.S. company Freeport-McMoRan.

Hunter’s other business partners included the Communist Party secretary general at Harvest Fund Management, the daughter-in-law of a politburo member, and a titan who gave Hunter an $800,000 diamond during an influence campaign to make the Czech Republic China’s “gateway to the European Union.

“The Super Chairman” has been arrested for money laundering and bribery. You can be sure that the politburo of the Chinese Communist Party knows as much about Biden family corruption as Vladimir Putin does. Is it any wonder Joe Biden is so soft on Russia and China? His family has made millions dealing with these powers, and he does not want Putin or Xi Jinping talking about Hunter’s numerous crimes.

This shocking corruption is not unique to the Biden family. “The central pillar of the corrupt new order is the American elite’s relationship with China,” Lee Smith wrote in his article “America’s China Class Launches a New War Against Trump.” “American political and corporate elites didn’t choose decline. They chose to get rich. By shipping America’s manufacturing base off to China, they seized a business opportunity the likes of which had never been seen before—an enormous captive labor force controlled by an authoritarian regime that guaranteed the steady production of goods at a fraction of what it would cost at home.”

America’s elites have declared independence from the U.S. and started putting their own financial interests above U.S. national security.

President Trump was willing to start a trade war with China and sanction the Nord Stream 2 pipeline because he did not want the U.S. to be overly dependent on China or Germany to be overly dependent on Russia. But the Biden administration is willing to betray the interests of the American people to powers like China and Russia because this treachery lines their pockets and advances their globalist ideology

The Prophet Amos condemned greedy leaders who put selfish interests above the interests of their people. “Woe to them that are at ease in Zion, and trust in the mountain of Samaria, which are named chief of the nations, to whom the house of Israel came! … Ye that put far away the evil day, and cause the seat of violence to come near; That lie upon beds of ivory, and stretch themselves upon their couches, and eat the lambs out of the flock, and the calves out of the midst of the stall; That chant to the sound of the viol, and invent to themselves instruments of musick, like David; That drink wine in bowls, and anoint themselves with the chief ointments: but they are not grieved for the affliction of Joseph. Therefore now shall they go captive with the first that go captive, and the banquet of them that stretched themselves shall be removed” (Amos 6:1-7).

Today, you see this same attitude in America—especially among the political class selling America’s industrial might and natural resource wealth to foreign nations in return for profit. They put far away the evil day and refuse to mourn for the affliction of their country. Donald Trump built his political campaign on a promise to drain the swamp of establishment politicians and start fighting for the interests of the American people.

Trumpet editor in chief Gerald Flurry explained in “Who Is the Modern-Day Jeroboam?” that President Trump is an end-time type of King Jeroboam ii. Like the ancient King Jeroboam ii, God uses him to save his nation from the brink of destruction, just as God warns, “I will not again pass by them any more” (Amos 7:8). This is America’s last chance to repent. That is why God is allowing so much governmental corruption to be exposed. People have to see how bad things are if they are going to “wake up” and realize that something is not right!