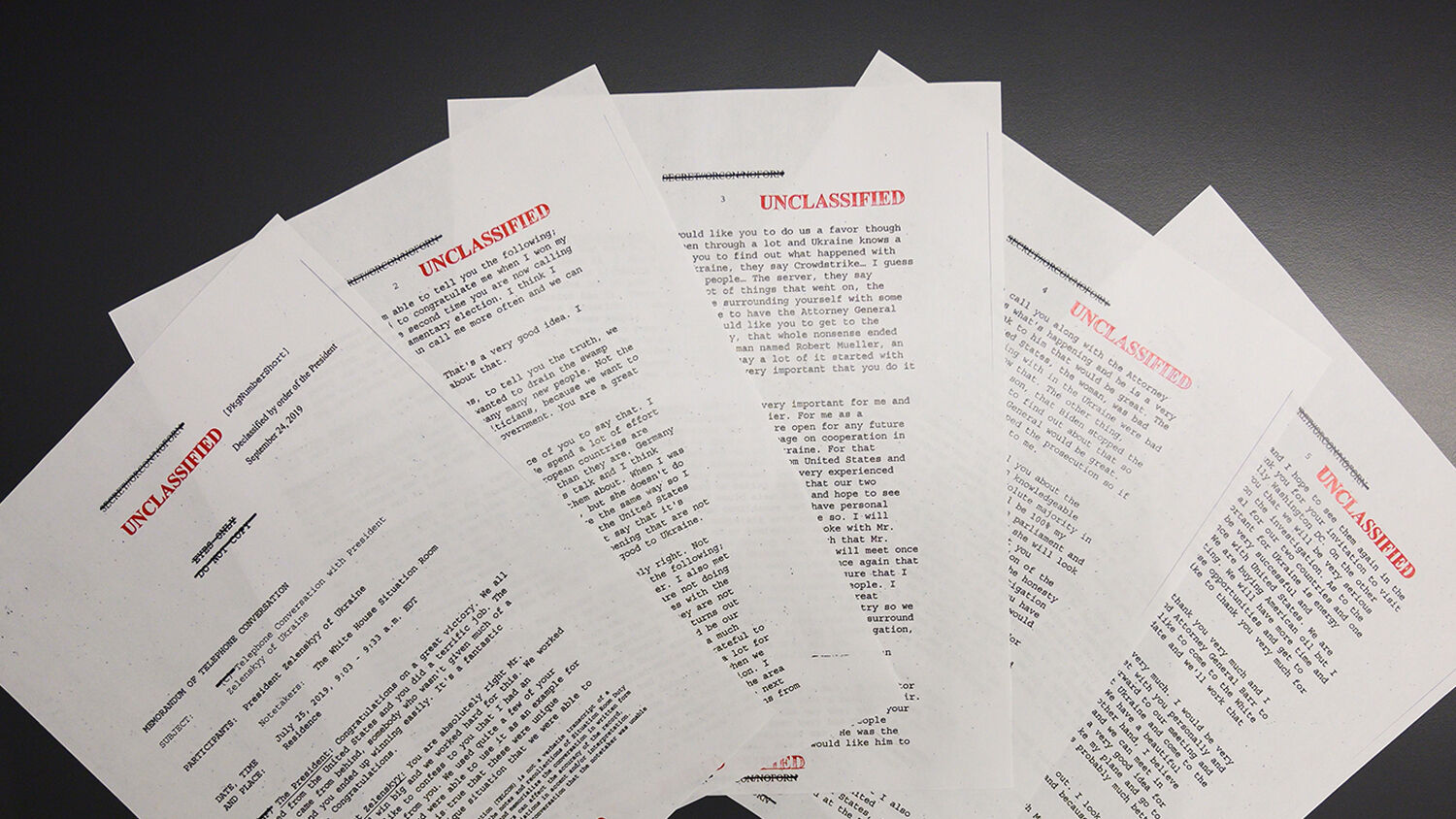 A real scandal that could cost the lives of millions is being overlooked.

The phone transcript between United States President Donald Trump and Ukrainian President Volodymyr Zelensky that was published on September 24 has exposed a real scandal. The scandal revolves around the fate of an entire nation and millions of citizens, yet it is ignored by the mainstream media: Germany and the European Union are sacrificing Ukraine to appease Russia.

In his conversation with Zelensky, President Trump said: “I will say that we do a lot for Ukraine. We spend a lot of effort and a lot of time. Much more than the European countries are doing, and they should be helping you more than they are. Germany does almost nothing for you. All they do is talk, and I think it’s something that you should really ask them about. When I was speaking to [German Chancellor] Angela Merkel, she talks Ukraine, but she doesn’t do anything.”

Some may write this off as typical Trump aggression against Germany. But notice Zelensky’s response:

Yes you are absolutely right. Not only 100 percent, but actually 1,000 percent. And I can tell you the following: I did talk to Angela Merkel, and I did meet with her. I also met and talked with Macron, and I told them that they are not doing quite as much as they need to be doing on the issues with the sanctions. They are not enforcing the sanctions. They are not working as much as they should work for Ukraine. It turns out that even though logically, the European Union should be our biggest partner, but technically the United States is a much bigger partner than the European Union. And I’m very grateful to you for that because the United States is doing quite a lot for Ukraine, much more than the European Union, especially when we are talking about sanctions against the Russian Federation. I would also like to thank you for your great support in the area of defense.

This is an unusually strong endorsement of the president and the U.S. by another world leader. It does indeed seem like a paradox that the United States, on the other side of the Atlantic, is helping Ukraine more than its next-door neighbor.

The criticism was obviously not well received in Germany. After an inquiry from German newspaper Bild, a government spokesman stated that the government would not comment on the subject. But while Germany’s government has kept quiet, the media has reported with rage. “‘She Doesn’t Do Anything,’ Trump Gossiped About Merkel’s Ukraine Policy,” Spiegel Online headlined. Others were quick to point out that Germany has, in fact, provided substantial financial aid. It is true that behind the U.S. and the EU, Germany is Ukraine’s greatest financial donor. But it was not contributions that President Trump and Zelensky were criticizing; rather, Germany is not doing enough against Russia’s advances.

Bild pointed out that Germany has directly supported Ukraine with $741 million since the start of the Ukraine crisis in 2014. With the contributions Germany has made through the EU added, Germany has given as much as $1.3 billion.

But Ukraine’s leadership is still upset. Ukraine has criticized Germany and France repeatedly for looking to compromise in the conflict with Russia. This compromise, however, favors Russia. “Germany’s ‘compromise’ efforts are seen in Kiev as pressure to give up Ukrainian sovereignty and territorial integrity,” Bild explained. In the negotiations, Russia is not treated as the aggressor but rather as a nonbelligerent.

In cooperation with the U.S. and EU, Germany could help save Ukraine from the claws of the Russian bear. Instead, it is watching as the country descends into turmoil and is slowly devoured.

Even worse than that: Germany is actively involved in something that could be absolutely devastating for the country—building the Nord Stream 2 pipeline.

With Germany connected directly to Russian gas supplies, Ukraine loses enormous value as a transit nation. “Moscow wants to bring Ukraine back into Russia’s orbit, and it sees gas as a possible tool,” wrote Steven Pifer, senior fellow at the Brookings Institution’s Center on the United States and Europe. “If it has no gas sales to Ukraine, it can still end transit through the country, cutting off the substantial transit fees (about $3 billion per year) that it now pays Kiev.”

Thus Nord Stram 2 is a powerful and dangerous tool in the hands of Russian President Vladimir Putin. “Nord Stream and Nord Stream 2 are key components of Putin’s plan to tighten his grip on nations in Eastern Europe that used to be part of the Soviet Empire,” Trumpet editor in Chief Gerald Flurry explained in “Germany and Russia’s Secret War Against America.”

The loss of nearly $3 billion a year is much greater than all of Germany’s prior financial aid. But it is worse than that. Nord Stream 2 allows Russia to cut off Ukrainian gas supplies while still supplying Europe’s mainland.

The Nord Stream pipelines give Russia even more leverage over Ukraine than ever before. At the same time, they heavily decrease Germany’s need to support Ukraine in a possible conflict. As a result, Putin could force Ukraine into submission by letting thousands freeze and starve to death.

If it weren’t for the U.S., Ukraine would have little hope for a prosperous future. But even with American help, that hope is only temporary. Russia is gaining control of the nation’s wealth.

Germany’s reluctance to help Ukraine has devastating consequences for the world. It empowers Russia and reveals Germany’s willingness to sacrifice the lives of millions for its own economic prosperity. Recent events prove what Mr. Flurry indicated in the November-December 2008 issue of the Trumpet, when he wrote:

However, under the leadership of Angela Merkel, this Russian-German cooperation is unbalanced. Russia is getting more and more powerful, while Germany responds slowly to its advances. The longer Russia flourishes, the more aggressive Germany will need to become to ensure its supremacy on the Continent.

This also shows that Germany will need a much stronger leader. There is currently only one man willing to face Germany’s challenges head-on: Karl-Theodor zu Guttenberg. Early on in the Ukraine crisis, the former defense minister wrote in “The Return of Europe’s Sleepwalkers” on Sept. 3, 2014:

Russia is waging war on Ukraine, partly as punishment for Kiev’s attempt to move closer to the EU. Russia did not stop at Crimea and, unless it is stopped, it will not stop at eastern Ukraine. In the coming winter, Moscow could leave millions of Europeans without heating by reviving its cynical gas-pricing policies. Despite this threat—or perhaps out of fear of it—the EU’s response to Russian actions has been halfhearted at best.

Guttenberg is a known critic of Russia, and the more powerful Russia gets, the more Europe will need a leader like him. The Bible reveals that Germany will soon get a leader that takes the upperhand in negotiations with Russia. The Bible speaks of this strongman as “a king of fierce countenance” (Daniel 8:23).

Germany and Russia are making deals that disregard the lives of millions of people. There are real threats in this world that most people give little attention. To understand the urgent prophetic significance of Germany sacrificing Ukraine to Russia, read Mr. Flurry’s article “Germany and Russia’s Secret War Against America.”