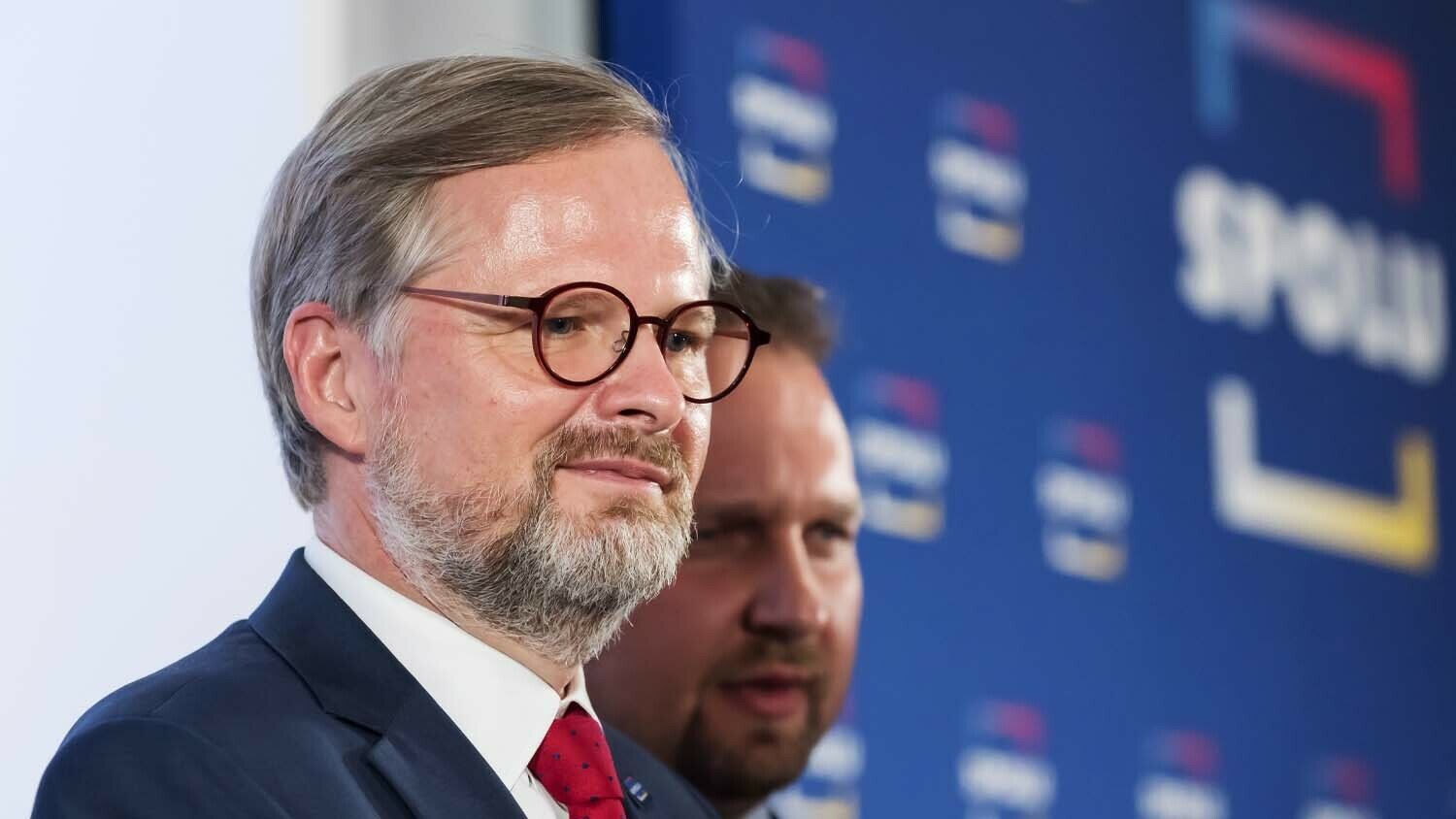 Is this ‘Czech’ mate for strongman Andrej Babiš?

Czech President Miloš Zeman could ask Babiš to form a government first. Babiš may be holding out to see if this happens. But even if he did, he probably wouldn’t survive a vote of confidence by parliament.

Spolu has already announced a coalition agreement with the centrist Pirates and Mayors bloc. Together, they can form a majority government, with 108 of the parliament’s 200 seats. Bloomberg reported October 13 that Zeman agreed to meet with Fiala.

“We can count to 108,” said ano deputy leader Jaroslav Faltynek. “So we expect we will end up in opposition.”

Even Babiš apparently signaled his days in office were numbered. “We did not expect that we would lose,” he said. “I would like to congratulate Petr Fiala for a great finish. They did well, and I think that even they are surprised, but we accept it.”

This means the next Czech prime minister is likely Petr Fiala.

Many see the election as a victory against hard-right populism. Otto Eibl, Masaryk University’s political science department head, called the election proof that “populism is beatable.” Dalibor Rohac, senior fellow at the American Enterprise Institute, said, “There’s a broader lesson there about populist and anti-elite movements: Unless [those movements] can deliver on the governance front their political role may be transitory.” The New York Times said the election is “offering a road map for toppling strongmen.” The Times suggested other hard-right regimes in Hungary and Poland could be under threat.

“People were fed up with the populist, short-term politics of Andrej Babiš,” Fiala said. “We want to do normal, competent and decent politics and people have believed in us.”

But is the rejoicing premature?

To answer this, we need to answer another question: Who is Petr Fiala?

Fiala was born in 1964. His Jewish father was a Holocaust survivor, but Fiala was raised in a conservative Catholic family. He was baptized in 1986, when Czechoslovakia was still under communism. He’s referred to as a “pragmatic believer.”

Unlike Babiš, an anti-establishment billionaire, Fiala comes from the political mainstream. He was an aide to former Czech Prime Minister Petr Nečas and later served as his minister of education. He was also rector emeritus of Masaryk University, the Czech Republic’s second-largest university. Since 2013, he has been in opposition.

His party, the Civic Democratic Party (ods), is the largest faction within the Spolu bloc. It favors low taxes and soft euroskepticism. It has been the dominant conservative party in the country since the dissolution of Czechoslovakia in the 1990s. In a 1997 academic paper, Fiala wrote that the ods has a “Christian-democratic segment” and “professes a Christian inspiration.”

Unlike some other traditional European conservative leaders, Fiala is staunchly anti-Islamic immigration. In the aftermath of the 2016 Munich terrorist attack, Fiala said, “The Czech Republic has the advantage that it does not have stronger risk communities that support radical Islam, terrorism and other things. This is an advantage that I would try to keep.”

“Radical Islam is at war with Europe,” he said. “I have been saying this for a long time and I wrote [of] it years ago. We are in a war that was declared by radical Islam and is being waged on our streets. We have to act accordingly.”

When asked his opinion of German Chancellor Angela Merkel’s view that migrants from the Middle East aren’t involved in terrorism, Fiala said that “the facts show something else. Migration, of course, has something to do with radical Islam. It is no coincidence that in Muslim communities, but also in the ranks of new migrants, there is support for radical attitudes.”

To combat radical Islam, Fiala advocates beefing up the Czech security forces. He said that security “is the primary task of the state. Everything else is behind it.” To combat terrorism, he said the government should “[improve] the quality of the secret police forces.” He also rejects European Union migration quotas and toys with closing the Czech border to illegal migrants.

In 2015, he advocated for more European military involvement in the Middle East to stop radical Islam. “We will not solve the problem of the migration wave and the destabilization of the Middle East and North Africa if we do not proceed to military action,” he said in 2015. “It requires the determination of Western democracies to fight for their interests and it means going into action through the ground forces.”

When asked if the Civic Democratic Party would want to follow Britain out of the EU, Fiala said no. “The ods has a clear policy toward the EU, long-term …. The position of the ods toward the EU is reformist.”

And Fiala supports soft-euroskeptic parties in other countries. Principally, Poland’s Law and Justice (PiS) party. When PiS won the 2019 Polish election, Fiala congratulated them. According to the Czech daily Deník, “Fiala … pointed out that the ods and PiS have been cooperating for a long time in a joint faction in the European Parliament and that cooperation between the Czech Republic and Poland is important for the development of Central Europe and for promoting sensible EU reform.” Deník quoted Fiala as saying: “I therefore welcome the results of the Polish parliamentary elections, including a high turnout, which confirms a strong mandate for the victorious Law and Justice.” Both the ods and PiS belong to the European Conservatives and Reformists bloc in the EU Parliament.

Law and Justice is a hard-right Catholic interests party. Since they’ve been in office, PiS has reformed Polish law to align it with Catholic social teaching. PiS has been accused of defending the Catholic Church in the wake of the church’s pedophilia scandals, which have hit Poland hard. PiS is also one of the biggest defenders of Viktor Orbán, one of the EU’s most authoritarian leaders, in Brussels.

Longtime Trumpet readers will be familiar with our forecast that the EU will turn itself into a superpower, which we base on biblical prophecies such as Daniel 2 and Revelation 17. Revelation 17:10 shows that 10 “kings,” or strongmen, will unite in this end time. Verse 7 shows that these kings will be guided by a “woman,” biblical symbolism for a church (2 Corinthians 11:1-3; Ephesians 5:22-32). Daniel 2:41-44 identify these same 10 kings as being divided into two general blocs—five from Western Europe and five from Eastern Europe. (Please request our free reprint article “The Daniel 2 Image” for more information.)

We also focus on Europe’s response to radical Islam. Daniel 11:40-43 is a prophecy of Europe launching a massive invasion in the Middle East to counter radical Islam. You can read more about this in our free booklet The King of the South.

In our January 2018 Trumpet issue, we featured a special report on the rise of strongmen politicians around the world. We noted Andrej Babiš as a man to watch, alongside Hungary’s Viktor Orbán and Poland’s Jarosław Kaczyński, PiS’s chairman.

Babiš just lost an election and has apparently conceded defeat. People are celebrating Fiala’s apparent win as a return to normalcy for the Czech Republic.

Babiš does fit the strongman profile better than Fiala. His premiership has been characterized by one-man rule. He is a friend of Orbán and even used him in his campaign as an electioneering prop. He is guilty of Holocaust denial and was a former agent for the Czechoslovakian Communists’ secret police. That Fiala is descended from Holocaust survivors also makes him a less-likely pick than Babiš.

But just because Fiala isn’t Babiš doesn’t mean he isn’t a man to watch. His opinions on Muslim immigration, his advocating for a European invasion of the Middle East, his Catholic upbringing and worldview, and his support of PiS are all noteworthy.

And Babiš probably won’t be leaving politics, either. His party still won the most seats. And iron-fisted populists generally don’t give up their ambitions without a fight.

Either way, the political situation in Prague is interesting. Either Babiš or Fiala could become the Czech Republic’s strongman.

We’ll have to wait and see.

If you would like to learn more about where this “rise of the strongmen” will take Eastern Europe, please read “Introducing Europe’s Eastern Strongmen.”