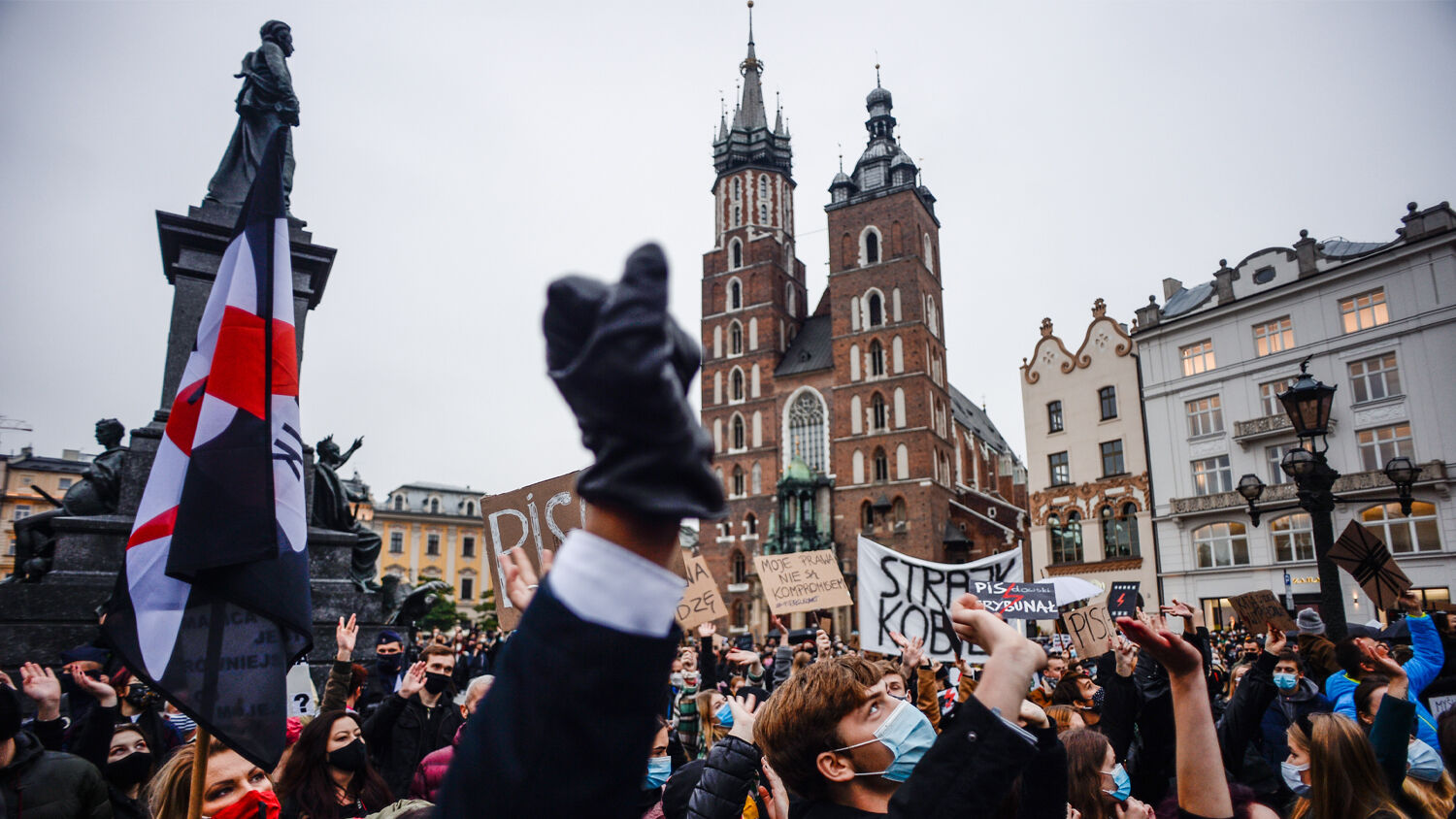 Leftist activists versus the Vatican—who will win?

Masses of people have taken to the streets of Poland, for roughly two weeks now, with 100,000 demonstrators in Warsaw alone, to protest a new nationwide anti-abortion restriction. The restriction is the result of a ruling by Poland’s constitutional court on October 22 banning abortions due to fetal defects. The court said that such abortions are unconstitutional because they violate “the respect and protection of human dignity” for fetuses, according to Constitutional Tribunal President Julia Przyłębska.

Poland has one of the most restrictive abortion laws in the Western world. Until the court’s ruling, abortions could only legally be allowed in cases of fetal defects, potential harm to the mother, rape or incest. The vast majority of Poland’s 1,000-plus legal abortions annually are due to fetal defects.

While a majority of Poles support adhering to the abortion regulations prior to the constitutional court’s judgment, only 22 percent support liberalizing it to the standards of other Western countries by introducing abortion-on-demand.

“Fetal defects,” under Poland’s now-challenged law include everything from physical deformities to Down syndrome, the latter being one of the primary reasons unborn children are aborted. Polish President Andrzej Duda attempted to compromise with the suggestion of a law that would permit abortions in cases where the fetus is so deformed that it wouldn’t survive outside the womb but ban abortions because of Down syndrome; the idea was condemned by both politicians and activists on the left.

Przyłębska referred to aborting unborn children due to defects as “eugenic practices.”

The Polish government has since indefinitely postponed publishing the court’s decision, which technically doesn’t make it legally binding as of yet. However, the government made repeated attempts to introduce a similar ban in 2016 that was withdrawn after large-scale protests. The latest postponement is Warsaw backing down to calm the protests but not reversing its goals. Once the situation on the streets has calmed down, the government will likely try to implement the ban again.

This makes the latest court ruling in Poland really good news. From conception, a zygote has a genetic code unique from (but based off of) its mother’s. It takes less than three weeks for an embryo to develop its own heartbeat, and brain waves can be detected at about seven weeks. From a spiritual perspective, the Bible clearly places protection on the unborn, showing that fetuses are not “just a bunch of cells” but individual people with their own individual rights. Notice Exodus 21:22-23: “If men fight, and hurt a woman with child, so that she gives birth prematurely, yet no harm follows, he shall surely be punished …. But if any harm follows, then you shall give life for life” (New King James Version). To learn more about why abortion is murder, please read our article “The Missing Dimension in the Abortion Issue.”

However, as admirable as it is for a government like Poland’s to stand up against the leftist juggernaut, there are deeper issues at play here, and they point to Poland going down a dangerous direction.

In 2014, the Spanish government passed a law that put restrictions in place similar to Poland’s court ruling. We wrote at the time in “Is Spain Returning to Catholic Government?” that, while any opposition against the worldwide abortion movement is good news, the law was part of a larger trend:

This is not an isolated incident. Spain has revived the role of the Catholic Church in the nation’s government and giving it a privileged place in the nation’s educational system. …

Through direct aid, special tax treatment and the government paying the salaries of Catholic religious workers, the government gave the church over €11 billion (us$15 billion) in 2011 … handing the equivalent of 1 percent of its entire economic output to the Catholic Church. …

In early 2013, the [Spanish government] pushed through some highly contentious school reforms. The new law allows the government to continue to fund the Catholic Church’s private single-sex schools—something the previous government tried to stop. It also makes classes in religion compulsory. These classes are taught by teachers appointed by the local bishop, but the teacher is paid for by the state. It is Sunday school imported into the regular school day and funded by the government. …

What’s most important here is the direction of travel.

Many countries in the former Communist bloc—like the Czech Republic, Estonia, Latvia and the former East Germany—have embraced Western secular values in their societies. Poland is not one of these countries. Poland, like Spain, is heading to a government where church and state are intertwined. And Poland—even under communism, historically—is one of the most Catholic countries in Europe. A 2019 demographics report put roughly 87 percent of Poles as being Roman Catholics; the next largest Christian denomination is the Polish Orthodox Church, which makes up only 1.4 percent of the population. Politico wrote in 2019:

In Poland, it’s hard to escape the cross.

Ceremonies to open public buildings, fire stations, football pitches, even traffic circles, usually don’t take place without the blessing of a priest. National celebrations are accompanied by a mass. A crucifix often hangs in public offices, schools and courts, next to the Polish coat of arms.

For a while now, municipalities in Poland have been declaring themselves “lgbt-free zones,” zones where both people who identify as lgbt and the promotion of “lgbt ideology” are banned. The municipalities, taken collectively, reportedly cover about a third of Poland.

Again, like the abortion issue, this is in one sense good news. The Bible in both the Old and New Testaments plainly teaches that homosexuality is a sin (Leviticus 20:13; Romans 1:26-28; 1 Corinthians 6:9-10). But, again, it is the wider trend that we have to look at.

The protesters are well aware that they are attacking the Catholic establishment. Never before has Poland had such a large and disruptive protest against the Catholic Church itself.

In the city of Poznan, 20 individuals staged a sit-down protest in front of the altar of a Catholic Church, forcing the priests to stop the mass. The Warsaw cathedral has been vandalized with pro-abortion graffiti. Memorials to Pope John Paul ii—the former archbishop of Krakow and Polish national hero who was instrumental in ripping Poland from the Soviet orbit—have been vandalized in various spots in the country.

In Poland, you cannot insult Pope John Paul ii and not expect to make a lot of people angry.

Jarosław Kaczyński, chairman of Poland’s ruling Law and Justice Party and a man seen by many as the real leader of Poland despite being neither president nor prime minister, said about the attacks: “This attack [on churches] is an attack that is meant to destroy Poland. It is supposed to lead to a triumph of forces whose power in fact will end the Polish nation as we know it.” He called for people to “defend [Polish churches] at any price.”

Many of the protesters are rallying around the slogan “This is war.” While law and justice are the primary recipients of the protesters’ rage, it is clear that they are also declaring war against Catholicism’s influence in Poland. And all of this chaos is causing many to answer Kaczyński’s battle cry, including many on the far-right. Polish far-right leader Robert Bakiewicz stated, “The left-wing groups say it is a war. We are taking part in this war.” Bakiewicz has a sizable following among Catholic priests.

Even with all of the Catholic influence already in Polish politics and society, the latest attacks on the church may give the Polish people cause to support an even greater increase in clerical influence.

Regardless of what side of the culture war you support, this won’t spell good news for the world.

The Holy Bible has a lot to say about Catholicism’s current inroads into European politics. Revelation 17 describes a woman, a “great whore” (verse 1), who involves herself with the “kings of the earth” (verse 2). In biblical symbolism, a woman is a symbol for a church (Ephesians 5:22-23, 32; 2 Corinthians 11:2). This “great whore” rides upon a “beast,” which in biblical symbolism represents an empire (Daniel 7:17, 23).

Herbert W. Armstrong, founder of the Worldwide Church of God and one of the most prominent theologians of the 20th century, identified the “beast” of Revelation 17 with a religious-political system that resulted in seven resurrections of the old Roman Empire throughout history, called the Holy Roman Empire. The details of this are proved in his booklet Who or What Is the Prophetic Beast?

Only one church in the world is mixed with the world’s politics and repeatedly “rides” on top of empires, steering them to do its bidding. Only one church has influenced the Roman Empire and its resurrections from ancient times to the present day.

As we prove in our free book The Holy Roman Empire in Prophecy, six of the seven resurrections have come and gone. The seventh one is rising now in Europe as a conglomeration, a superstate, of several European nations to form a united superpower. Revelation 17:12-13 show that this final resurrection of the empire will be made up of 10 kings ruling over 10 kingdoms.

It is likely that Poland will be one of these 10 kings. And once this “beast” power is awakened, it will not mean good news for the world.

To learn more where all this is leading, what it means for your life, and how you can be spared from the beast’s wrath, request our free literature Who or What Is the Prophetic Beast? and The Holy Roman Empire in Prophecy.