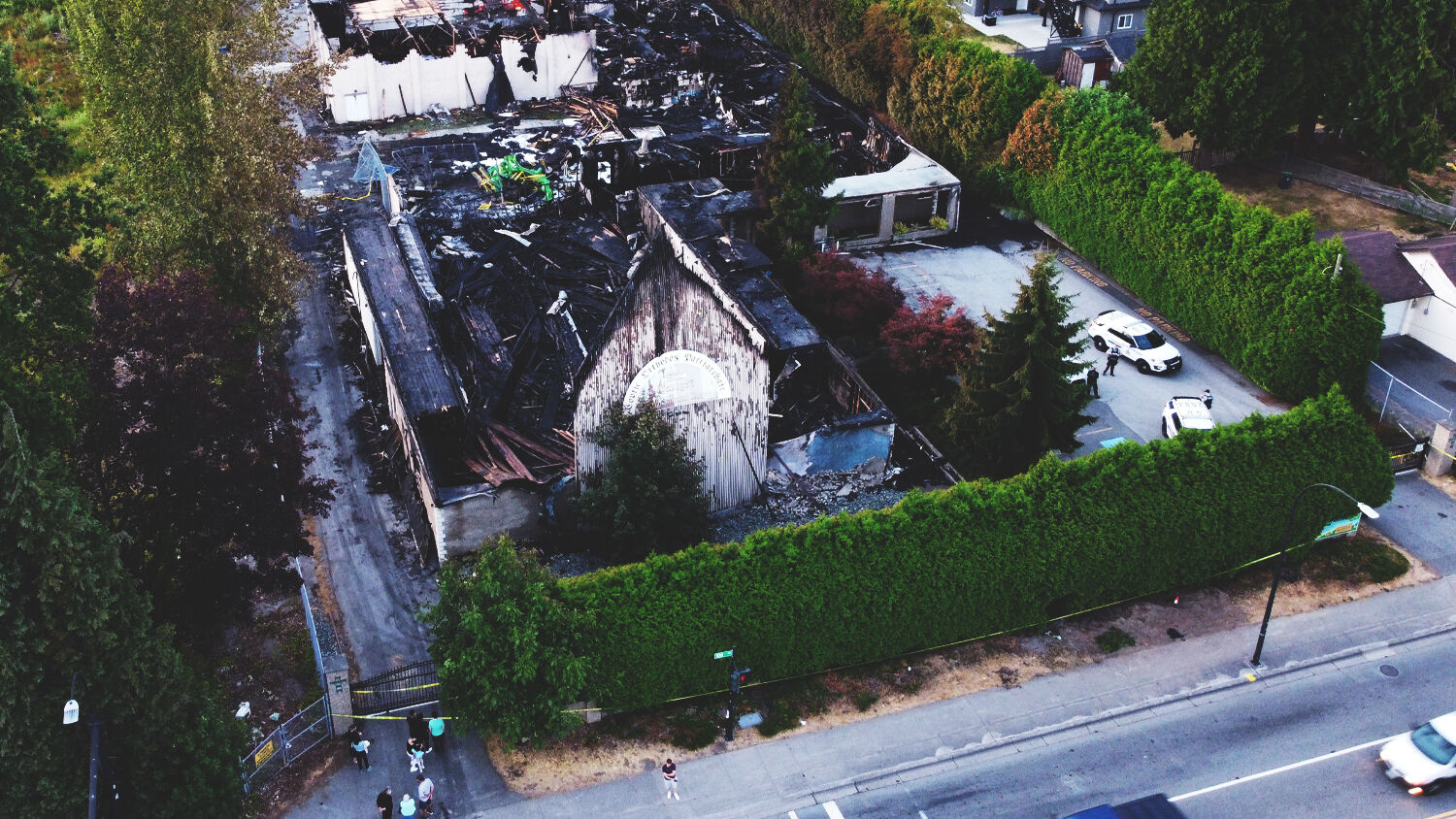 An aerial view of St. George Coptic Orthodox Church is seen after it was destroyed by fire in Surrey, British Columbia, Canada on July 19.
Mert Alper Dervis/Anadolu Agency/Getty Images

If anti-Christian terrorists can destroy Canada’s churches, the nation’s last connection to its long history with God will be severed.

Churches across Canada are going up in flames. Over the past few months, more than 50 churches have been vandalized or burned. St. George Coptic Orthodox Church in Surrey, British Columbia, was incinerated on July 19; St. Paul’s Anglican Church near New Hazelton, British Columbia, was scorched on June 27. But most commonly the targets are Catholic churches, which have been burned in Alberta, British Columbia, Manitoba, Ontario, Nova Scotia, the Northwest Territories and Saskatchewan. The Royal Canadian Mounted Police have called these burnings “suspicious,” but have not arrested anyone.

An examination of the vandalized churches reveals why they are under attack. A series of churches in Calgary, Alberta, were not burned, but smeared with red and orange paint and scrawled with the numbers 215 and 751. These numbers reference the unmarked child graves found at Native American boarding school sites run by Catholic churches in British Columbia and Saskatchewan.

In 1883, Canadian Prime Minister John Macdonald passed a cabinet measure to establish three residential schools to be operated by the Catholic and Anglican churches. The purpose of these schools was to educate Native American children about Western cultural values away from the influence of their pagan tribes. Over the next century, the number of boarding schools grew from three to more than 130. These schools educated about 150,000 Native American children, but approximately 3,200 of them died due to neglect, disease, accident or mistreatment. As the schools were overcrowded and underfunded, many boarding school teachers and administrators grossly abused their authority.

Ontario Provincial Police files obtained by cbc News reveal that Catholic nuns at St. Anne’s Indian Residential School in northern Ontario tortured children in a homemade electric chair and that the gardener at this residential school sexually abused children. At other schools, children were often whipped, sometimes to the point of bleeding. Yet the Vatican has not apologized for any of these horrendous abuses in the same way the Canadian government has apologized for them.

The last federally funded residential school closed in the 1990s, and St. Anne’s Indian Residential School is now a water treatment plant. The National Truth and Reconciliation Commission has been interviewing witnesses to chronicle the extent of the abuse that took place. Many politicians and law enforcement officials have speculated that this commission, and the recent discovery of two mass graves, has inspired arsonists to burn churches across Canada—even though the specific churches these arsonists are targeting probably had nothing to do with these abuses in most cases.

Alberta Premier Jason Kenney decried the arsons as “cowardly” and “an attack on Canadian values,” but Prime Minister Justin Trudeau took a softer approach: “It’s real, and it is fully understandable given the shameful history we are all becoming more aware of. I can’t help but think that burning down churches is actually depriving people who are in need of grieving and healing and mourning from places where they can grieve and reflect and look for support.”

Other radical politicians have even taken to encouraging more arson. Harsha Walia, the executive director of the British Columbia Civil Liberties Association, responded to a Twitter post about the burning of two churches with a single sentence: “Burn it all down.” Naomi Sayers, a Native American lawyer, said she would help defend “anyone charged with arson if they actually did burn things.” Statements like these reveal the anti-Christian hysteria motivating these attacks.

It is well-known that many traditions in the Catholic Church can be traced back to pagan cults, rites and deities. And it is also well-known that the Catholic Church has a long and checkered history with child abuse. But the arsonists attacking the Canadian government and burning down churches are not seeking to expose corruption in a school system that closed a generation ago. They are terrorizing Christian communities that had nothing to do with these abuses and lighting up the skyline with burning churches to tell the world that Canada’s history as a Christian nation has come to its end.

When Europeans arrived in British Columbia, the Native American tribes there still practiced chattel slavery, human sacrifice and ritual cannibalism. Yet the Canadian government did everything it could to educate and assimilate them into Canadian society. Not long ago, Prime Minister John Macdonald was esteemed as a sort of folk hero for everything he tried to do for the Native Americans. But last year, radical activists in Montreal pulled down a statue of Macdonald, calling him a white supremacist who attempted to convert children to Christianity. Now arsonists are indiscriminately burning down Anglican, Coptic and Catholic churches across Canada.

Canadian officials have apologized for abuses that took place, but the terrorists torching churches will not be satisfied until the last Christian recants his religion and becomes an atheist, Islamist or pagan. Like the California Department of Education, many Canadian leftists would rather their children chant to Aztec deities than belong to a Christian church. Leftist ideology began as a rebellion against Catholicism in the bloody streets of revolutionary France, but it morphed into an all-out assault on Western civilization and the biblical principles it was based upon. They know if they can burn down Canada’s churches, the nation’s connection to its history with God will be incinerated!

For information on how the American and Canadian people have a history with God stretching back centuries before they even discovered North America, please read “America’s 4,000-Year-Old History.”