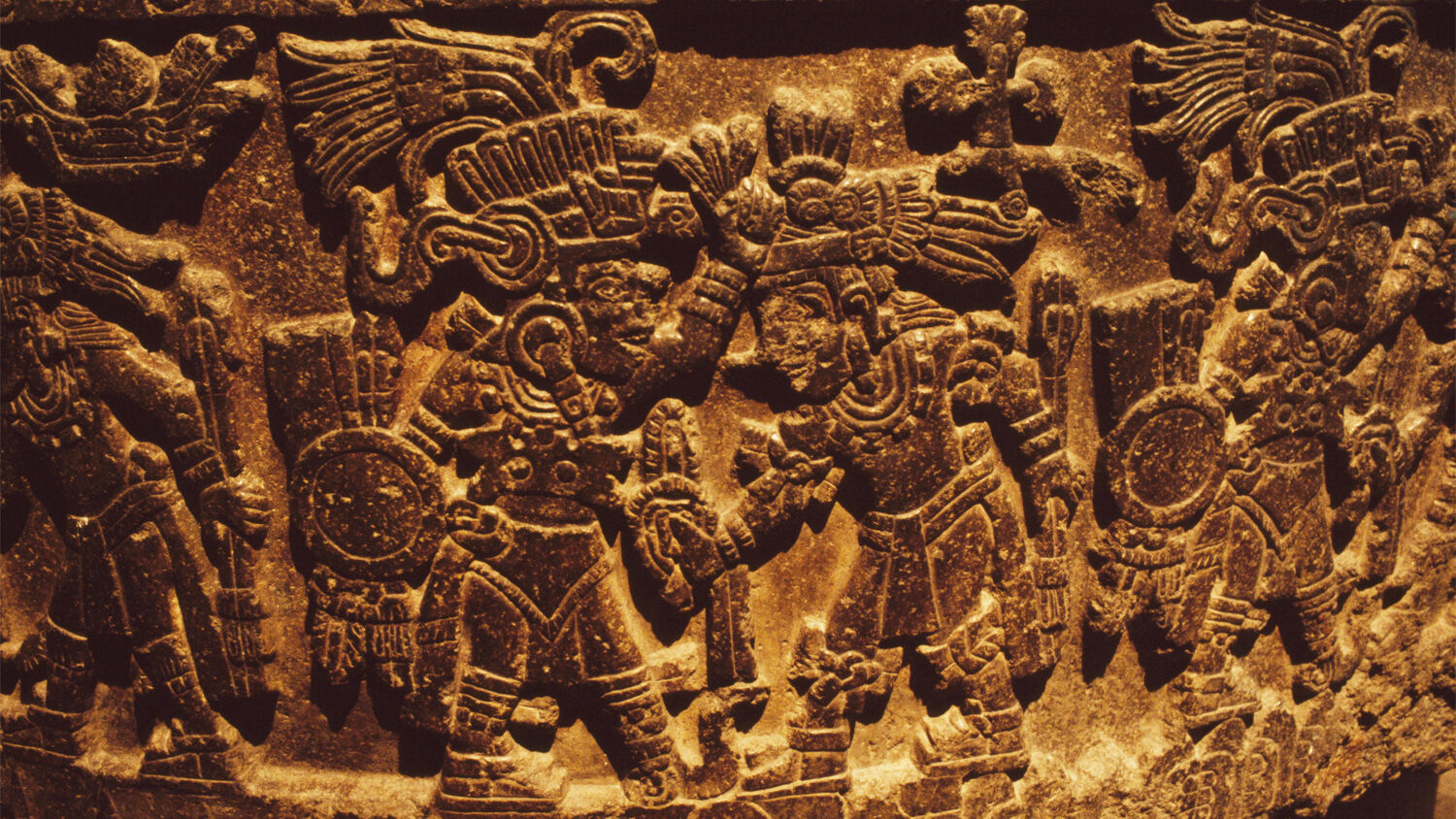 Depictions of Tezcatlipoca, detail of the relief on the Tizoc stone, found in Tenochtitlan
DeAgostini/Getty Images

The proposed ethnic studies curriculum encourages students to chant to the Aztec deity of human sacrifice.

California’s Department of Education voted on a new curriculum on March 18 that emphasizes the “struggles” of America’s ethnic minorities. Students will be taught to focus on certain ethnic minorities and pre-Columbian rituals.

The new curriculum emphasizes African-American, Chicano, Asian-American and Native American studies. The latest draft of the Ethnic Studies Model Curriculum states: “The focus on the experiences of these four disciplines provides an opportunity for students to learn of the histories, cultures, struggles and contributions to American society of these historically marginalized peoples which are often untold in [United States] history courses.”

Students are told to study the “imperialism, settler colonialism and genocide, both cultural and physical” of these racial minorities. Students are also taught to place greater value on pre-Columbian American culture. The curriculum would have students chanting to various Aztec deities as a way to build “unity.” Teachers would lead students in an “ethnic studies community chant,” in which students call on Aztec gods for the power to become “warriors” of “social justice.”

Teachers are instructed to lead students in a chant called “In Lak Ech,” which translates to “You Are My Other Me.” This chant begins by chanting and clapping to the Aztec deity Tezcatlipoca, who, according to Aztec tradition, was worshiped with cannibalism and human sacrifice. Students then chant to other Aztec deities, including Huitzilopochtli, the Aztec god of war. According to Aztec tradition, this deity inspired hundreds of thousands of human sacrifices. The chant ends with a fervent request for “liberation,” “transformation,” “decolonization” and “critical consciousness.”

“The chants have a clear implication: the displacement of the Christian [G]od, which is said to be an extension of white supremacist oppression, and the restoration of the indigenous gods to their rightful place in the social justice cosmology,” wrote Christopher Rufo, contributing editor with City Journal and director of the Discovery Institute’s Center on Wealth and Poverty. He continued:

California parents should be concerned. Under the guise of “equity” and “empowerment,” activists within the public education system have developed this radical new curriculum in order to transform California schools into factories for left-wing political activism. They have recast the United States as an oppressor nation that must be deconstructed and subverted through politics. The curriculum’s vision statement makes this aim explicit: It presents education not as a means of achieving competency, but as a “tool for transformation, social, economic, and political change, and liberation.”

The radical left seeks to indoctrinate the millions of students enrolled in California’s primary and secondary schools. The curriculum, according to Rufo, “seeks to extend the left’s cultural dominance of California’s public university system, 50 years in the making, to the state’s entire primary and secondary education system, which consists of 10,000 public schools serving a total of 6 million students.”

For over 60 years, educator Herbert W. Armstrong warned of the Communist infiltration of education. In 1956, Mr. Armstrong described a “new kind of warfare,” writing:

It’s a kind of warfare we don’t understand, or know how to cope with. It uses every diabolical means to weaken us from within, sapping our strength, perverting our morals, sabotaging our educational system, wrecking our social structure, destroying our spiritual and religious life, weakening our industrial and economic power, demoralizing our armed forces, and finally, after such infiltration, overthrowing our government by force and violence! All this, cleverly disguised as a harmless political party! Communism is worldwide psychological warfare!

The Trump administration’s 1776 Commission report was a noble attempt to correct the Communist indoctrination in America’s schools. But it’s too late to reverse the decades of leftist teaching. On his very first day in office, Joe Biden signed an executive order abolishing the 1776 Commission. The radical left hated that report because it exposed their use of education as a way to indoctrinate people.

Education is extremely important because it has a huge bearing on the quality and direction of a nation. Mr. Armstrong repeatedly emphasized the importance of education. In the December 1965 issue of the Plain Truth, he wrote: “The future welfare and even the existence of civilization is dependent on the educational system.” In that issue, Mr. Armstrong stressed the need for Bible-based education, writing: “The Bible is not a book of sentimental religion, as most people think of religion. It contains the foundation of all knowledge—whether of science, of history, of psychology, of genetics, of sound business principles, of health, of international relations, of government, of family relations, of sex, of social science—the basis and the foundation of all branches of knowledge.”

The Apostle Paul wrote centuries ago of the consequences of departing from Bible-based education. He warned that education based on human tradition instead of the Bible ultimately results in the worshiping of evil spirits: “See to it that no one takes you captive by philosophy and empty deceit, according to human tradition, according to the elemental spirits of the world, and not according to Christ” (Colossians 2:8; English Standard Version).

Modern education fails to answer life’s most important questions. Curricula today are mainly focused on how to make a living, failing to teach the biblical principles that lead to living a quality life. By neglecting to teach Bible-based principles, schools can eventually end up worshiping demons!

This free book has been read by millions since its release in 1985. In the Introduction, he wrote: “The real cause of all this world’s religious confusion—and all its evils—are revealed in seven basic mysteries that decry this Babylon of religious confusion and the resulting world chaos!”

Mr. Armstrong accurately warned of the rise of deceit in modern education. He also wrote about a time soon when true, Bible-based education will fill this Earth (Isaiah 11:9; Habakkuk 2:14). “But now God’s time has come!” he wrote. “He now sends a voice to cry out with amplified world-covering power to reveal the way out of this senseless madness, into the world of peace and righteousness that soon shall grip the Earth!”