For thousands of years, people have gathered at sunrise on Sunday to worship. Even before the Catholic Church began, Romans would face the east and worship the rising sun. That pagan sun worship is, in fact, the origin of the name Sunday, just as the name Thursday refers to the worship of the Norse god Thor. 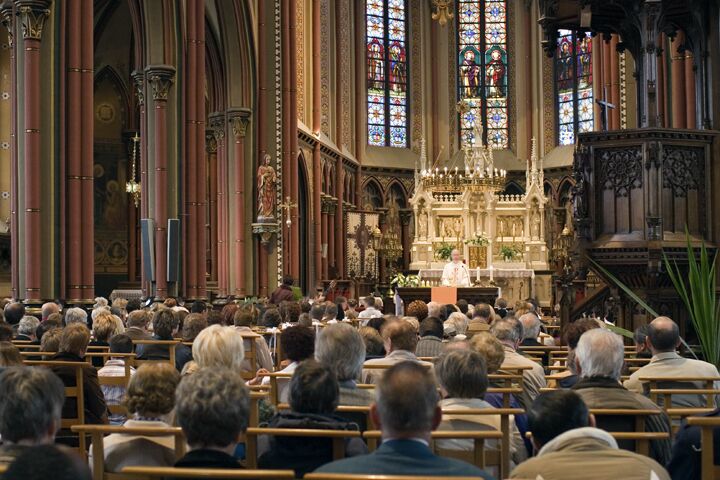 For thousands of years, people have gathered at sunrise on Sunday to worship. Even before the Catholic Church began, Romans would face the east and worship the rising sun. That pagan sun worship is, in fact, the origin of the name Sunday, just as the name Thursday refers to the worship of the Norse god Thor.

In Old Testament times it would have been clear to everyone that God’s followers rested on the Sabbath—the seventh day of the week—and pagans who worshipped the creation observed the first day of the week in honor of the sun.

How then—and by what authority—does virtually every church keep Sunday as the sabbath today? Was the day of worship changed by Jesus Christ, who called Himself “Lord of the Sabbath” in Mark 2:28? Or perhaps by the apostles? Is there any biblical command for true Christians to worship on Sunday? And if not, where does that authority come from?

The Origins of the Two Days

The origins for both Sunday and Saturday worship are found in the first two chapters of Genesis. On the first day of the week, the great Creator God separated the day from the night, saying “Let there be light.” At this point, light was visible from the Earth. Thus the link with Sunday worship: Pagans have worshipped the creation—and specifically its main source of light—rather than its Creator throughout history. Even today, religious leaders hearken back to the creation to support Sunday worship. At a mass in 2007, Pope Benedict xvi said Sunday calls to mind “the day of the dawning of creation” and is therefore “the church’s weekly feast of creation.”

No one disputes the sanctity of Saturday as the Sabbath in the Old Testament. Almighty God gave its observance as the Fourth Commandment in Exodus 20. (And Jesus Christ often verified the eternally binding nature of the Ten Commandments—e.g. Matthew 5:17-19; 19:17-19.)

Then, as part of a special and separate covenant with Israel, God said the Sabbath would be a sign forever: “It is a sign between me and the children of Israel for ever: for in six days the Lord made heaven and earth, and on the seventh day he rested, and was refreshed” (Exodus 31:17).

The Bible itself offers no sanction for Sunday worship—more on this later—and many churches know this. We turn first to the historical record, which clearly shows when the day of observance was changed, exactly who changed it, and how it was enforced.

At the time of Christ, only pagans—specifically, the Roman Empire—worshipped on Sunday. By a.d. 230, however, Catholics were divided on which day they should observe. One early Catholic, Origen, wrote: “But what is the feast of the Sabbath except that of which the apostle speaks, ‘There remaineth, therefore, a Sabbatism,’ that is, the observance of the Sabbath by the people of God? Leaving the Jewish observances of the Sabbath, let us see how the Sabbath ought to be observed by a Christian. On the Sabbath day all worldly labors ought to be abstained from. If, therefore, you cease from all secular works, and execute nothing worldly, but give yourselves up to spiritual exercises, repairing to church, attending to sacred reading and instruction … this is the observance of the Christian Sabbath.” At that time, this Catholic leader was referring to the seventh day of the week.

Enforced Sunday worship began with the Roman Empire, specifically Constantine. In a.d. 321, Constantine issued an edict forbidding work on “the venerable day of the sun”—Sunday. In a letter following the Nicene Council of a.d. 325, Constantine spoke of the enforcement of Sunday worship for Easter services: “At this meeting the question concerning the most holy day of Easter was discussed, and it was resolved by the united judgment of all present that this feast ought to be kept by all and in every place on one and the same day.” In other words, Easter was to be kept on Sunday, and the Jewish observance of Passover was expressly forbidden.

To those who ignored the decrees of the Nicene Council, Constantine wrote, in another letter regarding Sabbath worship, “Forasmuch, then, as it is no longer possible to bear with your pernicious errors, we give warning by this present statute that none of you henceforth presume to assemble yourselves together. We have directed, accordingly, that you be deprived of all the houses in which you are accustomed to hold your assemblies: and our care in this respect extends so far as to forbid the holding of your superstitious and senseless meetings, not in public merely, but in any private house or place whatsoever. Let those of you, therefore, who are desirous of embracing the true and pure religion take the far better course of entering the Catholic Church …. [F]rom this day forward none of your unlawful assemblies may presume to appear in any public or private place. Let this edict be made public.”

After Constantine gave his edict, worship on any day except Sunday became illegal. Almost 40 years later, in a.d. 363, the Council of Laodicea determined, “Christians must not Judaize by resting on the Sabbath [that is, Saturday], but must work on that day, rather honoring the Lord’s day …. But if any shall be found to be Judaizers, let them be anathema [cursed and excommunicated] from Christ.”

At the Council of Tours in a.d. 1163, Pope Alexander III made this decree: “Whereas a damnable heresy has for some time lifted its head in the parts about Toulouse, and already spread infection through Gascony and other provinces, concealing itself like a serpent in its folds; as soon as its followers shall have been discovered, let no man afford them refuge on his estates; neither let there be any communication with them in buying and selling: so that, being deprived of the solace of human conversation, they may be compelled to return from error to wisdom.”

Historically speaking, there is no question as to who changed the day of worship. It was the Catholic Church, enforced by the Roman Empire.

The Catholic Doctrinal Catechism states this directly: “Question: Have you any other way of proving that the church has power to institute festivals of precept? Answer: Had she not such power, she could not have done that in which all modern religionists agree with her, she could not have substituted the observance of Sunday, the first day of the week, for the observance of Saturday, the seventh day, a change for which there is no scriptural authority.” Catholics identify the changing of the day of worship as a sign of Catholic authority!

Catholics, in fact, feel the Protestants should keep the Sabbath as long as they reject the authority of Rome. The Catholic Doctrinal Catechism further states: “Question: When Protestants do profane work upon Saturday, or the seventh day of the week, do they follow the Scripture as their only rule of faith? Do they find this permission clearly laid down in the Sacred Volume? Answer: On the contrary, they have only the authority of tradition for this practice. In profaning Saturday, they violate one of God’s commandments, which He has never abrogated—‘Remember thou keep holy the Sabbath day.’”

Some Protestants admit this. Martin Luther himself wrote in Against the Celestial Prophets: “Indeed, if [sabbatarian Andreas] Carlstadt were to write further about the Sabbath, Sunday would have to give way, and the Sabbath—that is to say, Saturday—must be kept holy.” In his Larger Catchism, Luther wrote that “to avoid the unnecessary disturbance which an innovation would occasion, it [the day of worship] should continue to be Sunday.” He simply accepted Catholic doctrine, which he knew had no scriptural authority.

Methodists, the Church of England, and Presbyterians also have documents acknowledging that there is no scriptural authority for Sunday worship.

If you read the New Testament from Matthew to Revelation, you’ll read the phrase “first day of the week” eight times (and the word “Sunday” zero times), and none of these passages speak of Sunday worship. Herbert Armstrong examined each of these passages in detail in Which Day Is the Christian Sabbath?, which we will be happy to send you upon request.

Many point to an Easter sunrise as authority for Sunday worship. In brief, Jesus Christ only offered one sign of His Messiahship: that, like Jonah (Jonah 1:17), He would remain in the grave for three days and three nights. Ever since, mankind has been trying to squeeze three days and three nights into a barely 36-hour period between Friday evening and Sunday morning.

Like Sunday observance, the sunrise Easter service has pagan origins. You can prove that God commands us to observe Christ’s death, not His birth (request our free reprint article “The Resurrection Was Not on Sunday” for more information).

What will you do? The Almighty God gave this command: “Remember the sabbath day, to keep it holy” (Exodus 20:8). The patriarchs, ancient Israel, Jesus Christ, the disciples, the Apostle Paul, and God’s true Church all kept it as He commanded. All worshipped the Creator of the universe instead of the work of His fingers. What will you do?