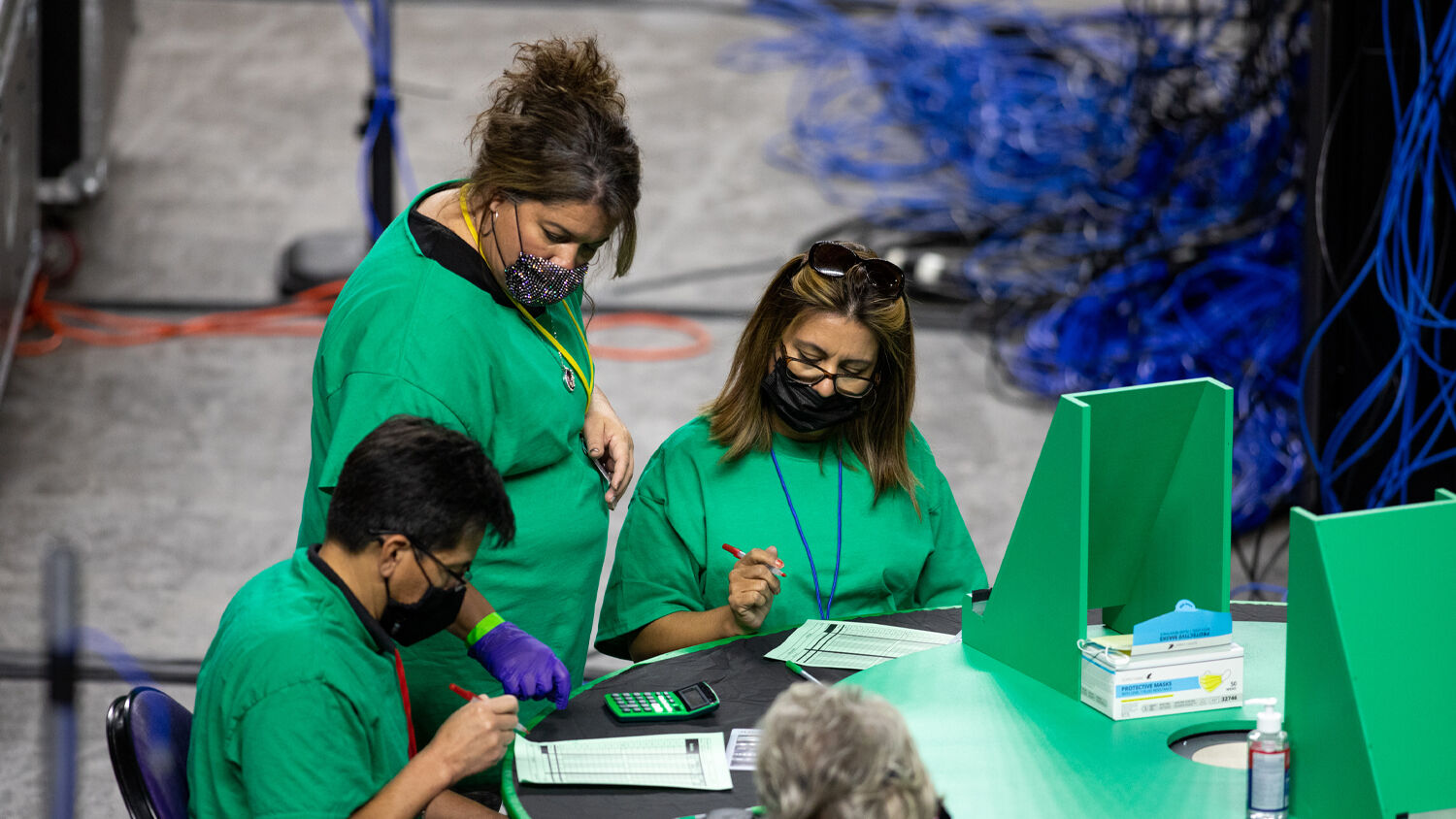 Contractors working for Cyber Ninjas examine and recount ballots from the 2020 general election on May 3 in Phoenix, Arizona.
Courtney Pedroza for the Washington Post via Getty Images

The American people no longer control their own elections.

The American people no longer control their elections. Instead, a clique of technology executives has seized the power to pick America’s leaders without having to reveal the inner workings of their electronic voting machines. On July 23, the Arizona State Senate issued subpoenas commanding the Maricopa County Board of Supervisors and Dominion Voting Systems to provide records, ballots, network data logs, electronic access and any other information necessary to audit the 2020 presidential election. Both entities defied the subpoenas.

“Dominion is not a public officer or public body and, therefore, has no obligation to make its records available for public inspection,” wrote Dominion president John Poulos in his refusal. “Relatedly, Dominion’s privately owned security keys and confidential passwords are not ‘public records’ subject to disclosure under the law.”

In other words, since Dominion Voting Systems is a Canadian company privately owned by a Wall Street investment firm cofounded by colleagues of George Soros in the shadowy Carlyle Group, they do not have to prove that they accurately tabulated people’s votes to the elected representatives of the Arizonan people.

Elsewhere, Dominion said the Arizona State Senate subpoena violated its constitutional rights against unreasonable search and seizure, and that Dominion only provides security keys and passwords to “authorized recipients” that are “specifically approved by the U.S. Election Assistance Commission.” Never mind that the Elections Clause of the United States Constitution directs and empowers the individual states to determine the “times, places and manner” of elections, Dominion only cooperates with the Biden administration.

An increasing amount of evidence shows that Dominion is defying the Arizona State Senate because it has something to hide. Poulos has sworn under oath that Dominion had no way to remotely access its voting machines during the election. Yet on August 2, Ron Watkins, a former site administrator of the imageboard website 8chan, released several photocopies from an alleged Dominion whistleblower showing that Poulos lied. Dominion had the ability to remotely access its equipment while the election was ongoing.

The Gateway Pundit has published these documents. If they can be verified as authentic, then John Poulos is definitively guilty of perjury and Dominion Voting Systems may end up guilty of election theft.

The former director of the U.S. Cybersecurity and Infrastructure Security Agency, Chris Krebs, has assured the American people that the 2020 presidential elections were “the most secure in American history.” Yet voting machines produced by companies like Dominion have made elections easier to rig than ever before.

For most of U.S. history, votes were counted by hand or with a mechanical adding machine. That made America’s elections hard to rig. Any attempt to steal an election necessarily had to involve collaboration between hundreds of operatives spread throughout voting precincts across the nation. Only in instances where the election was virtually a tie (like in the 2000 U.S. presidential election between George Bush and Al Gore) could stolen or disputed votes in a small number of counties make a difference.

But now, more than 90 percent of voters use machines manufactured by only three companies: Dominion Voting Systems, Election Systems & Software and Hart InterCivic. That means malfunctioning—or malicious—hardware or software in the machines these companies produce could dramatically change the results of an election—and it would only take a small number of people to pull off such a heist. Before the liberal media coronated Joe Biden as the “winner” of the 2020 election, even prominent Democrats were warning that “trouble-plagued companies” like Dominion Voting Systems could subvert American democracy.

Finnish data-security expert Harri Hursti was featured in Hacking Democracy, a 2006 Emmy-nominated documentary that exposes previously unknown backdoors in the software of voting machines made by Diebold Election Systems. After this documentary was released, Diebold changed its name to Premier Election Solutions. In 2009, Election Systems and Software purchased Premier and sold its primary assets to Dominion.

A spokesman for Dominion told the Wall Street Journal that the weaknesses Hursti uncovered were fixed in 2012. But Hursti says he tested the updated software and found it too was vulnerable.

In the 2020 hbo documentary Kill Chain: The Cyber War on America’s Elections, Hursti demonstrated that by modifying a few lines of code on a Dominion machine’s removable memory card, he could alter the results. So Dominion machines could have been used to steal the election from President Donald Trump, but we cannot determine whether they were used to steal the election until investigators get security keys and passwords.

The idea that the most powerful nation on Earth could have its elections hacked may sound shocking, but a sobering Bible prophecy reveals that this level of corruption will exist in the end time. The Prophet Isaiah wrote, “Ah sinful nation, a people laden with iniquity, a seed of evildoers, children that are corrupters: they have forsaken the Lord, they have provoked the Holy One of Israel unto anger, they are gone away backward. Why should ye be stricken any more? ye will revolt more and more: the whole head is sick, and the whole heart faint. From the sole of the foot even unto the head there is no soundness in it; but wounds, and bruises, and putrifying sores: they have not been closed, neither bound up, neither mollified with ointment” (Isaiah 1:4-6).

Yet another prophecy reveals that God will pass by end-time Israel (the United States and Britain primarily) one last time so people have a chance to repent of this spiritual sickness. “And the Lord said unto me, Amos, what seest thou? And I said, A plumbline. Then said the Lord, Behold, I will set a plumbline in the midst of my people Israel: I will not again pass by them any more: And the high places of Isaac shall be desolate, and the sanctuaries of Israel shall be laid waste; and I will rise against the house of Jeroboam with the sword” (Amos 7:8-9).

In his article “Why I Believe Donald Trump Is Still Coming Back,” Mr. Flurry explained that President Trump is actually an end-time type of King Jeroboam ii, which means God is going to pass by America one last time. God will temporarily spare America from punishment, saving it by the hand of Donald Trump (2 Kings 14:26-27).

President Trump will regain power in America, possibly by exposing massive election fraud. “God is invested in this,” Mr. Flurry wrote. “I still believe He is about to do some massive exposing of how the election was stolen and other crimes the radical left is committing.” The legal battles on the horizon between Dominion and the states trying to audit their election results may be the way much of this corruption is exposed.