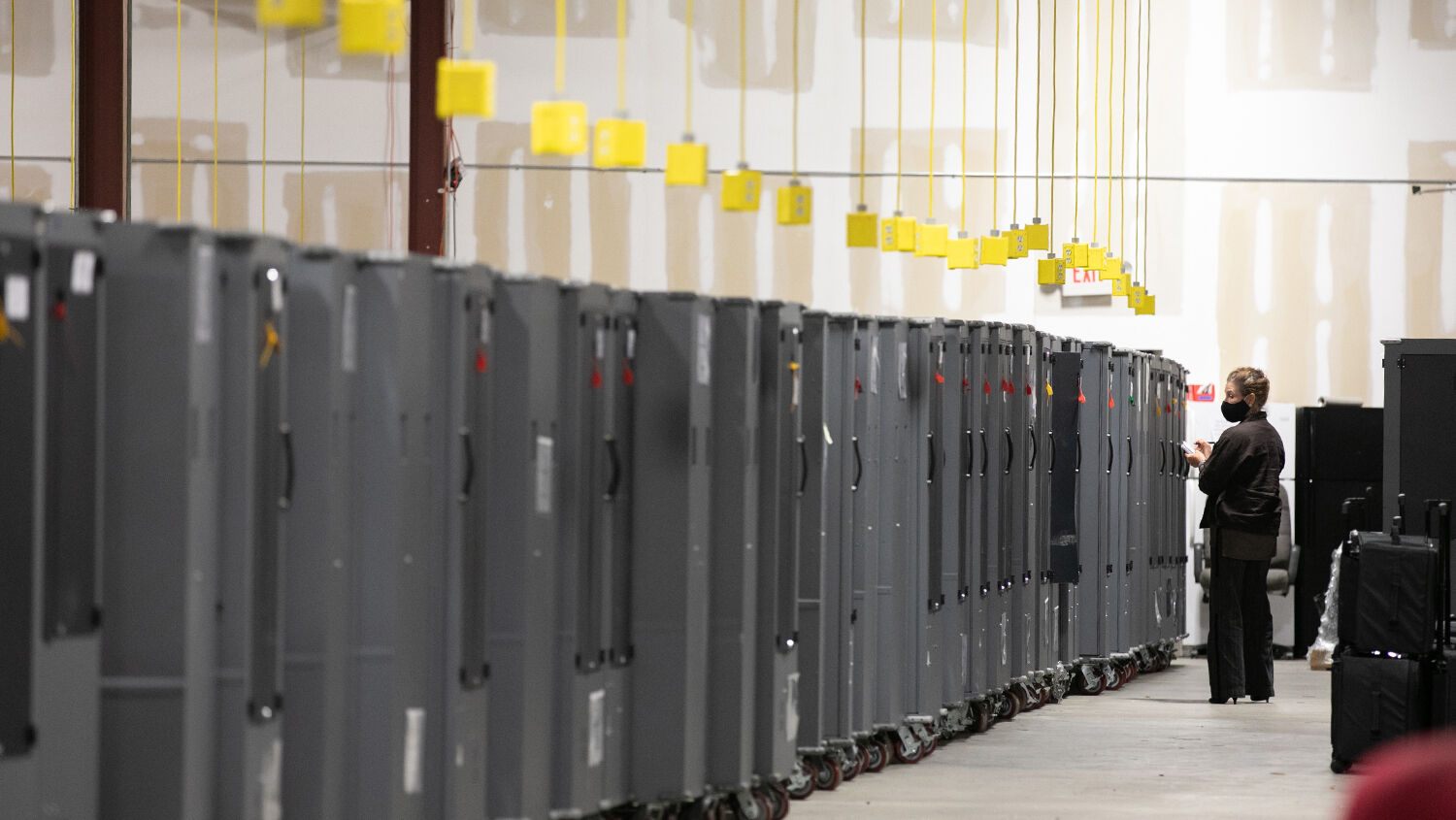 Prominent Democrats warned that voting machines were vulnerable to hacking—until they won.

The controversy over the 2020 presidential election is heating up again. Yesterday the Arizona State Senate issued subpoenas commanding the Maricopa County Board of Supervisors and Dominion Voting Systems to provide records, ballots, electronic access and any other information necessary to audit the election, and to appear before the Senate on August 2.

This comes after a Delaware court issued subpoenas to attorneys Rudy Giuliani and Sidney Powell and to businessman Mike Lindell on behalf of Dominion Voting Systems. Giuliani, Powell and Lindell were among those who exposed Dominion’s voting fraud, as well as its ties to scandal-plagued, private equity firms with a vested interest in forcing President Donald Trump out of office. Dominion, one of three companies controlling 90 percent of electronic voting in America, claims these three knowingly spread a “big lie” about their machines facilitating election fraud. It is seeking $1.3 billion in damages from each defendant. Yet as Dominion Voting Systems and its allies in the Democratic Party and the propaganda media gear up for a legal assault on those who allege voter fraud, remember that, until quite recently, it was prominent Democrats who were alarmed at the likelihood these machines would be used for election fraud.

In Kill Chain: The Cyber War on America’s Elections, Finnish data-security expert Harri Hursti demonstrated that he could modify a few lines of code on a Dominion machine’s removable memory card and alter the results of an election. hbo released this documentary not a decade ago or even four years ago but in March 2020!

“We are particularly concerned that secretive and ‘trouble-plagued companies,’ owned by private equity firms and responsible for manufacturing and maintaining voting machines and other election administration equipment, ‘have long skimped on security in favor of convenience,’ leaving voting systems across the country ‘prone to security problems,’” the Democrats wrote in the letter. “Election security experts have noted for years that our nation’s election systems and infrastructure are under serious threat.”

In 2016, Hillary Clinton, the Democratic nominee for president, said, “You can run the best campaign, you can even become the nominee, and you can have the election stolen from you.” Democrats then launched a massive campaign of accusation, falsification of evidence, and spying on Donald Trump that continued even after he became president. In 2019, Rep. Adam Schiff, another Democrat, warned that the upcoming presidential election would be “enormously vulnerable” to hacking and foreign influence. Rep. Sheila Jackson Lee, another Democrat, said researchers had “repeatedly demonstrated that ballot recording machines and other voting systems are susceptible to tampering.” Rep. Val Demings, another Democrat, said that “hackers with limited prior knowledge, tools and resources are able to breach voting machines in a matter of minutes.” Rep. Jennifer Wexton, another Democrat, warned that “voting machines in Georgia and Texas deleted votes for certain candidates or switched votes from one candidate to another.” Rep. Ted Lieu, another Democrat, warned that “in a close presidential election, they just need to hack one swing state, or maybe one or two—or maybe just a few counties in one swing state.”

Even Sen. Kamala Harris, another Democrat, warned that “there are a lot of states that are dealing with antiquated machines, right, which are vulnerable to being hacked.” She also said, “I actually held a demonstration for my colleagues here at the Capitol where we brought in folks who, before our eyes, hacked election machines—those that are being used in many states.”

Harris moved into the vice president’s residence in an election full of paper ballot voter fraud and electronic voter fraud!

Democrats insisted that the election was secure prior to 2016 when they thought Hillary Clinton would win. After Donald Trump won, Democrats blasted the use of easily hacked voting machines, especially as they tried to delegitimize Republicans in the 2018 midterm elections and most of all as they tried to delegitimize Donald Trump as he was about to win the 2020 presidential election.

But then the strategy changed: Win the election at all costs—even if it meant mail-in ballots and falsification of paper ballots and electronic ballots on such a massive scale that it simply could not be hidden.

Then came Tuesday, Nov. 3, 2020: Even with a good amount of fraud underway, on top of the voting fraud that has occurred in Democrat-controlled areas for decades, Donald Trump was still winning. Highly unusual halts were called to the vote counting in multiple states—which just happened to be swing states that would determine the outcome of the election.

As the hours and days dragged on, Democrats and their supporters had cobbled together 78 million mail-in, regular and electronic ballots for Joe Biden, a gaffe-prone 47-year career “swamp” politician who conducted his presidential campaign largely from his basement and whose few in-person events drew few supporters—more votes than any American presidential candidate in history!

This highly suspect, clearly fraudulent result put the Democrat media complex in an indefensible position, in terms of credibility. Yet they steamrolled ahead, pretending like all their warnings against potential election fraud and the actual, massive, obvious election fraud that had just occurred in front of the whole world never happened. They had to in order to stop Donald Trump and coronate Joe Biden and—ironically—Kamala Harris.

Now Democrats in politics and the media colluded to build a new narrative: Only right-wing conspiracy theorists would dare suggest that the voting machines could have been hacked! This was the most secure election in American history! People who demand proof should be sued for $1.3 billion!

Why the abrupt change? They are terrified evidence will finally emerge that the voting machines were actually used to fraudulently install a Democrat pretender to the throne in the White House!

Arizona has conducted a forensic audit on the paper ballots from the election and found that many were tampered with. Other states are wanting to conduct their own forensic audits. The Democrat media complex and even Fox News (which called Arizona very early for Biden) is trying to downplay these audits. But people across the nation want to know if their votes were counted accurately or if powerful radicals stole their government from them!

You would think one thing even corrupt politicians and elites would draw the line at would be counting votes accurately and proving that votes were counted accurately. But Americans live in a nation where the exact same politicians who warn about voting machine vulnerabilities a few months before an election pretend the exact opposite is true as soon as their candidate is elected by those same machines.

“When the real numbers are released, people will be shocked,” wrote President Donald Trump in a statement. “[T]his is a concerted effort of the Fake News Media to discredit and demean. There has never been anything like it. Numbers will be released shortly, and they are extraordinarily big and highly determinative!”

Keep your eyes on Arizona!

Meanwhile, the controversy in another swing state, Georgia, is heating up. Georgia Secretary of State Brad Raffensperger is now calling for the firing of Fulton County election officials because new evidence indicates that at least 10,300 illegal votes were cast in Georgia in the 2020 presidential election. Since Donald Trump only lost Georgia by about 12,000 votes, it is highly likely that he actually won Georgia. You can see why other states now want to examine their vote tallies.

It’s like President Trump said during his recent meeting with Texas Gov. Greg Abbot and other U.S. leaders at the U.S.-Mexico border: “We have a sick country in many ways. It’s sick in elections, and it’s sick on the border. If you don’t have good elections and if you don’t have a strong border, you don’t have a country.”

Bible prophecy shows that President Trump is right about America being “a sick country in many ways.” Concerning the end-time nations of Israel (which includes the U.S. and Britain primarily), the Prophet Isaiah wrote, “Ah sinful nation, a people laden with iniquity, a seed of evildoers, children that are corrupters: they have forsaken the Lord, they have provoked the Holy One of Israel unto anger, they are gone away backward. Why should ye be stricken any more? ye will revolt more and more: the whole head is sick, and the whole heart faint. From the sole of the foot even unto the head there is no soundness in it; but wounds, and bruises, and putrifying sores: they have not been closed, neither bound up, neither mollified with ointment” (Isaiah 1:4-6).

My father, Trumpet editor in chief Gerald Flurry, explains in his book Ezekiel—The End-Time Prophet that these verses mean America’s power structures are terminally ill from top to bottom. This is why a cabal of shadowy technology executives is able to use ballot stuffing, digital election rigging and other forms of fraud to install an illegitimate regime. A prophecy in Amos 7 indicates that God will pass by America one last time so that people have a chance to repent of their spiritual sickness and sins. This is the root cause of our deep-seated governmental corruption.

“And the Lord said unto me, Amos, what seest thou? And I said, A plumbline. Then said the Lord, Behold, I will set a plumbline in the midst of my people Israel: I will not again pass by them any more” (Amos 7:8).

“We have been watching this prophecy since June 1990, in the second issue of the Trumpet we ever produced,” my father wrote in his article “Why I Still Believe Donald Trump Is Coming Back.” “It speaks of a time when God is preparing to measure the destruction of end-time Israel—the United States and Britain—and He says, ‘I will not again pass by them any more’ (verse 8). This is just before severe correction comes on these nations if they don’t repent. They are receiving their final warning. … So the entire context of God saying I will not again pass by them anymore is the time of ‘Jeroboam’—an end-time antitype of King Jeroboam ii of Israel.”

This prophecy is why we continue to insist that President Trump will return to power. We do not know exactly how this will unfold, but keep watching the Dominion Voting Systems lawsuit against Rudy Giuliani, Sidney Powell and Mike Lindell. And keep watching the forensic audits in Maricopa County, Fulton County and other counties around the nation. There is a good chance that nation-shaking election fraud will be exposed this summer!