Topple your history, destroy your liberty. 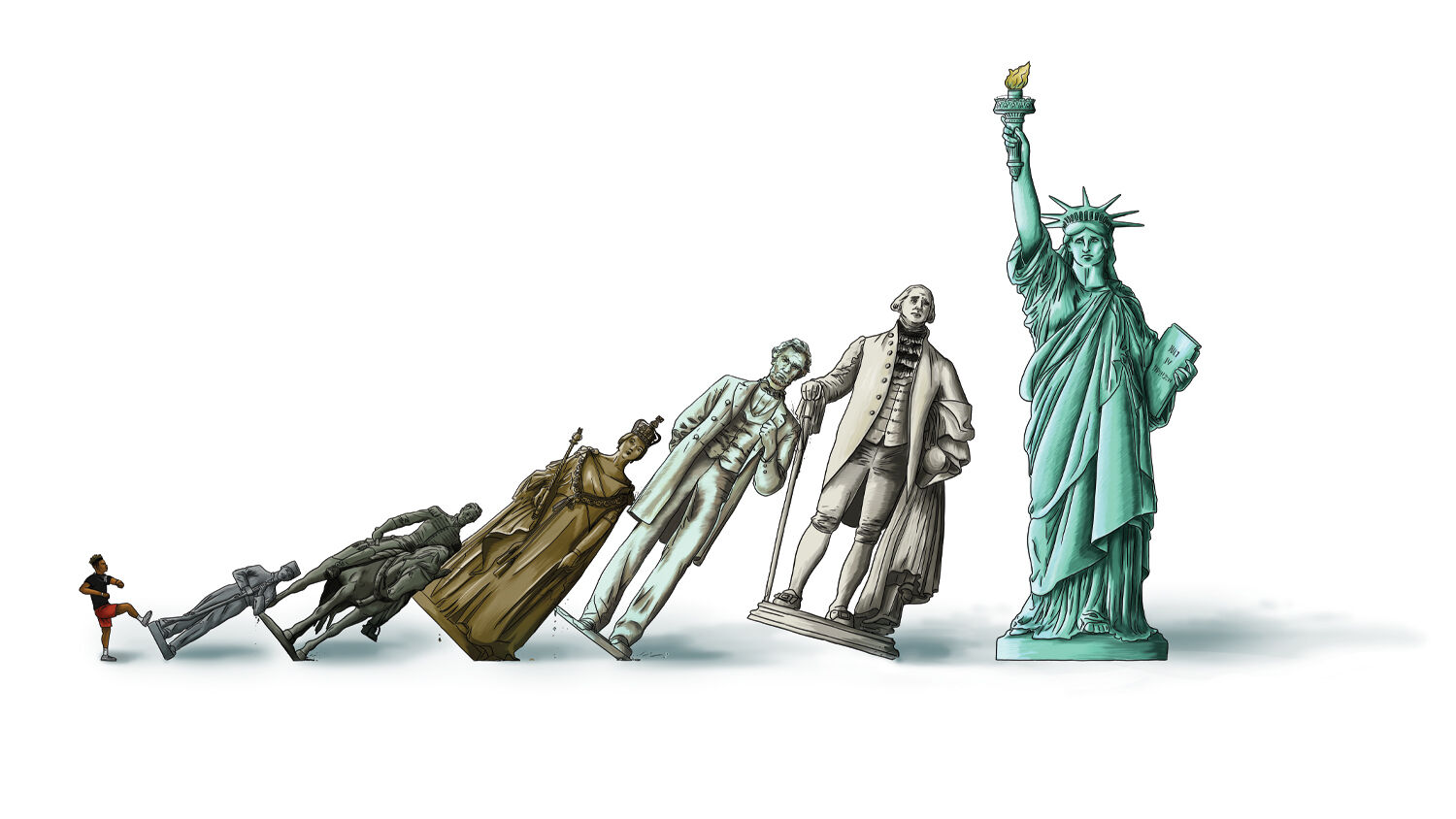 Topple your history, destroy your liberty.

July is a month of anniversaries in North America. On July 1, Canada celebrates its founding as a self-ruling country within the British Empire. On July 4, America celebrates its independence from Great Britain. For most countries, national holidays are times of celebration. But this year, Independence Day and Canada Day have never been more controversial.

The Fourth of July

Here are some headlines published by major media outlets ahead of this year’s Independence Day: “The Willful Self-Delusion of American Independence Day” (Nation), “A Fourth of July Symbol of Unity That May No Longer Unite” (New York Times), “The Culture War Has a New Target: Independence Day” (19FortyFive), “Squad Member Says Fourth of July Is About Freedom ‘for White People’” (Washington Examiner). National Geographic posted on social media that air pollution from Fourth of July fireworks displays “disproportionately” affects the health of “vulnerable people and communities of color.”

Radical leftists are changing July 4 from a celebration that brings Americans together to an opportunity to say America was racist from its birth and should not be celebrated.

One of the main organizations responsible for preserving American history, the United States National Archives and Records Administration, declared in an April 10 report that it is, itself, racist. The report suggested that the administration “reimagine the Rotunda,” the main public room in the National Archives Building in Washington, D.C., visited by many tourists each year. It displays some of the most precious treasures of American heritage, including the Declaration of Independence, the United States Constitution and the Bill of Rights. The walls are decorated with the Faulkner Murals, painted between 1935 and 1936, portraying allegorical scenes of the Founding Fathers. All of this, according to the report, is offensive. America’s founding history needs “reimagining.”

Documents like the Constitution and the Bill of Rights enabled the U.S. to become an astonishingly free society for all races. Men like George Washington, Thomas Jefferson and James Madison were the architects of those documents. Yet a movement is gathering strength that twists the best parts of American history into some of the world’s greatest evils.

Canada is in the midst of the same reevaluation. In June, the city of Victoria, British Columbia, announced it would not commemorate Canada Day this year. The decision came after the discovery of the unmarked graves of 215 children in northern British Columbia on the premises of a former residential school. Victoria’s government claims celebrating Canada’s founding would insult First Nations (or Indians).

“The history of our country’s genocidal relationship with First Nations has been once again revealed in a way that is painful for the Lekwungen people as well as First Nations across the country,” wrote Victoria Mayor Lisa Helps. Helps also refused to give the traditional oath of loyalty to Queen Elizabeth ii on her inauguration. She said doing so would disrespect First Nations’ land rights.

On Canada Day, a more violent episode took place in Winnipeg, Manitoba. A group of protesters pulled down the statue of Queen Victoria in front of the Manitoba Legislature. The group of about 200 individuals was protesting the effect residential schools had on indigenous people and chanted, “No pride in genocide.” They covered Victoria in red paint and wrote in red graffiti “we were children once” on the pedestal. They removed the statue’s head and threw it into the river behind the legislature. Meanwhile, protesters near the Governor’s House tore down a statue of Queen Elizabeth ii.

Also on Canada Day, in Kitchener, Ontario, one man splashed red paint on the statue of Queen Victoria located in Kitchener’s Victoria Park. The man climbed the statue and protested for five hours.

Canada’s residential school system was created to help indigenous tribes assimilate into the nation’s European-style society and give children a basic academic education. The government joined the Catholic Church, the Anglican Church, the Presbyterian Church and other groups to administrate the schools, much like the missionary model of schooling. Government and social service workers often forcibly removed children from their families and compelled them to attend the schools. About 150,000 indigenous children were placed into the schools, and an estimated 6,000 died while attending them.

What happened to these many children and their families is indeed tragic. But why attack the memory of Queen Victoria? She had no direct responsibility in these policies or in the deaths of the children, and some of her policies heavily benefited Canada’s indigenous populations. Yet liberals attack her as a symbol of “white colonialism.”

Queen Victoria approved the creation of what is now the Royal Canadian Mounted Police, which prevented lawlessness as the Canadian West developed and, in fact, protected indigenous tribes. It supplied a way to deal lawfully and fairly with them, protect them from more aggressive European settlers, and even provide for them. Many mounted police forts handed out rations that saved indigenous people from starvation. The rule of law in the West also helped create an overall ordered society in which improvements like the Canadian railway could be built and the land could be developed.

Yet many activists have used what little they have learned about some of the worst aspects of history—or history that is completely false—as an excuse to attack Queen Victoria as a symbol of genocide.

Where does this irrational hatred come from that despises the history and existence of America and Canada and the best aspects of these societies?

In The United States and Britain in Prophecy, Herbert W. Armstrong proved that America and the British Commonwealth (including Canada) descended from the ancient Israelites. The birth of the United States on July 4, 1776, directly fulfilled God’s promise to the patriarch Abraham that He would make his descendants into “a great nation.” The U.S. is the mightiest, wealthiest and (aside from its predecessor, ancient Israel) the freest nation in world history.

“And so now, as God had started the whole world with one man, He started His own peculiar nation in the world from one single man—Abraham,” Mr. Armstrong wrote. “As the world, which has strayed far from God and the blessings of God’s worship and rule, was started with one man who rebelled against God and rejected His rule, so God’s own flesh-born nation, from which is to be reborn the Kingdom of God, was started with one man who obeyed God without question, and accepted His divine rule” (The United States and Britain in Prophecy; emphasis added).

All human beings and nations are rife with problems. The only solution is the administration of God’s principles, law and government. Through the modern descendants of Abraham in Britain and America, God established some of those principles, which led to unparalleled blessings and fulfillment of His promises and prophecies. But a radical movement is underway to blot out those principles and history.

Yet God’s plan continues beyond Britain and America. The Bible prophesies that God will literally, supernaturally replace the governments of this world with the government of God (Daniel 2:44; Revelation 11:15). He will intervene to stop human beings and human governments from destroying the human race (Matthew 24:21-22). Through right government, the literal government of God on Earth, God will establish and enforce His principles and laws. The result will be peace and happiness for all peoples and races. That is the message revealed in the history of the descendants of Abraham, that is what the Kingdom of God truly is, and that is the gospel Jesus Christ proclaimed when He was on Earth (Mark 1:14-15).

The Kingdom of God will be born from Israel not because Israelites are superior to other peoples—common sense and abundant Bible history make that clear. It will be born from Israel because that is the means by which God plans to bring all human beings who are willing, of all nations and races, into His eternal family—including those thousands of indigenous children and the myriad others who have died throughout history!

Whether they realize it or not, people who attack the very existence and fundamental principles of America and Canada are attacking the plan of God.

“There is an unseen reason why troubles are intensifying as never before,” writes Trumpet editor in chief Gerald Flurry in his free booklet America Under Attack. “You cannot understand events without recognizing this truth. … It has affected the United States [and Canada] in a massive way. … It is an assault by an invisible force—a force that is very real and deadly dangerous.”

Attacks on the good aspects of American, British and Canadian history seem bizarre indeed, until you understand the “unseen reason.”

America Under Attack
Are you concerned about where the current administration is leading this country? Whether the nation can survive the next four years? It’s worse than you think, and there is only one way to solve this gigantic problem.
From The September 2021 Philadelphia Trumpet
View Issue FREE Subscription
Next
Previous