The Webb Telescope prepares to launch. 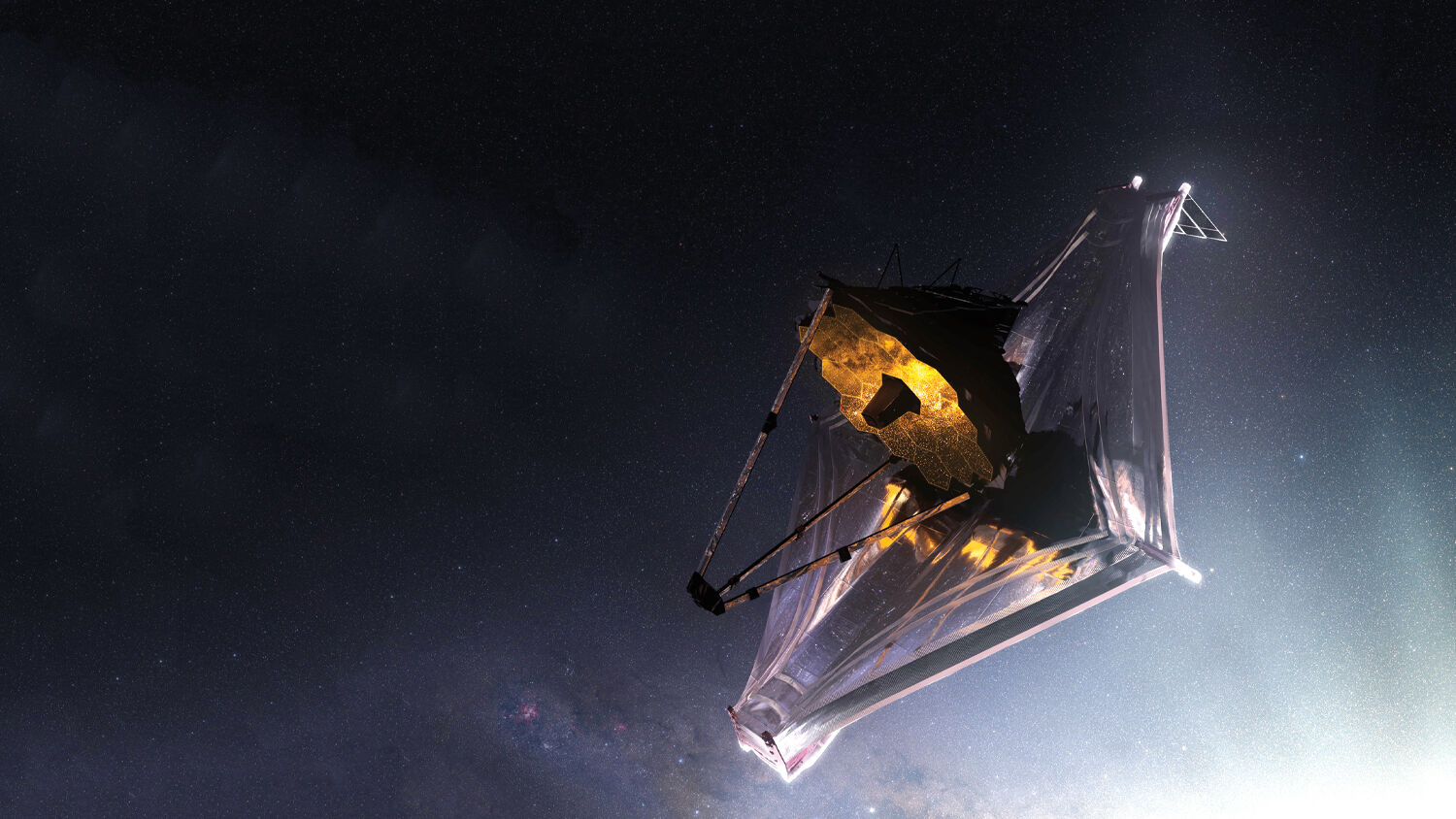 The Webb Telescope prepares to launch.

The Hubble Space Telescope has been capturing incredible images of the cosmos for years. In 1995, it concentrated its lens for a 10-day exposure on a 24-millionth section of the sky, the diameter of a tennis ball about three football fields away, a spot that appears completely empty. Yet it yielded perhaps the most influential image ever taken for space exploration: the Hubble Deep Field.

This Hubble exposure captured light from approximately 3,000 galaxies. A typical galaxy can harbor 100 million to 100 billion stars. The image set the imaginations of astronomers and ordinary people around the world on fire.

One year later, work began on a new, even more advanced telescope that would ultimately become known as the James Webb Space Telescope. Scientists—and all of us—wanted to discover more.

Hubble’s view of the universe has far transcended Earth-based telescopes. But it has its limits. Its instruments mainly detect the ultraviolet wavelengths of the electromagnetic spectrum, the same wavelengths visible to the human eye. There are many other wavelengths that Hubble can’t detect.

Add to this the fact that the universe is not static. In the 1920s, astronomer Edwin Hubble measured wavelengths of light from other galaxies and found that distant objects were drifting away from our galaxy. His work and that of other astronomers, including those using the Hubble telescope, have established the universe is expanding in all directions.

“The real excitement of the James Webb will be the things that we didn’t anticipate. Whenever you go into the unknown, you discover things you didn’t expect, and those are going to be the most interesting of all.”
Astrophysicist Matt Mountain

As the universe expands, the light traveling through it also expands. What starts out as ultraviolet light has its wavelength stretched until it becomes infrared light. (This process is sometimes referred to as “red-shift.”) Our eyes cannot see it, and neither can Hubble.

Astronomers want to see that light and learn what it teaches us. So they knew the James Webb Space Telescope would need to be a dedicated infrared instrument.

They also knew it would need to be big. The bigger a telescope is, the more light photons it can collect and the better the resolution of the images it produces. So the team building the Webb telescope gave it a primary mirror more than 21 feet wide. It will be the largest telescope ever launched into space. It is too large for the cargo bay of the rocket that will launch it. The solution to this dilemma came from origami. The telescope will launch with its 18 mirror segments configured into a folded position.

The launch itself presents many challenges of its own. It has been reported that about 300 to 400 operations must occur perfectly, without fail, the first time.

If those operations work successfully, the James Webb will fly far beyond the 340-mile orbit of the Hubble. It will outdistance the moon, which is about 240,000 miles from Earth. Its orbital resting place will be 1 million miles from Earth at what is known as the Earth-Sun Lagrange 2 (L2) point.

nasa.gov describes these points as “positions in space where objects sent there tend to stay put. At Lagrange points, the gravitational pull of two large masses precisely equals the centripetal force required for a small object to move with them.”

The L2 is not only a position where the telescope would tend to “stay put,” but also a dark, cold area optimal for infrared sensory instruments. Orbiting at L2 will also prevent the telescope from going in and out of the shadows of both the Earth and the moon.

When a problem was discovered with Hubble’s primary mirror, astronauts were able to install equipment that fixed it. But Webb will be far beyond reach. The moment it leaves the launchpad, human beings will never be able to reach it again! Everything must be perfect the first time.

“There’s nothing I can say that can come close to describing how technically difficult this telescope is,” said Tom Vice in 2017, president of Northrop Grumman at the time. “We are at the verge of impossible.”

If the hundreds and thousands of highly technical factors involved all lead to the Webb telescope reaching the L2 point, it will then be required to operate in the vacuum of space at an ambient temperature of nearly 400 degrees below zero Fahrenheit. Traveling into those cryogenic temperatures puts an even greater stress on the telescope than launch does, but it has been designed to operate in harsh cold. The greater threat is posed by the sun’s heat. To ward off that threat is a critical element: the telescope’s sunshield.

To view the infrared light stretching across the universe from faint, faraway objects, the Webb telescope must remain cold and stable. “To protect the telescope from external sources of light and heat (like the sun, Earth and moon) as well as from heat emitted by the observatory itself, Webb has a five-layer, tennis court-sized sunshield that acts like a parasol providing shade” (jwst.nasa.gov). The telescope will always be on the dark side of the Earth from the sun; and the sunshield will always stay between the Earth, sun or moon and the telescope’s iconic golden hexagonal mirrors.

What Will We See?

If all the complex calculations, manufacturing, spaceflight, deployment and operation of the James Webb Space Telescope succeed, what will it see?

It will fill a crucial void in mankind’s armory of observatories and spacecraft, viewing the universe in the near-infrared and mid-infrared with a robust set of optical and other scientific instruments.

This infrared telescope will peer through the dust of the ultraviolet images for which Hubble has become famous. It will see light from much farther away and, consequently, from further back in time. Astrophysicist Matt Mountain said: “The real excitement of the James Webb will be the things that we didn’t anticipate. Whenever you go into the unknown, you discover things you didn’t expect, and those are going to be the most interesting of all.”

The Hubble Space Telescope launched about four months after the Philadelphia Church of God, publisher of the Trumpet, began in December 1989. pcg Pastor General Gerald Flurry has repeatedly drawn attention to the images it has captured as an inspiring view into the universe and the future of mankind. He said in a 2013 Key of David program titled “Our Awesome Universe Potential,” “I strongly believe that God had a hand in the success of the Hubble Space Telescope.”

Webb is nasa’s successor to Hubble. What then are the implications for this project?

King David wrote, “The heavens declare the glory of God; and the firmament sheweth his handywork” (Psalm 19:1). Does God want us to see more of what He created? Does He want to give us an even more vivid understanding of His mind and power?

The James Webb Space Telescope has been delayed extensively and repeatedly, and it remains one tiny mishap away from complete failure. But if it succeeds, it might be an indicator that God has a hand in this mission too.

Whatever new vistas may be unveiled in space—whatever unexpected discoveries—whatever is seen in the depths of the vast unknown—it is actually linked with the destiny of the human beings who are straining so hard to peer through the heavens.

Mr. Flurry wrote in the May-June 2021 Trumpet, “Here is a most exciting truth, revealed in your Bible: The condition of these planets is closely linked with your incredible human potential!” He wrote that, as inspiring as the February landing of the Perseverance rover on Mars was, “this biblical truth makes it a million times more so.”

“In this convulsing world, we need our universe dream,” Mr. Flurry wrote. “We need to see the stupendous possibility and the eternal majesty God is offering human beings. … Nothing can stimulate our imagination like comprehending our universe potential!” (ibid).

God plainly declares to any who will believe not only that He created the universe but that He created it to be populated (Isaiah 45:18). It’s His zealous desire to plant it with life and to build His God Family forever throughout the cosmos (Isaiah 51:16). That is what we are seeing when we look at the stars.

The James Webb Space Telescope should light our imaginations on fire and motivate us to search God’s Word for the reason for the heavens! Looking into your own Bible, you can see beyond Hubble and beyond the James Webb to a vast, ever-expanding universe—a truly immense inheritance awaiting mankind.