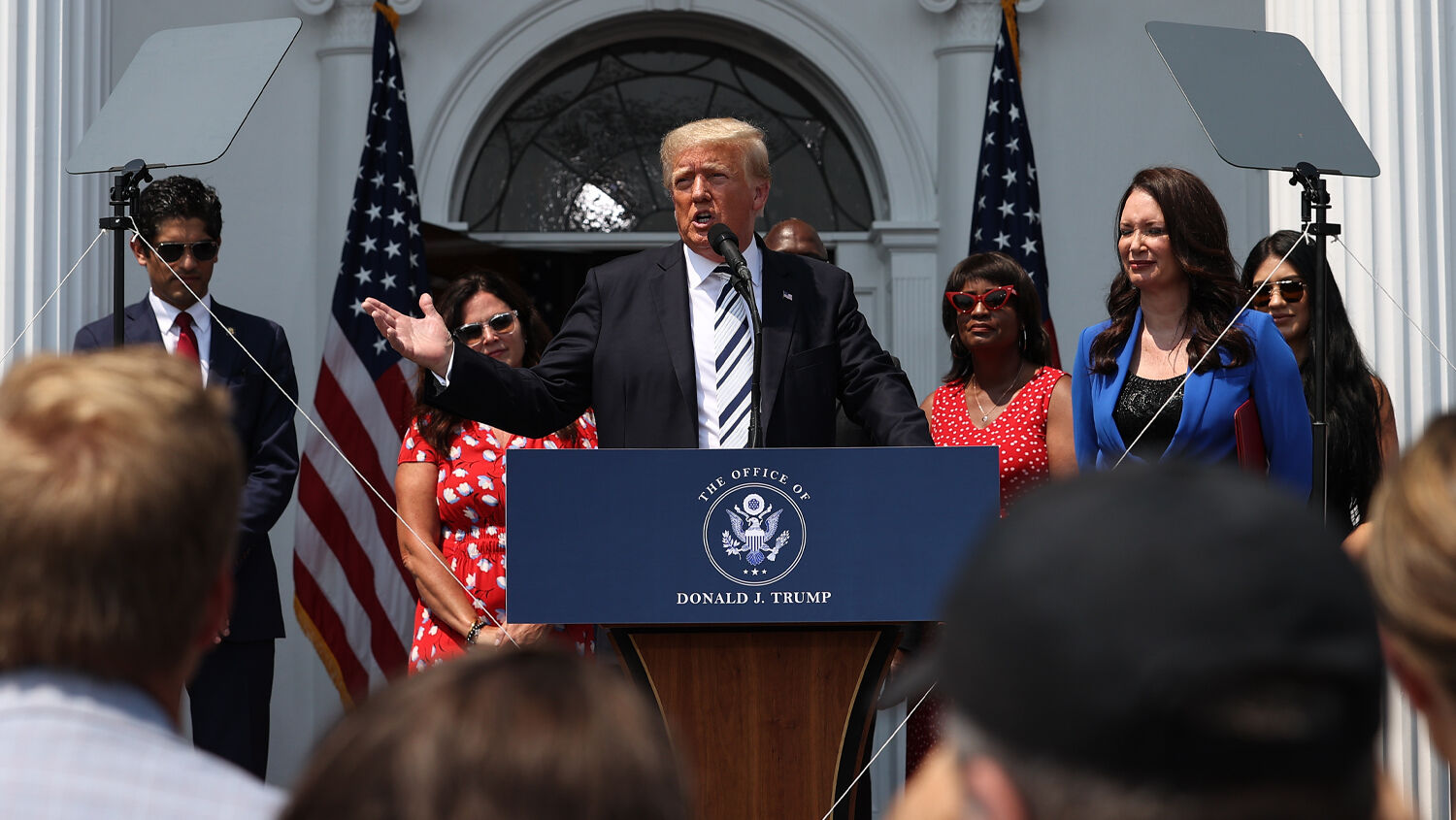 ‘There is no better evidence that Big Tech is out of control than the fact that they banned the sitting president of the United States earlier this year.’

Soon after the January 6 Capitol protests, the most influential companies in the world conspired to muzzle United States President Donald Trump. Facebook and Twitter shut down his accounts. Apple, Discord, Google, Instagram, Pinterest, Reddit, Shopify, Snapchat, Stripe, TikTok, Twitch, YouTube and other major platforms banned or restricted his messages. When Parler insisted on allowing the president to continue using its forum, Apple and Google stepped in to punish it by blocking the social networking app from their app stores. This was overt Big Tech censorship against a sitting president.

On January 7, former First Lady Michelle Obama encouraged this censorship, saying, “Now is the time for Silicon Valley companies to stop enabling this monstrous behavior—and go even further than they have already by permanently banning this man from their platforms and putting in place policies to prevent their technology from being used by the nation’s leader to fuel insurrection.”

Six months later, Donald Trump is still banned from Facebook and Twitter. But with widespread election rigging in Arizona and Georgia being exposed and Joe Biden’s border catastrophe growing worse by the day, Mr. Trump is ready to start pushing back against this egregious censorship.

On July 7, Mr. Trump announced that he was filing a class action lawsuit against Facebook, Twitter, Google and their respective ceos: Mark Zuckerberg, Jack Dorsey and Sundar Pichai. “Today, in conjunction with the America First Policy Institute,” he said. “I’m filing as the lead class representative, a major class-action lawsuit against the Big Tech giants including Facebook, Google and Twitter as well as their ceos—Mark Zuckerberg, Sundar Pichai and Jack Dorsey, three real nice guys.”

Mr. Trump said he would file his lawsuit in the Southern District of Florida. He addressed claims that Big Tech companies can censor whomever they want because they are nominally private entities. “There is no better evidence that Big Tech is out of control than the fact that they banned the sitting president of the United States earlier this year,” he said. “While the social media companies are officially private entities, in recent years, they have ceased to be private with the enactment and their historical use of Section 230, which profoundly protects them from liability. It is in effect a massive government subsidy, these companies have been co-opted, coerced and weaponized by government actors to become the enforcers of illegal, unconstitutional censorship.”

Section 230 of the Communications Decency Act of 1996 states, “No provider or user of an interactive computer service shall be treated as the publisher or speaker of any information provided by another information content provider.” In practice, this statute protects tech companies from lawsuits over content generated by users on their sites. It gives Facebook, Twitter, and Google the right to moderate content. Still, it does not provide them with the responsibility to do so. Mr. Trump claims that Section 230 makes Big Tech companies dependent on the U.S. government, and therefore more willing to engage in government-sponsored censorship that violates freedom of speech. Legal experts do not think Mr. Trump’s lawsuit has a chance in court, so it is likely that his July 7 announcement is more of a publicity stunt to relaunch his political career by focusing people’s minds on Big Tech censorship.

Whether or not these companies have a legal right to censor people, Big Tech censorship is still a danger to America. For eight years, behavioral psychologist Dr. Robert Epstein has warned that Google can easily determine the outcome of elections by adjusting its search algorithms to favor one political party over another. Research shows that Google handles over 86 percent of all search queries worldwide. And when Google’s search results come up, 95 percent of the clicks are on the very first page of search results. When Google pushes a site off the first page, very few will ever click on it.

“Google’s search algorithm can easily shift the voting preferences of undecided voters by 20 percent or more—up to 80 percent in some demographic groups—with virtually no one knowing they are being manipulated,” Epstein wrote in a 2015 editorial “How Google Could Rig the 2016 Election.”

Epstein based his calculations on experiments he conducted with Ronald Robertson and published in the Proceedings of the National Academy of Sciences of the United States of America.

Epstein told Fox News on Nov. 23, 2020, that he believed search engine manipulation shifted a “bare minimum” of 6 million votes to Joe Biden during the 2020 election. If true, Mr. Trump would have won the popular vote and the electoral vote if Google had not biased news coverage against him.

Former Google employee Zachary Vorhies went public as a whistleblower in 2019, leaking over 950 pages of internal Google documents to Project Veritas and the Justice Department. The information confirmed that Google had biased its algorithms to promote liberalism and suppress conservatism. It also revealed that Google has blacklists of search terms and a blacklist of websites.

Vorhies warned, “[T]he reason why I collected these documents was because I saw something dark and nefarious going on with the company, and I realized that they were going to not only tamper with the elections but use that tampering with the elections to essentially overthrow the United States.”

For 230 years, the U.S. has been a constitutional republic where people freely elect the representatives who govern them. Now Google’s board of directors is trying to change that—not by abolishing elections but by gradually increasing its control over what people learn and know. If it can manipulate what people think is true, it can fundamentally change America into whatever it wants!

Bible prophecy reveals how the devil uses a host of people to cast truth to the ground. “Yea, he magnified himself even to the prince of the host, and by him the daily sacrifice was taken away, and the place of his sanctuary was cast down. And an host was given him against the daily sacrifice by reason of transgression, and it cast down the truth to the ground …” (Daniel 8:11-12).

Antiochus iv Epiphanes fulfilled this prophecy when he desecrated the temple in Jerusalem with an idol of himself. But the book of Daniel was written for the end time (Daniel 12:4). This prophecy about Antiochus is also being fulfilled in God’s Church and in America in our time.

Strong’s Concordance defines “host” as “a mass of persons (or figuratively, things), especially reg. organized for war (an army) ….” Depending on the context, the expression can refer to an army of demons, angels or men. The host referred to in Daniel 8 is an army of demons and evil men who help an end-time Antiochus in God’s Church and an end-time Antiochus in the United States of America.

Trumpet editor in chief Gerald Flurry explains in America Under Attack that the spiritual Antiochus “cast down the truth to the ground” inside God’s Church, and a political Antiochus is doing the same thing in the United States. The most anti-Bible president in American history, Barack Obama, fulfills the role of the political Antiochus. He is out of office now, but he and his powerful allies have been at work in the mainstream media trying to, as Vorhies said, “essentially overthrow the United States.”

A host of bureaucrats, military leaders, intelligence agents, media moguls, tech entrepreneurs, Wall Street financiers and Chinese spies are helping this Antiochus-type cast truth to the ground. This network is the biggest threat to America today. It aims to destroy the United States, its Judeo-Christian history, its constitutional form of government, and the biblical principles this form of government is based on.

God exposes the corruption in U.S. politics so people have a chance to repent before a lawless spirit destroys America by replacing the rule of law with the horrifying rule of powerful deception and brutal force. When people do not sincerely love the truth, they come to believe lies (2 Thessalonians 2:9-12).

Like the ballot audits in Maricopa County, Arizona, and Fulton County, Georgia, Donald Trump’s class action lawsuit against Facebook, Twitter and Google is a vital part of this exposure!

For more information on the threat that Big Tech companies pose to America, please read our articles “The Obama Media Empire Strikes Back” and “The Biggest Threat to American Democracy.” And for more information about the role Donald Trump is playing in Bible prophecy, please read “What Will Happen After Trump Regains Power,” by Trumpet editor in chief Gerald Flurry.