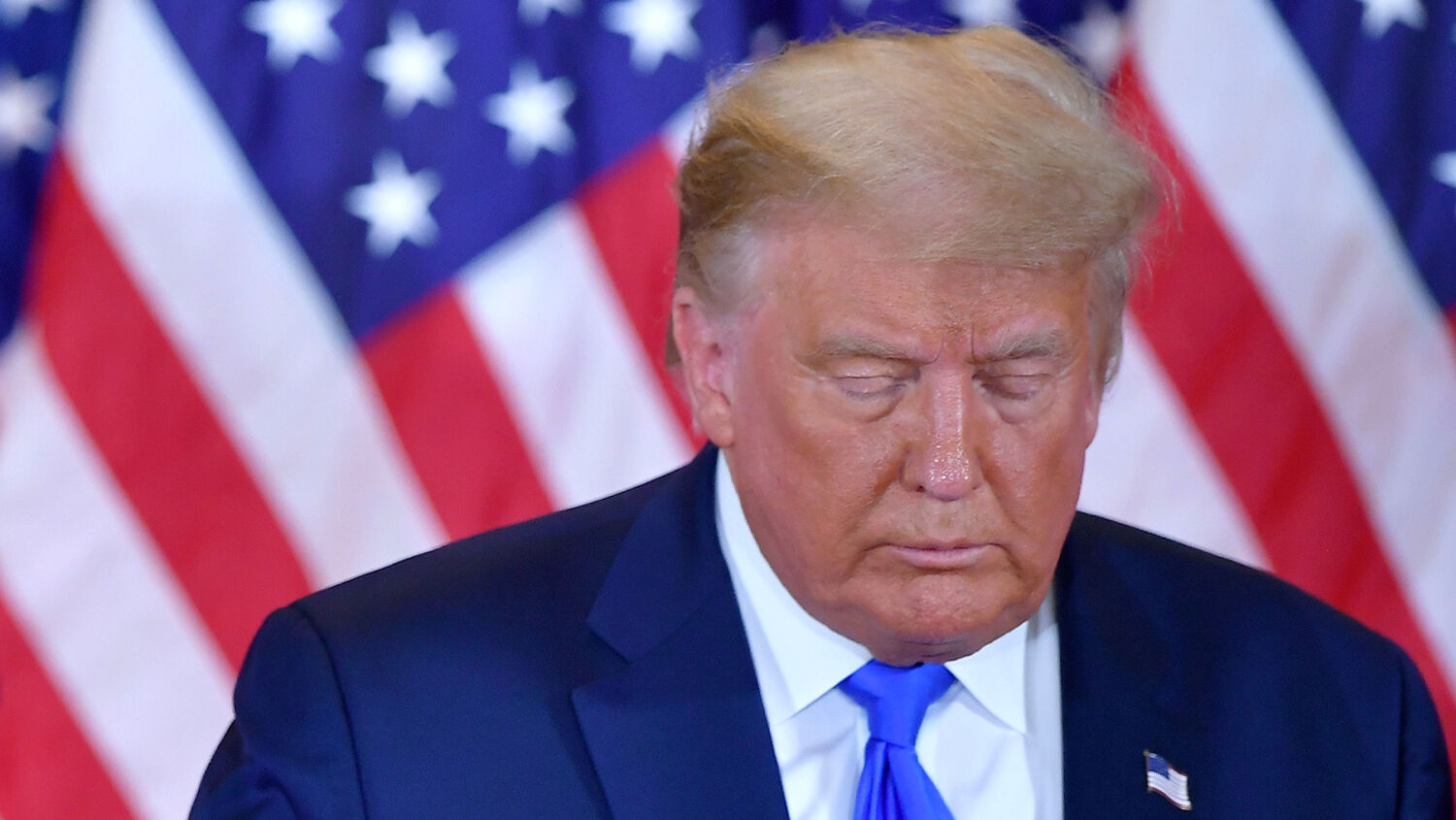 U.S. President Donald Trump looks on after speaking during election night in the East Room of the White House in Washington, DC, early on November 4, 2020.
MANDEL NGAN/AFP via Getty Images

The radical left in America is giving us all a stunning look at what authoritarianism looks like. They are silencing the most powerful man in the world. Their success shows not only that they have amassed remarkable power to silence virtually anyone, but also how eager they are to wield that power.

Starting last Friday, Big Tech and social media companies, in total lockstep with one another, muzzled President Donald Trump. His 88 million Twitter followers can no longer read his messages. Facebook shut down his account. A host of other platforms including Reddit, Twitch, Shopify, YouTube/Google, Instagram, Snapchat, TikTok, Apple, Discord, Pinterest and Stripe have all banned or restricted his messages in some form.

For Mozilla—maker of Firefox, one of the most popular Web browsers—even these stringent measures are not enough. The company’s ceo says President Trump and his movement must be monitored throughout the entire Internet. Essentially, Trump supporters need to be tracked the way Islamic State terrorists are.

As journalist Michael Tracey tweeted, “The new corporate authoritarian liberal-left monoculture is going to be absolutely ruthless—and in 12 days it is merging with the state. This only the beginning.”

This crackdown gives us a vivid picture of why God must step in to save America from the radical left. And we at the Trumpet believe that is exactly what will happen.

The left is insisting that unrestricted speech be blotted out. Even Parler—the leading alternative to Twitter—has been shut down.

Parler is what Twitter once aspired to be: a site where people can post their thoughts without being censored. Basic controls are in place to stop child pornography and other such evils, but there is no political thought police.

For Big Tech today, such open communication poses an unacceptable threat. First Google and Apple blocked Parler from their app stores. Then Amazon announced it would no longer host Parler’s servers. It gave Parler 24 hours to move their entire trove of data to a new provider. That proved impossible, so Parler is now completely offline.

How can President Trump even get a message out now? If he holds a press conference or tries to appear on tv, the major networks have already shown their willingness to turn away.

The radical left believe they can silence the most powerful man in the world and get away with it.

But it goes beyond silencing one man: They also want to punish his supporters. Across mainstream media and politics, Trump supporters are being labeled “domestic terrorists”—to be subject to the full force of America’s vast intelligence networks. Sen. Dick Durbin is introducing legislation to classify maga rallies as “domestic terrorist activity.” Former Central Intelligence Agency Director John Brennan tweeted, “Total denunciation of a despot’s legacy is necessary to eradicate any remaining malignancy.” In a now deleted tweet, abc News’s political director said authorities must begin “cleansing the movement” that President Trump commands.

This is a chilling peek at life under a Biden administration.

And a lot of it has been brought about by agents of the previous administration.

Thursday last week, former First Lady Michelle Obama wrote a letter to America’s tech companies, saying, “Now is the time for Silicon Valley companies to stop enabling this monstrous behavior—and go even further than they have already by permanently banning this man from their platforms and putting in place policies to prevent their technology from being used by the nation’s leaders to fuel insurrection.”

The next day, the bans started.

Nobody voted for Mrs. Obama. For that matter, nobody voted for the tech companies. As we’ve shown before, so many at the top of America’s Big Tech businesses and in the media are linked to the Obama administration.

It is as if Barack Obama is operating a shadow government, calling the shots within these powerful American corporations.

If these people got control, would they shut down all dissenting speech? They’ve certainly revealed their totalitarian intentions.

Host your own services and there are still ways to shut you down. Google may de-list you in its web searches. The government can pressure Internet service providers and Domain Name System servers to block your website.

In his 2018 article “Saving America From the Radical Left—Temporarily,” my father wrote, “Had Hillary Clinton been elected, the destructive trends that unfolded during the Obama presidency would have continued unchecked, and they surely would have intensified. Many people—including me—believe it would have meant an end to our constitutional republic!”

At the time that view might have seemed extreme. Sure, I don’t think President Obama was a great leader, some may have thought. But destroy our constitutional republic? Really?

Over the weekend, we got a glimpse at just how correct my father was. The radical left is on the cusp of turning this historic bastion of freedom into an altogether different nation.

Under such an administration, we at the Trumpet certainly couldn’t get our message out.

Biblical prophecy says a time is coming soon when this message will be shut down. But it also shows that this time is not yet.

This gets to the heart of the reason my father has made the daring forecast that Donald Trump will remain America’s president.

The events of the past week have not shaken our belief in those prophecies—they have only demonstrated more forcefully why it is imperative that God fulfill them!

To understand these historic events in America, we must see the spiritual dimension to them.

There is a very real spirit world. The Bible makes clear that, though modern religion avoids talking about him, there is a devil. He hates God and anything to do with God. He hates Britain and America, nations that—as we show in our free book The United States and Britain in Prophecy—have a history with God. But most of all, he hates God’s Church and God’s message.

2 Kings 14:26-27 describe a crucial moment in Israel’s ancient history that is actually a forerunner and a prophecy for modern Israel (for proof of this, read my father’s article “Why Donald Trump Will Remain America’s President”). It reads, “For the Lord saw the affliction of Israel, that it was very bitter: for there was not any shut up, nor any left, nor any helper for Israel. And the Lord said not that he would blot out the name of Israel from under heaven: but he saved them by the hand of Jeroboam the son of Joash.”

America today is suffering grievous affliction. It is on the brink of being destroyed as a constitutional republic! This prophecy says God would use a modern-day type of Jeroboam to save it. Why?

This past October, my father wrote,

Barack Obama’s deep state would have blotted out America’s constitutional republic and replaced it with a violent dictatorship if he had not been stopped by an end-time King Jeroboam ii. The Trumpet could not deliver God’s warning message in a cia surveillance state, so God had to raise up President Trump to temporarily halt what the devil was doing through the Obama administration.

President Trump is a very flawed human leader who is not particularly religious. Yet God is using him like an end-time version of King Jeroboam ii. As long as God keeps empowering President Trump to resist the satanic forces attacking America, we can continue delivering His warning message. But once God stops empowering Mr. Trump, the writing is on the wall.

Satan hates the message that is exposing his evil. He abhors God’s truth, and he despises the message coming out of the Trumpet. That is at the heart of the attack this weekend. Take out President Trump, and he can take down this message.

Someday the devil will succeed in stopping it. Amos 8:11 forecasts a “famine … of hearing the words of the Lord.” But before then, the message goes out with real power. It reaches the point that the “land is not able to bear all his words” (Amos 7:10). There will come a time when even President Trump becomes aware of the message and rejects it.

We have not yet reached that point. This message must go out. God will not allow the radical left to shut down free speech yet. And so He will ensure Donald Trump remains America’s president.

Watch—because the coming days are certain to prove to be some of the wildest in world history.