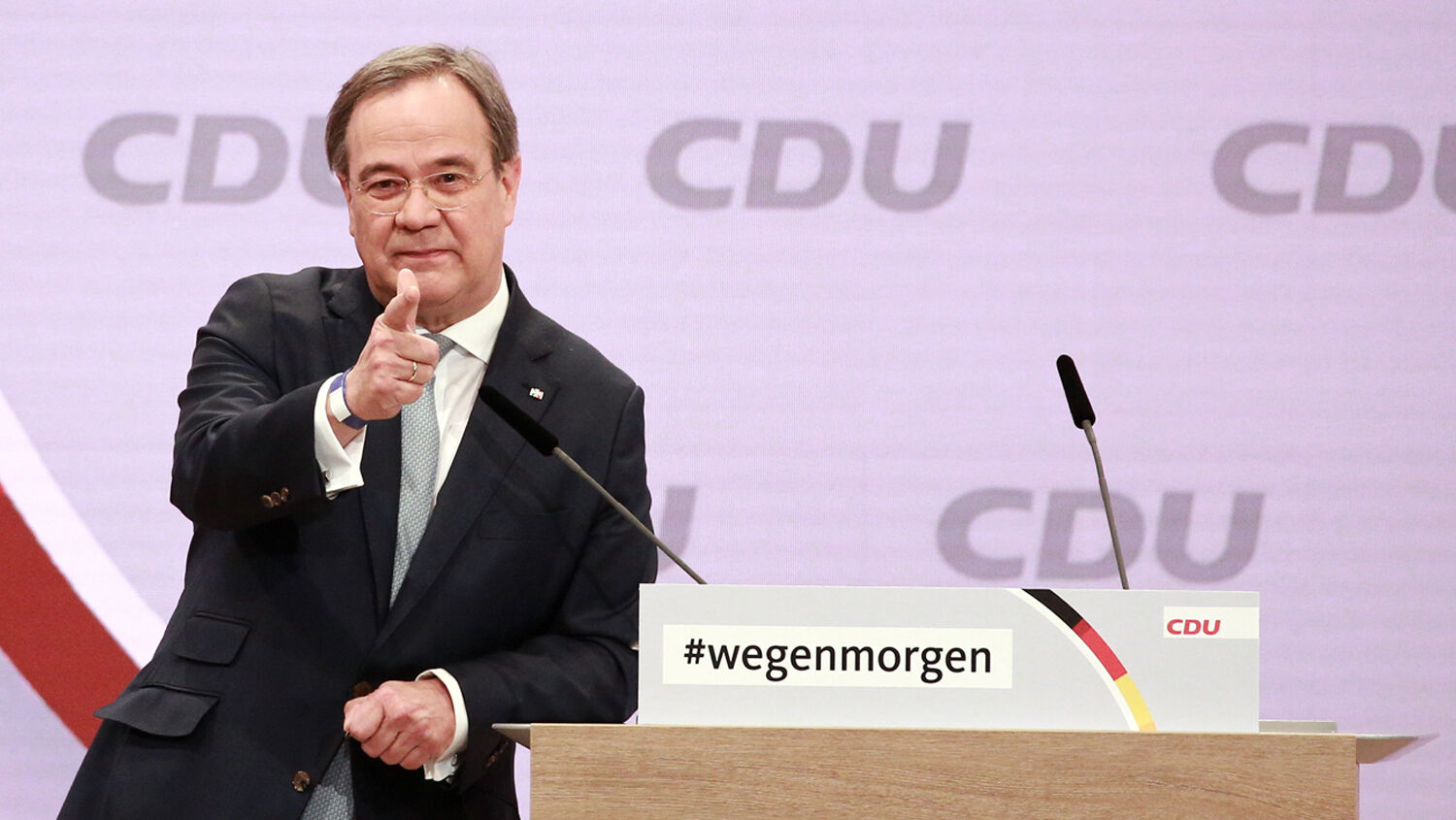 The Catholic spirit that ruled Europe for centuries is being revived.

Germany’s next chancellor will probably be a devout Catholic—and that is causing a lot of discussion in Germany. The front-runner “professes his religion like no top politician has done for a long time,” Der Spiegel noted on June 20 (Trumpet translation throughout).

Armin Laschet, leader of the Christian Democratic Union, takes religion seriously and lets it guide his politics. Are we seeing a return to Germany’s past when religion and politics went hand in glove?

Much has been written about Laschet’s faith and the viewpoint of his predominant Catholic advisers. Even in his campaign, he has surrounded himself with Catholic politicians, such as Jens Spahn and Friedrich Merz. He openly talks about his faith, attends various church events, and venerates Charlemagne who made Catholicism popular in Europe.

“Not since the Protestant Katrin Göring-Eckardt of the Greens and the Catholic Social Democrat Andrea Nahles has a top German politician been so outspoken about his faith and declared religion to be the basis of his life and actions,” Spiegel wrote. “The Union’s candidate for chancellor is not merely a member of the Catholic Church. He is deeply rooted in it.”

While many politicians belong to a church, Laschet claims to be a practicing Catholic who, in his youth, considered becoming a priest. While he never pursued the priesthood, a religious mindset has shaped him ever since.

His longtime home pastor Monsignore Heribert August has accompanied Laschet’s family for years, even serving as an adviser of sorts during Laschet’s political career. The two are in regular contact and also talk about politics. Spiegel noted: “Laschet seeks the priest’s advice before making important decisions: What do you think? Would you do it differently? The church is always involved in some way when Laschet makes policy.” That is quite a statement

Spiegel explained what differentiates him from Bavarian State Premier Markus Söder: “Söder, a Protestant, also describes himself as a believer, but faith appears in his politics only when it suits him. With Laschet, it comes up all the time. Even when it doesn’t fit.”

Catholicism has been a constant presence in Laschet’s life and career. He was born and raised in Aachen, seat of Charlemagne, the first Holy Roman emperor. Laschet attended a local Catholic school and was deeply embedded in his parish: as a Mass server, in the choir and in the local Catholic youth club.

Laschet considered becoming a priest but instead studied law before working as editor of a church newspaper and, later, head of a Catholic publishing house. His faith has popped up regularly throughout his 25-year political career: in the Berlin Bundestag, the European Parliament and back as minister president of North Rhine-Westphalia, Germany’s most populous state.

Before his election victory there in 2017, he invited Chancellor Angela Merkel on a tour of his beloved Aachen, accompanied by his close friend and adviser Msgr. Heribert August.

Laschet is eager to keep the history of the Holy Roman Empire alive—in his life, in Aachen and in the whole of Europe.

In 2018, the Aachen Cathedral held a weeklong festival celebrating its 40th anniversary as a United Nations Educational, Scientific and Cultural Organization (unesco) World Heritage Site. The event was attended by 73,000 visitors and heavily featured the cathedral’s founder—Charlemagne. Laschet was a keynote speaker at the event. He also keeps a bust of the late emperor in his office.

If he becomes chancellor, Laschet says he would not move to Berlin but remain primarily in Aachen, from where Charlemagne reigned.

Under Laschet’s leadership, the German state of North Rhine-Westphalia signed an agreement with the Vatican on Oct. 9, 2020, to avert the secularization of one of its leading universities. Laschet saved the religious program by providing needed financial support. The agreement was signed the same day Charlemagne was crowned king of the Franks centuries prior. This is likely not a coincidence as the tradition of politicians supporting the education of priests in Germany began with Charlemagne.

Since January 2019, Laschet has served as the German-French Cultural Representative. While the form of culture that he promotes is nothing new, it hasn’t been at the forefront of European politics for centuries. In response to his appointment as culture representative, Laschet said: “In the next few years—as Europe is reorganizing itself—science, culture and education will become more important.”

For his stance in the refugee crisis, Laschet received a medal from the Catholic Order of Malta, saying that his “political actions” were “always based on Christian values” in that period.

The Irish Times also drew attention to one more interesting detail: “Decades of Catholic cdu leaders was shaken in 2000 with the election of Merkel—a Protestant pastor’s daughter.” Are we now seeing the cdu return to its predominantly Catholic roots?

Nathanael Liminski has advised Laschet for years and is said to be the driving force behind many of his political decisions. The 35-year-old grew up in a religious home, where both parents were members of the ultra-conservative Catholic organization Opus Dei. Opus Dei means “work of God,” and has about 93,000 members worldwide and 600 in Germany. The organization of Catholic laymen and priests is “surrounded by the myth of a secret society,” Spiegel Online explained. The organization was founded in Spain by Josemaría Escrivá, a friend of Francisco Franco, the Spanish dictator who ruled from 1939 to 1975. “Opus members see themselves as part of a God-centered movement to save the church,” Spiegel Online noted.

Liminski has largely refrained from speaking his opinions publicly in recent years. But one interesting detail about him is worth noting. In January 2011, he moved to the German Ministry of Defense, where he worked as a speechwriter for then-Defense Minister Karl-Theodor zu Guttenberg. Soon afterward, Guttenberg resigned from all offices, but Liminski’s career had just begun. He continued working in the Defense Ministry and later in the Interior Ministry.

The Trumpet has drawn particular attention to Guttenberg as the most likely man to rule the prophesied resurrection of the Holy Roman Empire. Guttenberg and Laschet have previously campaigned together and are not afraid to uphold connections with controversial figures, such as Liminski. A Catholic spirit unites these two politicians.

With Laschet, Catholicism may reenter German politics. According to the Irish Times, Laschet said in a Brussels panel discussion: “Catholics have a drive to shape things on a global level; embedded in the papacy, we are rarely nationalists.”

To the world, this empire seems dead and buried. Yet it is prophesied to revive once more. Revelation 17:8 records: “The beast that thou sawest was, and is not; and shall ascend out of the bottomless pit, and go into perdition: and they that dwell on the earth shall wonder, whose names were not written in the book of life from the foundation of the world, when they behold the beast that was, and is not, and yet is.”

The Bible is also very specific on who will be ruling this empire: “And the ten horns which thou sawest are ten kings, which have received no kingdom as yet; but receive power as kings one hour with the beast” (verse 12).

In a Plain Truth personal, late educator Herbert W. Armstrong wrote: “It will be a political-military union of 10 nations. Possibly this union will restore the monarchy system to power. It may put kings presently without thrones back in power—or make kings of princes who have not succeeded to thrones. Or it may set on thrones as kings men who are not of royal birth. There will be 10, ruling 10 nations or groups of nations in the area of the once-great Holy Roman Empire. But there will be one super-king over the 10.”

Ten kings will form in Europe who will be of one mind—the mind of the Holy Roman Empire. While it is yet unsure who these 10 kings will be and who will be ruling over them, we clearly see that the mind of the Holy Roman Empire is being revived. It is interesting to note that Laschet’s family claims to be descendants of the late Charlemagne, giving them a royal lineage.

In “The Spirit of Charlemagne Is Alive in Europe,” Trumpet editor in chief Gerald Flurry wrote in 2016: “The Bible foretells that one more resurrection of this empire is ahead of us. And events in Europe are dovetailing with that prophecy very closely! Western Europe, a supposed modern bastion of democracy and secularism, is about to once again become a unified empire led by a strongman and influenced by the Catholic Church!”

The cooperation between European leaders and the Catholic Church is at the essence of this prophesied empire. The very fact that major newspapers are noticing a sort of religious revival in politics should cause everyone to heed these prophecies. To learn more about them, request a free copy of Germany and the Holy Roman Empire. Also read “Is Germany’s Next Leader a Fan of a Medieval Mass Murderer?”