Inside European cathedrals is the glorification of a heritage that should trigger nightmares. 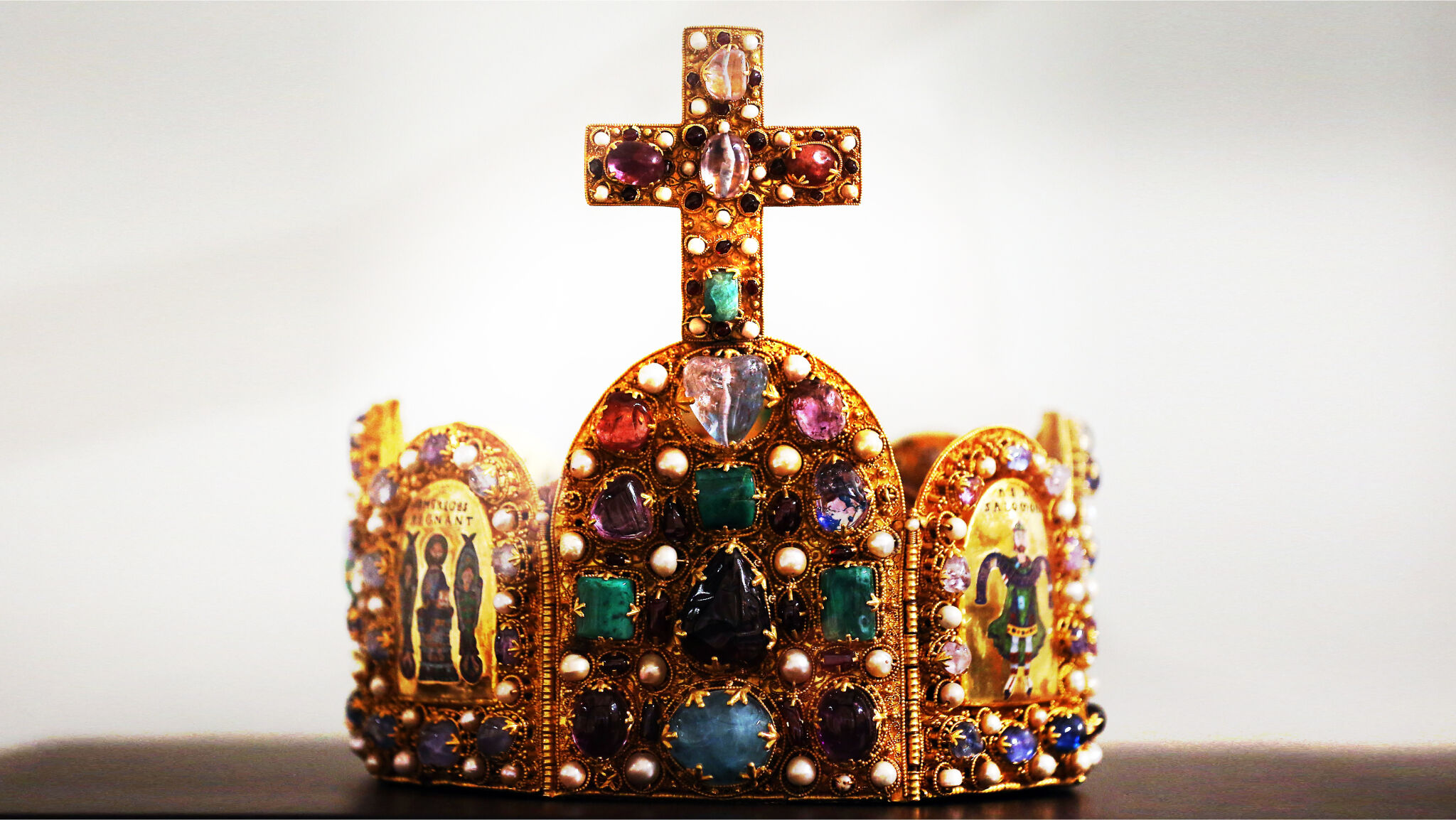 Inside European cathedrals is the glorification of a heritage that should trigger nightmares.

Charlemagne. The king. “The Great.” The eighth-century ruler who united much of Western Europe under a theocracy known as the Holy Roman Empire. Today he’s celebrated as a model for Europe to follow. But is Charlemagne’s heritage something to celebrate?

Germans thronged the streets to participate in the biggest celebration in the cathedral’s recent history. But what were they really celebrating?

“Aachen is special,” Steinmeier said. “If a federal president comes to a place twice in half a year, there must be something special” (Trumpet translation throughout). During Steinmeier’s previous visit, he went on an in-depth tour of the cathedral, which houses Charlemagne’s throne. Although Charlemagne was a political emperor, he set his throne in the middle of this Catholic cathedral.

The cathedral was initially built as Charlemagne’s palace chapel from a.d. 793 to 813; it later extended to the cathedral that stands today. “The contemporaries declared the Palatine Chapel a miracle of architecture–half divine, half human in origin,” the German Commission for unesco stated.

While the cathedral was under construction, Charlemagne was on a military campaign slaughtering, subjecting and converting the people of Saxony. While extending his realm, Charlemagne commissioned Aachen to build the cathedral that was later dedicated to “Mother Mary.”

But the citizens of the city soon found themselves lacking the funds to finish the work. According to myth, the desperate citizens of Aachen entered a pact with the devil: He promised to provide the funds, and the Aacheners promised him the first “soul” that would enter the cathedral—Pope Leo iii. In the end, the legend recounts, the devil was fooled and Charlemagne’s cathedral was built.

This legend served as the introduction of the weeklong Aachen celebration. On the eve of September 23 and every evening that followed, the story of the cathedral, beginning with the legendary pact, was recounted in a spectacular light show. A 15-minute 3D presentation was projected onto the cathedral, recounting this story and the cathedral’s particular connection to the people of Aachen.

Viewers watched how the building transformed over the centuries and how various kings and emperors were crowned therein. Many who viewed it said they were particularly moved when they saw this most venerated cathedral under attack as Allied forces bombed the city at the end of World War ii.

Besides concerts, shows and entertainment, the celebration also portrayed a powerful message for Germany today.

Charlemagne and the Reemergence of the Roman Empire

The German unesco commission described Aachen Cathedral as “an artistic and architectural masterpiece. It is seen as a symbol of the unification and the reemergence of Western Europe after the end of the Roman Empire.” In his speech, Steinmeier said:

For it was above all here that Charlemagne formulated his claim to take on the legacy of the Roman Empire. [Later cathedrals] are all stone testimonies of the same claim. They in essence say: We here, we are the real and legitimate heirs of Rome, the Roman Empire. Understandably the empire has become Christian with Constantine being the first Christian emperor.

Charlemagne saw himself as heir of the fallen Roman Empire and worked vigorously to revive it. In the Middle Ages, it was commonly believed that Germany had inherited the task of reviving the Roman Empire. Out of the ashes of the Roman Empire rose the “Holy” Roman Empire of the German nation. “Holy” due to the empire’s alliance with the Roman Catholic Church.

In his book The Rotten Heart of Europe, Bernard Connolly writes that most European Union leaders are again working to “re-create the empire of Charlemagne.” Indeed, several European leaders have openly embraced Charlemagne as a model for Europe’s future. Yet as Trumpet editor in chief Gerald Flurry writes in his booklet Germany and the Holy Roman Empire, this should be worrying. In a recent article, he stated:

Each year since 1950, the German city of Aachen, where Charlemagne lived and is buried, awards the Charlemagne Prize to an individual who has served the cause of European unification. I attended the award ceremony in 1997, when former German President Roman Herzog received it. In his acceptance speech, Dr. Herzog said, “Charlemagne, after whom our prize is named, made his own particular choice: the first unification of Europe. At such an hour the truth must be told: Only by wading through a sea of blood, sweat and tears did he reach his goal.”

European leaders justify the bloodshed caused by Charlemagne—saying the overarching purpose was worth it. That should be alarming. Adolf Hitler once claimed to follow Charlemagne, and he reasoned the same way.

In 1935, Hitler asserted that Charlemagne’s bloodshed was necessary to unite Germany. When Hitler made this statement, people still believed that he was a man of peace and paid little attention to such atrocious statements. But as professor and renowned German medieval researcher Johannes Fried pointed out in an interview with the German popular newspaper Die Welt, Hitler’s statements were “preparing for his own acts of violence, to praise Charles was a strategy of legitimacy.”

Hitler praised Charlemagne to prepare for the greatest bloodshed mankind has ever seen. He moved Charlemagne’s crown back to Germany in 1938. Europe today is again praising Charlemagne. (Read “Why Is Austria Promoting the Crown of Charlemagne?” for more information.) This revival should concern everyone.

A Christian Claim to a Political Throne

Charlemagne is venerated not only by politicians but also by Catholics. The archdiocese of Cologne’s Domradio.de explained the paradox in light of the recent celebration:

Although Charlemagne is not considered a saint in the whole church, he may be revered as such in Aachen—despite his crusades and women stories. Von Holtum [dean of the Aachen Cathedral] recalls that Charles spent the last eight years of his life in Aachen from Christmas to Easter, and from Hochmünster [part of the Cathedral] he took part in the choral prayer … in the morning, noon and evening . [Charlemagne] hence was also “a deeply devout man.”

He was very much interested in the origins of Christianity. …

[Charlemagne’s] throne could be connected with the beginnings of Christianity, whose marble slabs probably come from the Holy Sepulchre, according to the dean of the cathedral.

In other words, Charlemagne’s throne is meant to connect his reign all the way back to Jesus Christ. This throne is a symbol of the Catholic Church’s claim that Christ is already ruling on Earth through His representatives. This throne stands as a symbol of the authority under which the Holy Roman Empire tried to subjugate the whole world. Emphasizing the “Christian” component of this empire helped legitimize its quest for world dominance.

Those who are awarded with the annual Charlemagne Prize receive a tour of Aachen Cathedral, including Charlemagne’s throne. During the Aachen Cathedral festival week, this throne was on special display and open to public viewing.

Belief that religion should have a bigger role in politics is growing in Europe. Editor in chief Gerald Flurry wrote in the October Trumpet’s cover article:

A strong example of this trend is Austria’s new chancellor, Sebastian Kurz. He is a staunch Catholic, and outspoken about the fact that his religion guides his politics.

Herbert W. Armstrong forecast this religious revival decades ago. In August 1978, he wrote in the Good News, “Europeans want their own united military power! … They have made a real effort toward union in the Common Market. … But they well know there is but one possibility of union in Europe—and that is through the Vatican.”

“In only one way can this resurrected Holy Roman Empire be brought to fruition—by the ‘good offices’ of the Vatican, uniting church and state once again, with the Vatican astride and ruling” (Plain Truth, January 1979).

We have been watching for this revival for decades, and now it is emerging.

Mr. Armstrong made his forecasts based on Bible prophecies. The Bible describes a religious empire that rises repeatedly in Europe, seen throughout history. Men like Charlemagne, Otto the Great and the Habsburg dynasty have forged revivals of this empire in Europe with the support and blessing of the Catholic Church.

The Bible tells us there is one more revival of this empire.

“And there are seven kings: five are fallen, and one is, and the other is not yet come; and when he cometh, he must continue a short space” [Revelation 17:10]. This verse is key to understanding the timing of the next resurrection of the Holy Roman Empire. God says that after five are fallen, He would send someone to explain this prophecy. This was Herbert W. Armstrong. Mr. Armstrong came on the scene as Adolf Hitler was leading the sixth resurrection of the Holy Roman Empire, which is the “one is” in verse 10. When the meaning of Revelation 17 was revealed, during the time of the sixth resurrection, the seventh resurrection had “not yet come.”

Today, however, the revival of that empire is happening!

And remarkably, as they are reviving it, Europeans are doing something they have never done since the vile and murderous sixth head: They are publicizing the Holy Roman Empire! They don’t publicize what Adolf Hitler did; too many people remember that bloody history. Instead they cloak it in the tradition of Charlemagne. And yet it is the same story! Not as many people died in the First Reich because they didn’t have the same military technology then. But it is the same ambition!

The Bible tells us that this revived Holy Roman Empire is more dangerous than ever. But it will be the last. With today’s modern weapons of war, it will bring the whole world to the brink of annihilation. But the same scriptures tell us it will be destroyed by Jesus Christ.

The beginnings of this prophecy are being fulfilled before your eyes. Europe’s political and religious landscape is about to experience a drastic change. European leaders have already taken action to resurrect this empire. These leaders follow in the footsteps of Charlemagne and Hitler, but the destruction that they will wreak will be unprecedented. These moves should shock the whole world, instead mankind barely notices until it is too late. If you understand Bible prophecy, you will not only be greatly alarmed by these events, you will also take great hope. In the midst of this most horrifying news, God has given a spectacular sign of hope.

To learn more about how this evil empire is rising again and where to find hope in the midst of it, read Mr. Flurry’s article “The Holy Roman Empire Goes Public—Big Time!”