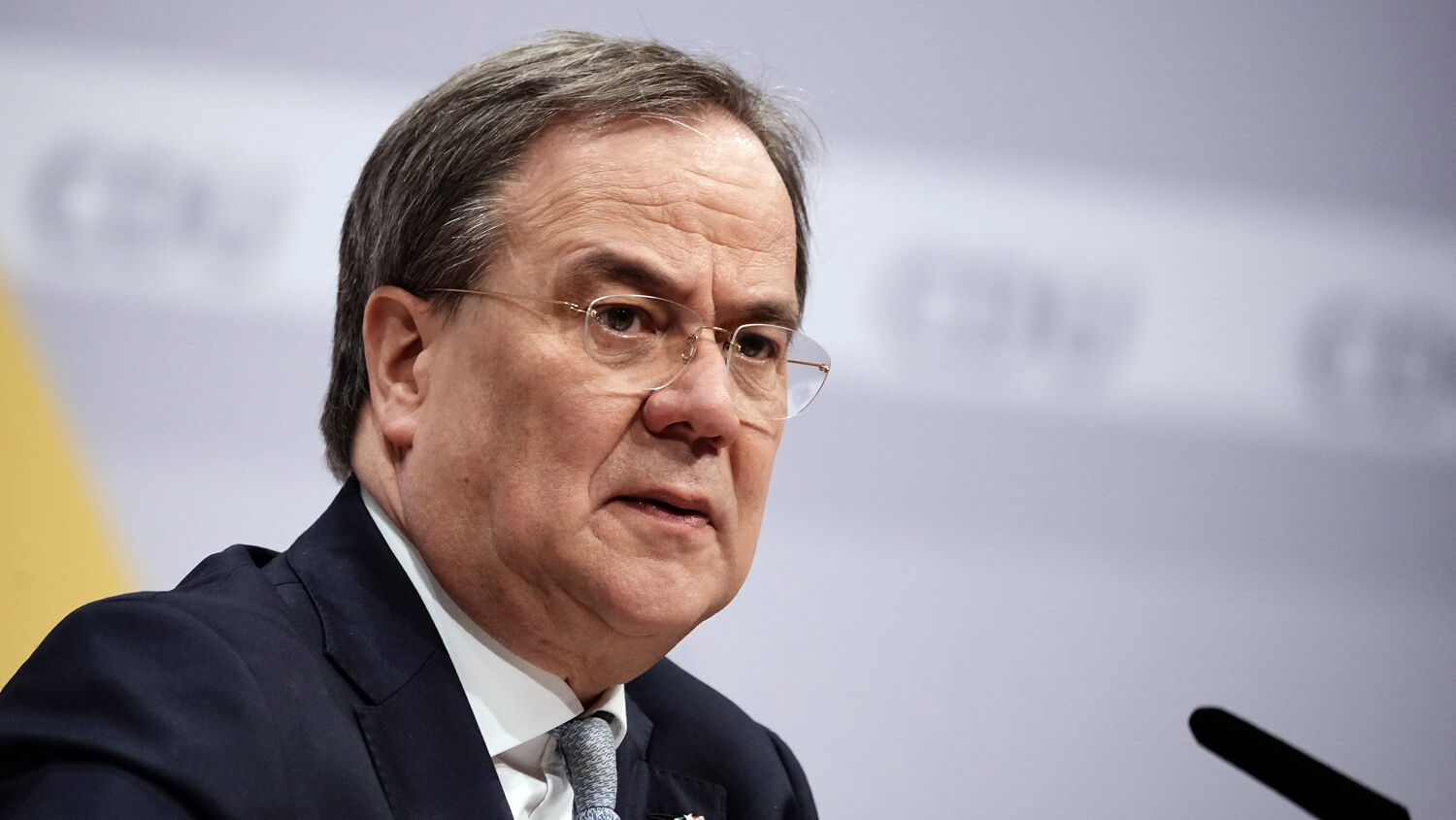 The new party leader Armin Laschet sits on the podium at the digital federal party conference of the CDU.
Michael Kappeler/picture alliance via Getty Images

Armin Laschet is a fan of Charlemagne. And, unlike me, he’s quite important. On January 16, he was voted in as leader of Germany’s Christian Democratic Union (cdu), which means he’s in pole position to succeed Chancellor Angela Merkel after German elections in September.

Laschet’s love of Charlemagne is so great that journalists have taken note. In a short piece introducing Ms. Merkel’s heir-apparent, the Local wrote:

He is a great fan of Charlemagne, the king of the Franks credited with uniting Europe whose empire was based in Aachen. His family has even claimed they are direct descendants.

To us at the Trumpet, Charlemagne is significant. But the Local has no such bias. Apparently, Laschet’s love of Charlemagne is so great, it’s one of the top facts they had to include in their article.

This love should make people around the world sit up and pay attention. Unfortunately, to many, Charlemagne is an unfamiliar figure. Yet we should be asking: Why is this top leader such a fan of a bloody mass murderer?

Charlemagne ruled over the Franks from a.d. 748 to 814, from his capital in Aachen. Laschet was born in Aachen and has done much to promote Charlemagne’s legacy. He hosts a golden bust of the medieval ruler in his office in the State Chancellery.

When Aachen Cathedral held a week-long festival celebrating his infamous ancestor, Laschet was the keynote speaker.

His love of Charlemagne plays an active role in his political life. Charlemagne revived the Roman Empire to create a European Empire that stretched beyond national borders. Laschet sees the European Union as a revival of Charlemagne’s efforts.

“Charlemagne never thought nationalistically about one country; always about Europe as a whole,” he said. “Maybe ‘transnational’ would be a better word. He sought the union of the various peoples of his empire and found this cohesiveness in Christianity.”

That Christianity is a second key way Charlemagne continues to influence Laschet. Ms. Merkel is a Protestant and kept religion largely out of politics. Laschet is a strong Catholic; he once had a job editing a Catholic newspaper.

“For me,” Laschet once told Die Welt, “historically there are two main pillars that shape our society to this day: Christianity and education.” Both pillars, he said, were founded by Charlemagne. When one of his state’s leading universities was about to be secularized, he stepped in to save its Catholic links. In fact, Catholic education is so important to him that he’s travelled to the Vatican to discuss the problem of secularizing Europe’s universities. In 2018, on the 1,250th anniversary of the crowning of Charlemagne, he signed an agreement with the Vatican on behalf of his state, North Rhine-Westphalia, to promote Catholic education in its top university.

But what’s wrong with all this? Why is idolizing Charlemagne a problem? Weren’t all leaders from this time period a bit violent?

Charlemagne spent most of his life fighting, and his violence was on another level compared to his contemporaries. His longest war was against the Saxons. His own biographer and loyal servant, Einhard, wrote, “Never was there a war more prolonged or crueler than this, nor one that required greater efforts on the part of the Frankish peoples.”

In his book Millennium, historian Tom Holland describes the general pattern of destruction: “Warfare had long been the activity of choice among the Franks. … Leaders who failed to provide their followers with the spoils of pillage rarely endured for long. No sooner had winter thawed into spring than the Frankish people, dusting down their spears, would prepare to follow their king out on campaign. Charlemagne, whose hunger for booty was insatiable, had inherited to the full the appetites of a primordial line of warrior-chiefs.”

Holland discusses Charlemagne’s view of himself as a new King David, the head of a new chosen people with the sanction of God: “It was in the perfect consciousness of this that Charlemagne made the wastes of Saxony to flow with pagan blood; that he spread even among the barbarous Slavs who swarmed on the outer reaches of the world awful rumors of the wrath and terror of his name; that he returned every autumn from his campaigns with lumbering wagon trains of booty, spoils with which to strengthen the Christian order throughout his vast domains.”

The blood that flowed was not only spilled in battle. After one rebellion, Charlemagne executed thousands of prisoners. Entire tribes were forcibly relocated. Even some of Charlemagne’s advisers questioned the degree of bloodshed he inflicted.

He imposed Catholicism on all he could reach. Refusal to be baptized meant death. So did following the old pagan religions, holding unauthorized religious meetings and eating meat during Lent.

“Not since the age of the Caesars had atrocities been committed on quite so imperious a scale—and never before with the goal of imposing the love of Christ” (ibid).

I can’t think of a leader with this level of bloodshed who is so adored. From the broadly similar time frame in the United Kingdom reigned Alfred the Great. I’m sure he did some things that would offend Western sensibilities—but no rivers of blood. This is something far worse than the distant relatives involved in the slave trade or any one of the many sins that get historical figures “cancelled.”

It should be disturbing that Germany’s possible next leader exalts this person—and even sees modern Europe as the successor to his bloodthirsty ancestor. No English-speaking politician could get away with promoting anyone like him.

The fact that Germany’s next leader is looking back to Charlemagne to chart his future course is exactly what we’ve been forecasting for decades.

Bible prophecy tells us that there is a deep connection between the European Union and the tradition of Charlemagne. Revelation 17 describes seven successive resurrections of the Holy Roman Empire. Each of the seven resurrections follows in the footsteps of the last.

Throughout history, various rulers have repeatedly worked with the Catholic Church to revive the Roman Empire. Charlemagne was one of these.

We’ve seen six resurrections of this empire. The Bible tells us to expect one more.

Revelation 17:10 reads, “And there are seven kings: five are fallen, and one is, and the other is not yet come ….” During the sixth king, God would send someone who would explain this prophecy. Adolf Hitler was that sixth king. And while he was taking over Europe, Herbert W. Armstrong was teaching the truth about this prophecy.

Your Bible says this Holy Roman Empire will rise one more time—the spirit of Charlemagne will be back. Now, Germany seems poised to be led by a leader who reveres Charlemagne.

Laschet won’t necessarily be Germany’s next leader. He’d still have to win an election in September. And before that he’d have to stand as his party’s candidate for German chancellor. The cdu usually fights elections with the help of its sister party the Christian Social Union (csu). These two parties typically unite behind a common candidate—most often the cdu leader. But this year, the csu leader, Marcus Söder, is leading in the polls.

But even if Laschet doesn’t get the ticket, look what his success says about the stature of Charlemagne in modern Germany. Wanting to resurrect his legacy can get you all the way to top of Germany’s most popular party.

It’s a legacy you must understand. A great place to start is Trumpet editor in chief Gerald Flurry’s article “The Holy Roman Empire Goes Public—Big Time!” And if you’d like to go into even more depth, our free book The Holy Roman Empire in Prophecy will give you more of this crucial history and explain why this is such an important prophecy to watch.