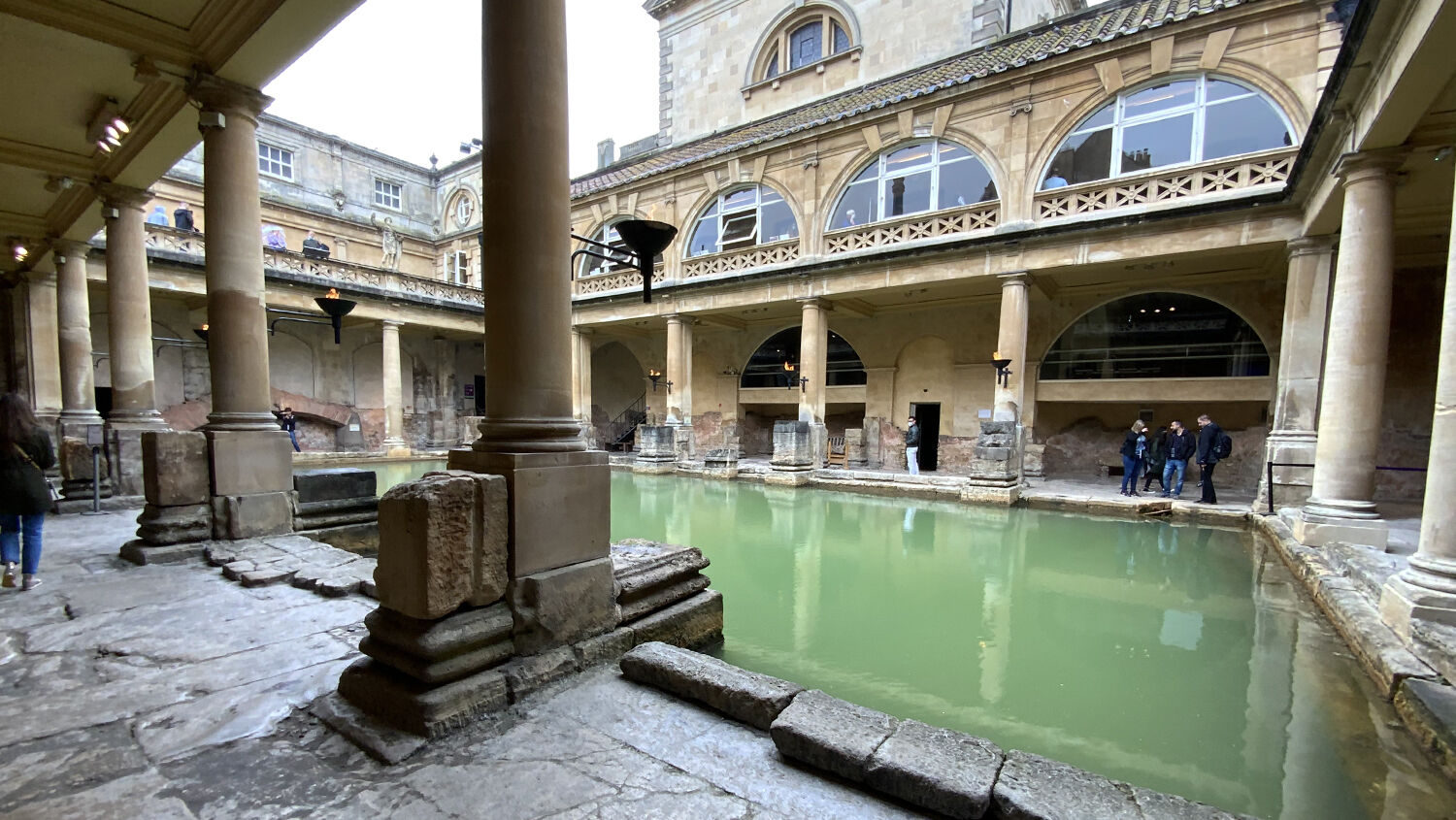 Rome and Britain have both ruled the world. Rome fell centuries ago. When will Britain’s time come?

The Roman Empire was the mightiest empire of the ancient world. Stretching from southern Scotland to the Caspian Sea, the legacy of Rome’s influence is everywhere. One country where that is apparent is Great Britain. In the case of cities like Bath, in southwestern England, this is really apparent. Bath is built on the remains of an ancient Roman bath-temple complex. The ruins are now a tourist attraction and archaeological site.

I was privileged to visit the Roman baths recently. The remains, even in their ruined state, are impressive. The Romans tapped into a hot spring believed by the Celts to be sacred and created an engineering marvel. An elaborate system of conduits transported hot water from its source to various public baths. The Roman baths had everything from a “hot tub” to a “cold plunge” to a sauna. An overflow system piped excess water into the Avon River. Remains from the adjacent temple to the goddess Minerva, including the bronze head of Minerva’s idol, showcase mastery in artistic craftsmanship. The site does a good job in showing how advanced Roman civilization became.

Little is left of the original structure. The ruins are now integrated into Bath. But much of the city’s architectural heritage imitates Greco-Roman architecture. Built up in the 18th century, Bath’s buildings gleam with white sandstone and Corinthian columns. Memorials to British monarchs share the stage with statues of Roman emperors. You could call Bath a giant exclamation that Britain had replaced Rome as the world’s superpower. Many at the time saw Britain as the “new Rome,” even as the rubble of old Rome lay under British cities.

Will Britain share Rome’s fate? Could the same forces that caused Rome to fall cause Britain to fall?

“Why do great nations or empires fall,” Trumpet editor in chief Gerald Flurry asked in his 2009 article “The Modern Romans.” “Why do superpowers fall? It is a fact of history that all world-ruling empires have collapsed. But why?”

There were a variety of reasons for the fall of the Roman Empire. History in general isn’t kind to sprawling, multiethnic empires like Rome. Austria-Hungary and the Ottoman Turks are good modern examples. Political instability and barbarian invasions certainly had a role in Rome’s fall. Much of Rome’s power and wealth was taken to the new capital of Constantinople, leaving the old capital vulnerable.

Roman families were far from perfect. Infanticide and sexual slavery were legal. But there were certain aspects of Roman family life that helped build Rome into the empire it became. Early Roman families were what we would today call “traditional families.” They featured strong fathers, homemaking mothers and obedient children.

E. B. Castle wrote in Ancient Education and Today: “The [early Roman] boy’s upbringing was founded on a profound conviction of the power of example, first of the father himself as a representative of virtues peculiarly Roman, but also of the great prototypes of Roman valor in the boy’s family and national history who were presented to him as men worthy of admiration.”

First, at the bottom as it were of Roman society and forming its ultimate unit, was the family. … The most important feature or element of this family group was the authority of the father. … It would be difficult to overestimate the influence of this group upon the history and destiny of Rome. It was the cradle of at least some of those splendid virtues of the early Romans that contributed so much to the strength and greatness of Rome, and that helped to give her dominion of the world.

“History shows that the strength of any nation depends on the strength of its families,” wrote Mr. Flurry. “Family is the rock-solid foundation on which a country’s superstructure is erected. That was the case for both America and Britain.”

The Roman Empire reached its height in the second century a.d. Its borders expanded to its largest extent, the emperors commissioned massive building projects, and there was general political stability. Edward Gibbon called this time “the period in the history of the world [when] the condition of the human race was most happy and prosperous.” It was not unlike the Western world today, coasting on winning World War ii and the Cold War, and glutted with material prosperity.

As the empire progressed, Roman society changed. People could now have business in every corner of the Mediterranean and stay in the same country. Lucrative business opportunities tempted men on faraway journeys, spending long stretches of time away from their families.

“Added to this initial cause of family disruption was the consequent easy attitude to the marriage tie, the increasing frequency of divorce, and growing freedom and laxity in women’s morals, all of which ended in a loosening of the old family unit in which the best in Roman character had its roots,” wrote Castle.

Jérôme Carcopino in Daily Life in Ancient Rome wrote that second-century fathers “yielded to the impulse to become far too complaisant. Having given up the habit of controlling their children, they let the children govern them, and took pleasure in bleeding themselves white to gratify the expensive whims of their offspring. The result was that they were succeeded by a generation of idlers and wastrels.”

Broken families were common in this period as well. Describing this period, Carcopino quoted first-century philosopher Seneca: “They divorce in order to remarry. They marry in order to divorce.”

One of the causes of the decline in population [in the empire] was the singular aversion that the better class of the Romans evinced to marriage. … Penalties and bounties, deprivations and privileges, entreaties and expostulations are in turn resorted to by the perplexed emperors, in order to discourage celibacy and to foster a pure and healthy family life. But all was in vain. The marriage state continued to be held in great disesteem.

Even if families stayed together, that didn’t mean unity. Carcopino wrote, concerning Roman wives: “Some evaded the duties of maternity for fear of losing their good looks, some took pride in being behind their husbands in no sphere of activity, and vied with them in tests of strength which their sex would have seemed to forbid; some were not content to live their lives by their husband’s side, but carried on another life without him.”

Does any of this sound familiar?

Let’s look at a few statistics of British society. The average divorce rate in England and Wales is 33.3 percent. In 2017, almost half of all live births in England and Wales happened outside of marriage. In Scotland in 2014, the rate was over half. In 2019, about three quarters of mothers with dependent children in the United Kingdom were working. A 2017 study suggests 57 percent of British men and 54 percent of British women “admitted to committing infidelity in one or more of their relationships.”

And it’s not like Britons have a good example in their leaders. British Prime Minister Boris Johnson is on his third marriage (to his former mistress, almost 25 years his junior). He has at least one illegitimate child and refuses to disclose how many children he actually has. Matt Hancock, the former Health Secretary who was largely responsible for Britain’s drastic lockdown measures, resigned over being caught in an adulterous affair in defiance of his own social distancing restrictions. Prince Charles, the heir apparent to the British throne, divorced his first wife and married his mistress, who is set to become the monarch’s consort.

By the time of the third century, Rome had reached a crisis. Invasions by both the Persians and the Germanic tribes shook the empire. In a 49-year period, it had 20 emperors, an average reign of less than 2½ years. By comparison, 26 emperors reigned for over 250 years before that. Coups were frequent and two sizable regions of the empire broke away to form their own kingdoms. The Persians and the Germanic tribes waged warfare. The economy collapsed. Strong-armed emperors like Diocletian and Constantine would bring the empire back to relative stability and prosperity, but it wouldn’t recover its earlier grandeur. Finally, in a.d. 476, the last Western Roman Emperor, Romulus Augustulus, was deposed by the Germanic King Odoacer. Europe entered the Dark Ages.

The Roman legions at one point were unstoppable. But by the end of the empire, they were so weak they were defeated by the “barbarians.” Compare that with the British government’s attempt to recruit “selfie addicts,” “binge gamers” and “snowflakes” into the army. This is the same army that, once upon a time, defeated Napoleon Bonaparte and Adolf Hitler.

Again, there were many causes to the fall of Rome. But if strong families build strong nations, then weak families make nations vulnerable to all the other causes of collapse.

The history of the traditional family goes back centuries, even millenniums, before Rome was founded.

The traditional family is a biblical concept. And the Bible institutionalizes it in the Ten Commandments. Commands like “Honour thy father and thy mother” (Exodus 20:12) and “Thou shalt not commit adultery” (verse 14). The Ten Commandments—and the Bible as a whole—were meant as Israel’s national constitution. Strong, stable families were a law for Israel, a law meant to make them “a great nation” (Genesis 12:2).

When Rome—and Britain—kept that law, even if they didn’t know it was a law, their societies prospered. But when you break the law, the law breaks you. Rome learned that the hard way. And the Bible prophesies that Britain will soon learn the same lesson.

“Today, most people have rejected the law of cause and effect,” wrote Mr. Flurry. “We think we can discard marriage and family and suffer no consequences—but the history of Rome ought to teach us what the fruits of family breakdown are—and will be!”

To learn more, request a free copy of The United States and Britain in Prophecy, by Herbert W. Armstrong, and read “The Modern Romans.”