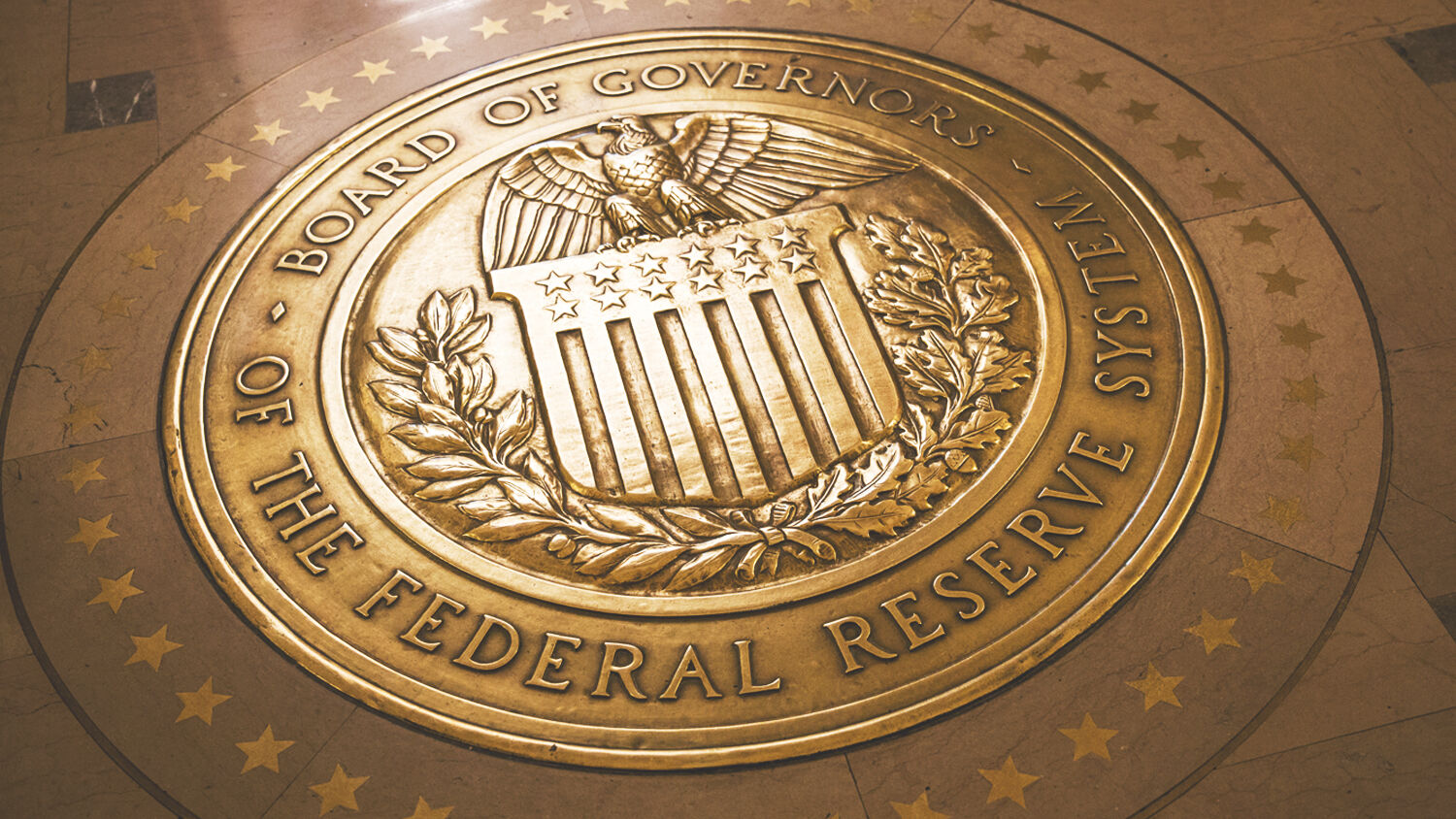 The gold-plated seal of the Federal Reserve outside the Eccles Building in Washington, D.C.
Brooks Kraft/Getty Images

A new kind of warfare is coming—whether the United States is ready or not.

The Federal Reserve has announced that the United States is moving forward with plans to design a Central Bank Digital Currency (cbdc), an idea dubbed the digital dollar or FedCoin. Now that over 3,000 atms in Beijing are offering digital yuan withdrawals, Federal Reserve Governor Lael Brainard is claiming that digital currencies could significantly alter the global financial system. The U.S. must win the cbdc race if it wants to maintain the dollar’s dominant global reserve currency status.

“Unlike central bank fiat currencies, stablecoins [cyptocurrencies backed by an asset] do not have legal tender status, so there is a risk that the widespread use of private monies for consumer payments could fragment parts of the U.S. payment system in ways that impose burdens and raise costs for households and businesses,” Brainard said on May 24. “In any assessment of a cbdc, it is important to be clear about what benefits a cbdc would offer over and above current and emerging payments options, what costs and risks a cbdc might entail, and how it might affect broader policy objectives.”

In other words, as digital currencies become popular, there is a risk that people will stop using the U.S. dollar. It is in the Federal Reserve’s best interest to offer people a digital dollar alternative.

China and the European Union have already decided that their central banks need to offer a cbdc alternative to private cryptocurrencies like Bitcoin and Diem. Now U.S. officials like Sen. Elizabeth Warren and Sen. John Kennedy believe America needs to jump on the cbdc bandwagon.

The Federal Reserve’s proposed digital dollar would be worth $1. Users would have to register their mobile phones and download an app to make deposits or transfer money, but all the information needed to verify these transactions would exist in a digital wallet. You would not even need a bank account to use these wallets, as the Federal Reserve would control the transfers.

Unlike private cryptocurrencies that operate in decentralized systems, cbdcs are issued, backed and controlled by central banks. This gives these banks—and the governments that support them—the power to monitor every digital monetary transaction. For example, China is already using a digital yuan as an Orwellian mass surveillance tool, and many fear the U.S. may follow in China’s footsteps.

Tech writer Naomi Brockwell is worried that a digital dollar could allow the U.S. government to “automatically deduct taxes,” “freeze funds more easily,” and “program money that sits in a bank account to become worthless if it sits too long in order to encourage spending.” To allay such fears, Federal Reserve Chairman Jerome Powell has been careful to note that a digital dollar would not replace cash and other payment systems. But other financial leaders disagree. Deutsche Bank stated in a November 2020 report that “in the long term, central bank digital currencies will replace cash.”

Using blockchain technology, if a citizen misses an automobile payment, he could be electronically locked out of his car. He could also be locked out of his apartment. Even his electricity or water supply could be automatically denied as soon as he stopped paying his bills. Citizens who do not pay taxes could be excluded from all public services, purportedly to prevent them from cheating the system.

The power a cashless society would give authorities over their citizens is frightening. Yet the more significant implication of a cbdc revolution may be the downfall of the Anglo-American world order.

Suppose the U.S. Federal Reserve, the European Central Bank and the People’s Bank of China started issuing cbdcs managed on a blockchain network. They would upend the currency system that has dominated the world for decades. A world of competing Central Bank Digital Currencies would set up a new kind of warfare.

Some analysts believe a digital euro or digital yuan could end the dollar’s reign as the reserve currency.

The European Union and the People’s Republic of China rely on the dollar payment system to make international financial transactions. But issuing digital euro and digital yuan would help nations move away from the dollar and bypass financial systems subject to U.S. laws. Companies and financial institutions that wanted to do business with America’s enemies could do so directly, using digital currency wallets instead of having to work via a network of banks conducting business in dollars. A Blockchain Services Network allowing digital yuan, digital yen and digital euros to be electronically traded would open up many reserve currency options.

That is one of the main reasons the Federal Reserve is looking into the possibility of launching a digital dollar: to compete in a new kind of currency warfare that is coming whether America is ready or not.

If Europe and Asia acted together, they could dethrone the dollar and revolutionize global financial markets to an extent not seen since the Chinese introduced the world to paper money.

In Isaiah’s End-Time Vision, Trumpet editor in chief Gerald Flurry explains biblical prophecies about three power blocs that will dominate the world in the end time: Tyre, Tarshish and Kittim. Tyre, he explains, represents the commercial center of the EU; Tarshish is modern-day Japan; Kittim is modern-day China. Isaiah 23:1-3 say that Tarshish will mourn when Tyre is overthrown. This shows that Japan and China will be in a close partnership with a German-led European superstate.

Other Bible prophecies, such as Leviticus 26 and Deuteronomy 28, show that the nations of Israel (the United States and Britain primarily) will be besieged until their high and fenced walls come down. This shows that the Isaiah 23 mart of nations is an anti-American alliance. Such an alliance would have no interest in trading in dollars. This means the process of international trade that the dollar currently provides will have to be replaced.

Prophecies about an end-time mart of nations are not limited to the Old Testament. Revelation 17 reveals that a religious entity will become a guiding force over an economic powerhouse that intoxicates all nations with its wealth and splendor. Revelation 18:3 says that “the merchants of the earth have become rich through the abundance of her luxury” (New King James Version). And Revelation 13:17 shows that people will be unable to buy or sell if they do not obey this religious entity. This prophecy may require blockchain-like technology to implement on a large scale.

These verses are specifically about a European financial power, but these merchants are not only active in Europe. They are doing business around the world. China and Japan will ally with a revived Holy Roman Empire to replace the current Anglo-American economic system.

Herbert W. Armstrong wrote in 1984 that a massive banking crisis in America “could suddenly result in triggering European nations to unite as a new world power, larger than either the Soviet Union or the U.S.” A new digital currency could also accompany this unification of core European nations. So American citizens probably won’t have to worry about the Federal Reserve using digital dollars as a weapon of Orwellian mass surveillance like China does; things probably won’t get that far before China and Europe start using digital currencies to block America from more and more markets.

As the 2008 financial crisis showed, a banking crisis could easily cause the dollar to collapse. America’s enemies are aware of this fact and may even try to provoke such a crisis. We have not yet seen the end of the push for new reserve currencies. Nor have we seen the end of hostility against America. Though the digital currencies and Blockchain Services Network are cutting-edge technologies, the economic trends unfolding today were prophesied thousands of years ago in your Bible!

Yet there is good news connected to these looming financial crises. To understand, order your free copies of Isaiah’s End-Time Vision and Ezekiel—The End-Time Prophet.