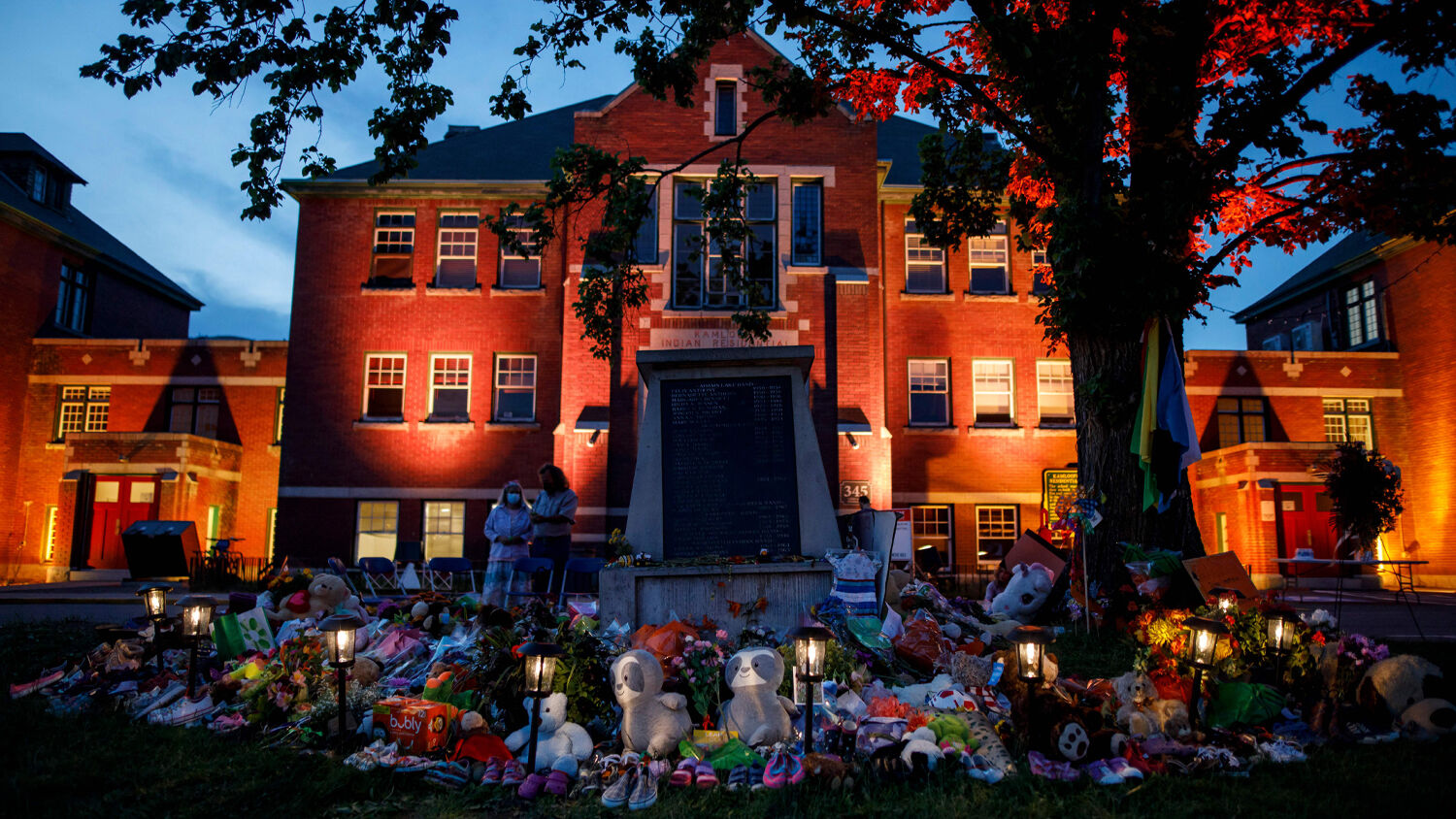 A mass grave of 215 children was found at the former Kamloops Indian Residential School in Kamloops, British Columbia. The bodies were discovered through the use of ground-penetrating radar. Some of the bodies were of children as young as 3 years old.

Indian Residential Schools was a system of boarding schools throughout Canada, run by various church groups but funded by the Canadian government. Their purpose was to assimilate Canadian aboriginal (“Indian”) youth into European culture and society. The school in Kamloops was the largest. It was operated from 1890 to 1978, mostly by the Roman Catholic order, the Oblates of Mary Immaculate. After 1969, it was operated by the Canadian federal government.

It has sometimes been argued that empires established law and order and maintained lengthy periods of peace. But the idea of a Pax Romana or Pax Britannica—extended eras of peace established under the benevolent rule of the Roman or British empires—is largely a myth, the product of imperial self-promotion. Empires were established militarily …. Colonies were established to be exploited economically. … The benefits of empire went largely to the imperial power rather than to the conquered nation.

The British Empire, like any empire, was not infallible. But to paint British colonialism as an inherently evil institution is a gross distortion of the empire’s mostly positive legacy. You can read more about that here.

But that doesn’t mean bad things weren’t happening. Introducing Western ways of life and education to more undeveloped regions wasn’t wrong. But residential schools were not the way to do so.

Government agents removed children from their homes and sent them to the schools. The schools denied parents access to visit their own children. This, under normal circumstances, would be considered kidnapping. It’s estimated that 150,000 children were taken from their families between 1883 and 1996.

The schools were operated by the Anglican, Presbyterian, United and Roman Catholic churches. The Catholic Church operated the majority. In restricted communities, many of them isolated from major population centers, the clergy-run schools could often do what they wanted, sometimes even against the wishes of suspicious Indian Affairs agents.

Many of the accounts from residential schools sound like horror stories from a Third World country. Torture and sexual abuse—including same-sex sexual abuse—were rampant. Children were often whipped, sometimes to the point of bleeding. St. Anne’s Indian Residential School in northern Ontario, operated by the Catholic Church, tortured children with a homemade electric chair.

Records indicate at least 51 children dying between 1914 and 1963 at the school in Kamloops. Where the 215 newly discovered bodies fit into this is a mystery.

“This is not a mass grave site but rather unmarked burial sites that are, to our knowledge, also undocumented,” said Chief Casimir.

In 2008, then Canadian Prime Minister Stephen Harper apologized on behalf of Canada for the residential school system. That was also the year the Truth and Reconciliation Commission was set up. It released its findings in 2015.

The Anglican, Presbyterian and United churches have also apologized.

The Roman Catholic Church has not apologized, even though it ran the majority of residential schools and even though many of the most egregious abuses were committed in Catholic-run schools.

Yet according to Lionel Grendron, president of the Canadian Conference of Catholic Bishops, the pope “felt that he could not personally respond” to calls for an apology.

The discovery of the mass gravesite has renewed calls for a papal apology.

“As a Catholic, I am deeply disappointed by the position that the Catholic Church has taken now and over the past many years,” said Prime Minister Trudeau. “When I went to the Vatican a number of years ago I directly asked His Holiness, Pope Francis, to move forward on apologizing, on asking for forgiveness, on restitution, on making these records available, and we’re still seeing resistance from the church, possibly from the church in Canada.”

Trudeau also criticized the church in how it keeps records about the schools hidden. “We expect the church to step up and take responsibility for its role in this and be there to help with the grieving and healing including with records,” he said. “It’s something the United Church and others have done. It’s something we are still waiting for the Catholic Church to do.” Trudeau even stated he had “tools” to use if the Vatican doesn’t release documents.

The archdiocese of Vancouver promised to release any records under its jurisdiction. No similar statement or action has come from the Vatican though.

Pope Francis did say he was “expressing [his] sympathy” to Canadians following the latest news. That almost sounds as if the institution he runs wasn’t directly involved with the incident.

Catholic entities were required to pay $21 million in a settlement for survivors. They only raised $3.1 million.

This is only one scandal among many plaguing the Vatican in recent years. In 2009, an investigation revealed the church-ran school systems in Ireland committed similar atrocities as the residential schools did. Last year came the revelation that the Catholic Church collaborated with Nazi Germany more than most realized. And then there is the sexual abuse scandals surrounding former Cardinal Theodore McCarrick.

Despite all this, the Catholic Church is still the world’s largest religion, with more than 1.3 billion followers. Millions visit Rome each year to ogle the grandeur of Saint Peter’s Basilica and the Sistine Chapel. A 2021 YouGov survey found Pope Francis the third-most famous person among Brits. In the eyes of many, the Catholic Church remains a lamb-like pillar of virtue and righteousness worldwide.

Why such a dichotomy?

“Have you ever seriously considered the origins of the world’s largest religion?” asks Trumpet contributing editor Brad Macdonald in his free book The Holy Roman Empire in Prophecy. “Despite its global ubiquity, colossal fame, material splendor and long history, the Catholic Church is an enigma. Even to lifelong Catholics.”

Each summer more than 20,000 visitors—tourists presumably interested in Catholic history—walk through the Vatican’s museums every day. But if you stood outside these museums and asked people to explain the true origins of the Catholic religion, most couldn’t give a satisfactory answer. Even most devout Catholics are unable to provide a clear, convincing explanation of the identity of their religion. Most Catholic priests and historians will stumble when asked to reconcile what they believe about their religion and its doctrines with what the Bible teaches. Very few can clearly explain when Catholicism came into existence, where the religion began, who its earliest forefathers were, or the origins of its major practices.

The Catholic religion is the most famous Christian religion on Earth, yet it is shrouded in mystery.

It doesn’t have to be a mystery. You can understand the mystery of the Catholic Church. But you have to know where to look.

A good place to start is ordering a free copy of The Holy Roman Empire in Prophecy.