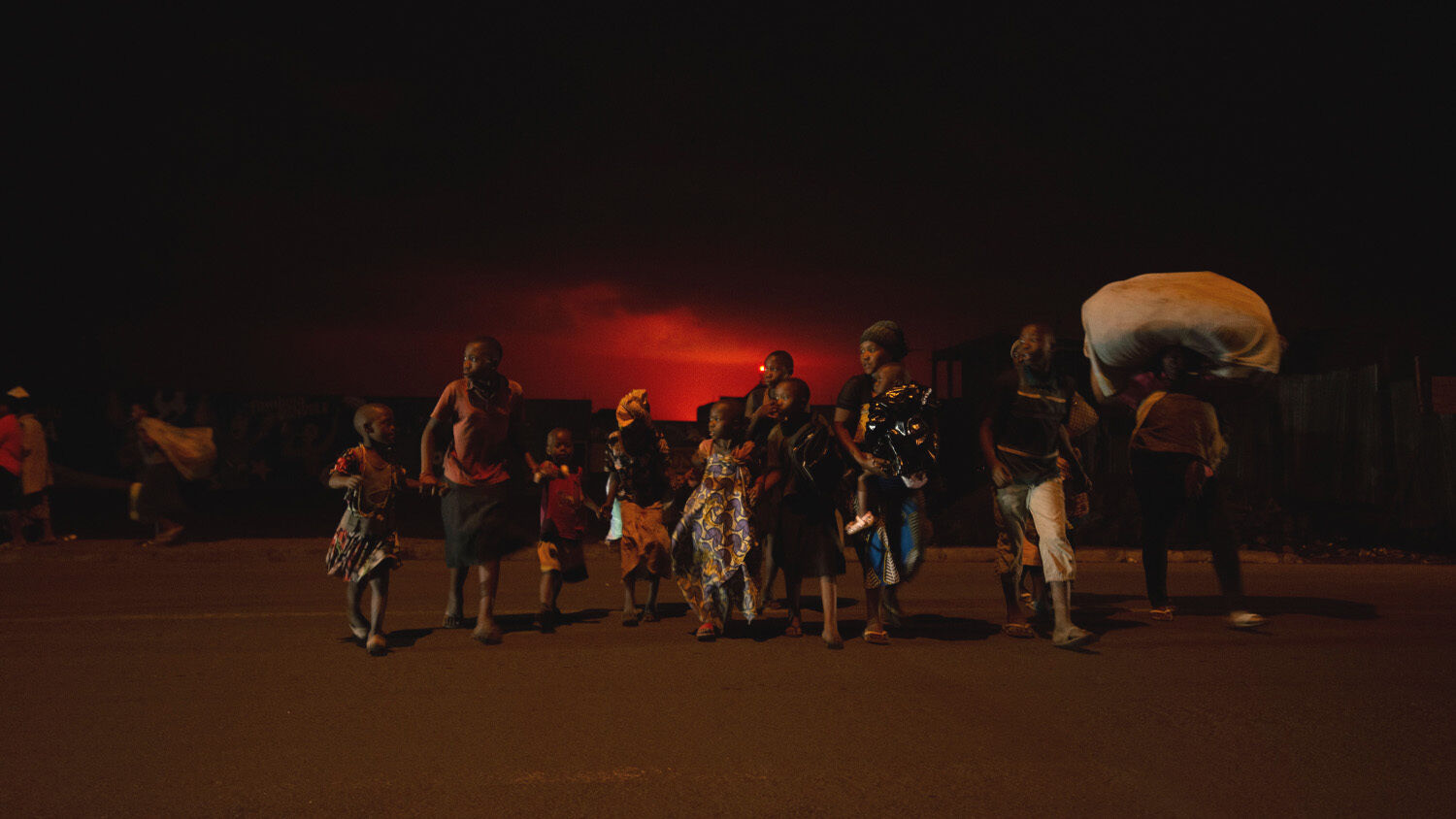 Goma residents leave the city following a sudden activity of the Nyiragongo volcano on May 22.
GUERCHOM NDEBO/AFP/Getty Images

A melting mountain in the heart of Africa.

Mount Nyiragongo, a volcano in the eastern Democratic Republic of the Congo, erupted May 22–23. Nyiragongo is one of the world’s most active volcanoes; famed naturalist David Attenborough called it “the largest lava lake in the world.” A river of lava half a mile wide flowed toward Goma, a city of up to 2 million people.

The lava flow solidified upon reaching the city limits. But only after about 30,000 people fled, including thousands who crossed the border into neighboring Rwanda. As of May 27, there have been 32 reported deaths and about 20,000 people made homeless. Three villages outside of Goma were destroyed.

The lava flow almost made its way to Goma’s airport; as of May 25, the airport remains closed. The road between Goma and the town of Rutshuru is also blocked. This is one of the major thoroughfares to deliver humanitarian aid to the rest of the Democratic Republic of the Congo.

There are still concerns that Nyiragongo could erupt again. “Right now we can’t rule out an eruption on land or under the lake, which could happen very soon and without warning,” said military governor Constant Ndima. Toxic gasses dissolve under the lake that Goma sits next to, Lake Kivu. There is a risk that those gasses could escape the lake.

“Current data on seismicity and the deformation of the ground indicate the presence of magma under the urban area of Goma, with an extension under Lake Kivu,” said Ndima.

Aftershocks are also occurring. Two strong ones hit the region on the night of May 26, causing panic. Evacuation orders are still in place.

The Nyiragongo eruption could have been much worse. Most of Goma wasn’t impacted by the eruption, aside from evacuation orders. But this volcanic eruption isn’t a one-off; 2021 seems to be becoming the “year of volcanic eruptions.”

On April 13, a double volcanic eruption hit the tiny Caribbean island nation of St. Vincent and the Grenadines. As big as the eruption was, the damage to lives and infrastructure was minimal. But it put the small country’s tourist-based economy in a precarious situation.

Italy’s Mount Etna, Europe’s most active volcano, erupted for the 19th time this year on May 21. More volcanic activity has also occurred in Iceland. Fagradalsfjall, near Reykjavik, erupted for the first time in recorded history in March. It’s not impacting sparsely populated Iceland too much. In fact, the owners of the land where Fagradalsfjall is located received numerous purchase offers; apparently, erupting volcanoes are prime real estate.

None of these instances have resulted in mass catastrophe. But they could have. Had Mount Nyiragongo’s lava flow continued, it would have flooded a large city. St. Vincent and the Grenadines is a small island; it wouldn’t have taken much for the volcano to smother it.

The risk volcanoes pose to populated areas is larger than most people think. Seattle, with a metropolitan population of almost 4 million, sits right next to an active volcano, Mount Rainier. Mount Vesuvius, famous for destroying the ancient Roman city of Pompeii roughly 2,000 years ago, is still active and is within range to hit Naples. Mount Fuji, which neighbors greater Tokyo’s 38 million people, is still an active volcano. What happens if one of these volcanoes erupts?

Add to that all the other natural disasters that have pummeled the world since the start of the year. Floods devastated eastern Australia in March. Cyclone Tauktae, the latest in a growing number of bigger and bigger storms, battered India this month. Northern California received a “red flag” fire warning, the first time a red flag warning was given for the region this early in the year since 2014.

There seems to be something wrong with the weather.

When disaster strikes, a common scapegoat is man-made climate change. The normal disasters people attribute to climate change include events like floods and hurricanes. Some people are even claiming climate change could cause an increase in volcanic eruptions.

Some also credit climate change with causing everything from sinkholes to tsunamis to wars.

Climate change can’t be responsible for anything and everything that happens to the planet. People throw the term “climate change” around indiscriminately as if it’s the cause of all the ills of the planet.

Yet the size and frequency of natural disasters is increasing. There has to be something more to it than just climate change.

To find out what it is, request our free booklet Why ‘Natural’ Disasters?