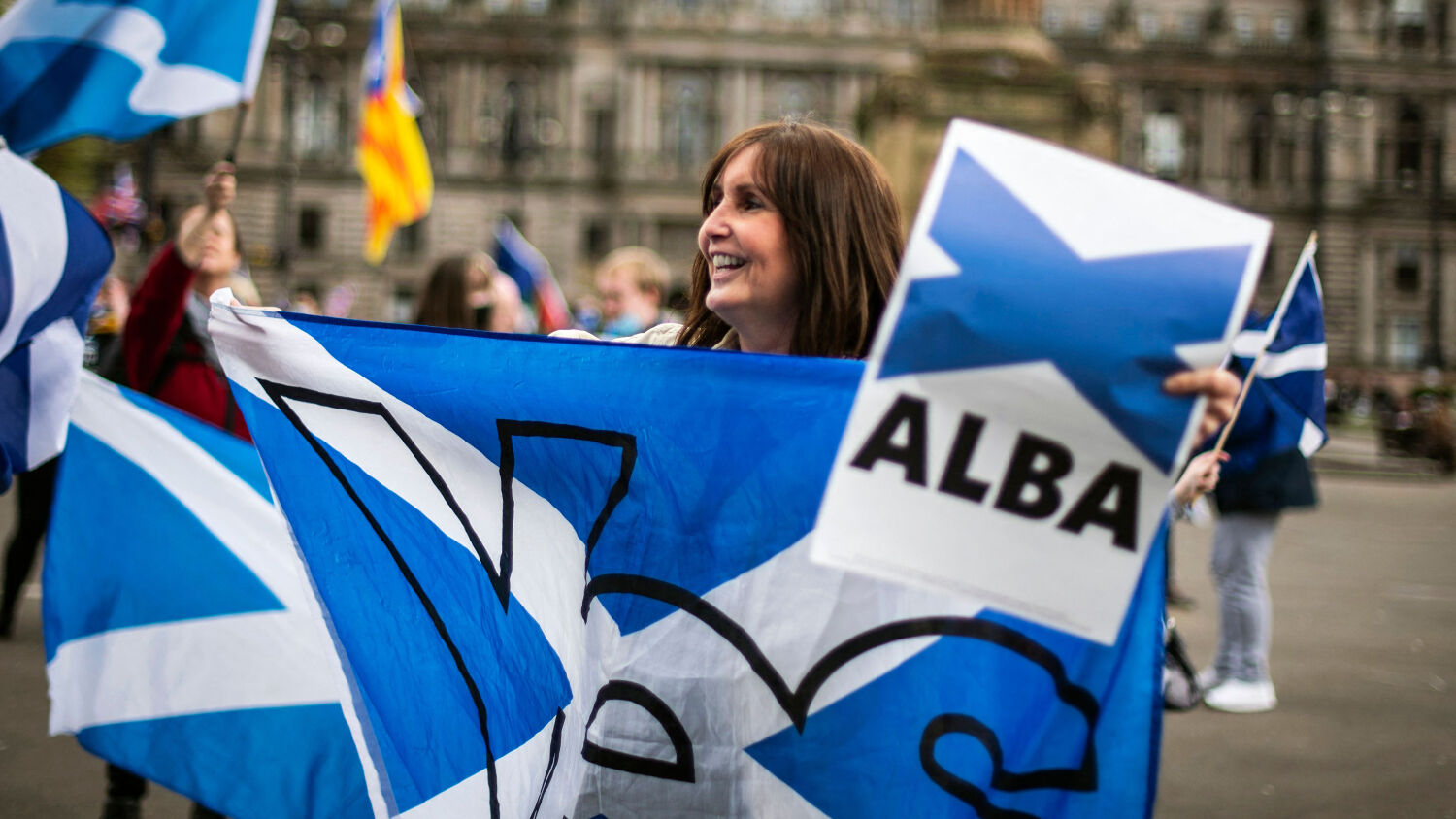 Pro-independence protesters gather in George Square in Glasgow on May 1.
NDY BUCHANAN/AFP/Getty Images

Will the 300-plus years of union between England and Scotland come to an end?

Scotland concluded its Scottish Parliament elections on May 6. The Scottish National Party (snp) is in power. A party needs 65 seats to govern with a majority in the Scottish parliament. The snp received 64. Prior to the latest election, snp leader Nicola Sturgeon governed through a minority government. While she still has a minority, it is less of one. The latest elections let Sturgeon hang onto power.

The snp’s main policy objective is Scottish independence from the United Kingdom. Scotland held an independence referendum in 2014, where a majority voted to remain in the UK. But that was before Brexit. In the 2016 Brexit referendum, both England and Wales voted to leave the European Union. Northern Ireland voted to remain by a margin of 55.8 percent to 44.2 percent. Scotland voted 62 percent—almost two thirds of all who voted—to remain in the EU. Not a single county in Scotland voted to leave.

Scotland, as a part of the UK, is now out of the EU. But the Scottish government has been itching to get back into Brussels since. Earlier this year, Sturgeon ordered all British flags be removed from Scottish government buildings. They were replaced with the EU flag.

Now that Sturgeon’s political power is secure, a second independence referendum is her top priority. She told British Prime Minister Boris Johnson that a second referendum is “a matter of when, not if.” No referendum is legal without consent from the British government, however. Johnson has said he will disregard Edinburgh’s push for a new vote. “I think a referendum in the current context is irresponsible and reckless,” he told the Telegraph.

Scottish voters are apparently not too eager for another referendum. A YouGov survey sponsored by the Times of London suggests that an independence referendum ranks only as their fifth-highest government priority. The top four priorities, according to the poll, were health, the economy, education and the environment.

Nevertheless, the Scottish Green Party also supports an independence referendum. Combined with the Greens, Sturgeon has enough legislators to support another referendum.

What is the main reason many Scots want out of the UK?

“When I went to Edinburgh to cover the Scottish Independence Referendum of 2014, I was ready with my tin hat,” wrote Andre Walker for the Observer. “I expected a strong dose of anglo-phobia and was even worried about whipping out my English accent in pubs.”

“Instead, I discovered a nation of Scandinavian social democrats determined to live in an oil rich, big state utopia like Norway. “They envied ‘nanny states’ like Sweden and Denmark and dreamt of a day they could follow them.”

The English, meanwhile, are more conservative in their outlook. They support limited government. They voted to leave the European Union. They overwhelmingly voted conservative in the last general election. They voted for a prime minister who declared a “war on woke,” meaning protecting statues from removal, defending Britain against accusations of systemic racism and other attacks on traditional culture from the radical left—a prime minister the Scots can’t stand almost as much as they can’t stand Margaret Thatcher, another English icon.

England contains the vast majority of the UK’s population. The English, therefore, have the most seats in Parliament and the most influence over public policy—no matter how many extra seats are disproportionately given to Scotland, Wales and Northern Ireland.

Basically, many Scots are sick of being attached to the conservative bandwagon steered by England. They want the restraints to their Scandinavian dream removed.

Even though this means disavowing the foundations of much of Scottish history and culture. They cry for Nordic model socialism even as Edinburgh was the birthplace of Adam Smith’s capitalism. They disavow the legacy of the British Empire even as the Scottish were one of its chief architects. They decry English militarism when some of the greatest British war heroes were Scots. They reject religion when the most important Bible in the English world for over 400 years was commissioned by a Scottish king.

In short, Scotland has forgotten what it means to be British.

And the Scots are one vote away from dissolving the last remnant of the greatest empire in history—both in size and in achievement.

But what’s so special about being “British,” anyway? What does that even mean?

And what made the British Empire so great? How did two small countries stuck on an island together create an empire that changed the world? Why did that empire disintegrate quicker than it formed?

Late educator and theologian Herbert W. Armstrong asked similar questions in his most popular book, The United States and Britain in Prophecy. “How great, how powerful, and how wealthy did the British and American people become? And what is suddenly happening to us now? Why has Britain already lost most of her colonies—her possessions—her resources, wealth, power and influence in the world? Why is Britain no longer considered Great Britain—a great world power?”

There is a cause for every effect. The effect today is Britain—once the biggest empire in man’s history, now on the verge of voting itself out of existence. The cause is deeper than growing animosity between the English and the Scottish. The cause isn’t a mismanaged economy. The cause isn’t changing demographics.

Find out what the cause is for yourself by requesting your free copy of The United States and Britain in Prophecy.