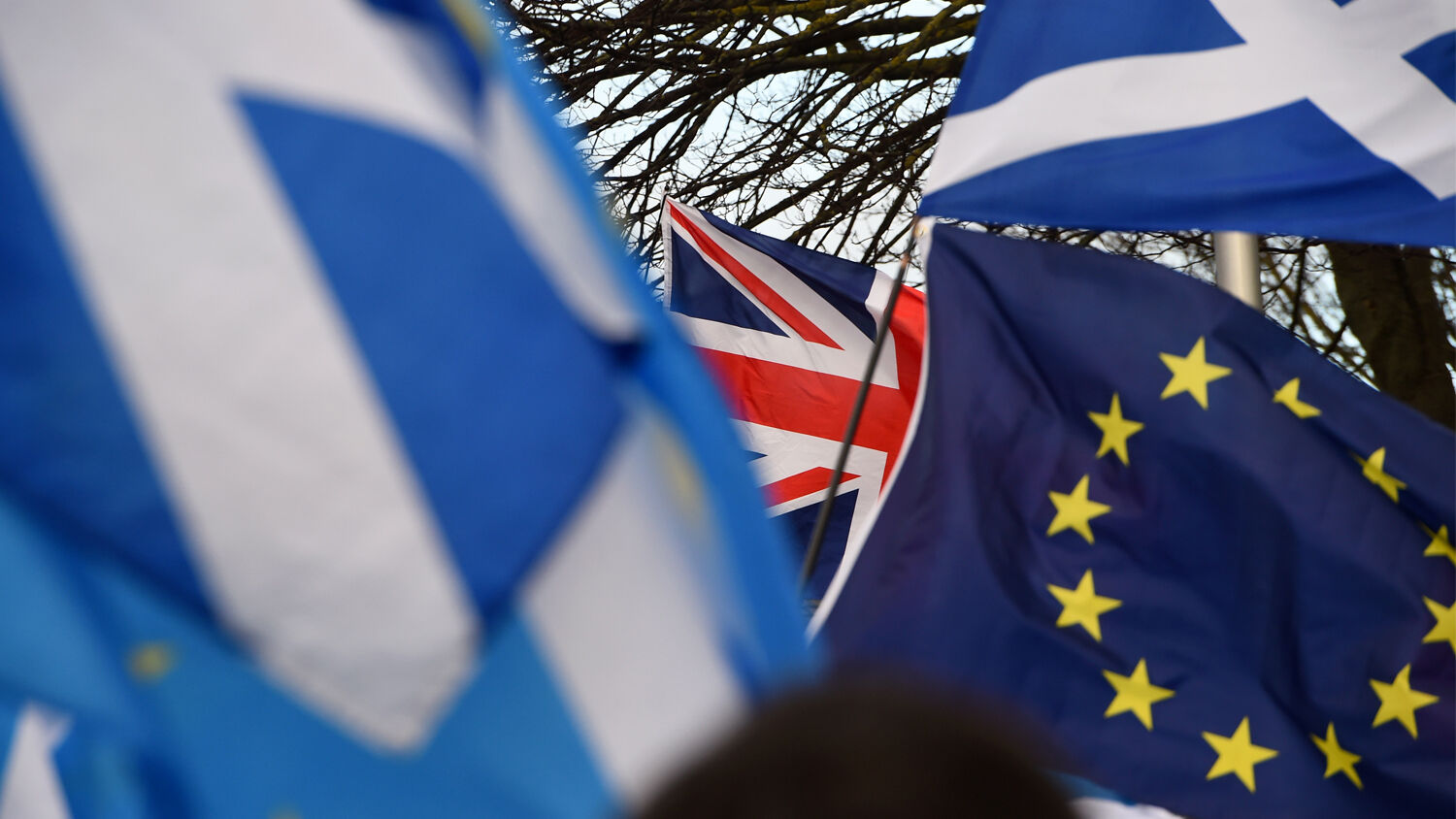 Pro-Union activists wave a Union flag (C) as Scottish Saltire and EU flags fly during an anti-Conservative government, pro-Scottish independence, and anti-Brexit demonstration outside Holyrood, the seat of the Scottish Parliament in Edinburgh.
ANDY BUCHANAN/AFP/Getty Images

Once-great Britain is now a small island getting smaller.

The British Empire was the largest empire the world had ever seen. It influenced history, culture and society in a manner not seen since ancient Rome. The British Empire is long gone now, apart from a few vestiges like Gibraltar and the Cayman Islands. And it appears that Great Britain itself is on the path of dissolving as an entity.

What formed Great Britain in the first place? The Acts of Union in 1706–1707 between the parliaments of the Kingdom of England (including Wales) and the Kingdom of Scotland. This formed the foundation of union with Ireland in 1801, forming the United Kingdom.

But in 2014, the Scottish government held a referendum to undo its 300 years of union with England and Wales. Scots voted to remain (55.3 percent to 44.7 percent).

But in recent days, the Scottish government has been pushing harder than ever to reverse that decision.

Fast-forward five years. The United Kingdom has finally, officially left the European Union. But many Scots want to find a way back in. Chief among them is Scottish First Minister Nicola Sturgeon. In October, she wrote an opinion article for Die Welt that lambasted the Brexit transition process and expressed her desire for Scotland to rejoin the EU even at the cost of breaking away from the United Kingdom. Some of her reasons were the EU’s “fundamental values.” She listed “respect for human dignity and human rights, freedom, democracy, equality and the rule of law”—as if those are not the values of the United Kingdom.

The British invented the modern concept of democracy, banned the slave trade practically singlehandedly, enshrined equality under the law through the Magna Carta, and helped liberate continental Europe from tyranny more than once. Because of the British Empire, the world has functioning democracies from Canada to Australia to India to the Caribbean. Places in the non-Western world formerly colonized by Britain, like Hong Kong and Singapore, have much higher standards of living compared to their neighbors.

Meanwhile, some of the pillar countries in the European Union gave the world Napoleon Bonaparte, Benito Mussolini and Adolf Hitler.

But that didn’t stop First Minister Sturgeon from ordering all Union Jacks to be taken down from Scottish government buildings this month and replaced by European Union flags—even though Scotland has no political or legal connection to the EU and has a 315-year political and legal connection under the Union Jack.

Normally, a brazen decision like this would be considered an act of insurrection. Over history, untold numbers of men have died for a flag and what it stands for.

One might think that this is just the reckless behavior of one individual. But much of Scotland evidently stands by Mrs. Sturgeon’s side. In May’s Scottish elections, the media is projecting that Mrs. Sturgeon’s Scottish National Party will increase its number of seats from a plurality to an outright majority.

And what will Mrs. Sturgeon do if she hangs onto power?

“That’s democracy,” she said on a bbc One interview. “It’s not about what I want or what [UK Prime Minister] Boris Johnson wants.” She claims this despite the fact that the Scottish government in 2014, of which she was deputy first minister, publicly announced that it would respect the results of the referendum.

Together, the English and Scottish peoples built the largest and greatest empire the world has ever seen. Without Scotland, there would be no United Kingdom and no Great Britain. But Nicola Sturgeon continues her campaign of multiple referenda and painting the nation that has had “respect for human dignity and human rights, freedom, democracy, equality and the rule of law” as if it hasn’t. Dissolving the United Kingdom seems to be the only thing that could make her and her supporters happy.

How did the largest and best empire in the history of man, which came out on top in almost every major conflict in modern history, fall into the shambles it is today?

To know the answer, you have to know how Britain received its greatness in the first place.

“It may not be generally realized—but neither Britain nor the United States became great world powers until the 19th century,” wrote late educator Herbert W. Armstrong in The United States and Britain in Prophecy. “Suddenly, in the very beginning of the 19th century, these two—until then small, minor countries—suddenly spurted to national power and greatness among nations, as no nations had ever grown and multiplied in wealth, resources and power before.”

How did that happen? Was there any reason or purpose behind it?

Why did the Union Jack represent a comparatively minor nation until a certain time period, then suddenly multiply in greatness as a “company of nations,” ruling “thousands of millions,” benefiting from “the precious things of heaven [climate],” “the precious things of the earth,” possessing “the gate of his enemies” and fulfilling dozens of other specific prophecies of the Bible?

And how did Britain devolve into the state it’s in today? Is there any hope ahead?

To answer these questions, begin by reading The United States and Britain in Prophecy, Chapter 12.