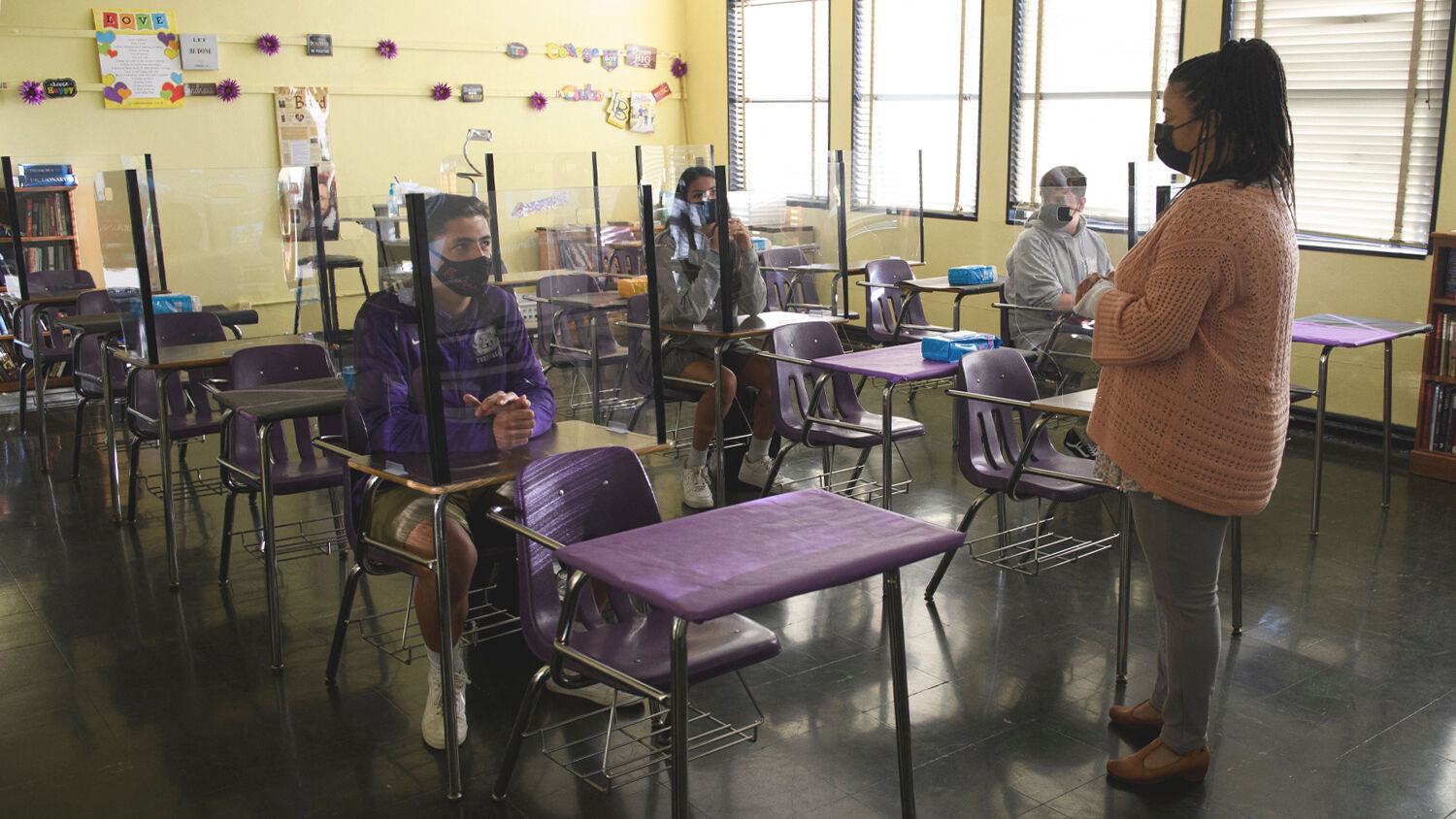 America is in the middle of an ideological bloodbath. But amid all the violence and casualties, one question remains: What is the truth?

Children at Hollywood’s Harvard-Westlake high school are being indoctrinated in “left-wing nonsense” that has been described as “wokeness gone mad,” according to an April 18 Daily Mail exposé. The $43,000-a-year school is home to the children of Hollywood’s elite. But the new report shows that even Hollywood’s left-leaning parents are increasingly frustrated by the woke changes to the school’s curriculum.

“There is a growing group of parents who are desperately unhappy with how things are going,” one mother said on the condition of anonymity. “But we talk in secret.”

At the heart of the controversy is Harvard-Westlake’s new Diversity, Equality and Inclusion program. It has mandated that teachers attend a training course taught by Bettina Love, a critical race theorist who believes “[r]acism runs deep in America and blacks alone know who America really is.” She also believes that schools intrinsically perpetuate anti-blackness and the “spirit murder” of black students.

And so, the curriculum is being overhauled. Instead of learning about the Treaty of Versailles and the Columbian Epoch, students are only learning about the women’s liberation movement and the Black Lives Matter movement. Several schools, including the expensive Harvard-Westlake, have banned “white” literary texts, such as To Kill a Mockingbird and Little Women. Even Shakespeare is close to receiving the boot. His work is treated with suspicion as though he were a controversial figure. They have been replaced by texts such as Stamped and Racism, Anti-Racism and You.

Grace High School, a $57,000-a-year high school in New York, recently published an “Inclusive Language Guide” that calls for the elimination of phrases such as “mom and dad” or “ladies and gentlemen” and even “boys and girls.” Instead, students are encouraged to say “people, folks, friends, readers, mathematicians.”

Terms like “hermaphrodite,” “transsexual” and “crossdresser” were also banned in favor of “intersex.” This is all because even though the school recognizes “hateful language that promotes racism, misogyny, homophobia and other forms of discrimination are already addressed in our school handbooks, we also recognize that we can do more than ban hateful language; we can use language to create welcoming and inclusive spaces.”

This “woke weaning,” as the Telegraph called it, is rapidly becoming a domineering educational ideology. And Hollywood parents, unwilling to commit career suicide, are afraid to question it.

What About the Children?

The main victims of this woke education revolution are children, both white and black.

“Now my children learn about ‘movements’—the civil rights movement, the women’s liberation movement, the Black Lives Matter movement,” one parent said. “I have no objection to any of that, but children are not getting the basic grounding. Worse, they are being fed a diet of left-wing nonsense, which isn’t preparing them for reality. It makes me wonder why I’m spending nearly $50,000 a year to have them indoctrinated against me?”

White children are even being indoctrinated against themselves. Black students are being encouraged to gather in “safe” groups during breaks and lunch. This infers a “safety” from the white students. Such an approach is damaging not only to the white students but to the black ones too.

As one mother said, “My daughter said, ‘Mommy, if I’m a racist does that mean no one will want to come to my birthday party?’ She’s being educated in fear and that’s a very dangerous path to go down. She goes to one of the most expensive schools in LA, but the black pupils there are being taught to see themselves as victims. They are being told they are oppressed but they are living the most elite, charmed lives ever. Can that be good for them? There is something fundamentally wrong with the way things are going, and if it’s happening in Hollywood today it will be happening elsewhere tomorrow.”

Nobody is safe from the woke revolution. Paul Rossi, a teacher at Grace Church High School, has learned as much.

He tried to assign the writings of Glenn Loury, Harvard’s first black tenured professor of economics, to his students. He wanted to expose them to a different voice “whose writings expressed a nuanced, center-right position on racial issues in America.”

Here’s what Rossi wrote in an open letter on the issue:

Unfortunately, my administration put the kibosh on my proposal. The head of the high school responded to me that “people like Loury’s lived experience—and therefore his derived social philosophy” made him an exception to the rule that black thinkers acknowledge structural racism as the paramount impediment in society. He added that “the moment we are in institutionally and culturally, does not lend itself to dispassionate discussion and debate,” and discussing Loury’s ideas would “only confuse and/or enflame students, both those in the class and others that hear about it outside of the class.” He preferred I assign “mainstream white conservatives,” effectively denying black students the opportunity to hear from a black professor who holds views that diverge from the orthodoxy pushed on them.

If the rich and powerful have little control over what their children are taught, what chance does the rest of America have? America is in a war of ideologies—a war the left is winning. Parents are afraid to publicly enter the fray. And children, regardless of race, religion, creed or sexual orientation, are the unsuspecting casualties.

Amid this ideological bloodbath, one question remains: What is the truth?

An Attack on Truth

“Antiracist” training sounds righteous, but it is the opposite of truth. It requires teachers like myself to treat students differently on the basis of race.

My school, like so many others, induces students via shame and sophistry to identify primarily with their race before their individual identities are fully formed.

Students are pressured to conform their opinions to those broadly associated with their race and gender and to minimize or dismiss individual experiences that don’t match those assumptions. The morally compromised status of “oppressor” is assigned to one group of students based on their immutable characteristics.

In the meantime, dependency, resentment and moral superiority are cultivated in students considered “oppressed.”

This approach to education is creating two racial monoliths. It intends to raise up white children who view themselves as racist oppressors because they are white. And it is raising up a group of ethnic minorities who view themselves as superior, while being oppressed victims. All the while, they are being deprived of any voices—whether white or black—that say otherwise. They are deprived of any voices that tell the truth.

If America were as racist as children are being taught, there wouldn’t be black and Asian students at Harvard-Westlake high school. They wouldn’t have that opportunity for such privilege. America wouldn’t have the 13th Amendment. It certainly wouldn’t have elected a black president for two terms, winning both the electoral college and the popular votes by a significant margin.

Many thought that having a black president would be a testament to how far America has come in solving its race issues. As Trumpet editor in chief Gerald Flurry states in his booklet America Under Attack:

If you recall, many people said having a black leader would solve our nation’s racial problems. Has it? It has done the opposite! … Racist accusations are flying and getting far worse each year!

Every week it seems, mainstream media and radical Democrats are talking about Republicans being racist. In almost every case, they’re lying and they know they’re lying. That is sick and satanic to the core!

Today we frequently hear racist remarks on television and radio. One black tv commentator on nbc said, “This is no country for young black men!” Won’t that stir up hatred? That is a very ugly and dangerous statement.

What will be the outcome of such racist remarks? When you accuse people of racism without any proof—which most of them don’t have, they just spout out the words—you’re filling your country with hatred and division that leads to civil war and violence! These commentators are either ignorant of what they are doing—or they want a race war. Some extremists do want a race war. And Bible prophecy tells us that they are going to get one.

“And judgment is turned away backward, and justice standeth afar off: for truth is fallen in the street, and equity cannot enter. Yea, truth faileth; and he that departeth from evil maketh himself a prey: and the Lord saw it, and it displeased him that there was no judgment” (Isaiah 59:14-15).

The source of the attack on truth is Satan the devil, the father of lies (John 8:44). As the “prince of the power of the air,” it is his influence on the world that is behind the lies plaguing society, destroying our children (Ephesians 2:2). Many see the lies, but are too afraid to stand up for the truth, lest they “make themselves a prey.”

And so, the lies continue to spread, the division continues to grow—as do the race-fueled riots and protests. After the Baltimore riots in 2015, Mr. Flurry wrote: “The rioting in Ferguson and Baltimore is just a type of what is going to happen to major cities in the whole nation! It is a stark prophecy of our future!” This nation is about to be engulfed in race riots worse than ever before.

But there is good news too.

“This world is about to see the end of all liars, racists and hatemongers,” Mr. Flurry writes. “They will soon be obliterated from this Earth. That is why Satan is in a rage—because he knows his time is running out!”

There is hope for this world. The lies are going to get a lot worse before they get better. But soon, there will be lies no longer. The true word of the Bible declares that fact. To learn about this truth, to learn about a world without lies, racism and violence, please request our free booklet The Wonderful World Tomorrow—What It Will Be Like.