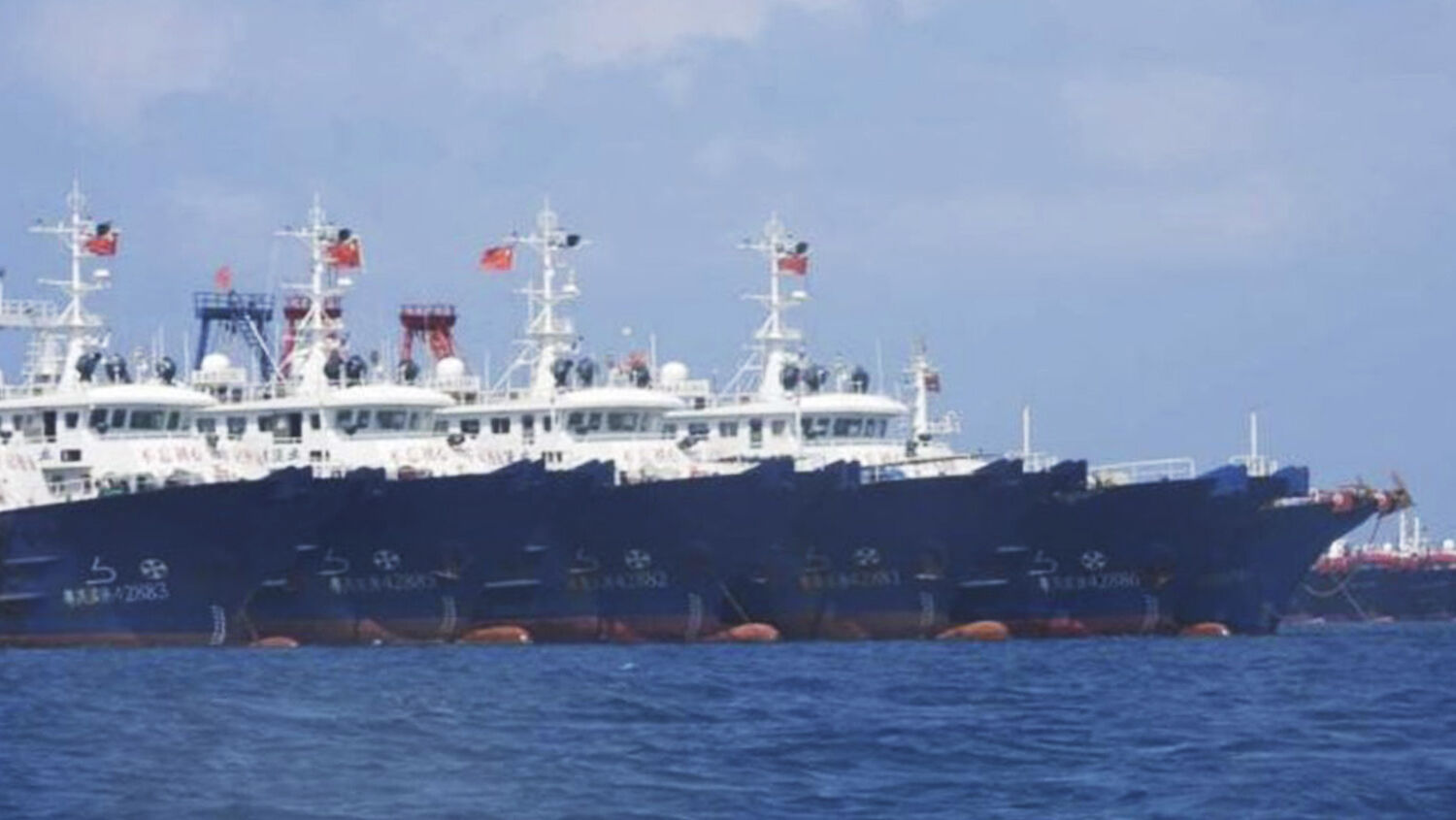 ‘[A] clear provocative action of militarizing the area’

The Philippines called on China on March 21 to withdraw 220 vessels moored in line formation near Julian Felipe Reef. The ships have been lashed together around the boomerang-shaped reef since at least March 7. Though the vessels are nominally fishing boats, their crews have not engaged in any fishing and are believed to be part of China’s Maritime Militia.

“We call on the Chinese to stop this incursion and immediately recall these boats violating our maritime rights and encroaching into our sovereign territory,” read a statement by Philippine Defense Secretary Delfin Lorenzana. “These are territories well within Philippine exclusive economic zone and continental shelf, where Filipinos have the sole right to resources under international law and the 2016 arbitral ruling.”

International law based on the United Nations Convention on the Law of the Sea (unclos) says waters within 200 nautical miles of a country’s coast are included in the nation’s “exclusive economic zone.” And the Permanent Court of Arbitration at The Hague reinforced unclos in 2016, saying China’s man-made islands in the South China Sea do not qualify as actual islands and, as such, could not give Beijing claim to “territorial sea” around them.

As Lorenzana said, these laws place Julian Felipe Reef (internationally known as Whitsun Reef) well within Philippine territory. But China ignores international law and claims nearly the entire South China Sea, including sections that rightfully belong to not only the Philippines but also Brunei, Indonesia, Malaysia, Taiwan and Vietnam.

His ministry is now coordinating with the National Task Force for the West Philippine Sea, the Philippine Coast Guard and the Department of Foreign Affairs to respond to China’s unlawful incursion. And the United States, a treaty ally of the Philippines, said on March 23 that it backed Manila’s demands for China to back down.

But China will not be deterred by words alone. And the fact that China is using vessels that officially have civilian rather than military status complicates any potential military response by other countries.

In 2012, the Philippine Navy caught a group of Chinese fishing ships anchored at Scarborough Shoal, some 550 miles from the closest Chinese land and well within the Philippines’ exclusive economic zone. Philippine authorities boarded the vessels and found that the crews had illegally kept considerable quantities of endangered marine species. But before they could make any arrests, two Chinese Coast Guard ships arrived and worked with the fishing vessels to cordon off the mouth of the lagoon.

A 10-week-long standoff ensued. Throughout the period, warships from the People’s Liberation Army Navy floated on the horizon, broadcasting a silent signal of the force Beijing was willing to use.

Finally, the U.S. stepped in and brokered what it put forth as an agreement for both sides to withdraw and return to the status quo ante. As stipulated by the deal, the Philippines pulled its ships out. But China did not honor its end of the agreement. Instead, it kept its vessels at Scarborough Shoal, and they remain there on patrol to this day.

“[T]here was no question that Beijing had scored a tactical victory at Manila’s expense by successfully seizing and occupying the disputed area,” Ely Ratner, deputy director of the Center for a New American Security’s Asia-Pacific Security Program, wrote for the National Interest on Nov. 21, 2013.

Ratner and other analysts agree that if China had captured Scarborough with overt military or Coast Guard vessels, it would have likely prompted a weightier response from the U.S. and considerable international backlash. But since Beijing used nonmilitary vessels as the front line, the skirmish remained in a gray zone.

And the gray zone—where nations clash without breaking into conventional warfare—is exactly where China wishes for its South China Sea territorial grabs to take place. Thanks largely to this approach, Beijing won this gray-zone conflict and Scarborough Shoal now effectively belongs to China.

Now a similar situation could be playing out at Julian Felipe Reef.

Many onlookers are not overly alarmed by China’s increasing assertiveness in the South China Sea, because the features it is taking over are not viewed as significant. As Ratner said, “From their vantage point, accommodation is preferable to risking war over ‘a bunch of rocks.’”

But Trumpet editor in chief Gerald Flurry has said that China’s gradual takeover in this region “should alarm the world,” because it is heading toward serious conflict.

‘China Is Steering the World Toward War’

In our July 2016 Trumpet issue, Mr. Flurry wrote about the Spratly Islands, where both Scarborough Shoal and the Julian Felipe Reef are located. He mentioned the fact that the Philippines and other nations rightfully claim parts of this chain.

“China is ignoring these nations’ territorial claims,” Mr. Flurry wrote. “China is being aggressive and provocative,” and thereby challenging “seven decades of American naval dominance in the Pacific Rim. This should alarm the world!”

Speaking of the South China Sea, through which a third of the world’s maritime commerce passes each year, Mr. Flurry wrote, “Since Japan’s defeat in World War ii, America has protected this vital trade route and brought peace to this part of the world.” But since the U.S. military is now retreating from the region, “other great powers are coming in to fill the vacuum,” he continued. “China is intimidating the nations of Southeast Asia into submission to its will. It is forcing these countries to do what it wants. Everything is headed in the direction of war.”

Mr. Flurry explained that his assessment of the South China Sea situation is founded on Bible prophecy.

In the book of Deuteronomy, God issues a solemn warning to the people of Israel, explaining that if they do not turn to Him, He will hand control of the world’s strategic sea gates to their enemies. And He warned that these enemy nations would use that control to besiege the nations of Israel: “And he shall besiege thee in all thy gates, until thy high and fenced walls come down, wherein thou trustedst, throughout all thy land …” (Deuteronomy 28:52).

Mr. Flurry explained that this warning is not just for ancient peoples. “It is a prophecy for the modern-day descendants of Israel!” he wrote. “Two nations in particular represent Israel in this end time: America and Britain.” These two countries “are full of terrible sins today, and God is going to correct them for that! This prophecy and several others show that He will send foreign enemies to punish America and Britain!”

But Mr. Flurry made clear that this approaching besiegement and war is lashed together with some astoundingly hope-filled news: “All this prophesied destruction is what it will take for God to reach this world!” he concluded. “After this, people will be ashamed—and they will get to know God! Ezekiel repeatedly talked about that inspiring conclusion (e.g. Ezekiel 6:7; 7:4; 11:10; 12:20; 13:9; 23:48-49; etc). Yes, there is a lot of bad news when you consider what it takes to get people to the point of knowing God. But ultimately, the outcome is spectacularly good news!”