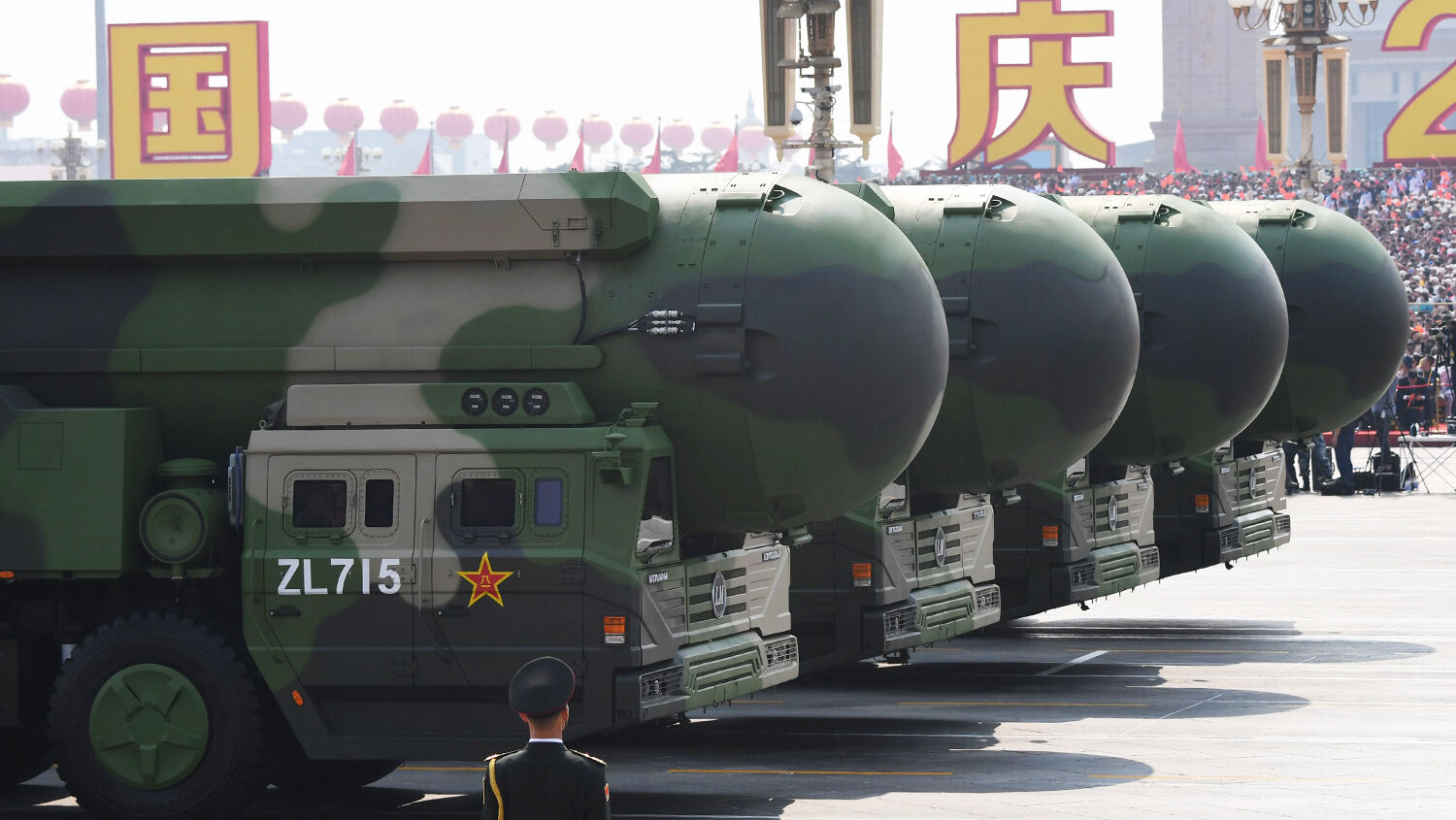 China’s DF-41 nuclear-capable intercontinental ballistic missiles are seen during a military parade at Tiananmen Square in Beijing on Oct. 1, 2019, to mark the 70th anniversary of the founding of the People’s Republic of China.
GREG BAKER/AFP via Getty Images

Beijing is building its military through British universities.

China is not our friend. Actually, China is currently the West’s biggest and most threatening competitor. But it would be hard for Western countries to stop doing business with China altogether, since it has the world’s second-largest economy and largest population. You would think the West would try to keep Beijing at arm’s length though. A recent Telegraph report suggests otherwise. It states that China has been infiltrating British academia to further its military program and, more specifically, to advance its nuclear program.

China does this by recruiting British scientists, many of which continue their work at the United Kingdom’s leading universities. The report implicates 33 universities, including Cambridge University, the University of Edinburgh and Queen Mary University of London. Some even work for the British government. Some conduct research with archer, Britain’s national supercomputer. Others have access to Diamond Light Source, the UK’s national particle accelerator.

Why is this so concerning? Because of their affiliation with the Chinese Academy of Engineering Physics (caep).

The report highlights the case of Gilberto Teobaldi, who, since 2016, has been an “associate member” of the Beijing Computational Science Research Center (csrc), a subsidiary of caep. Working for Liverpool University at the time, he collaborated with csrc scientists to publish at least seven papers. In 2018, the UK government hired him as a “group leader” for a research institute. His work has received $833,430 in British taxpayers’ funding.

It’s still unclear what exactly Dr. Teobaldi and others have collaborated on with caep. But caep has a track record of stealing military secrets. In the 1980s, it obtained information from a worker at America’s Los Alamos National Laboratory. The information allowed Beijing to build a nuclear warhead based off of the W-88, “the United States’ most advanced weapon” at the time. In the 1990s, a caep affiliate procured radar technology information from a Pentagon worker.

Is caep really a company Britain wants its scientists and universities to affiliate with?

Nuclear research with the Chinese government is bad enough. But it’s not the only area where UK research institutions are collaborating with China’s military. The People’s Liberation Army (pla) also collaborates on conventional weapons research. According to the think tank Civitas, the pla links to UK academia are serious and extensive.

For example, Imperial College London has at least four research centers sponsored by Chinese arms suppliers. One of the sponsors is China’s stealth fighter developer. Imperial College London is an esteemed center for aviation studies. Part of the sponsorship includes funding for research on carbon fiber-reinforced plastic, a newly-developed “radar-absorbing stealth material.”

Even more worrying is China’s involvement with Manchester University, which partnered with Beijing’s primary intercontinental ballistic missile developer. Their joint projects include drone research. The Chinese developer was even given a research center funded by the UK government. The same developer is working with the University of Warwick, which collaborates with Chinese arms manufacturer Norinco. Norinco’s customers include, among others, Zimbabwe and Venezuela. Birmingham University even collaborates with Chinese search engine Baidu in collecting online data for behavior prediction research.

It seems like the People’s Liberation Army is Beijing’s only venture not “made in China.”

Britain used to be a superpower in its own right. Its military technological prowess used to be unrivaled. Britain’s era as a superpower is long gone; the country can barely keep itself together. And what is left of Britain’s expertise in research and development is stolen by countries like China. But since China is known for this kind of technological theft, why is Britain letting it happen?

Late educator and theologian Herbert W. Armstrong had a lot to say about Britain’s fall from superpower status to “the sick man of Europe.” In his most-requested book, The United States and Britain in Prophecy, he identified Great Britain as the lost Israelite tribe of Ephraim, to whom God promised world power and prestige (for more information, request your free copy).

Hosea 7:11 calls Ephraim a “silly dove” for trusting in foreign nations. Verses 8-9 state that Ephraim “mixed himself among the people …. Strangers have devoured his strength, and he knoweth it not: yea, gray hairs are here and there upon him, yet he knoweth it not.”

That’s the sad part about this: Many see what China is doing and don’t think it’s any big deal.

We wrote in the cover article of the February 2021 issue of the Trumpet:

Recent reports … expose China’s achievements in … covert operations. They expose how members of the Chinese Communist Party have surreptitiously infiltrated foreign entities, working in academia, major corporations and governments around the world. They reveal Chinese spies seducing high-placed government officials with money and sex. They show American federal representatives using their entrusted power for political, personal and financial benefit. They show election interference and literal election hacking. And all this against the backdrop of a world-changing virus unleashed on the world from China.

That this nation would aggressively target the world’s dominant superpower should not surprise us. But the extent of its success, and the fact that America [and Britain] has not only allowed it but seems unconcerned, is appalling. In fact, viewed in the context of biblical prophecy, it is a potent symbol of nothing less than a historic global shift occurring before our eyes: the end of the Anglo-American era, and the beginning of a short, dark period that will mark the final years of the age of man.

This “short, dark period” is referred to in the Bible as the “great tribulation” (Matthew 24:21-22). It is a period of world chaos so bad that, unless stopped, not a human being would be saved alive (verse 22; Moffatt). Both the fall of Britain and the rise of China are harbingers of its imminence.

To learn why, and what it means for you, request your free copy of The United States and Britain in Prophecy. Also read our article “Wake Up to the Threat From China.”