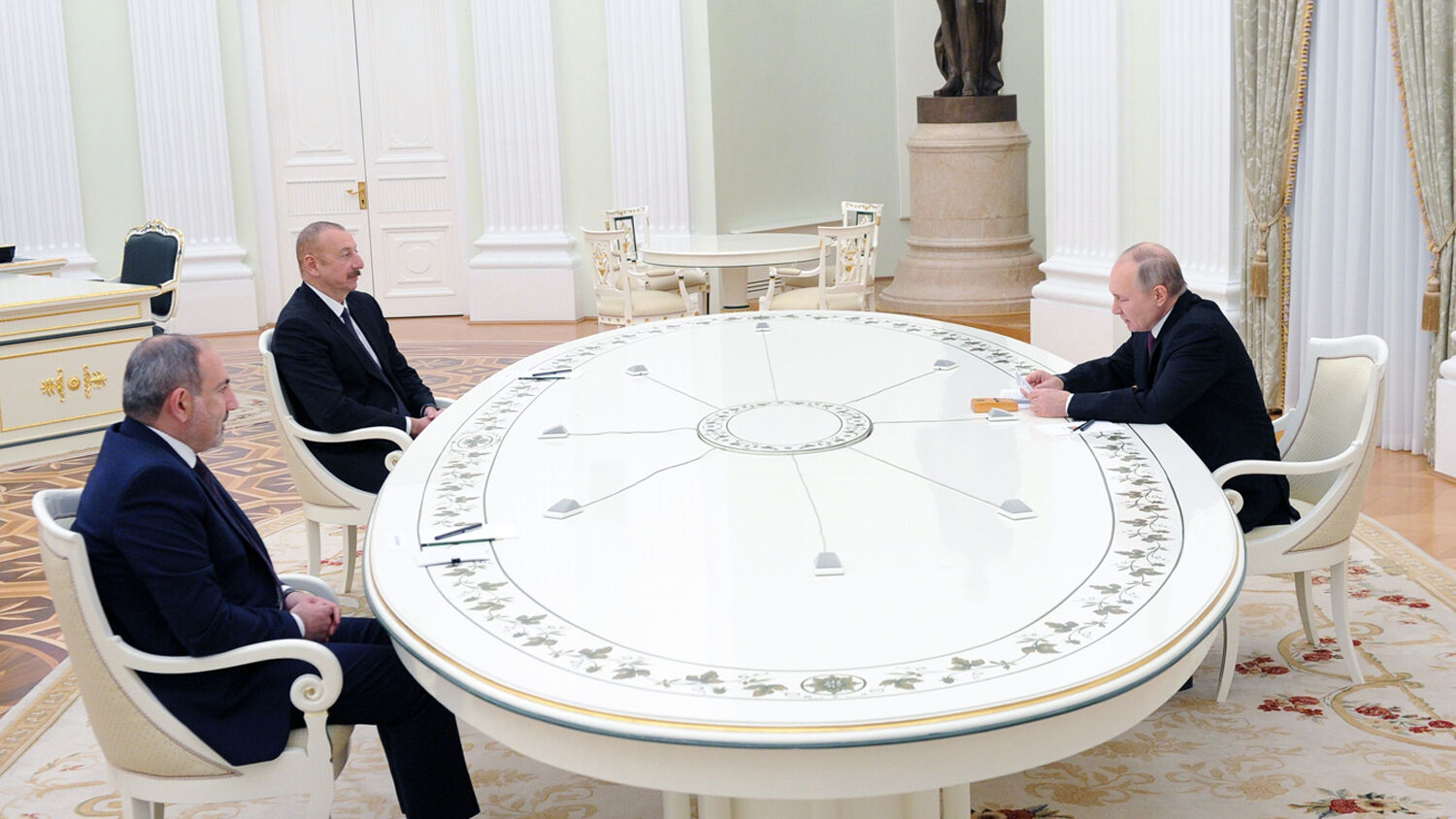 Vladimir Putin is on course to reassert Russia’s historic influence in the war-torn region.

Russian President Vladimir Putin held talks with the presidents of Armenia and Azerbaijan in Moscow on January 11, weeks after he ended a territorial war between the two former Soviet nations. The talks are the latest sign that Putin is using the conflict as an opportunity to reassert Russia’s historic influence in Armenia and Azerbaijan—and to crowd Turkey and the West out.

After decades of escalating tensions, war broke out between Armenia and Azerbaijan on September 27 last year. The fighting over the Nagorno-Karabakh region, which both nations claim, lasted for six weeks. Five thousand people died before Russia brokered a peace deal on November 9. Its terms gave most of the disputed territory to Azerbaijan, while placing 2,000 Russian soldiers in the region as peacekeepers.

Now, Putin’s attention has turned to heading up economic recovery and reconstruction. The recent meeting in Moscow centered around infrastructure projects establishing transport links. These will create direct routes for military shipments from Russia to Armenia via Azerbaijan, re-creating a historic Soviet-era gateway to the West. The three nations agreed to form a working group to produce a viable blueprint by March 1.

Notably, Turkish President Recep Tayyip Erdoğan, who claims a role both “in the field and at the table,” was absent from the meeting. Azerbaijan’s victory was expected to strengthen Turkey’s position in the Caucasus since the two nations are allies. And as co-chairs with Russia in the Minsk Group, France and the United States were also expected to play key roles in the postwar process. But Putin’s resolute action has prevented just that.

The West struggles to compete with the political and economic bonds Armenia and Azerbaijan have with Russia. More significantly, it lacks their shared history as a part of the Soviet Union.

After the Soviet Union collapsed, Russia lost its formerly exclusive influence in the Caucasus. Other nations, such as Turkey, moved in. Azerbaijan’s victory in the Nagorno-Karabakh war was expected to consolidate Turkey’s presence. But Putin has swept in decisively to restore the Soviet-era standing in the Caucasus. He has used this postwar period to station thousands of troops in the region, advance infrastructure and communication projects between Armenia and Azerbaijan, and establish economic ties between the pair. And he is on course to reassert Russia’s historic influence in the area.

The recent developments in Nagorno-Karabakh came as a surprise to many analysts and onlookers. But longtime readers of the Trumpet would expect Russia’s unwavering push for the amalgamation of these former Soviet nations.

In 2008, just after Russia’s invasion of Georgia, Trumpet editor in chief Gerald Flurry said the attack signaled that Russia had entered a “dangerous new era.”

“This was the first military strike of a rising Asian superpower,” he wrote, “and there will be more.” Nearly six years later, he was proved right when Russia annexed Ukraine’s Crimea. And Vladimir Putin was at the heart of it.

Today, Russia has stationed 2,000 troops in the Caucasus, is leading the postwar reconstruction, and is forcefully displacing any other power in its way. In doing so, it has further validated Mr. Flurry’s bold, Bible prophecy-based predictions.

A prophecy in Revelation 9:16 warns of a 200 million-man army to rise in the near future. Revelation 16:12 says this vast army will be under the command of “the kings of the east.” A companion prophecy in Ezekiel 38:2 mentions a “prince of Rosh, Meshech and Tubal” (New King James Version). These ancient names denote modern-day Russia and some of its most important cities. Their “prince” is the overall head of this Asian force.

“I strongly believe Vladimir Putin is going to lead the 200 million-man army,” Mr. Flurry wrote in “Vladimir Putin Is the Prophesied Prince of Russia.” “He is steadily rebuilding the Soviet empire. … This much is absolutely certain: The restoring of Russia’s power by Vladimir Putin—the prince of Russia—was prophesied! … Other nations are leaning toward an alliance with Russia. Several of them are prophesied to join.”

Putin’s actions, entrenching Russia ever deeper in the Caucasus, are bringing both Armenia and Azerbaijan more tightly under Russian control, while muscling out competing powers like Turkey, France and the U.S. He is doing what he can to reverse the fall of the Soviet empire—in accordance with Mr. Flurry’s Scripture-based predictions.

“We need to watch Vladimir Putin closely. He is the ‘prince of Rosh’ that God inspired Ezekiel to write about 2,500 years ago!” Mr. Flurry concluded. “We need to watch what is happening in Russia …. Russia’s resurgence—which we see happening in headlines every day—shows that end-time Bible prophecies are rapidly being fulfilled!”

Putin is determined to deeply entrench Russia in the Caucasus. His willingness to sideline competing powers in the region is a significant indicator of his intentions. His seemingly benign actions in the Caucasus actually indicate a steely determination to restore Russia to its former glory. In doing so, major prophecies are well on the way to being fulfilled. Please request your free copy of Mr. Flurry’s booklet The Prophesied ‘Prince of Russia’ to fully understand these prophecies and what they mean for the world and you.