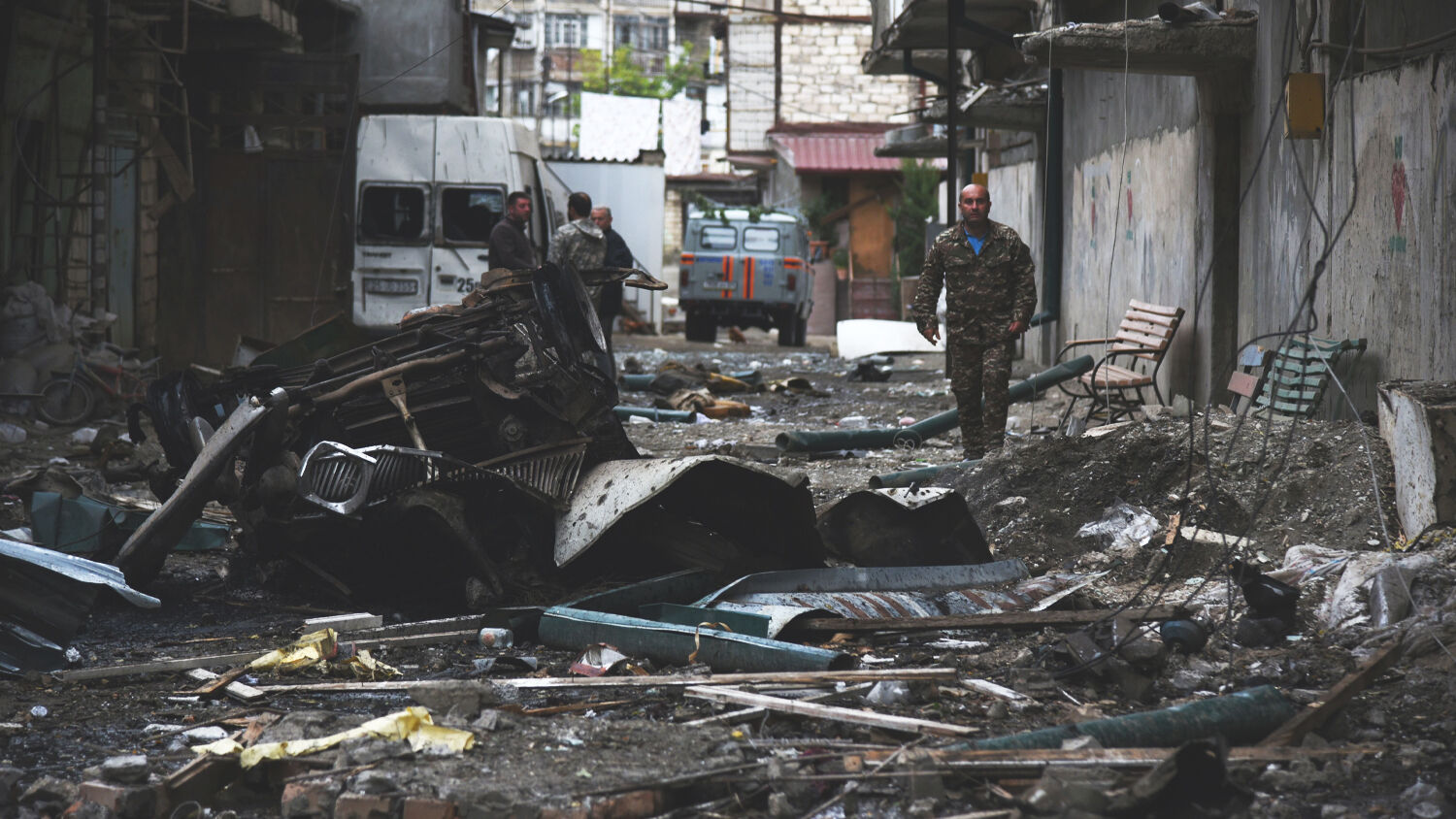 A man walks through the destruction from a recent shelling in the ongoing fighting between Armenia and Azerbaijan over the breakaway Nagorno-Karabakh region, in the disputed region’s main city of Stepanakert, on October 4
DAVIT GHAHRAMANYAN/NKR Infocenter/AFP/Getty Images

The Russian bear is out of hibernation.

Armenia and Azerbaijan signed a Russia-brokered agreement on November 9 to stop the conflict revolving around the region of Nagorno-Karabakh. The deal appears to have brought an end to the fighting, but it is also means a boost to Russia’s power in a critical part of the world.

Nagorno-Karabakh is part of Azerbaijan nominally, but populated by ethnic Armenians. It has been under Armenian control since the 1990s. The agreement follows a steady Azerbaijani offensive where Azerbaijan captured Nagorno-Karabakh’s second-largest town, Shusha (Shushi in Armenian). Under the treaty, Azerbaijan gets to keep Shusha, as well as all other territories Azerbaijani troops have reached.

The agreement is seen as a huge victory for Azerbaijan. The streets of Baku, Azerbaijan’s capital city, were full of jubilant crowds celebrating their country’s military success. Azerbaijani President Ilhan Aliyev tweeted: “This statement is of historical significance. This statement means the surrender of Armenia. This statement ends the occupation that has lasted for many years.”

Armenians, meanwhile, are furious. The day the treaty was signed, protesters broke into the parliament buildings in Yerevan, ripping the nameplate of Prime Minister Nikol Pashinyan off of his office door. Many in the raucous crowd screamed accusations of him being a “traitor.” Pashinyan has so far declined to step down.

The deal allows Armenia to continue holding the areas of Nagorno-Karabakh the Azerbaijani troops hadn’t reached, including the region’s capital, Stepanakert. Nagorno-Karabakh’s Armenian ruler, Arayik Harutyunyan, stated that if the ceasefire wasn’t agreed to, Azerbaijani forces probably would have conquered Stepanakert as well.

Armenia also has to give Azerbaijan a corridor of access to Nakhchivan, an autonomous region of Azerbaijan cut off from the rest of the country by Armenian territory.

The big winner in all of this is Russia, especially when one considers one particular aspect of the deal: the stationing of almost 2,000 Russian soldiers within Nagorno-Karabakh to maintain the peace.

The stated goal of the peacekeepers is to protect the Lachin Corridor, a territorial lifeline between what remains of Armenian Nagorno-Karabakh and Armenia proper.

However, this means that Russia will have boots on the ground among Azerbaijan-controlled territory in an area Azerbaijanis consider to be legally theirs. Russia already has a military base in Armenia and has been providing military support to the Georgian breakaway regions of Abkhazia and South Ossetia. This means that, technically, Russia now has a military presence in all three Caucasian republics.

Russia hasn’t had soldiers stationed in Azerbaijan since the Soviet Union collapsed in 1991; many Azerbaijani politicians see the peacekeeping force as a threat to Azerbaijani sovereignty.

With the agreement reached, Russia also accomplished another one of its foreign-policy goals: chastising a rebellious Armenia.

Armenia, while a Russian military ally on paper, went through a peaceful revolution in 2018 that deposed pro-Russia strongman Serzh Sargsyan and installed Armenia’s current prime minister, Nikol Pashinyan, who is seen as more pro-Western. The ousting of Sargsyan was nicknamed the “velvet revolution,” which happens to be the same name of the revolution that ousted the pro-Soviet Communist government in Czechoslovakia. Russian President Vladimir Putin probably noticed that.

If the ceasefire hadn’t been implemented, Armenia probably would have lost a lot more territory to Azerbaijan. Putin, with the latest ceasefire, demonstrated to Pashinyan that Armenia’s security cannot be guaranteed without Russia’s support. This might force Pashinyan to toe a more pro-Russia line. Now that many are calling for Pashinyan’s resignation, the crisis on the streets of Yerevan might also bring in a different leader that Putin would have an easier time controlling.

Finally, this would also have been a way for Russia to assert its dominance in the former Soviet Union (to which both Armenia and Azerbaijan belonged to) while sidelining the West.

Previous peace agreements have been attempted—but failed to get off the ground—through the involvement of the Minsk Group, a three-nation organization comprised of Russia, France and the United States. Moscow orchestrating this agreement independently of Washington and Paris was Putin demonstrating that the West had no business in trying to organize deals between the former Soviet republics. This is especially embarrassing for America, as U.S. Secretary of State Mike Pompeo held talks with both the Armenian and Azerbaijani governments last month that bore little fruit.

The deal not only sidelines America but also the European Union. Aside from France—whose involvement in the conflict is limited—no other major European power has done much to put an end to the conflict. While Europe was in an uproar when Russia annexed Ukraine’s Crimean Peninsula, barely a peep was heard this time from Brussels or Berlin.

This may show Putin that he can redraw borders and fly in Russian troops without expecting a strong response from Europe. This is especially worrisome for Ukraine, where there are worries that Putin will deploy “peacekeepers” to stop the fighting between the Ukrainian government and the Russia-backed separatists in the east of the country.

Russia already maintains a military presence in Transnistria, a rebel region of the former Soviet republic of Moldova; the troops were supposed to be a temporary measure in the chaos of the ussr’s collapse in the 1990s, but they never left.

In short, the agreement stopping the fighting between Armenia and Azerbaijan is a diplomatic coup for Vladimir Putin.

Now that he has tested the waters, what geopolitical escapade can we expect him to undertake next?

Trumpet editor in chief Gerald Flurry has prophesied that Vladimir Putin fulfills a prophecy recorded in Ezekiel 38. Here is how the beginning of that prophecy reads: “And the word of the Lord came unto me, saying, Son of man, set thy face against Gog, the land of Magog, the chief prince of Meshech and Tubal, and prophecy against him” (verses 1-2).

Mr. Flurry comments on these verses in his free booklet The Prophesied ‘Prince of Russia’:

Scholars generally agree that “Gog” is Russia, and that “the land of Magog” includes China. The descendants of Meshech and Tubal have been found together throughout history. In Assyrian and Greek histories, Meshech appears as Musku, Muski or Mushki—all names related to the Russian spelling of Moscow, as you can read in the International Standard Bible Encyclopedia. What about Tubal? On the eastern side of the Ural Mountains lies the city of Tobolsk, named after the Tobol River, a name derived from Tubal. Tobolsk was once the seat of Russian government over Siberia and was basically considered Russia’s Asian capital.

There is also a name for all of the Russian people in Ezekiel 38:2. There is controversy over how the Hebrew word rosh should be translated in this verse. The King James Version uses the adjective “chief.” But the correct rendering (used by the Moffatt, New King James and others) uses the word not as an adjective, but as a proper noun: Rosh. Thus, that verse should read, “the prince of Rosh, Meshech and Tubal.”

Rosh was the ancient name of Russia, once called Rus. Many encyclopedias and commentaries (such as the Jamieson, Fausset and Brown Commentary) recognize this. So who is this “prince” of Russia, Moscow and Tobolsk? The use of all three names shows that this is an individual ruler of all the peoples of Russia, from the west to the east. The reference to the cities of Moscow and Tobolsk helps us see how vast Russian territory is in these latter days. …

Mr. Flurry wrote this booklet after Russia had invaded the former Soviet states of Georgia in 2008 and Ukraine in 2014. We just saw Russia deploy troops in territory controlled by Armenia and claimed by Azerbaijan. Vladimir Putin increasingly becoming involved in more of the former Soviet world further proves what Mr. Flurry prophesied.

Keep watching Russia. You can expect Vladimir Putin to involve himself more and more everywhere from Eastern Europe to the Asian heartland. All of this is building to a Russia-led world superpower that will shock the world. To learn why, where Vladimir Putin personally figures into this, and what this means for your life today, please request our free booklet The Prophesied ‘Prince of Russia.’