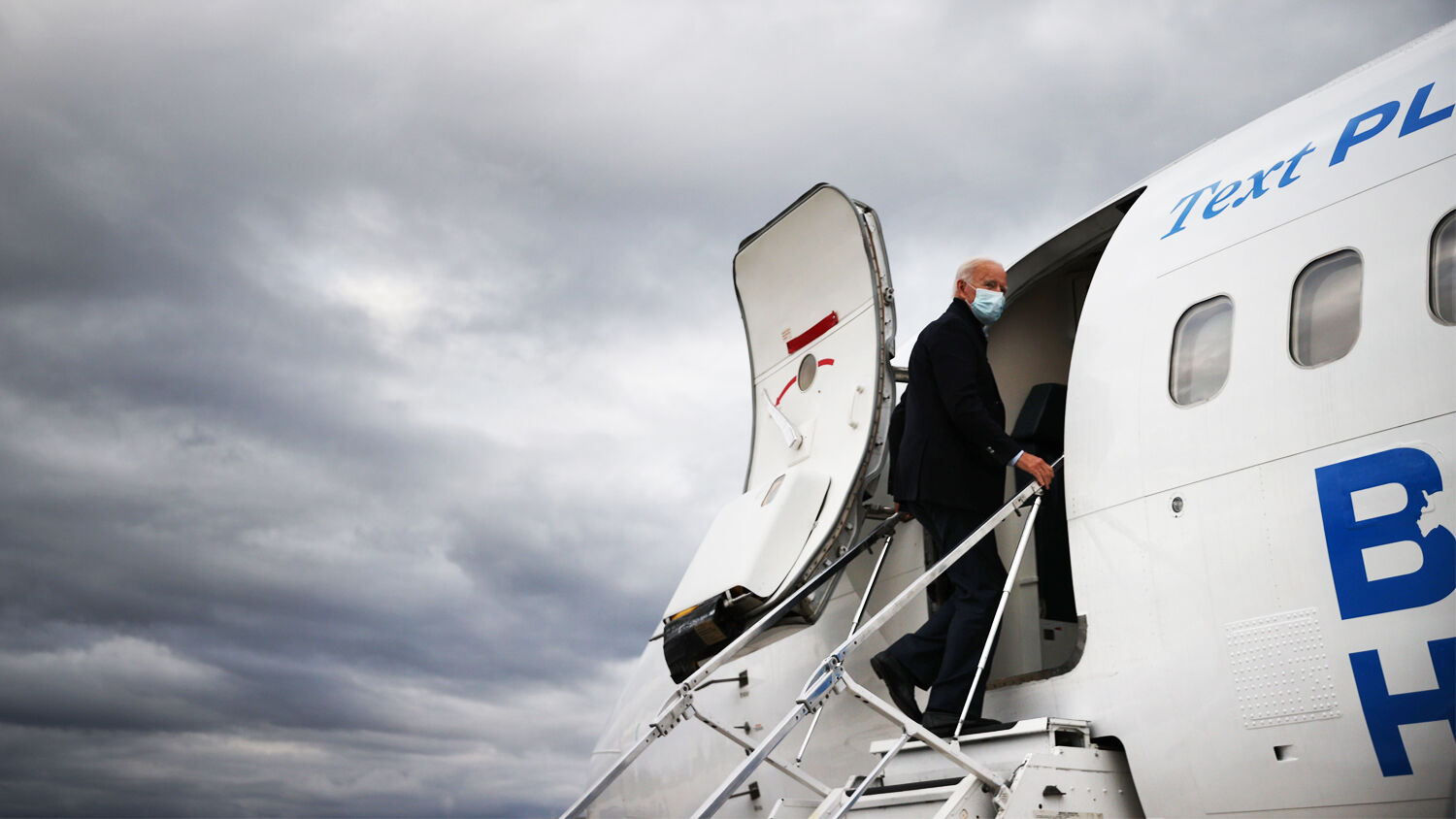 By all appearances, the radical left in America is on the cusp of complete victory. There is a legitimate fear that, with its grip on the presidency, the House and Senate, it will have unchecked power to transform America into an utterly different country.

This is why biblical prophecy is such an invaluable source of hope.

Prophecy shows several events that will happen in America’s immediate future that would effectively become impossible under a Biden administration. Read this landmark article from our editor in chief to learn more.

If you are skeptical about the reliability of biblical prophecy, there is plenty of proof to assuage your doubts. The Trumpet has a proven track record of accurate Bible-based forecasting. We have published many booklets and articles on this subject that prove the Bible’s prophecies are real, they are sure, and you can trust them.

To give you an example, look at some forecasts our editor in chief, Gerald Flurry, made 14 years ago about the danger America faces today. The freshness and relevance of this warning are stark.

He wrote these words right after the 2006 midterm elections, in which Democrats swept into control of Congress. This dramatic victory foreshadowed what appears to be happening today, and Mr. Flurry sounded a clarion alarm.

“I believe the 2006 midterm elections changed American politics forever,” he wrote. “You don’t need deep biblical understanding to realize that something is dreadfully wrong in this country. America is being cursed!”

The external threats to America demanded robust leadership, and Mr. Flurry warned that these new leaders were simply too pacifist to defend against them. “The election of the Democrats, I believe, reveals the desperate lack of will in our people …. This election sent a message to terrorists just as surely as Chamberlain sent a message to Hitler when he traveled to Munich before World War ii and accepted a paper promise of ‘peace for our time.’”

Think about the message America is sending the world right now. Evidence of election fraud is devastating, yet virtually the entire press and political establishment accept it; even those who oppose it have rolled over and stopped fighting. The nation looks ready to rush back to the radical politics of Barack Obama and far worse.

“Now extreme liberals dominate our government,” Mr. Flurry wrote 14 years ago. “Time will prove this to be a deadly curse on the United States!”

Mr. Flurry was right. It has been a deadly curse. Yet these words are many times more relevant than when he wrote them. God is giving America a good, hard look at just what this nation would become if this radical force truly got its hands on all the levers of power.

And unless God intervenes, that is exactly what will happen! We must face this reality squarely.

Just how great of a curse on America would that be? Think of the arbitrary, autocratic measures our leaders enacted overnight to confront coronavirus. Think of the barefaced hostility to freedom of religion, freedom of assembly, and the right to bear arms. Look at the clampdowns on free speech that Big Tech companies have summarily imposed. Think of the leaders calling for Americans who demonstrated in Washington last week to be treated like terrorists—then think of how these very leaders applauded race riots this past summer and told law enforcement to stand down as cities burned. Think of open borders and more immigration, destructive economic policies aimed at combatting climate change, enforced radical gender and transgender policies, partial birth abortion, and so many other radical positions promoted by the left.

Think of the changes in America’s foreign policy with a man named Biden in the Oval Office. Think of his policy toward an ascendant and belligerent China. Think of how he would deal with an Iran that is nearing nuclear breakout. As Mr. Flurry wrote in his 2007 article, Ayatollah Ali Khamenei called the Democratic sweep in 2006 a “victory for Iran.” 2021 is a triumph: Iran is already exploiting the prospect of a Biden administration as an opportunity to go nuclear.

It was 14 years ago that Nancy Pelosi first came to power. “Democrats are excited by the fact that endorsements of ‘San Francisco values’ now echo through Washington’s halls,” Mr. Flurry wrote. Now Speaker Pelosi’s House is working to officially eliminate all language acknowledging differences between male and female, and they’re just getting started.

“God is cursing America for its rank vileness by taking away quality leadership,” Mr. Flurry continued. “The leaders sweeping into power today are the opposite of the God-fearing leaders that made this nation great. Their widely touted vile values and beliefs are blatantly anti-God.” Then, after quoting Isaiah 1:4, he wrote, “America is laden, or worn down, with sin! This has provoked God to anger!”

The view of America afforded by biblical prophecy is crucial to understand. It explains the curses God is sending, and it shows why He is sending them and what to do in response.

One of those curses is revealed in Leviticus 26:19: God breaking the pride of our national power. About this, Mr. Flurry wrote, “When the American people handed antiwar Democrats control of Congress, they revealed their unwillingness to stand in the face of adversity. They exposed a massive deficit of willpower and determination!”

As clear as that deficit was 14 years ago, it has been exposed on an unprecedented scale by events this past week. Though Democrats have long surrendered to the nation’s enemies, now virtually the entire Republican political class has proven itself utterly unwilling to stand for principle and truth. Our broken will is shattered. We are witnessing a phenomenal surrender to terrifying evil.

God is allowing this drama to play out to a stunning extent. The reason is growing clearer almost by the hour. Nothing exposes the truth like a crisis. Moment by moment, more truth, more reality, is being exposed. The left is showing its totalitarian colors. Many who had aligned themselves with President Trump are turning against him with venom. Everyone’s colors are pinned to the mast—in a way they would not have been under any other circumstances.

The more this plays out, the clearer it is just how far gone this nation truly is.

Anyone who thought these prophetically based warnings from Mr. Flurry were hyperbole 14 years ago needs to look at where America is today.

Only one thing prevented all that he foretold from already fully playing out—and that is that, just as prophecy said, God saved Israel temporarily by the hand of a modern-day Jeroboam.

After the election four years ago, Mr. Flurry said that had Hillary Clinton won, it would have meant the end of our constitutional republic. If you thought that was exaggeration, look around.

The sanctimony and self-righteousness of leftists, suddenly so passionately concerned about the rule of law and the nation’s founding institutions, so eager to brand anyone who protests as a terrorist, is extremely hard to stomach. It brings fresh relevance to the words of many biblical psalms, written amid grievous trial, imploring God to intervene. Here is one: “Lift up thyself, thou judge of the earth: render a reward to the proud. Lord, how long shall the wicked, how long shall the wicked triumph? How long shall they utter and speak hard things? and all the workers of iniquity boast themselves?” (Psalm 94:2-4).

How long will this go on? God is allowing it to continue to the point that it is absolutely clear: Nobody is going to save America—not Bill Barr, not Amy Coney Barrett, not Ted Cruz, not Rudy Giuliani, not Sidney Powell, not even Donald Trump.

The only one who can turn this around is God.

We are deep in miracle territory.

Bible prophecy is sure. And this continues to inform the Trumpet’s view. The reason God has held off the worst of the curses to befall America is that a few more events must first occur that have not yet happened. This is why—in the face of all evidence to the contrary—we remain confident that God will yet intervene.

By all appearances, things in America have never looked darker. But a great deal of history, and of prophecy, shows that it is when things look darkest that God delivers His greatest miracles.