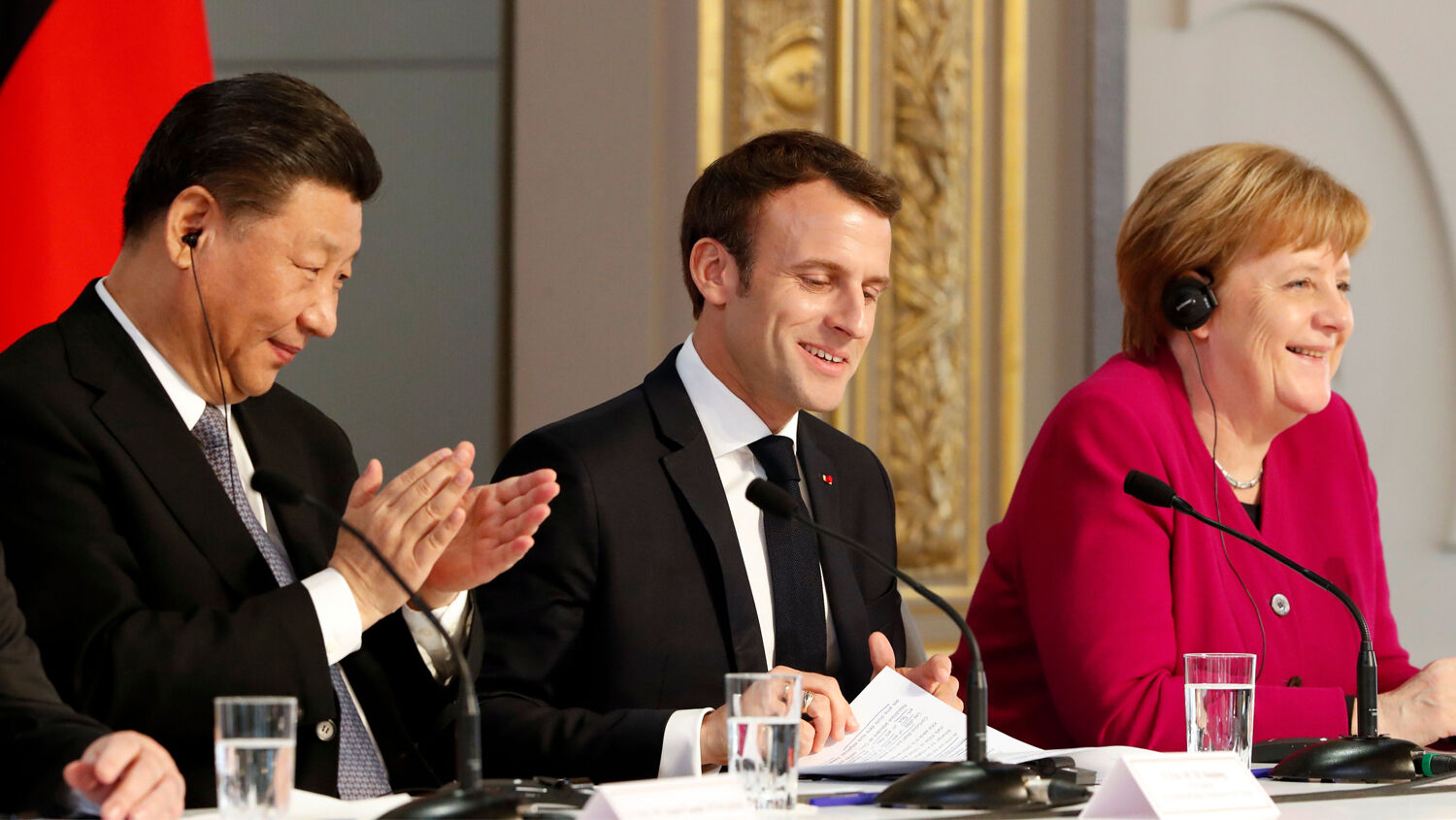 A year ago, in mid-December 2019, Chinese Foreign Minister Wang Yi said China was not planning to sign an investment deal with Europe that had been in the works since 2013. China was a “developing economy,” he said, and it shouldn’t be made to abide by the same standards as more advanced European economies. It looked like the deal was dead. But on Dec. 30, 2020, Chinese President Xi Jinping conducted a video conference with German Chancellor Angela Merkel, French President Emmanuel Macron and other EU leaders. After the conference, they released a bombshell announcement: “The EU and China concluded in principle the negotiations for a Comprehensive Agreement on Investment.”

Why the change in heart by the Chinese? Why, after stalling for seven years, did Chairman Xi make a rare personal intervention to seal this mammoth deal?

Why did the Europeans, who present themselves as champions of human rights and fair labor, agree to more deeply intertwine their economy with that of the shamelessly brutal Chinese Communist Party?

And what does this mean for the United States’ efforts to pressure China into accepting a rules-based international economic model?

These are vital questions with answers that have implications for each of us.

The deal’s main accomplishment is that it makes it easier for European companies to operate in China. It is also billed as doing the reverse—facilitating operations of Chinese firms in Europe—but in reality Europe has behaved far more fairly than China toward multinationals. So the Comprehensive Agreement on Investment was mainly about China assenting to correct that imbalance and give EU companies a more equal footing.

For decades, if a European firm wished to operate in China, it would have to set up a joint venture with a Chinese company and in the process, share intellectual property and sensitive technology. This was an appalling requirement. But if EU companies wanted access to China’s lucrative markets, they had no choice but to comply. Now the Chinese have agreed to end this requirement for EU companies in certain key industries including vehicles, computing services and health.

China also agreed to take the mask off its notoriously secretive government subsidies, and open China up to the EU’s various banks.

These are massive concessions from China. They would level the playing field to an unprecedented degree. The European Commission issued a statement calling the deal “the most ambitious outcome that China has ever agreed with a third country or economy.”

So why did China’s leadership agree to these unprecedented terms?

One of the main reasons this deal took so long to formalize was because China was stalling. The Chinese had become very used to breaking all the rules they could to give themselves trade advantages, so they stalled, understandably unwilling to offer the concessions to Europe that this deal requires.

But over the last year, China came under heavy criticism by several nations including the United States, the United Kingdom and Australia. These nations are sounding the alarm over China’s unlawful trade practices, deceitfulness with the coronavirus, atrocious human rights record in Xinjiang, illegal crackdown on Hong Kong, bullying of Taiwan, predatory loans to poor nations, and more.

The English-speaking nations have sought to convince more countries to work with them to pressure China into adopting a liberal, rules-based international economic standard. And for a time, it seemed to be working. Just a month ago, the European Union called for a U.S.-EU dialogue to discuss “the strategic challenge presented by China’s growing international assertiveness.”

So the Chinese feared that the ire of the U.S. could pull Europe in and leave China isolated from the West. It was that fear that prompted the Chinese to agree—albeit hollowly—to the concessions they made to Europe. And it was that same fear that spurred Xi Jinping to personally intervene to help clinch the Comprehensive Agreement on Investment.

Also relevant is that Chairman Xi expects Joe Biden to become president of the U.S. later this month. Xi believes Biden will reverse course on many measures the Trump administration has taken against Europe. For example, just last week, the Trump administration stepped up its trade dispute with Europe over aircraft subsidies and increased tariffs on Europe’s aircraft parts and wine. Xi reckons that a Biden presidency would end such measures and work to strengthen trans-Atlantic ties. So he moved quickly on the Comprehensive Agreement on Investment—clinching it before Biden could assume office and begin coaxing Europe back toward America.

My take on the EU-China investment agreement for ⁦@laurnorman⁩ @wsj https://t.co/WAiTQez48z

So China’s motivations are clear. But the question about Europe remains.

The leaders and peoples of Europe often portray themselves as champions of human rights and international labor standards. And they know very well that the Chinese economy is run partly on slave labor. In the Xinjiang region, China has over a million members of the Muslim Uyghur minority detained in concentration camps, and many are bused around to various parts of Xinjinag and elsewhere in China to provide what often amounts to slave labor.

The Trumpet spoke on December 21 with Salih Hudayar, the prime minister-in-exile of this region, which he and other Uyghurs call East Turkistan. He said: “[M]any of the goods that are made in China, especially like clothes, even the iPhones that we use, certain components are made with the forced labor of the Uyghurs and other peoples.”

This chilling statement is confirmed by research from the Australian Strategic Policy Institute. Using satellite imagery and on-the-ground reporting, it estimates that from 2017 to 2019 alone, some 80,000 Uyghur slave laborers were shipped “directly from detention camps” to other locations in China.

Merkel, Macron and other Europeans would be well aware of these facts. And they have also seen China’s unlawful crackdown on Hong Kong, illegal bullying in the Taiwan Strait and the South China Sea, repression of its general population, and even its “wolf warrior” diplomacy right there in Europe.

But still the Europeans sealed this deal that tacitly signs off on China’s abuses of its people and myriad other crimes. It is true that the EU expressed “concerns” about China’s behavior. But such statements ring just as hollow as China’s promises to consider possibly changing some of its practices.

The truth is that by signing this deal, European leaders have shown that they care less about how many Uyghurs are detained, tortured, raped, sterilized and killed than they do about better tapping into the Chinese markets—and reducing economic dependence on America.

To see Europe compromise so shamefully by making this deal with China may seem surprising. But this is actually the kind of development we should expect to see more and more in the months and years ahead—if we understand Bible prophecy.

Around 2,700 years ago, the Prophet Isaiah discussed an immensely powerful, multinational trade alliance that would develop in the modern age. And he listed who the main players in this bloc would be.

Isaiah 23:1 names one of them as “Chittim.” In his booklet Isaiah’s End-Time Vision, Trumpet editor in chief Gerald Flurry writes, “Kittim is synonymous with the Chittim of Isaiah’s prophecy …. After their migration through Central Asia, the Kittim made their appearance in modern-day northeastern China and Mongolia.” So this name indicates modern China.

Isaiah’s prophecy goes on to say that “Tyre” will also be a major player in this trade bloc. Mr. Flurry explains what this name signifies: “The spiritual center of the [modern European] Holy Roman Empire is called Babylon in your Bible (Revelation 17:5; 18:1-3). But here in Isaiah, the Bible refers to Tyre (and its allies Zidon, etc) as the commercial center of this European power.”

The scriptures show that Russia and Japan will also join this globe-girdling economic bloc. Together these countries will come to control worldwide trade for a brief time, and the prophecies show that they will use that control to strangle America and some of its allies.

In light of these prophecies, we should not be surprised to see Europe willing to ignore China’s terrible human rights abuses and illegal trade practices. We should actually expect the ties now strengthening between the EU and China to only grow more robust. And even as China grows more powerful, aggressive and malicious, we should expect Europe to increasingly side with Beijing—and against America.

The Scriptures make clear that this trend will culminate in a time of intense catastrophe and darkness. But the story will not end there.

The Scriptures show that the darkness will be short-lived and it will be overcome by light. Then a fundamentally different chapter of history will begin—far brighter than any mankind has ever experienced.

The Creator of mankind will come back to Earth and bring a decisive end to man’s rebellion, self-destruction, human rights abuses, oppression, greed and other evils. He will bring in an epoch of peace and light for the peoples of Europe, China, East Turkistan and all the world. “Thank God,” Mr. Flurry writes, “there is great news beyond the bad news.”