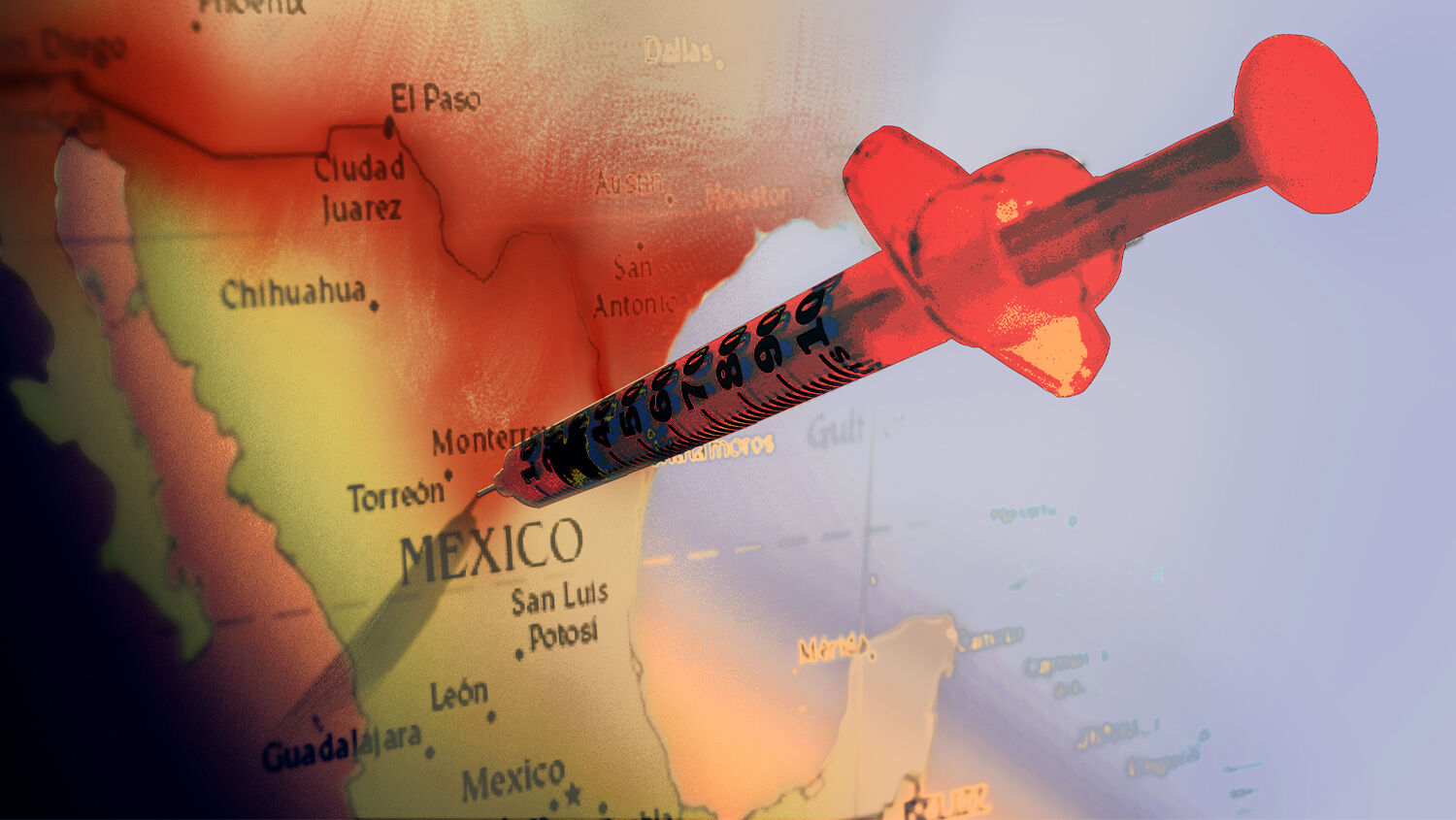 Synthetic opioids like fentanyl are America’s deadliest drugs. Twice as many people die from synthetic opioid overdose as die from being shot by a murderer. Yet until recently, law enforcement could not trace it to its source. A new report from the security firm Fortress Risk Management, however, shows it is being smuggled across the Pacific Ocean by Chinese drug traffickers. The Chinese Los Zheng cartel operates through a network of Mexican pharmacies, veterinary clinics, clothing stores and computer shops. And it is Mexico’s largest fentanyl cartel.

According to Fortress, manufacturers in Wuhan, China, ship chemicals across the Pacific Ocean to Mexican ports in Manzanillo, Ensenada and Lázaro Cárdenas. The chemicals are then transported to clandestine laboratories in and around Mexico City. The Los Zheng cartel synthesizes them into fentanyl and methamphetamines for shipment to drug dealers in the United States.

Overdose deaths in the U.S. involving fentanyl and other synthetic opioids mushroomed from about 3,000 in 2013 to more than 30,000 in 2018. The U.S. government is attempting to shut down the Los Zheng cartel and has urged the Chinese government to shutter the chemical laboratories, but the cartel continues to dominate Mexico’s synthetic opioid market.

One reason for Los Zheng’s success is that U.S. demand for fentanyl is high. But another likely reason is that the politburo of the Chinese Communist Party (ccp) wants Americans addicted to drugs.

Officially, the U.S. government says the Chinese government is not complicit in drug trafficking. But retired Drug Enforcement Agency officer Derek Maltz told Fox News this is not true.

“As part of the ccp’s unrestricted warfare model, they have progressed significantly against America with their enhanced role in the drug business,” Maltz noted. “They can make multibillions and, at the same time, undermine the security of America. A kilogram of fentanyl can kill 500,000 people, so the administration should look at the death rates and treat this as a serious national security threat as opposed to only a public health crisis.”

Most people realize China is one of the nations most opposed to the U.S. Many understand that the most effective way to destroy an enemy nation is by weakening it from within. Yet few have considered whether China is now doing this through American drug users. The Chinese Communist regime wants America to fall. It does not want to engage a superpower in open warfare. So why not facilitate the flow of illicit drugs that kill thousands of people, destroy families, increase crime, drain policing resources and create anarchy? Evidence shows China is using just such a strategy!

Chinese leaders understand the devastating effect opioids can have. The Opium Wars of the 1800s involved thousands of tons of opium pouring into China, which addicted millions of Chinese, devastated their economy, and contributed to their military loss against the British Empire.

In 1927, China erupted in a civil war between the Nationalist Party and the insurgent Communist Party. Communist leader Mao Zedong instructed his subordinates to grow poppies and convert them to opium, then traffic it into China’s non-Communist regions. As drugs became more available in those regions, people more readily used them. Opium weakened drug users, their societies, their governments and their militaries. The Communists then conquered the area. Once in power, they took draconian measures to stamp out drug use, executing suspected traffickers.

The Communists conquered mainland China in 1949. Mao then nationalized opium production and started supplying narcotics to people in other countries that opposed him, primarily Japan and the United States. During the 1950s and 1960s, Chinese Premier Zhou Enlai managed his nation’s narcotics operations. He allegedly told Egyptian President Gamal Abdel Nasser in 1955 that the Communists would use drugs to destroy morale among U.S. troops in Asia (Edward R. Slack, Opium, State and Society). In 1964, Soviet statesman Mikhail Suslov summarized Zhou’s strategy this way: “[D]isarm the capitalists with the things they like to taste.”

There is little evidence that any premier since Zhou has actively managed China’s drug trade. But the nation still incorporates “drug warfare” in its military strategy.

Enemies at the Border

Drug use is a strategic vulnerability for America. Adversaries can attack the U.S. without starting a world war by feeding its drug users. “[E]ven if every country in South America were run by anti-American governments, it would not overly concern Washington; these states, alone or en masse, lack the ability to threaten American interests,” Geopolitical analyst Peter Zeihan wrote in 2008. He then clarified: “… in all ways but one. The drug trade undermines American society from within, generating massive costs for social stability, law enforcement, the health system and trade.”

Addiction psychiatry specialist Dr. Indra Cidambi says these “massive costs” to social stability, law enforcement and health care equal about 5 percent of America’s gross domestic product. That is over $1 trillion per year—about $3,000 for every man, woman and child in America.

The strategic threat of drug use extends far beyond economic losses. Empowering cartels to the point that the Mexican government becomes even less stable—or falls—threatens the territorial integrity of the United States itself. “In many regards, Mexico as a failed state would be a worse result for Washington than a hostile united Mexico,” Zeihan continued. “A hostile Mexico could be intimidated, sanctioned or even invaded, effectively browbeaten into submission. But a failed Mexico would not restrict the drug trade at all. The border would be chaos, and the implications of that go well beyond drugs. One of the United States’ largest trading partners could well devolve into a seething anarchy that could not help but leak into the U.S. proper.”

By allowing the Los Zheng cartel to operate in Wuhan and Shanghai, the Chinese government is destabilizing Mexico, and using Mexico’s population of 130 million people as pawns to destabilize America. If America itself were to collapse into “a seething anarchy,” its foreign enemies would have a once-in-a-lifetime opportunity to seize control of Cuba, Panama and other vital maritime trade choke points. Since about half of America’s seaborne trade passes within 100 miles of Cuba, a nightmare scenario would be having a foreign power cripple its economy by cutting off its Caribbean trade routes while it is engaged in a civil war!

The late Herbert W. Armstrong explained in his landmark book The United States and Britain in Prophecy that the Anglo-Saxon peoples of Britain and the U.S. originally descended from the ancient Israelites. This astonishing truth means that the Bible’s prophecies about Israel in the “time of the end” are directed at the British and the Americans.

In one prophecy, God likens the U.S. to a hedged vineyard. The United States is blessed with a hedge to the north and south by two nonthreatening nations and to the east and west by the two largest oceans on Earth. But because the people did not acknowledge that these blessings are from God and instead indulge in rampant sin, including drug use, God warns that He will tear down this hedge. Isaiah 5:5 records Him as saying: “I will tell you what I will do to my vineyard: I will take away the hedge thereof, and it shall be eaten up; and break down the wall thereof, and it shall be trodden down.”

God warns that foreign enemies will besiege the weakened United States: “The Lord shall bring a nation against thee from far, from the end of the earth, as swift as the eagle flieth; a nation whose tongue thou shalt not understand; A nation of fierce countenance, which shall not regard the person of the old, nor shew favour to the young: And he shall eat the fruit of thy cattle, and the fruit of thy land, until thou be destroyed: which also shall not leave thee either corn, wine, or oil, or the increase of thy kine, or flocks of thy sheep, until he have destroyed thee. And he shall besiege thee in all thy gates, until thy high and fenced walls come down, wherein thou trustedst, throughout all thy land: and he shall besiege thee in all thy gates throughout all thy land, which the Lord thy God hath given thee” (Deuteronomy 28:49-52).

The Trumpet’s parent magazine, the Plain Truth, stated in 1979 that the first breach in America’s protective hedge occurred in 1959, when Communist revolutionaries overran Cuba.

Today, China is destabilizing Mexico and further uprooting the hedge that protects the U.S. southern border. This subversive activity will ultimately lead to the fulfillment of Deuteronomy 28. Once America becomes too divided, destroyed and drugged to strike its enemies, those enemies will tear down its walls, seize control of its trade routes, and put it under a massive economic siege!

Like the victims of the Opium Wars and the weaponized drug trade, Americans are willingly ingesting a dose that is fatal to individuals and to the nation: “the things they like to taste.”

Isaiah’s End-Time Vision
Isaiah had a prophecy for the end time that was twofold. He delivered his message to the temple priests and to the people of Israel. Did you know that most of Isaiah’s temple prophecies are also addressed to God’s own Laodicean Church in the end time? The Laodiceans’ rebellion revolves around God’s government. They don’t want God to rule them.

Isaiah has a powerful vision for the Laodiceans, the nations of Israel—and even the whole world. You won’t find a more inspiring, far-reaching vision in all the Bible. It pictures a beautiful and peaceful Earth. The vision reaches out into the universe. This prophet also reveals how Satan successfully destroys that vision for many of God’s own people. Those who overcome Satan’s deception will be the most honored people ever on this Earth. They will become the Bride of Christ!
From The February 2021 Philadelphia Trumpet
View Issue FREE Subscription
Next
Previous