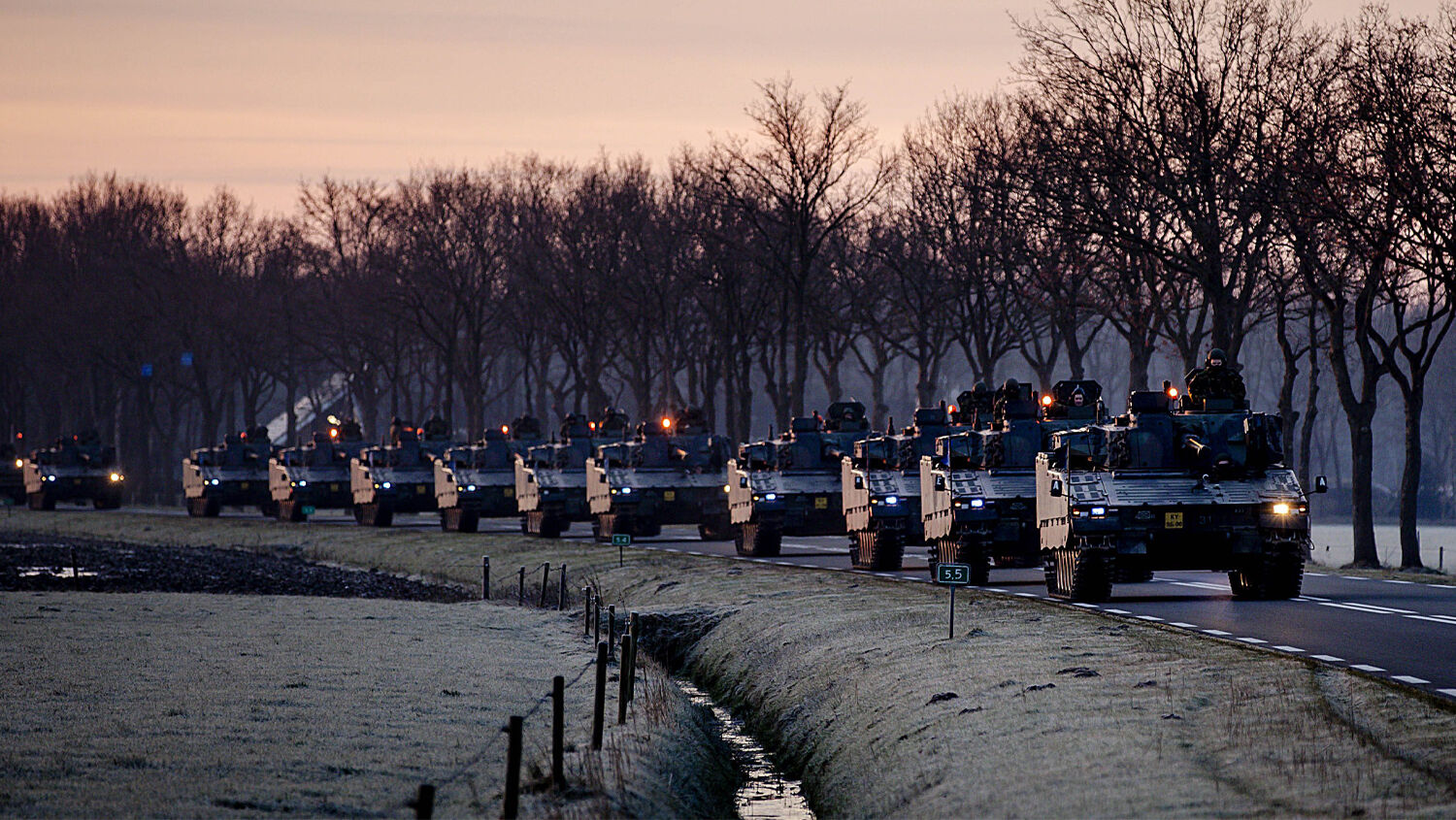 Army tank vehicles line up at the Johannes Postkazerne military base to drive to Steenwijk train station to be transported to Germany for the NATO quick reaction force, in Steenwijk, The Netherlands, on February 8, 2018.
ROBIN VAN LONKHUIJSEN/AFP via Getty Images

The global crises are forging Europe into a military world power.

Sweden, while not a nato member (though this may change soon), is one of them. Stockholm announced in October that it would increase its defense spending by 40 percent in five years. The Swedish government also plans to double its number of conscripts.

These new developments are the result of Russian provocation. Sweden is a ferry ride away from Russia, and Moscow keeps poking at the Swedish border. Two Russian warships entered Swedish waters without permission in November, and the Russian Air Force regularly enters Swedish air space. Russia doesn’t have the best track record for respecting its neighbors’ territorial integrity. Because of this, Stockholm is urgent to arm itself.

Swedish Defense Minister Peter Hutqvist said this was “the largest investment [in defense] since the 1950s,” all in response to the “new security environment” caused by an aggressive Russia.

The Riksdag (Swedish parliament) also voted to adopt a “nato option.” This doesn’t mean that Sweden is applying for membership. Rather, it is formally expressing interest in potentially joining the alliance in the future. Finland did the same in 1995 and still hasn’t joined the bloc. But it demonstrates how nervous Sweden is becoming.

But this trend of militarization isn’t limited to Greece and Sweden. Countries all over Europe are boosting their defense spending. Poland’s defense budget this year was 11 percent higher than 2019’s. 2020 also saw Italy’s fourth year in a row of defense spending increases. Rome has announced the intent to purchase four submarines among other military technology. Germany, in September, voted to increase its 2021 defense budget.

Yet despite all of these increases in defense spending, European support for nato is shrinking. According to a Pew Research poll from February, a majority of Greeks and Turks see nato in a negative light. The poll also suggested that more people in Hungary and Bulgaria saw nato negatively than positively. Before nato membership, Hungary and Bulgaria were under Communist dictatorships. You would think they would be more appreciative of the organization formed to combat the spread of communism.

A later Pew Research poll suggests that only 50 percent of Frenchmen and 51 percent of Spaniards have a positive view of nato. Before nato, Spain had Franco’s fascist regime. Shouldn’t Spaniards appreciate America, the power that freed most of Western Europe from fascism, sticking around through nato? Shouldn’t France be more appreciative of American soldiers staying in Europe to make sure Moscow didn’t do to Paris what it did to Berlin? Stalin himself wanted the Red Army to push that far west.

Some European countries are increasing their defense spending, but not because of obligations to nato. They’re doing it because they want to stand on their own two feet—without America.

Europeans are seeing the global chaos and are terrified. They see Russian President Vladimir Putin arbitrarily redrawing the borders of Eastern Europe. They see Turkish President Recep Tayyip Erdoğan invading Syria and provoking Greece. They hear U.S. President Donald Trump saying he’s tired of America policing the world. They see the radical Islamist regime in Iran rushing to develop nuclear weapons with nobody stopping it. They see the masses of Syrian and North African refugees overwhelming their borders. They see jihadists sneaking in with those refugees to cause mayhem on the streets of Nice and Vienna.

Europe is on the verge of a geopolitical panic attack. And the leaders in Brussels, Berlin, Paris and other capitals know, if they don’t do something quickly, disaster will occur.

Yet one big future disaster is about to occur because of Europe’s decision to rearm.

Europe is a small continent, but it punches well above its weight in importance. It is home to almost 748 million people. The EU has the second-largest economy in the world. Most major international conflicts—the Crusades, the Mongol invasions, the Thirty Years’ War, the Seven Years’ War, the Napoleonic Wars, World War i, World War ii, the Cold War—were fought in or had something to do with Europe.

And a timeless source predicts that there will be one more international conflict in the very near future. That source is the Holy Bible. And it says this next war will eclipse all others in bloodshed and destruction. Daniel 12:1 calls it “a time of trouble, such as never was since there was a nation even to that same time ….”

And this coming conflict has everything to do with what is going on in Europe right now.

“Europe will unite and it will become a formidable global dynamo,” writes Trumpet editor Brad Macdonald in his book The Holy Roman Empire in Prophecy. “The unity Europe attains will not be perfect; it will not come about easily or peacefully; and it certainly will not endure. But Europe is going to become a united superpower and a serious, daunting global power. The emergence of this new Europe will have far-reaching and dramatic consequences for us all.”

Request your free copy of The Holy Roman Empire in Prophecy to understand how and why.