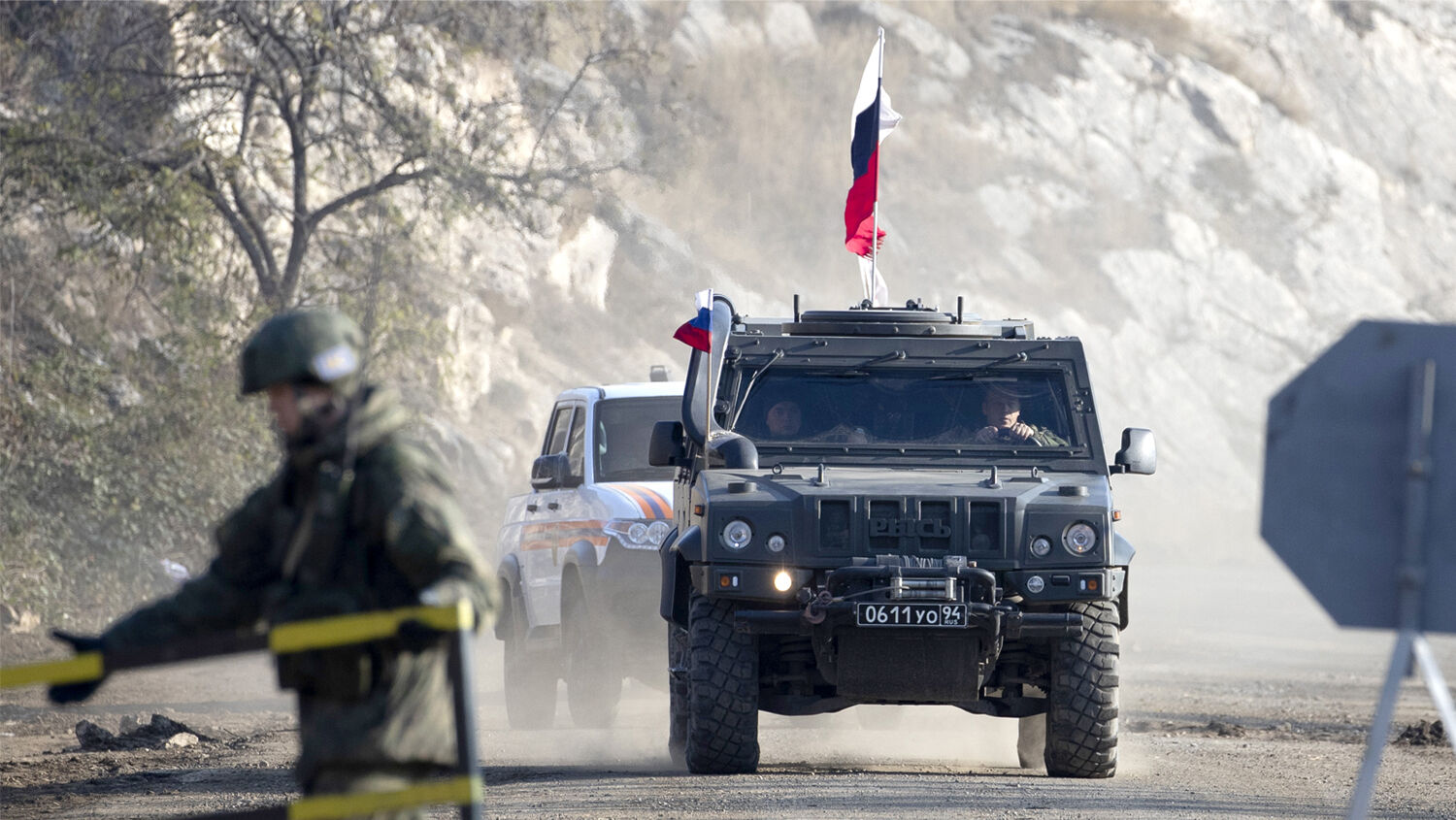 Russian vehicles arrive at a checkpoint of Russian peacekeepers and Azerbaijani troops near the town of Shushi.
Stanislav Krasilnikov\TASS via Getty Images

The president continues to reverse ‘the greatest geopolitical catastrophe of the century.’

After Russian President Vladimir Putin’s success in November at ending a territorial war between Armenia and Azerbaijan, he has made several notable moves to boost Russian power over the region.

Fighting between Armenia and Azerbaijan broke out on September 27 over the Nagorno-Karabakh region, which both nations claim. Tension had been building there for decades. After six weeks of war that may have killed as many as 5,000 people, Russia brokered a peace deal on November 9 to end the violence. Its terms gave most of the disputed territory to Azerbaijan.

The next day, Putin sent nearly 2,000 Russian soldiers and 470 military vehicles into Nagorno-Karabakh to keep the peace. But he didn’t stop there.

Putin is also bolstering Russian forces elsewhere in the region. On November 20, the Russian border guard service announced its deployment of 188 reinforcements to the Armenia-Azerbaijan border. The guards will be stationed in and between the towns of Tekh and Syrgyt.

As Russia continues to entrench itself in the region, it marks a significant geopolitical victory for Putin. He ended a bloody, six-week-long conflict between historical enemies. He emerged as a peacemaker, the embodiment of restorative calm between warring states. And in doing so, he managed to deepen Russia’s foothold in the heart of the highly valuable South Caucasus corridor—and in two former Soviet nations.

Early in his reign, Vladimir Putin famously declared the collapse of the Soviet Union was “the greatest geopolitical catastrophe of the century.” He has spent a great deal of his 20 years as Russia’s leader trying to reverse that “catastrophe.”

In 2008, his forces invaded Georgia and brought a fifth of the nation’s territory under Moscow’s control where it remains to this day. Six years later, he invaded Ukraine and annexed Crimea. Both Georgia and Ukraine were part of the Soviet Union before its collapse in 1991. And in both nations, Mr. Putin returned parts of their territory to Moscow’s control. Now he is positioned to do the same in the South Caucasus, though in a subtler way so far.

The South Caucasus corridor is uniquely valuable because it links Europe to Central Asia and Iran. It is a vital transit point for Caspian oil and gas, as well as other trade goods to Europe and the world. Historically, it has been a crucial passageway for goods between Europe and Asia. Alexander the Great saw its value, as did the Ottoman Empire.

Clearly, Vladimir Putin does as well.

The recent developments in Nagorno-Karabakh came as a surprise to many analysts and onlookers. But longtime readers of the Trumpet would expect this kind of Russian maneuvering in former Soviet nations.

In 2008, just after Russia’s invasion of Georgia, Trumpet editor in chief Gerald Flurry said the attack signaled that Russia had entered a “dangerous new era.”

“This was the first military strike of a rising Asian superpower,” he wrote, “and there will be more.”

How was Mr. Flurry able to accurately forecast what would happen? His understanding of Russia and its leader is based on Bible prophecy.

A prophecy in Revelation 9:16 says an army of 200 million men will form in the near future. Revelation 16:12 says this vast army is under the command of “the kings of the east.” A companion prophecy in Ezekiel 38:2 mentions a “prince of Rosh, Meshech and Tubal” (New King James Version). These ancient names denote Russia and some of its most important cities. Their “prince” is the overall head of this Asian force.

“I strongly believe Vladimir Putin is going to lead the 200 million-man army,” Mr. Flurry wrote in “Vladimir Putin Is the Prophesied Prince of Russia.”

“He is steadily rebuilding the Soviet empire,” he wrote. “This much is absolutely certain: The restoring of Russia’s power by Vladimir Putin—the prince of Russia—was prophesied! … Other nations are leaning toward an alliance with Russia. Several of them are prophesied to join.”

Putin’s maneuvers in Nagorno-Karabakh are bringing both Armenia and Azerbaijan more tightly under Russian control. He is doing what he can to reverse the fall of the Soviet empire—further vindicating Mr. Flurry’s Scripture-based forecasts in the process.

“We need to watch Vladimir Putin closely. He is the ‘prince of Rosh’ that God inspired Ezekiel to write about 2,500 years ago!” Mr. Flurry concluded. “We need to watch what is happening in Russia …. Russia’s resurgence—which we see happening in headlines every day—shows that end-time Bible prophecies are rapidly being fulfilled!”

Russia is on the move, and it won’t stop at Nagorno-Karabakh. Please request your free copy of Mr. Flurry’s booklet The Prophesied ‘Prince of Russia’ to fully understand all these prophecies and what they mean for the world and you.