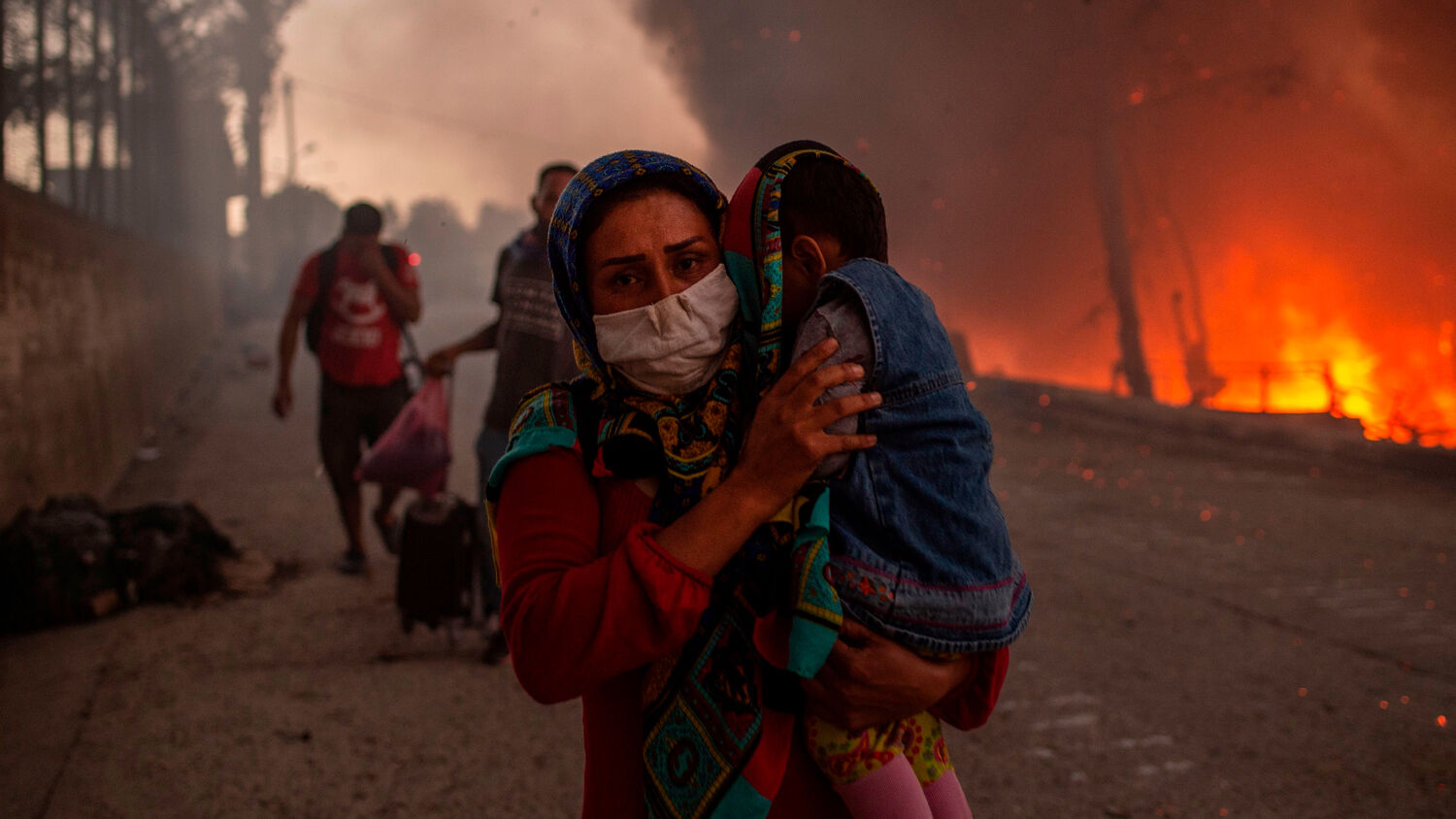 A woman carries a child past a major fire in the Moria migrants camp on the Greek Aegean island of Lesbos, on September 9.
ANGELOS TZORTZINIS/AFP/Getty Images

The harmony was short-lived: Terror attacks and the question of distributing refugees are concerning Europe again.

Fires destroyed facilities of the Moria refugee camp, Greece’s largest migrant camp on the island of Lesbos, on September 9, leaving nearly 13,000 people without shelter. While other European countries have refrained from taking in any refugees who have not been granted asylum, this unique situation has caused some nations to accept refugees in need. Additionally, on September 25, France suffered another terrorist attack.

Many are now asking the question: Is 2015 repeating itself?

Germany and Austria will never forget what took place in 2015 when the European Union was faced with one of its greatest crises. Millions of refugees fled from Northern Africa and the Middle East for shelter in Europe. The crisis left Europe radically changed and brought about new leadership in various countries.

“Kurz became Angela Merkel’s central European opponent when it came to migration,” Die Welt noted on September 16. “For Kurz, the topic is politically central in orchestrating his rise to the undisputed chancellor of his country, but many of the positions for which he was brought close to right-wing nationalists in 2015 and 2016 became the mainstream in Europe in the following years.”

In many ways, Europe adopted Sebastian Kurz’s way of handling the migrant crisis. But the September 9 crisis in Greece has rekindled the debate.

“The cause of the fire in Moria refugee camp on the Greek island of Lesbos remains unconfirmed,” the Independent noted on September 15, “but a government spokesperson has implied that refugees held there intentionally set the camp on fire to escape it.”

The conditions in the refugee camps are far from what refugees hoped to find when embarking on the dangerous migration to Europe. Many view what’s happening in Lesbos as a humanitarian crisis and want to relieve the refugees from their distress. Chancellor Kurz believes that would be the wrong thing to do.

In a video message, Kurz talked about what would happen if refugees were distributed from Moria directly into the EU without proper asylum procedures. “If we give in to this pressure now, we risk making the same mistakes we did in the EU in 2015,” he said. By saying “we,” Kurz “of course meant Angela Merkel,” Die Welt noted.

She countered on Monday. … Austria’s role in the European refugee policy is “not good,” she said. One could not ask for a financial discount on the EU membership fee and at the same time want to stay out of the distribution of refugees.

Germany has decided to take in 1,553 refugees from the Moria refugee camp. Yet Kurz is sticking to his strong stance in the refugee policy despite the fact that his coalition partner, the Greens, is urging him to change course.

Hungary and the Czech Republic have also rejected the proposals of the EU Commission for a reform of the migration policy. “The basic approach is still unchanged,” criticized Hungarian Prime Minister Viktor Orbán on Thursday in Brussels. “You want to manage migration and not stop the migrants.” It is not enough to replace the term “quota” with “resettlement,” he said.

The topic of refugees has divided Europe again. At the same time, another terror attack has shocked Europe. Two people were injured in a stabbing near the former Charlie Hebdo editorial office in Paris on September 25. The French interior minister referred to the attack as an “Islamist act of terrorism.”

Turkey and Greece are currently the main countries holding off large numbers of refugees from entering Europe’s mainland. Both countries, however, have faced economic difficulties and are at conflict with one another. What’s more, the civil war in Syria continues to rage, and analysts see the seeds of many more such crises in other North African countries.

Iran, the chief sponsor of terrorism in the Middle East, is becoming more and more desperate to achieve its goals. An alliance is forming between moderate Arab states and Germany. United States President Donald Trump has also signed various peace agreements that are intended to ally previously hostile Arab states with the Jewish state of Israel. While “The Abraham Accords Declaration” is meant to ensure the existence of Israel, it is also a clear pact against Iran.

Die Welt reported on September 22 in “The Real Fronts Can Now Be Seen”:

Is the Middle East really different just because Israel made peace with the United Arab Emirates and Bahrain? After all, the Gulf Arabs have been working with Israel against their common enemy, Iran, for years. This contrast shapes the region: On the one hand, the ruling Shiite clergy in Tehran, who, under the banner of the “Islamic Revolution,” are questioning the balance of power in the region; and on the other, those states that see Iran as a threat, including not only the Sunni Gulf monarchies, but also the Jewish state and secular forces in various other countries.

We can expect Iran to act increasingly more aggressive in the Middle East, increasing the pressure on Europe to act. The Bible reveals that after the U.S. has withdrawn from the Middle East, Germany is prophesied to confront Iran.

“Northern Africa is turning into a battleground with enormously important prophetic implications,” wrote Trumpet editor in chief Gerald Flurry in the April 2013 Trumpet issue. He discussed the spread of Iran-backed terror groups but also warned that “Iran isn’t the only one interested in Africa. Germany is making strong inroads as well. Both of these powers are racing to get as much control of North Africa as they can. They will inevitably clash with each other.”

In the Bible, Psalm 83 describes an alliance between Arab nations and Germany. Specific nations mentioned in the Psalm 83 prophecy include Assur (Germany), Edom-Amalek (Turkey), Ishmaelites (Saudi Arabia and neighboring nations), and Moab-Ammon (Jordan).

In his recent Key of David titled “Psalm 83 Prophecy,” Mr. Flurry explained that recent events will lead to this prophesied clash. Please watch that program for more details on this developing alliance. Also request a free copy of The King of the South for a detailed explanation of these underlying prophecies. Every day we see more and more news of these prophecies being fulfilled.