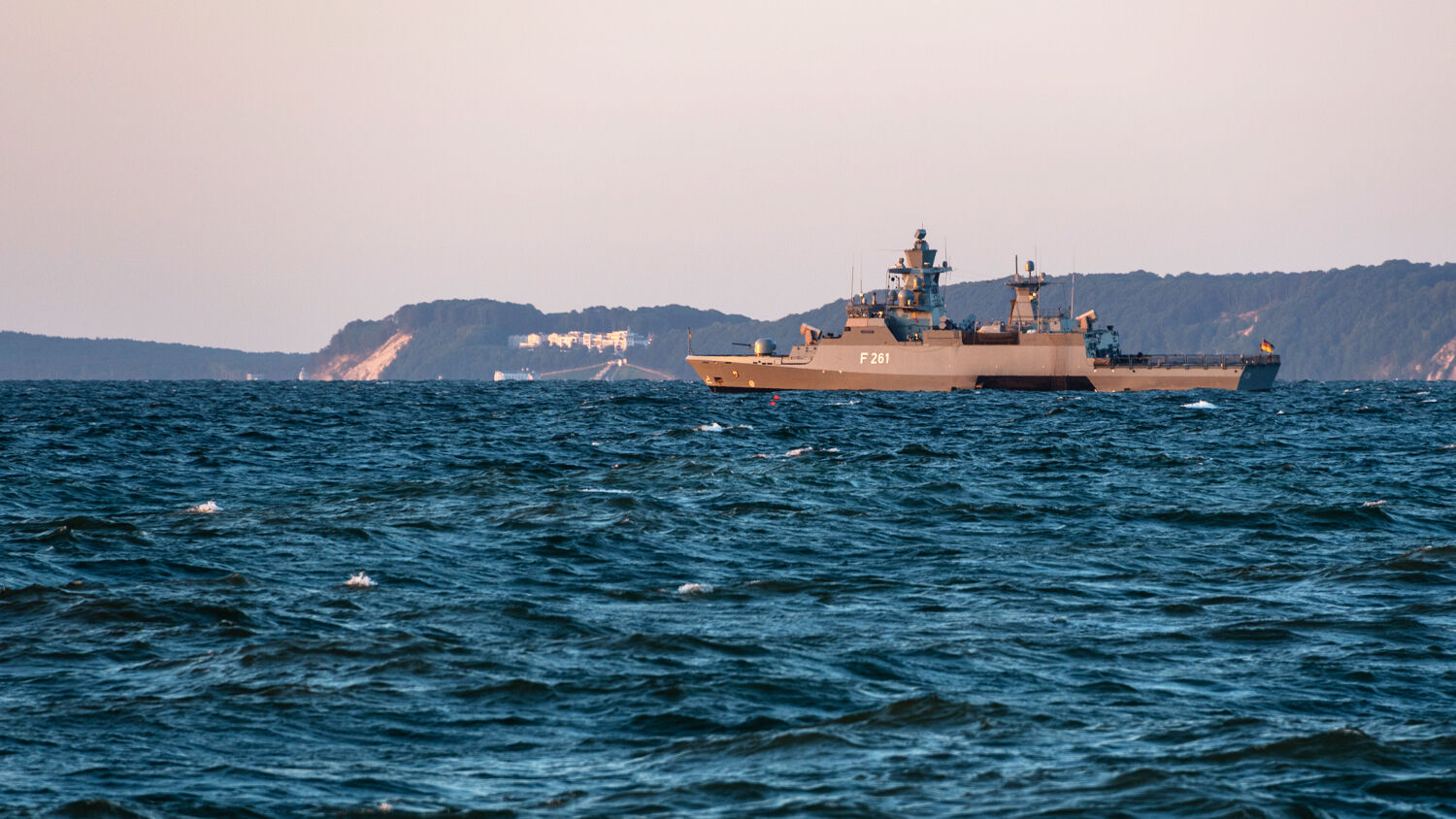 The corvette Magdeburg (K130), which belongs to the 1st corvette squadron at Rostock-Hohe Düne, crosses off the island of Rügen on August 12.
Stephan Schulz/dpa-Zentralbild/ZB/Getty Images

Germany’s K130 corvettes are due to be repaired and modernized in 2025, but a cost-benefit analysis concluded that it would be cheaper to build new warships. Germany also intends to update its warships with additional rbs15 Mk3 anti-ship missiles and the installation of laser cannons.

The Bundeswehr’s five K130 corvettes that were delivered to the Navy in 2008 are currently involved in the United Nations mission to secure peace between Lebanon and Israel and to prevent arms smuggling. In 2017, the Bundestag decided that the Bundeswehr should have 10 operational corvettes available, so the construction of five more K130s was commissioned in a consortium of North German shipyards. Now, the order of a third batch is being discussed.

“[T]he old corvettes suffer from ‘obsolescence’; in other words: Their technology is out of date. From 2025, they would have to be overhauled anyway,” Handelsblatt noted on August 31. “New construction instead of permanent repairs: The Navy would like to order five more new warships instead of having the existing corvettes K130 extensively repaired and modernized in 2025. The Navy has a good chance that the Bundestag will fulfill this wish, which is expected to cost [$3.3 billion].”

German defense politicians are recommitted to strengthening the Bundeswehr after decades of saving, as Handelsblatt noted:

At the end of 2016, the housekeepers Eckhardt Rehberg (Christian Democrat) and Johannes Kahrs (Social Democrat) came forward to ask for five additional K130s. They were appointed in 2017, shortly before the general election. The argument: The Bundeswehr has too few ships for the increasing number of foreign deployments and the growing threat from Russia.

Another argument at the time was that a second batch of five corvettes could be built faster than larger frigates of the multipurpose combat ship mks 180. Because the corvettes, it was said at the time, were basically just a repeat order for existing ships.

This reveals the real reason for the demand for new ships: Germany wants to expand its navy. Germany’s Defense Ministry will likely grant the demand.

The timing for the new orders may also be ideal. Due to the coronavirus crisis, the federal government promised a $154 billion economic stimulus package that will help the armaments industry.

Naval News reported on September 11 that Swedish company Saab received an order from its German partner Diehl Defense for rbs15 anti-ship missiles. The order value is approximately $190 million, with deliveries between 2022 and 2026. “The rbs15 missiles and launcher systems provided in this order will be placed on the German Navy’s K130 Braunschweig-class corvettes, a Saab press release noted. In addition to the missile systems, the order also includes associated equipment and services.”

Germany also already ordered four multipurpose mks 180 combat ships. The mks will be able to “patrol large sea areas for a long time all over the world, monitor embargoes, and, if necessary, evacuate German citizens from crisis situations … and, if necessary, engage in naval combat against other warships of its kind or underwater. No other single ship type can fulfill such a wide range of tasks,” the Bundeswehr’s website wrote. The same website proudly declared that the “K” in “mks” stands for “Kampf”—the German word for combat.

The advantage of the laser weapons is the higher speed compared to fired ammunition and the high precision with which only certain components of a target can be hit.

As long as a laser weapon has enough power, it can be used. So it has no ammunition magazine that needs to be replenished. A big advantage is that laser weapons are scalable. … Their effect can be dosed, and thus an opponent may be warned first.

Last October, Germany announced that it would produce six more Type-212 diesel-electric attack submarines, two of which would be included in its own Navy, bringing Germany’s total to eight.

“The Type-212 is one of the best submarines in the world and one of the most widely exported,” Trumpet contributor Daniel Di Santo explained in “Germany’s Silent Weapon.” Germany “has become a global leader in designing small, stealthy submarines that can effectively patrol littoral waters at a fraction of the cost of nuclear-powered submarines,” reported National Interest.

Germany is preparing for war at sea.

People today are paying little attention to this nation’s military endeavors. Historically, this has proved fatal. After World War i, people largely ignored German weapons development. But one man in Britain sounded the alarm about Germany’s deceptive tactics and advancements in developing military technology.

Concerning Germany’s growing air power at the time, Winston Churchill said in a speech on Nov. 28, 1934, “So far, I have dealt with what I believe is the known, but beyond the known there is also the unknown. We hear from all sides of an air development in Germany far in excess of anything which I have stated today. As to that, all I would say is, ‘Beware!’ Germany is a country fertile in military surprises.”

Despite his warning, the world was surprised by Germany’s military advances. After the war, Allied leaders gathered in Germany in 1945 to sign the Potsdam Agreement. Hoping to prevent the world from making the same mistake, they demanded “the complete disarmament and demilitarization of Germany and the elimination or control of all German industry that could be used for military production.”

Germany still has to deal with certain regulations today, but its military industry is ready to move forward. The Allies’ warning after World War ii now holds little meaning.

Many believe that Germany is rearming so it can contribute its fair share to nato or in defense against Russia. While that is certainly part of it, there is a much more sinister reason for Germany’s rearmament.

The nation has planned this rearmament for a long time. Late educator Herbert W. Armstrong told radio listeners on May 9, 1945: “From the very start of World War ii, [the Germans] have considered the possibility of losing this second round, as they did the first—and they have carefully, methodically planned, in such eventuality, the third round—World War iii!”

What Churchill didn’t know and what most people today fail to realize is that Germany’s rise to power was prophesied in the Bible. Revelation 17:10 reads: “And there are seven kings: five are fallen, and one is, and the other is not yet come; and when he cometh, he must continue a short space.” The “one is” refers to Adolf Hitler’s Third Reich. This prophecy was revealed to Mr. Armstrong who saw the rise and fall of Hitler’s Nazi regime. After the war, Mr. Armstrong prophesied of the one that “is not yet come.”

The Bible warns specifically about Germany’s deceptiveness. The book of Nahum is directed at the descendants of ancient Assyria: the modern Germans. “Woe to the bloody city! it is all full of lies and robbery; the prey departeth not; The noise of a whip, and the noise of the rattling of the wheels, and of the pransing horses, and of the jumping chariots. The horseman lifteth up both the bright sword and the glittering spear: and there is a multitude of slain, and a great number of carcases; and there is none end of their corpses; they stumble upon their corpses” (Nahum 3:1-3). Consider what Trumpet editor in chief Gerald Flurry notes about these verses in his free booklet on Nahum:

“[T]he prey departeth not”—there is a continual history of preying on other nations! The nations of Israel need to be warned about Germany’s military strategy. Germany is “full of lies and robbery”—or it could read, “deceit and murder.” It is full of deceit! It doesn’t just have a little deceit—it is full of it!

Germany has always planned to remilitarize, as Mr. Flurry explains in Germany and the Holy Roman Empire. Its arms industry has financed itself through exports for decades, and now it is ready to arm the nation with world-class military equipment.

Request a free copy of Germany and the Holy Roman Empire and Nahum—An End-Time Prophecy for Germany, by Gerald Flurry, to learn why and how Germany is rearming. While the Bible prophesies of a coming horrifying war, it is the only book that gives real hope instead of illusions. This free literature will explain why we are living in such a dangerous, perplexing world.