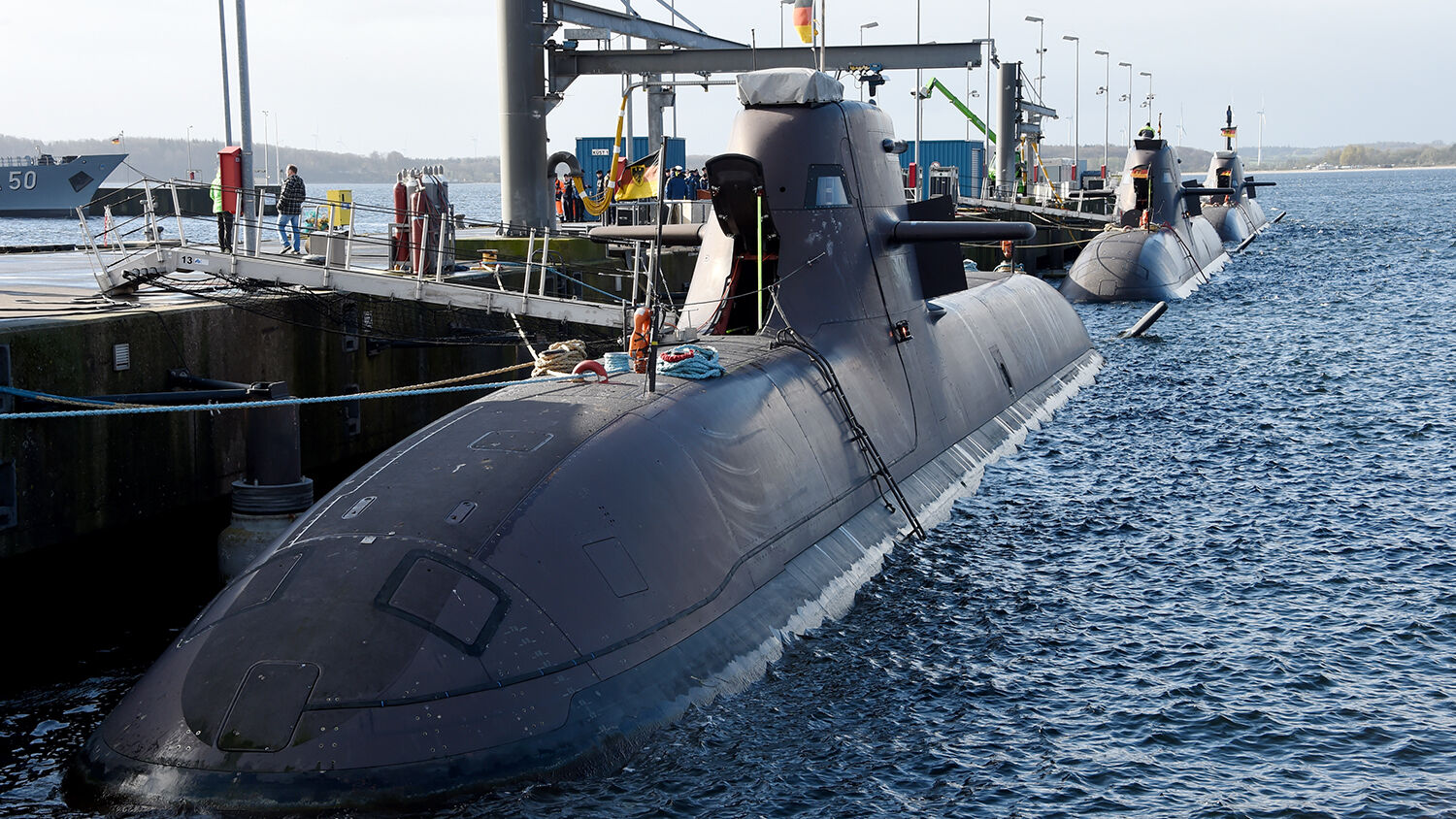 Three German Class 212A submarines at the submarine dock in Eckernforde, Germany
Photo by Carsten Rehder/picture alliance via Getty Images

What can we learn from Germany’s newest U-boats?

Germany’s submarine fleet is doing its job well—for the most part, it goes unnoticed by the world. But you should pay close attention to it. Germany has always excelled at military surprises, and its submarines make it well prepared to do this again.

Germany announced in October that it will produce six more Type 212 diesel-electric attack submarines. Four will go to Norway, and two will be made for its own navy, bringing Germany’s total to eight. Italy has budgeted for two more, potentially adding to the four it already owns.

The Type 212 is one of the best submarines in the world and one of the most widely exported. Germany “has become a global leader in designing small, stealthy submarines that can effectively patrol littoral waters at a fraction of the cost of nuclear-powered submarines,” said National Interest.

What makes these modern U-boats so special? Germany’s shipbuilding industry is a world leader in the field of air-independent power. This technology uses fuel cells, which last much longer than batteries, to power everything onboard the ship. They can even provide silent propulsion, driving an electric motor that turns the propeller. This allows the submarine to avoid charging its batteries with the noisy diesel generator. As a result, it can stay underwater longer than older models.

If a burst of speed is necessary, the Type 212 can switch over to a lead-acid battery. But when speed is not needed, it can rely on these fuel cells to lurk, listen and stealthily attack.

Ballistic missile submarines are prized for their ability to remain underwater for months thanks to nuclear power. By contrast, attack submarines like the Type 212 play a different role: Their primary duty is to destroy the enemy’s fleet. As far as non-nuclear submarines go, the Type 212 has one of the best underwater endurance capabilities, able to go three weeks without surfacing (the actual endurance of a submarine is often a closely guarded secret).

Some have criticized the Type 212 for lacking the impressive diving depth of Russian and American submarines. Being diesel-powered and not nuclear, it cannot stay submerged for months either. And it cannot sustain high speeds on a battery.

But it was never intended to do these things. The Baltic Sea, where these submarines are based, averages only 50 meters deep. This is shallow for a submarine, even for the Type 212, which can dive 200 meters (the actual diving limit of a submarine is always highly classified). Instead, this submarine is optimized for stealthy, fast attacks. It does not need sustained high speeds, only bursts of speed. And when running on a battery, it is quieter than a nuclear-powered craft because there is no need for coolant pumps to prevent the reactor from overheating.

Attack submarines must be maneuverable, fast and, above all, quiet. In all these fields, Germany’s Type 212 excels.

Though operating primarily in the Baltic Sea, these submarines are not confined to it. “In recent times, the Navy has broadened the scope of its submarine operations,” wrote Jane’s International Defense Review. The Nuclear Threat Initiative wrote that “during the past decade, the German Navy has expanded its operating area to cover the littoral waters of Northern Europe [the North Sea], the North Atlantic and the Mediterranean Sea.”

In the shallow, cold Baltic, these relatively compact submarines have a deadly trick. They are small enough to lurk just below layer depth, the level at which water temperature begins to dramatically cool off. The cooler water changes the angle at which sound waves penetrate it, creating an acoustic deadzone where the sub is much less likely to be detected.

Germany’s small submarines are not just dangerous in theory. Real-life examples from around the world prove crafts of this size and smaller can be exceptionally dangerous.

Sweden’s Gotland class submarine is the best example. They are based in a similar region and play a similar role to the Type 212. These small diesel-powered subs are arguably the world’s quietest. In war game exercises with the U.S. Navy, they repeatedly sank carriers and cruisers, in some cases sailing rings around them, undetected. Over a two-year period, they convinced American anti-submarine warfare experts that their technology was not up to the task of dealing with small, quiet submarines.

Germany’s Type 212 follows a similar concept. “We strongly believe that the major advantages our submarines have and should keep is their stealthiness, and therefore, they have to remain compact in size,” said Capt. Joachim Brune, head of the German Navy’s test and evaluation center. “If you enhance the payload, you need more space. Then you will have to make trade-offs and compromises that you might not want to make.”

For all their lethality, these subs are incredibly cost-effective at $394 million each. By comparison, a single Virginia Class attack submarine costs $2.8 billion. This means that Germany’s entire submarine fleet costs less than just one of these American leviathans. The Type 212 is crewed by less than 30 people; the Virginia class requires a crew of 132.

The Type 212 is also flexible. Its export version is a common sight in smaller navies. These are often highly modified. The best example is Israel’s Dolphin class, which has a pair of mega-sized torpedo tubes. These can be used for divers, or—as most analysts agree—to launch nuclear missiles. By exporting to Israel, as well countless other small navies, Germany increases its expertise and industrial capabilities.

Europe’s adversaries have also adopted this approach. Iran uses Russian-made Kilo-class submarines, a diesel-electric craft similar in purpose to the Type 212. In addition, it operates the much smaller Ghadir mini-subs.

North Korea also operates midget subs. These once scared the U.S. and South Korea when 70 percent of them—or 50 subs— mobilized and disappeared for a week. A North Korean midget sub was also blamed for sinking the South Korean warship Cheonan.

Together, Europe’s submarine forces are powerful. And Germany is positioning itself as the leading developer of these advanced weapons.

This is certainly concerning for Germany’s potential enemies. Should current allies also be concerned?

Nearly everyone today will say Germany poses no threat to its neighbors. The same mentality that existed after the First World War exists today. But everyone, including today’s superpowers like the United States, needs to watch Germany more closely.

It may look like a pacifist. It only has a few submarines. But it is the world’s fourth-largest arms exporter. It has advanced military technology. Its industrial might makes it easy for Germany to produce more should the need arise. It could also choose to keep what it currently exports.

Trumpet editor in chief Gerald Flurry wrote in the January 2020 Trumpet issue that its military “could be expanded and updated swiftly” and even though the nation currently lacks a strong leader to make that decision, “this will change overnight when a strongman gets control!”

Mr. Flurry drew attention to Germany’s submarine construction as one example. “Germany today is a leading weapons manufacturer …. It is even building submarines that can carry nuclear warheads!” he wrote, referring to Israel’s German-built Dolphin class.

Germany’s lack of military emphasis will soon change. The nation’s transformation under Hitler “will not even compare to what is coming,” wrote Mr. Flurry. “The nation that started the Second World War has an advanced military industry, one capable of building equipment to silently and stealthily deliver a nuclear attack. What kind of danger is there in that? How many people even realize this?”

Mr. Flurry makes such bold statements about Germany’s future because of specific biblical prophecies. Revelation 17:10 describes the seven revivals of the Holy Roman Empire throughout history. Six have come and gone. The seventh is on its way right now. Our free book The Holy Roman Empire in Prophecy details the history and prophecy behind this and explains why you should be watching for the final resurrection of this violent empire.

Germany’s submarines are built for surprise. They are a symbol of Germany’s rise: quiet but powerful, and in the near future, deadly. Winston Churchill warned, “Germany is a country fertile in military surprises.” This rings true today.

You must watch Germany’s rearmament. The Bible says this nation will take the helm of a conquering European superpower very shortly. The world will be surprised. It will be too late for most. But you don’t have to be taken by surprise. Order your free copy of The Holy Roman Empire in Prophecy today.