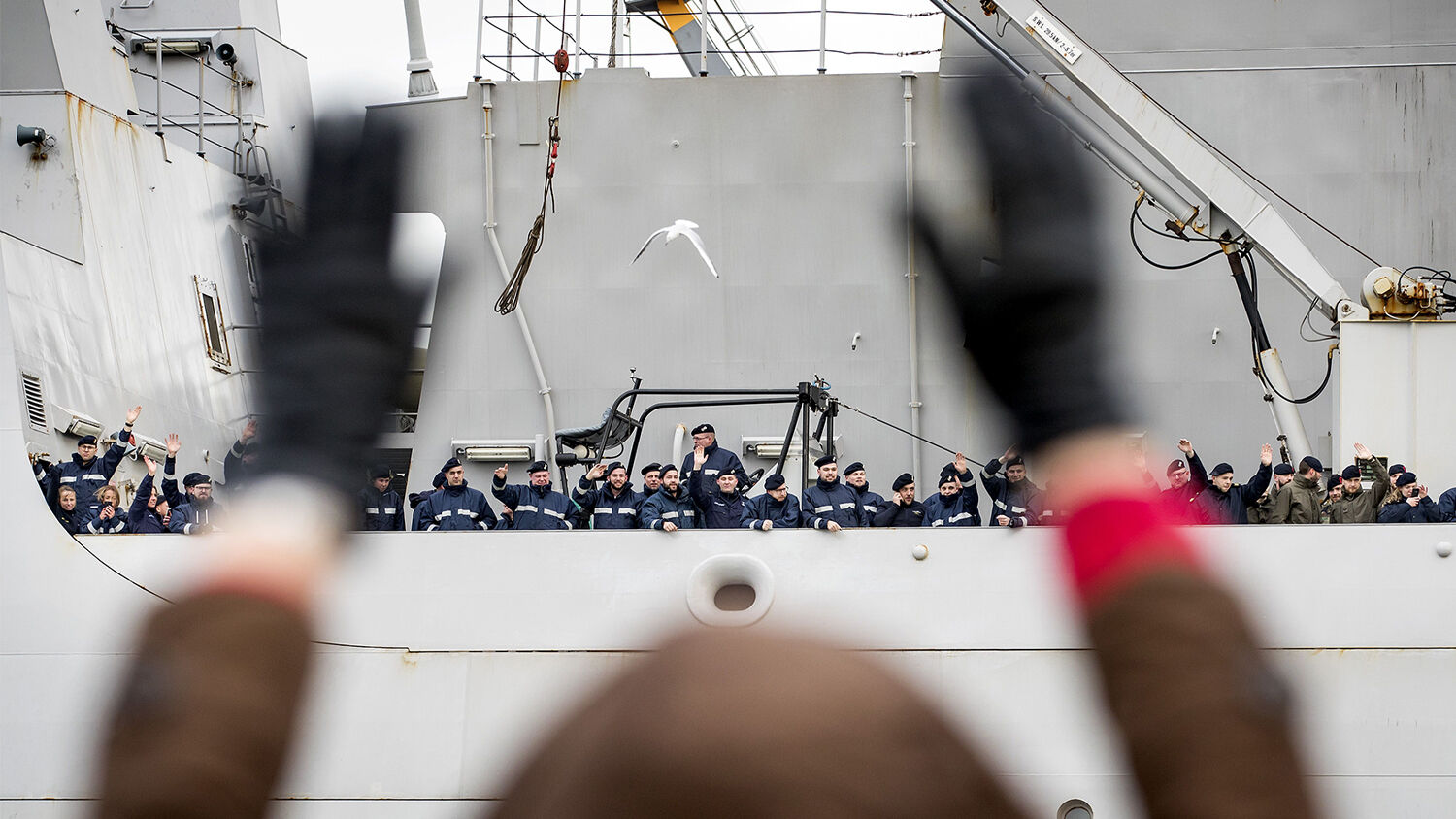 People wave from the docks on January 28 as the air-defense and command frigate hnlms De Ruyter of the Royal Netherlands Navy departs from its harbor of Den Helder for the Strait of Hormuz.
AFP/Getty Images

Dutch and German shipyards join forces for the new mks 180.

New global challenges urge Germany to prepare for war on the sea. A total of $5.8 billion is estimated for the procurement of four multi-purpose mks 180 combat ships. According to Handelsblatt, this “is the largest naval order of this type in the history of the Bundeswehr, and it is to be realized—a novelty—under the leadership of the Dutch shipyard mainly in Blohm and Voss in Hamburg” (Trumpet translation throughout).

Germany has one of the largest merchant fleets in the world. It is working to acquire the necessary warships to defend that dominance and extend its global power.

Regarding the mks 180, faz.net noted on May 19 that Germany’s “navy in the future should not only be able to help with their ships but also fight.”

The German shipyards previously worked to delay the contract of the mks 180. However, that is now changing. “Earlier this year,” Defense News recounted, “German Naval Yards Kiel lamented an unfair evaluation of its mks 180 bid by the Defense Ministry, announcing it was prepared for a potentially lengthy legal battle.” The German shipyard has now dropped the case, removing one of the last few remaining obstacles for the construction of the warship.

The #MKS180 Multi-Purpose Combat Ship Program of the German Navy (@deutschemarine) is back on track following an official announcement by German Federal Minister of Defence @akk ⚓️@damen https://t.co/Jt69wQlpwG

German shipyards have been divided fighting over orders, but the Defense Ministry’s decision to order its largest naval procurement from a Dutch shipyard has caused the German naval yards to lay aside their differences and join forces—not only with each other, in the Bremer Lürssen Group, but also with the Dutch shipbuilder. The Dutch shipyard, Damen, said it would lean heavily on its German partners in the vessels’ construction. “We are pleased with the consolidation of the German shipping industry under the leadership of the Bremer Lürssen Group,” it said. “We look forward to intensive cooperation in the future. At Damen, we see this consolidation as a positive development.”

The “merge has dislodged a major legal roadblock in the multibillion-dollar program to build the Navy’s mks 180 large frigate-type warships,” Defense News wrote.

“Yesterday evening, a heavy burden fell from my heart. I am pleased that we can now continue in the procurement process for the mks 180,” marine inspector Andreas Krause wrote on Twitter. “We need these ships so badly to fulfill the tasks assigned to us.”

Leading German shipbuilder ThyssenKrupp Marine Systems had previously reported that it would be part of the German consolidation talks, arousing speculation of the emergence of a national shipbuilding “champion.” However, ThyssenKrupp never actually joined the Bremer Lürssen Group. It could, however, join at a later time.

“Whatever happens next,” Defense News wrote, “it appears a broader move toward naval-industry consolidation may be gaining steam in the wake of the Lürssen-gny Kiel deal, according to experts.”

“The cards are reshuffled,” said Sebastian Bruns, a naval analyst with the University of Kiel in northern Germany. “The consolidation is a significant step forward—and potentially not the final evolution in the central European warship sector.”

The mks will be able to “patrol large sea areas for a long time all over the world, monitor embargoes, and, if necessary, evacuate German citizens from crisis situations, … and, if necessary, engage in naval combat against other warships of its kind or underwater. No other single ship type can fulfill such a wide range of tasks,” the Bundeswehr’s website wrote. The same website proudly declared that the “K” in “mks” stands for “Kampf”—the German word for combat.

The mks 180 is an all-purpose weapon. Designed with the ability to have different modules installed, the ship can be deployed around the globe in a variety of combat missions. In its basic version, the mks is a full-fledged combat ship. But through its interchangeable components, its core capability can be adjusted. Various versions of the mks 180 have already been created.

‘The replacement and commissioning of the modules can be carried out as quickly as possible and worldwide,” stated the Bundeswehr. The modules can thus withstand the climatic and oceanographic conditions of their respective fields of operation. Thus, the mks will be able to be used in the tropics as well as in polar waters.

“The size of the new warship is impressive compared to previous ships of the German Navy because, among other things, they need enough space for the different modules. The naval planners calculated a length of around 155 meters and a water displacement of up to 9,000 tons for the multipurpose combat ship,” the Bundeswehr explained. “For comparison: the frigates of the Baden-Württemberg class are a good five meters shorter and almost 2,000 tons smaller. And these ships are almost twice as big as the frigates of the Bremen class.”

The new ships will be able to remain in an area of operation for up to two years, while the approximately 110-men crews will rotate every four months.

The mks 180 will add a significant contribution to Germany’s already increasing maritime power. Last October, Germany announced that it would produce six more Type-212 diesel-electric attack submarines, two of which would be included in its own Navy, bringing Germany’s total to eight.

“The Type-212 is one of the best submarines in the world and one of the most widely exported,” Trumpet contributor Daniel DiSanto explained in “Germany’s Silent Weapon.” Germany “has become a global leader in designing small, stealthy submarines that can effectively patrol littoral waters at a fraction of the cost of nuclear-powered submarines,” said National Interest.

In cooperation with other European forces, Germany is quietly gearing up to rule the waves.

Allied leaders gathered in Germany in 1945 to sign the Potsdam Agreement that demanded “the complete disarmament and demilitarization of Germany and the elimination or control of all German industry that could be used for military production.”

Germany today is proudly proclaiming the development of warships that can provide not only crucial assistance in crisis areas but also combat enemy warships. That is exactly what the Allied forces pledged to prevent. What happened to those pledges?

German militarism was never completely destroyed. Its arms industry only temporarily stopped production and entered the civil industry. Those same industries have reentered the arms industry. Some of the same companies that enabled Germany’s rise in World War ii are arming the nation again today.

At the time when everyone was hoping for peace, as Germany was disarmed, Herbert W. Armstrong prophesied that Germany would rise again. In a radio broadcast on May 9, 1945, during the first conference of the United Nations, he said: “The war is over, in Europe—or is it? We need to wake up and realize that right now is the most dangerous moment in United States national history, instead of assuming we now have peace! … We don’t understand German thoroughness. From the very start of World War ii, they have considered the possibility of losing this second round, as they did the first—and they have carefully, methodically planned, in such eventuality, the third round—World War iii!”

While Germany lay in ruin and world leaders pledged it would never rearm, Mr. Armstrong warned that it would rise to dominate Europe and regain military strength. We are seeing that happening today.

Together with France, Germany is working on a new Main Ground Combat System and Future Combat Air System. In doing so, Germany, France and other European nations have joined forces in creating new tanks and fighter jets that are predicted to be the best in the world.

Individually, these developments may seem of little concern, but taken together, it becomes clear that Germany’s industries are preparing for war. The current orders may seem small, but the groundwork is being laid for sudden rearmament.

Germany has always planned to remilitarize, as Trumpet editor in chief Gerald Flurry explains in Germany and the Holy Roman Empire. Its arms industry has financed itself through exports for decades and now it is ready to arm the nation with world-class military equipment.

It is no coincidence that we are seeing the reemergence of far-right ideologies at a time when the restraints imposed on the German military are being loosened.

It is a well-documented fact that many former Nazis settled in the newly formed Bundeswehr for the purpose of reviving the nation’s militarism. The Bible explicitly prophesies that this power would go underground for a short time, eventually reemerging in an even more powerful force. Using the symbol of a beast for an empire, Revelation 17:8 warns: “The beast that thou sawest was, and is not; and shall ascend out of the bottomless pit, and go into perdition: and they that dwell on the earth shall wonder, whose names were not written in the book of life from the foundation of the world, when they behold the beast that was, and is not, and yet is.”

Adolf Hitler’s Nazi empire did go underground. And we are now seeing it reemerge. Request your free copy of Germany and the Holy Roman Empire to learn how the Bible’s prophecies are being fulfilled.