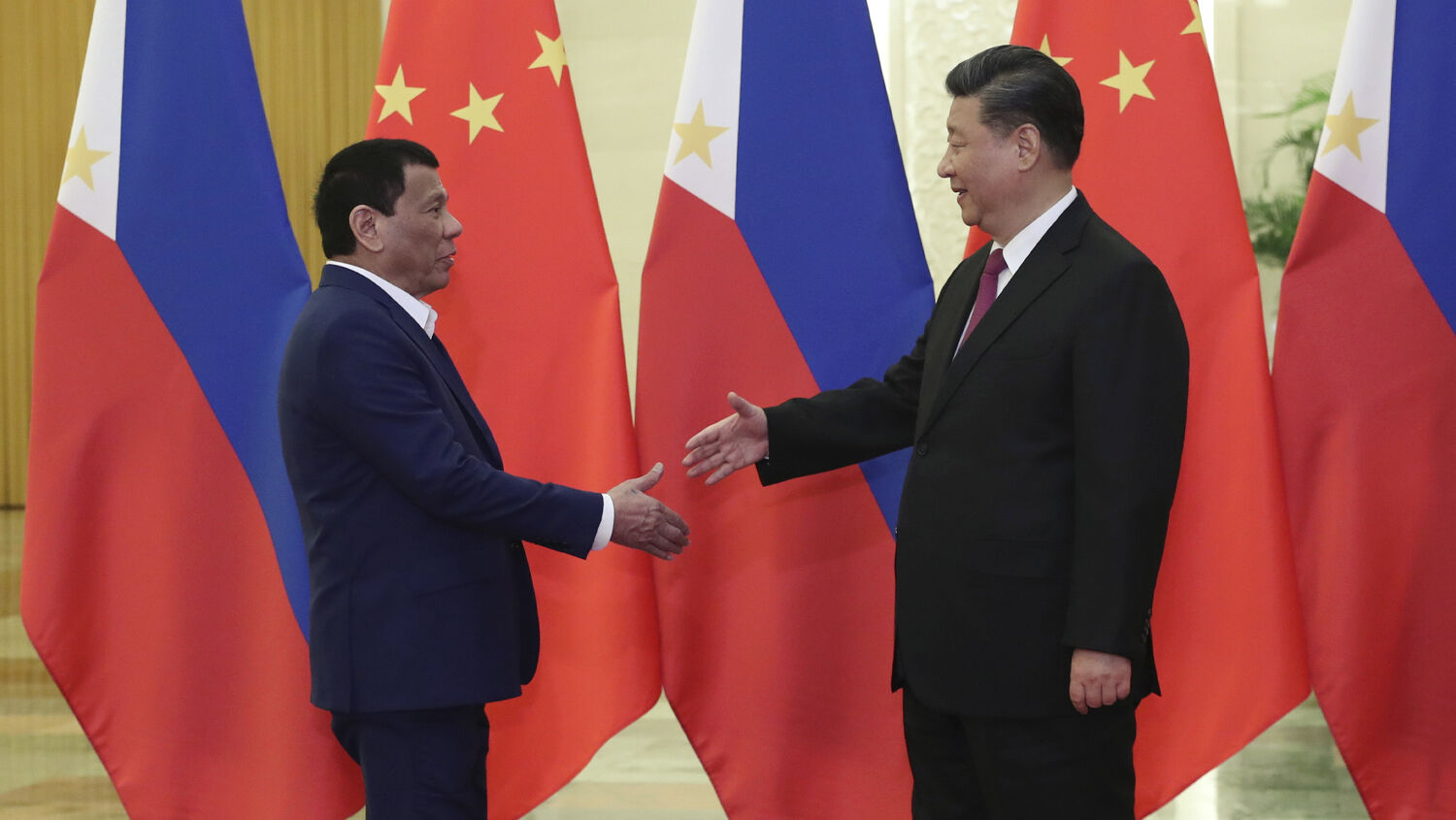 Whether he genuinely fears war or is only appeasing China, the president’s remarks are consistent with an aim that has been evident throughout his presidency: to move the Philippines away from Washington and toward Beijing.

Philippine President Rodrigo Duterte forbade America on July 27 from greater military base access in his nation, saying that China now controls the South China Sea and that boosting America’s military footprint near it would provoke nuclear war.

“I have nothing against America,” Duterte said during his annual State of the Union address delivered at the Batasang Pambansa in Quezon City. But China is “in possession of the property,” he said, referring to the South China Sea.

China claims about 80 percent of the 1.3 million square miles of resource-rich sea, despite international laws saying much of it is the territory of Brunei, Indonesia, Malaysia, the Philippines, Taiwan and Vietnam.

China rejects these laws, even though a 2016 ruling by the Permanent Court of Arbitration in the Hague affirmed them and awarded the Philippines a landmark victory. China has made a mockery of all such laws and rulings in recent years by creating more than 3,000 acres of land on seven reefs, some of which lie in waters belonging to other nations. On these new South China Sea islands, Beijing has deployed surface-to-air missiles, antiship cruise missiles, and airstrips accommodating cargo planes, fighters and bombers. It routinely demonstrates its power over the area by blocking Vietnam, the Philippines and other claimants from extracting resources from waters that the law stipulates are their own.

Duterte would like to regain Philippine control over its territorial waters. But he says China’s hold is now too tight to challenge. “China is claiming it, we are claiming it,” he said. “China has the arms” and is “in possession of the property. … So it is simple as that.”

The Philippine president is essentially saying that, despite what the law may say, “might makes right.” And the only way to reclaim what Beijing has seized would be to diminish China’s might by winning a war against it. Duterte believes that option would not be possible for him: “Maybe some other president can, but I cannot,” he said. “I am inutile in that aspect, I tell you, and I’m willing to admit it. I am really inutile. I can do nothing about it.”

When Duterte made such statements about the South China Sea in the past, the implication was that the Philippines should not confront China because it cannot rely on the Mutual Defense Treaty, under which America would fight alongside the Philippines in a war.

This time, however, he stressed that American intervention on the Philippines’ behalf could trigger nuclear war in the region. “[I]f you put [American] bases here, you will double the spectacle of a most destructive thing,” he said. “If war breaks out” then “atomic arsenals” would “ensure the extinction of the Filipino race.”

The way to move forward, Duterte said, is to “just call off” any plan “to retake forcefully or physically the South China Sea.” Instead, the Philippines should proceed with “diplomatic endeavors.”

On a note that was likely related to this capitulation, Duterte mentioned a favor he recently asked of Beijing. “[L]et me just mention it in passing that about four days ago, I made a plea to [Chinese] President Xi Jinping that if they have the vaccine, can they allow us to be one of the first or if is needed, if we have to buy it, that we will be granted credit so that we can normalize as fast as possible.”

Whether Duterte genuinely fears nuclear war or is only appeasing China, the remarks are consistent with an aim that has been evident throughout his presidency to move the Philippines away from Washington and toward Beijing.

Duterte came into office in 2016, at the tail end of eight years of the Obama administration failing to counter China’s bullying of the Philippines in the South China Sea. Early in his presidency, he lashed out at U.S. President Barack Obama personally after members of his administration criticized human rights violations taking place as a result of Duterte’s anti-drug campaign. He also said America’s military should prepare to exit the Philippines.

In remarks to his own government, Duterte said that back when Russia annexed the Crimean Peninsula from Ukraine, America “wasn’t able to do anything.” In light of this, he referred to the Philippines’ defense pact with the U.S. and asked his cabinet: “Do you really think we need it?”

In August 2019, he visited Beijing and ramped up the rhetoric to a new level, announcing his nation’s “separation” from the U.S. and a realignment with China. “America has lost now. I’ve realigned myself [with China’s] ideological flow,” he said. “And maybe I will also go to Russia to talk to [President Vladimir] Putin and tell him that there are three of us against the world: China, Philippines and Russia. It’s the only way.”

Later, at the behest of high-ranking officers in the Philippines military, Duterte softened some of his anti-America statements, saying he only wished to develop a more independent foreign policy so he could establish a warmer relationship with China. Despite the partial backtracking in words, Duterte’s actions make plain that he is willing to forsake ties between the Philippines and America in order to fortify his nation’s relationship with China.

Meanwhile, Duterte gave Xi a momentous gift when he declined to acknowledge the high-profile 2016 victory that The Hague gave to the Philippines when it ruled against China’s claims in the South China Sea. Duterte’s decision to essentially ignore the international court’s ruling represented perhaps the deepest act of subservience the Philippines could make to China.

In an especially odd act of sycophantism, Mr. Duterte also told the Chinese leadership that he would be happy to split any oil that the Philippines extracts from a disputed region with Beijing.

Taken together, these moves show that even if Duterte is unable to accomplish a full “separation” from America, he longs to dramatically reduce Manila’s dependence on America in order to build a closer relationship with China.

Some of this desire may be due to a combination of fear of and fondness for China. But it is mainly motivated by an understanding that the United States is in decline and no longer a reliable ally and that China will soon be the region’s hegemon. And the Philippines is not the only nation in the region preparing to realign itself in response to this shift.

In a strategy report released in December 2016, Ross Babbage, senior fellow at U.S. think tank Center for Strategic and Budgetary Assessments, explained: “In effect, Beijing is pressuring regional countries into an arrangement that mirrors the contract struck with its own people: economic benefits in exchange for political compliance, with a big stick lurking in the background threatening retaliation for aberrant behavior. … Significant damage is being done to U.S. and allied credibility. In the absence of major changes in allied policy, much of Southeast Asia will likely shift into Beijing’s orbit.”

The Philippines and other Asian nations see China’s “big stick” and understand that the U.S. can no longer be relied upon to shield them from it. So they are making a calculated realignment.

It is possible that President Donald Trump’s efforts to rebuild U.S. leadership in the region will reverse this realignment for some countries. He could demonstrate U.S. military superiority in a fashion that discourages further Chinese adventurism and wins back the confidence of U.S. allies. But such efforts would only temporarily slow the shifting power balance.

The Trumpet takes a keen interest in this shift because it is furthering three prophetically significant trends: The deterioration of U.S. power, the coalescing of “the kings of the east,” and the rise of China.

Herbert W. Armstrong foretold the decline of America for several decades. Writing in the October 1961 issue of the Plain Truth, just after the U.S.’s failed invasion of Cuba, he ascribed the blame not to the U.S. military, or even the Kennedy administration, but to the people of America: “Unless or until the United States as a whole repents and returns to what has become a hollow slogan on its dollars: ‘In God we trust,’ the United States of America has won its last war! [T]he God America has deserted gave it its most humiliating defeat! What does the Cuban debacle mean? It means, Mr. and Mrs. United States, that the handwriting is on your wall!”

Mr. Armstrong understood that America’s power was deteriorating and that the country was headed for collapse. He made these statements with confidence because he founded them on biblical prophecy. The Bible includes a clear forecast for the descendants of Israel, which include America. Leviticus 26:19 records God warning that if these people reject His law, He will “break the pride” of their power.

In the decades since Mr. Armstrong wrote those prescient words, the people of America have intensified their rejection of God’s law and their hatred of it. The country has inserted itself into dozens of military conflicts, and each halfhearted campaign has sapped a bit more of the nation’s pride in its power.

Many Americans today may not believe that the country’s will to use its power is breaking, but the U.S.’s allies in Asia, such as the Philippines, can see it plainly. As a result, some of these Asian states are preparing to realign with China. This too was prophesied.

Revelation 9:16 speaks of an Asian army comprised of 200 million soldiers. Revelation 16:12 labels this “the kings of the east.” And Ezekiel 38 reveals more details about this bloc, including the fact that it will be headed by Russia, with China in a position of junior leadership.

The Asian states preparing to align with China today are laying the groundwork for “the kings of the east” prophecy to come to pass. Some current leaders such as Duterte may be among the “kings” that lead their nations to join this Asian confederacy.

The third trend being fulfilled in modern developments is what the Bible terms “the times of the Gentiles.” Jesus Christ Himself used this term, as recorded in Luke 21:24. And the context shows that these “times” will occur after a shift in global power takes place, pushing power away from America and Britain and toward two primary power blocs: one led by Germany and the other, the kings of the east. For this prophesied era to occur, there has to first be a shift of power toward China, such as what is occurring with the Philippines’ capitulation to Beijing.

Bible prophecies show that these trends will culminate in an epoch of unprecedented world war and suffering (Matthew 24:21-22). Understanding that this world war is near makes it chilling to watch the decline of America and the rise of a bloc determined to undermine the global order. But these chilling trends are intimately tied to a future that is more hope-filled and radiant than we can imagine. The Bible makes plain that immediately after all the destruction, the most sublime event in the history of the universe will take place: the return of Jesus Christ.

The trends underway in Asia right now show that that return is “at the door.” Christ will soon bring in an era of peace and prosperity for the peoples of China, the Philippines, the U.S. and all nations! During this future age, no one will have to fear the outbreak of war—nuclear or otherwise—anymore. As Isaiah 2:4 says: “[N]ation shall not lift up sword against nation, neither shall they learn war any more.” Anyone who labors to comprehend that radiant future of harmony can be filled with hope. To begin that labor, order your free copy of Russia and China in Prophecy.