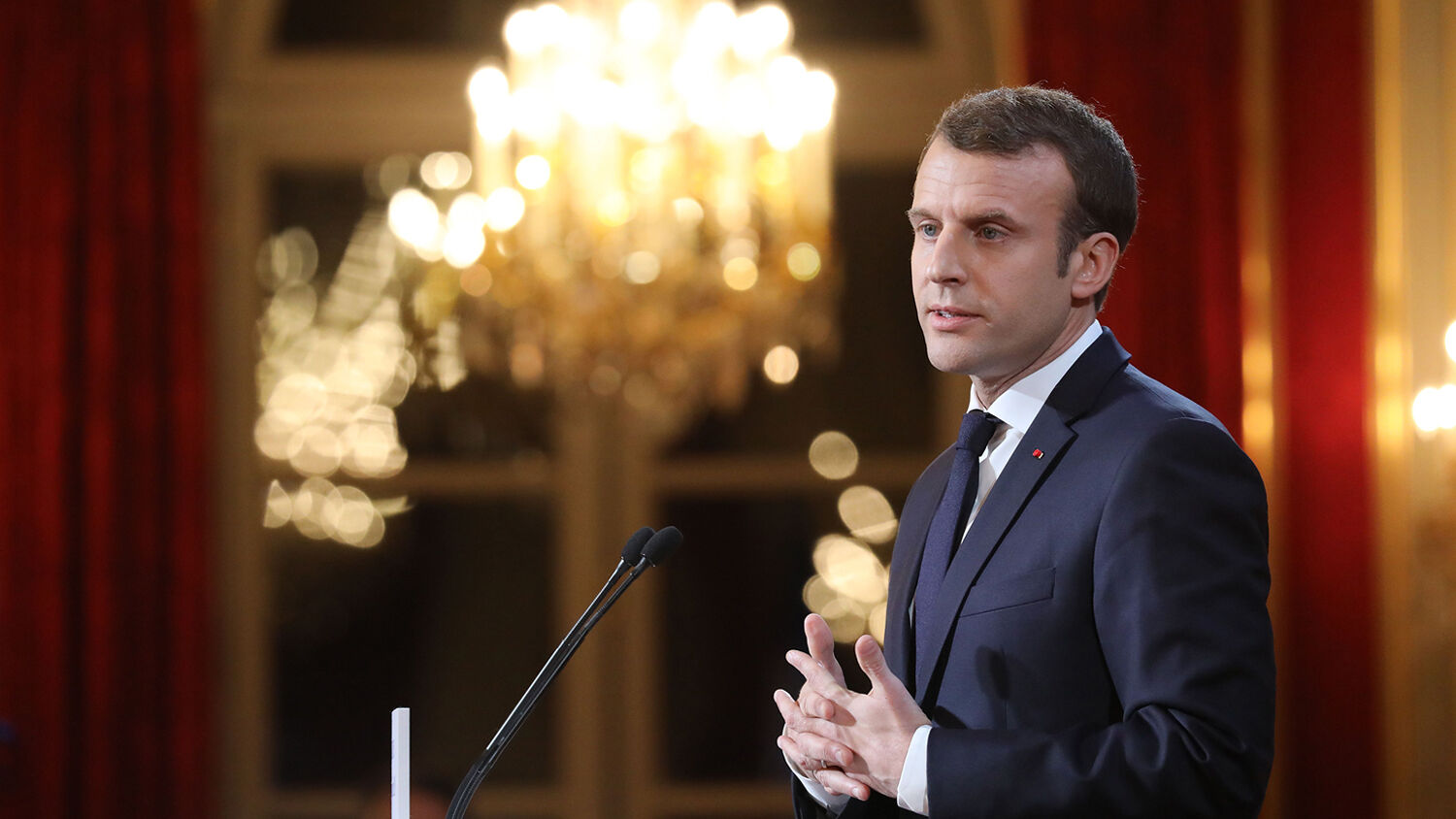 French President Emmanuel Macron delivers his New Year’s speech to the press at the Elysee Palace in Paris, on Jan. 3, 2018.
LUDOVIC MARIN/AFP via Getty Images

The ‘strained’ link between church and state is slowly being restored in France.

Secularism is a prized constitutional principle in France. French President Emmanuel Macron characterized it this way at a New Year’s reception in January 2018 before a crowd that included senior members of the clergy: “This French secularism, which sometimes surprises our neighbors, is a powerful cement in a country torn by so many wars of religion.” But coming to France in the near future is a reduction of secularism, an expansion of religion—and more war. Though subtle at the moment, signs of this change are already emerging.

As the coronavirus crisis unfolded earlier this year, Macron invited religious representatives to share their thoughts. The president of the Conference of Bishops of France, Bishop of Reims Mgr Éric de Moulins-Beaufort, responded with a 60-page letter to the president on June 3 stating that church and state should work closely together in the interest of the common good. Moulins-Beaufort leads bishops that represent millions of French Catholics.

France’s church-state relationship has historically been marked by ups and downs, power struggles, wars and the French Revolution. Macron knows this history well. Yet even he pleaded for the restoration of the “strained” link between church and state at France’s annual bishops’ conference in April 2018.

With Moulins-Beaufort’s letter, both the church and state leaders in France are now vowing to restore this cooperation.

In August 2019, Macron received Moulins-Beaufort for an 90-minute-long “courtesy visit,” as La Croix reported at the time. The subject of the meeting revolved around the reconstruction of Notre Dame, reception of migrants, relations between cults and the state, and revisions of bioethics laws. Macron is working closely with the Roman Catholic Church and seeks its input regularly on all these issues.

These are small steps thus far. But it would appear Macron wants to revive this church-state relationship in France. Yet this relationship has a long, bloody history.

Roman Catholicism became France’s state religion during the reign of King Clovis i (a.d. 511). Cooperation between the French monarchy and the Catholic Church peaked under Charlemagne when the pope crowned him emperor (a.d. 800).

Macron honored this history when he signed a new Franco-German treaty of friendship with German Chancellor Angela Merkel on Jan. 22, 2019, in Aachen, the city from which Charlemagne reigned and in which he is buried.

What Charlemagne established had a lasting impact on France. The church not only guided the religion of the French, but also became the nation’s largest landowner, the overseer of hospitals, the guide of its educational system, and the approver or denouncer of scientific research. France’s nobility and clergy worked to secure one another’s power, reputation and wealth.

The Church of St. Anne was built during the time of these crusades.

On January 22, Macron visited Jerusalem to hold political talks and attend the commemoration of the 75th anniversary of the liberation of Auschwitz. During his trip, he visited the Church of St. Anne in Jerusalem’s Muslim Quarter in the Old City. “Macron Begins Jerusalem Visit by Underscoring France’s History in Region” was the Jerusalem Post headline at the time. The church building was given to France by the Ottoman Empire in 1856. France claims the church as one of four sites it owns in Jerusalem.

St. Anne is called a Crusader Church. “Crusader Jerusalem is seen at its best in the simple strength of St. Anne’s (a.d. 1138),” Jerome Murphy-O’Connor writes in his book The Holy Land: An Oxford Archaeological Guide From Earliest Times to 1700.

Of all Macron’s political goals in the region, he deemed underscoring this history most important. So much so, that he furiously took a controversial stance to defend France’s claims.

‘Go outside,’ French President Macron demanded from Israeli security men at the Church of St. Anne in Jerusalem. The church which was gifted by the Ottomans to Napoleon III in 1856 https://t.co/F7CXHBZ2Wp pic.twitter.com/RFskn1kjC9

Macron shouted at an Israeli security officer, “Everybody knows the rules. … I don’t like what you did in front of me. Go out—outside, please!” He emphasized that the rules have been in place “for centuries” and they “will not change with me.”

Macron specifically planned this visit and was likely prepared for a possible confrontation with security personnel. He was deliberately resurrecting France’s history of cooperating with the Catholic Church in the Middle East.

Rather than memorializing the deaths of millions of Jews, he honored those who persecuted and killed Jews anciently, the crusaders.

France’s church-state cooperation reached its peak of brutality during the Protestant Reformation. As Protestantism swept through Europe, heretics were brutally tortured until they denied their faith or lost their lives. But the reformers grew stronger and formed military alliances to fight back. The religious conflict culminated in the Thirty Years’ War (1618–1648). French King Louis xiv resumed the religious wars in 1685.

France’s close relationship with the Catholic Church became a major factor in the French Revolution. “These various factors—the mutual dependency between church and nobility, the exclusion and persecution of religious minorities, and the monopoly of the church over various institutions—fueled the intense animosity toward the Catholic Church during the French Revolution (1789) and its aftermath,” noted the Religious Literacy Project of the Harvard Divinity School.

During the French Revolution, the church was stripped of its possessions, rights and privileges.

What if Macron restores this cooperation? Such a move isn’t without historical precedent.

Under the Concordat of 1801, Napoleon unofficially reestablished the Catholic Church as the French church. Almost a thousand years after Charlemagne, Napoleon famously crowned himself emperor in Notre Dame in 1804, claiming supremacy over the church. Yet this church-state unity didn’t last long. In 1905, the Law on the Separation of Church and State cut ties between the Catholic Church and the French government.

Notre Dame was a landmark not just for Napoleon, but also for Macron. After a major fire burned the cathedral’s roof in April 2019, Macron said: “Notre Dame is our history, our literature, our imagination. The place of all our great events, our epidemics, our wars, our liberations, the epicenter of our lives. We built this cathedral over centuries, raising it up and improving it, and I now state solemnly that we will, all of us together, reconstruct it. This is undoubtedly part of the French destiny.”

Macron rallied France behind its Christian heritage, stirring the nation to make that same heritage its future destiny.

Macron even claimed it is his political responsibility to further the church’s reconstruction. The cathedral symbolized “relations between religion and political power,” he said, adding that he believed the French state should “take charge of its reconstruction.”

Macron even engaged in a debate how the future of the cathedral should look. Many clerics believed his involvement went too far, but he wasn’t deterred by their criticism.

Even though cooperation between church and state officially ended in 1905, it revived during the two world wars. “Many Catholic leaders and institutions had been vocally anti-Semitic in the decades leading up to World War ii and many—though not all—supported the Vichy Regime, which collaborated with the Nazi government and was culpable in the deaths of roughly 75,000 French Jews,” wrote the Harvard Divinity School.

Just four days before the World War i commemorations, President Macron made other provocative comments we need to think about. Touring a battlefield of the Great War, Macron praised Marshal Philippe Pétain, who was to be honored at a ceremony at Napoleon’s Tomb that weekend. Pétain was a French general during World War i. But he was more than that: In June 1940, he was appointed prime minister of France and immediately surrendered France to Adolf Hitler. Between 1940 and 1944, Pétain collaborated with Hitler while presiding over Vichy France. British historian Andrew Roberts wrote that Pétain “participated enthusiastically in sending non-French Jews to the death camps—principally Auschwitz—in a way that the Germans simply did not have the manpower or local knowledge to achieve.”

“It’s right that we honour the marshals who led France to victory [in World War i],” Macron said, calling Pétain “a great soldier,” even though he had made “disastrous choices” during the Nazi occupation of France.

Should a man with such a history really be honored? As Mr. Flurry explained in his article, Macron may have made these comments because he too is cooperating with Germany today on a dangerous level. The Bible warns what happens when such cooperation occurs.

The Bible reveals not only that a final resurrection of the Holy Roman Empire will occur, but also that it will again attack the English-speaking peoples.

While visiting the World War i battlefield of Verdun on Nov. 6, 2018, Macron called for a true European army, saying: “We have to protect ourselves with respect to China, Russia and even the United States of America.”

A few years ago, it would have been inconceivable to consider a conflict between the European continent and Britain and America. But not in the era of Brexit and Donald Trump’s presidency. The Bible is dogmatic that this conflict is coming, and it also predicts that the Catholic Church will play a major role in it.

The European Union is morphing more and more into an empire with its own army and leadership. We are also seeing a push to increasingly involve the Catholic Church. In a March 2019 letter to European citizens, Macron called for a conference for Europe that would “engage with citizens’ panels and hear academics, business and labor representatives, and religious and spiritual leaders” (emphasis added).

The Bible prophesies that 10 kings will rise in Europe today (Revelation 17:12-13). “This prophecy was written nearly 2,000 years ago,” wrote Mr. Flurry, “and these ‘ten kings’ are rising in Europe today!”

These kings are allying themselves with the Catholic Church. The Bible reveals that this cooperation will lead to a declaration of war against radical Islam (Daniel 11:40). This united European superpower will seek to dominate Jerusalem (verse 45). (You can find proof of these events in our booklet The King of the South.) This Holy Roman Empire will also reintroduce enforced Sunday worship in Europe (Revelation 13).

The refugee crisis has brought the fulfillment of this prophesied clash between radical Islam and Europe much closer. France already declared war against the Islamic State; the Bible reveals that a greater conflict is yet looming.

The Holy Roman Empire has historically often enforced mandatory Sunday worship. The Bible reveals this history will repeat itself (request a free copy of Who or What Is the Prophetic Beast? to learn more). We have proclaimed this prophecy for years, and today Moulins-Beaufort and other religious representatives are calling for “a real Sunday rest.” It remains to be seen if Macron will answer the church’s plea, but given his previous cooperation it wouldn’t be surprising.

To cooperate, church and state often have to make unwanted compromises, which lead to conflicts and power struggles. The Bible also prophesies of this conflict and where it will lead: “And the ten horns which thou sawest upon the beast, these shall hate the whore, and shall make her desolate and naked, and shall eat her flesh, and burn her with fire” (Revelation 17:16).

This graphic prophecy predicts something that has never happened historically: The state in Europe will turn against the church.

Already France’s relationship with the Catholic Church is shifting. Soon we will see history repeat itself. Once more European leaders are heading into an alliance with the Roman Catholic Church.

In the era of President Donald Trump, Brexit and the recent coronavirus outbreak, France’s transformation could be easily overlooked. But the role of religion in Europe is something we must pay attention to.