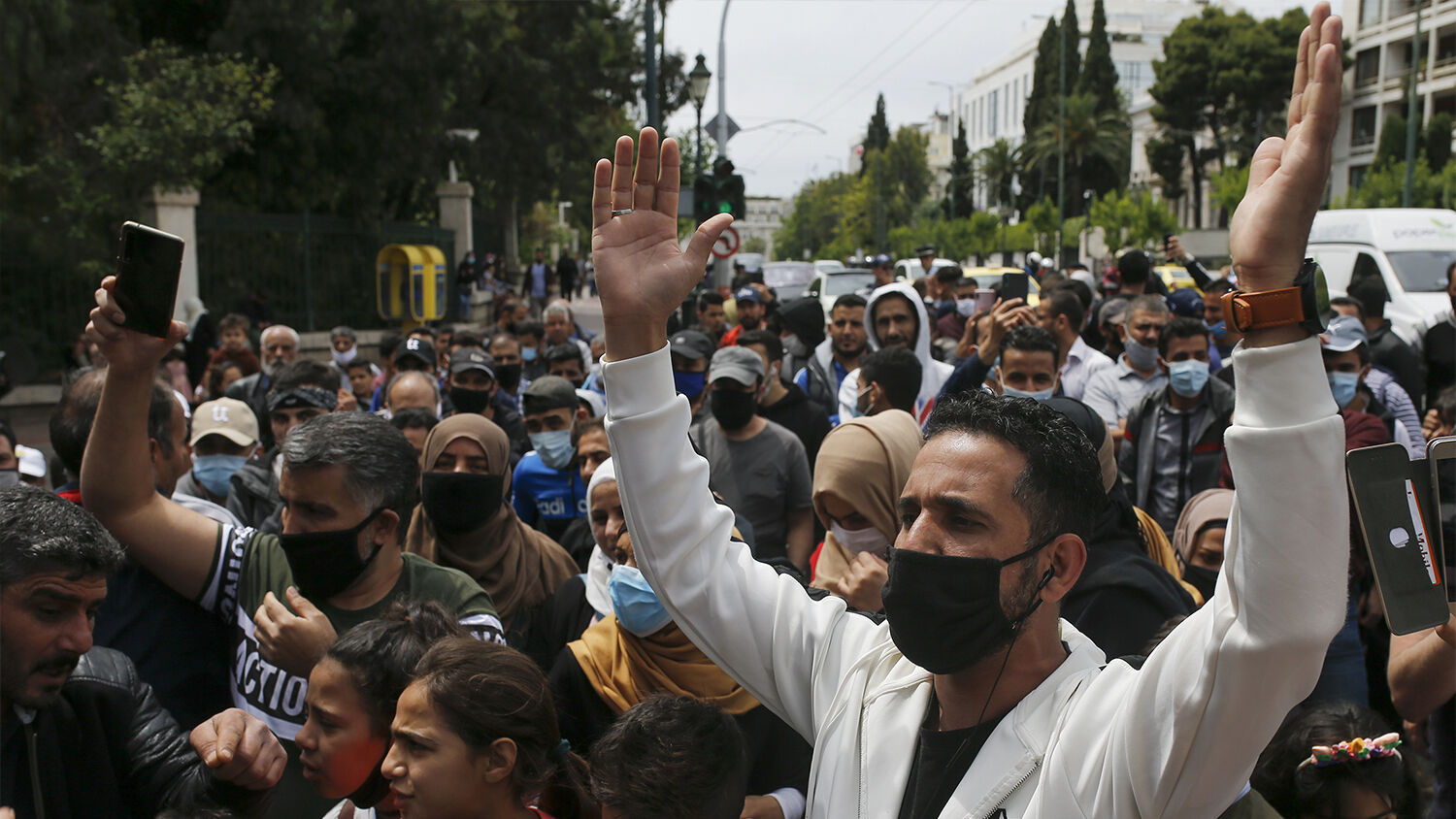 Approximately 200 asylum-seekers gather for a demonstration to demand a place to stay and the extension of the accommodation program, as Greek police officers stand guard, outside EU offices in Athens, Greece, on May 27.

Where is the toughening attitude toward migrants leading?

European countries are imposing stricter anti-immigration measures, with several governments using the coronavirus pandemic to justify a tougher stance. As divisions deepen between European Union nations on this and other key issues, the bloc appears more divided than ever before—but there are signs that unprecedented unity is on the horizon.

Greek police have reportedly robbed and beaten some migrants on the way to deporting them. Others report on police luring unsuspecting migrants to the border under false promises of new immigration papers. All were ultimately forced across the Evros river into Turkey.

Greek Prime Minister Kyriakos Mitsotakis announced at the beginning of the year that Greece would be clamping down on illegal entry and further protecting the border. This has been extended to include sweeps in the mainland, ejecting some who have been in the country for years.

In forcefully deporting people, Greece has gone a step further from the previous action of making entry more difficult. Instead of simply stopping the trend, it is now working to reverse it.

According to the Border Violence Monitoring Network, at least 250 asylum seekers have been violently expelled from Greece since March. It believes that the number is actually far higher, as most migrants who have been returned to Turkey don’t speak out.

Coronavirus has given Europe a good pretext to keep migrants out by declaring their countries “unsafe” for the migrants themselves. While simply being anti-migrant can be perceived as far right, this approach allows countries to shield themselves from allegations of inhumane policies. And so, in the alleged interest of not endangering migrants, Italy, after its much-publicized struggle with coronavirus, announced that its harbors are no longer “safe places” for migrants to dock.

Malta made a similar announcement in April, saying that it is unable to “guarantee the rescue of prohibited immigrants on board of any ships” neither is it able to “ensure the availability of a ‘safe place’ on the Maltese territory to any persons rescued at sea.” Beyond just sending migrant boats away after they arrive, Malta has been actively working to ensure that they don’t even have the opportunity to dock. According to the New York Times, in April, Malta dispatched a private fleet of vessels to intercept migrants at sea, which forcibly returned them to war-torn Libya.

Hungary is also toughening its stance on migration. Under the strong-armed rule of Viktor Orbán, Hungary already had very stringent immigration laws. In 2015, he ordered the complete sealing of the southern border, locking out hundreds of thousands of Middle Eastern migrants and holding many in prison-like conditions in heavily guarded transit-zones at the Hungary-Serbia border. Decried for violating human rights, Hungary has been forced by the EU to release the detained migrants. But now it has vowed to make it even harder for migrants to enter the country.

Zoltan Kovacs, a spokesperson for the Hungarian government, said that future migrants would no longer be able to submit asylum applications from within Hungary. So “potential asylum seekers are a lot worse off,” as now “[t]hey can expect virtually no shelter from Hungary amid their persecution.”

Despite the expectations and calls of an international crisis, such as coronavirus, to bring about global solidarity, Europe’s stance on migrants has not changed. In fact, it appears to be hardening. Even France has been doing all it can to keep migrants out of its country, going as far as escorting them from French to British waters so they would be the United Kingdom’s problem.

I just witnessed the French Navy escorting illegal migrants into British waters, despite the money we are paying them.

They even tried to prevent us from filming the handover, as you can see in the video.

This is an outrage and a scandal. Time for the government to get a grip. pic.twitter.com/hT8ctbZag5

Europe doesn’t want illegal migrants, so its stance on immigration is getting tougher and its attitude harder. It is no coincidence that the migrants are primarily from the Middle East, which has been hit hard by coronavirus and the resultant food crisis.

As the impact from the pandemic worsens, immigration from the Middle East and North Africa can only be expected to swell. Libyan Prime Minister Hassan Diab warned as much, saying that a food crisis “may spark a new migration flow to Europe and further destabilize the region.”

Today, however, there is widespread disapproval with how the EU has handled the migrant issue, with at least 65 percent of Germans, French, Italians and Greeks disapproving of its handling. Before, the vast majority of Europe supported migration. But now, an emerging, core group is significantly colder toward migrants.

Alexandra Stiglmayer, senior analyst at the European Stability Initiative, believes that the EU “as a whole will continue to struggle to respond coherently to the migration and asylum challenges. The views among its 27 member states are simply too divergent.”

James Carafano, vice president of the Kathryn and Shelby Cullom Davis Institute, says several European countries are “no longer interested” in opening their borders to migrants. The issue has “created a deep divide in the European polity” and the possibility of Europe allowing a wave of migrants onto the Continent “appears less than low.”

The EU is caught between a rock and a hard place. While it has for so long advocated human rights and equal treatment, it also has an obligation to protect its borders from the predominantly Middle Eastern migrants. This has manifested itself in an increasingly cold shoulder from Europe toward migrants, as far-right policies have entered the mainstream.

While many experts have commented on how divided and fractured Europe’s opinions are, and how split it is on migration, Bible prophecy states that Europe is, in fact, on the verge of uniting more than ever before. This even closer union will be held together by the Roman Catholic Church.

Mr. Flurry further explained in “France Is Resurrecting the Holy Roman Empire,” “This prophecy shows that the European Union, currently at 27 nations, will be pared down to 10 kings. Britain has already withdrawn from the EU. Others will follow or be kicked out” (Revelation 17:12-13). This is how the division on the migrant issue will be solved.

Emmanuel Macron was not born Catholic; he chose Roman Catholic baptism at age 12 and attended a Jesuit secondary school. As an adult, he is said to have turned increasingly secular. But in 2018 at the annual conference of the bishops of France, he promised to restore the “strained” link between church and state, and has since worked to fulfill his promise. …

Though he campaigned as a pro-immigration centrist, he is now pushing one of France’s most right-wing agendas. In November, he announced new immigration measures and has grown increasingly critical of Islamic ideology. In January he announced his plan to “Recapture the Republic,” a plan to fight growing Islamism in the country.

This is what is happening across Europe in microcosm. The predominantly Islamic and Middle Eastern migrants are sweeping into Europe with their increasingly militant actions. But Europe’s Catholic heritage is being revived, and along with it, its historically fraught and violent clashes with radical Islam.

Mr. Flurry wrote that while “this church-state union has ruled Europe for centuries” all its “previous inquisitions, religious wars, crusades and the Holocaust have been a mere foreshadow” of what is about to happen next. Catholic Europe and Islam are on course for a clash of civilizations.

As divided as Europe is right now, the Bible prophesies that it will be united through the Catholic faith and rise as one in opposition to Islam as it has done in the past. This is what is at the core of the migrant crisis and why Europeans are hardening their attitudes toward migrants now.

These ongoing events with migration are precipitating the prophesied closer union between European nations and their face-off against radical Islam. It is all in line with what the Bible prophesies. And although countries are finally beginning to open up again, and coronavirus lockdowns are starting to lift, the pandemic has revealed underlying hostilities and attitudes that will outlast the disease itself.

To fully understand the highly detailed Bible prophecies about Europe and its coming confrontation with radical Islam, read Mr. Flurry’s article “Coronavirus and the Holy Roman Empire” and request your free copy of The Holy Roman Empire in Prophecy.