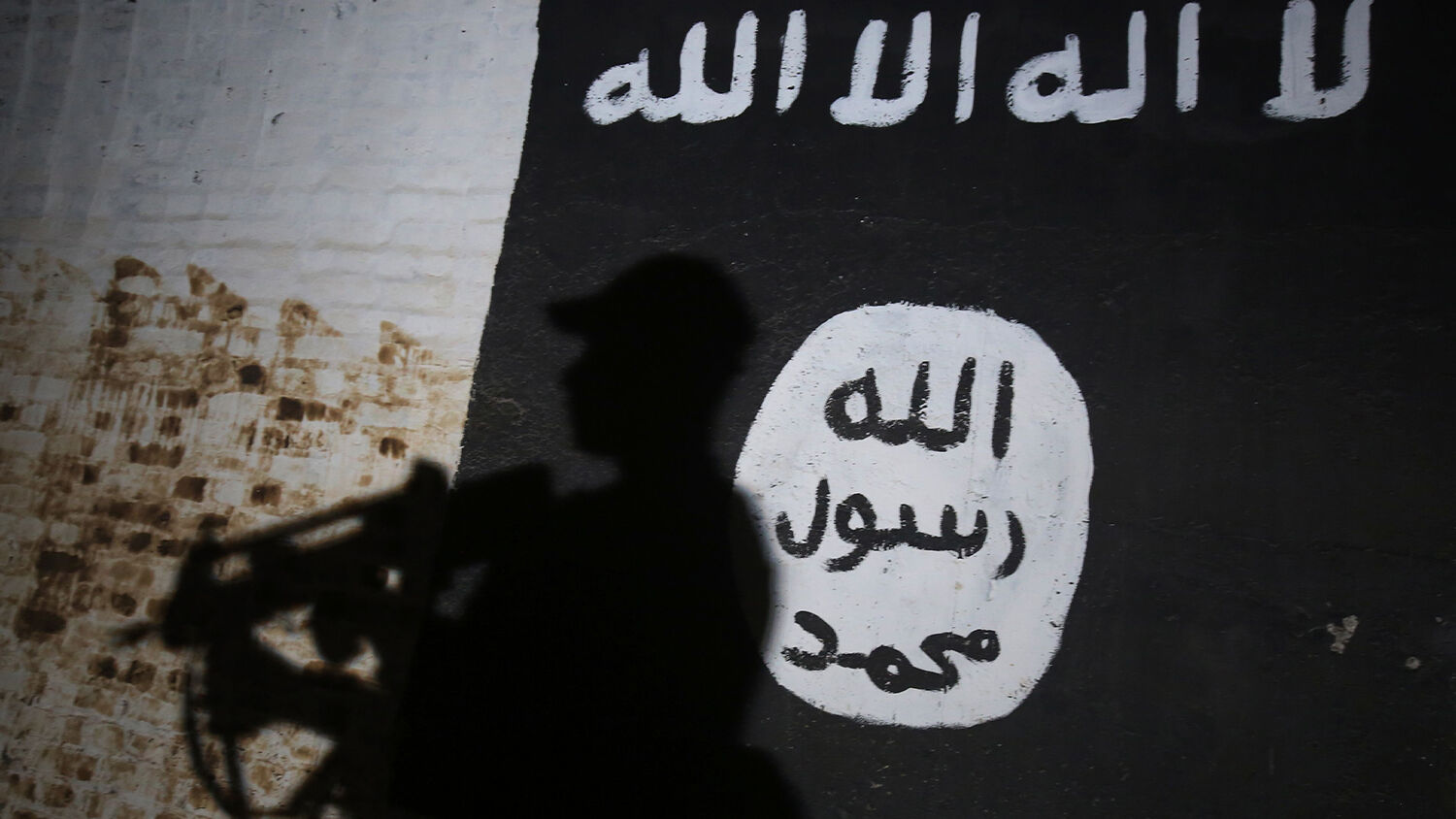 A member of the Iraqi Forces walks past a mural bearing the logo of the Islamic State.
AHMAD AL-RUBAYE/AFP via Getty Images

A surge of Islamic State activity in Iraq has occurred in recent months as the terrorist group seeks to take advantage of the protests, coronavirus crisis, and United States troop withdrawals.

The recent string of attacks occurred primarily in northern Iraq. Between March 17 and 21, Islamic State insurgents quadrupled their average number of mortar and rocket attacks, according to Politico, by firing 15 mortar rounds in the Khanaqin district of northeastern Iraq.

According to Al-Monitor, an Islamic State sniper shot and killed an Iraqi policeman on April 12. The next day, the Islamic State ambushed Iraqi Security Forces and militiamen in the Kirkuk province in northern Iraq.

On April 19, Islamic State militants injured and killed members of the Iraqi Security Forces in the Dibis province and the city of Rashad, both in northern Iraq. On April 20, an unknown terrorist group, possibly the Islamic State, killed three Iraqi soldiers in the Diyala province just northeast of Baghdad.

The majority of Islamic State terrorist activity has occurred in northern Iraq, where the Shia Iraqi Security Forces put far less attention. Instead, the security forces have been focused on quelling protests, keeping Iraqis quarantined in their homes, and harassing U.S. military bases.

When the coronavirus crisis began spreading from Iran into Iraq, many protesters decided to stay at home in fear of the new pandemic. Since then, the Iraqi Security Forces have focused on keeping everyone under quarantine, thus temporarily quelling the protests.

Meanwhile, the U.S. has decided to reduce its number of bases in Iraq and to withdraw some of its troops from the country. Six former U.S. bases around Iraq were handed over to the Iraqi Security Forces as troops were consolidated to a few bases in Baghdad and western Iraq.

The Islamic State has taken advantage of the opportunity presented by this internal conflict and reduced U.S. presence by increasing its attacks in northern Iraq.

“This is how the [Islamic State] caliphate knits itself back together, one village at a time,” Politico wrote. “This is exactly how it happened in 2012–2014, after the previous U.S. withdrawal.”

Militias and the Islamic State

In an interview on the Debbie Aldrich Show, Michael Pregent, an Iraq expert and senior analyst at the Hudson Institute, said, “Iraq experts, Iraqis inside Iraq, said, the Islamic State looks just like it did in 2013” and that it is “reconstituting” into a strong fighting force.

A local Iraqi mayor, Mahma Khalil, blames the return of the Islamic State on “the failure of the security forces to play their role in maintaining security. These factors lead the Islamic State to exploit the situation and reorganize its ranks.”

This raises the question: Why have the security forces and Shiite militias allowed the Islamic State to begin rebuilding its caliphate?

During the Iraqi civil war, these Shiite militias adopted the objective of eliminating the Islamic State. In doing so, they were seen as the defenders of Iraq, protecting the country from terrorists. The Islamic Republic of Iran saw its opportunity to finally conquer Iraq. It began forming, training, leading and funding many of these Shiite militias under the facade of defeating the Islamic State.

After being victorious over the Islamic State, the militias became national heroes. Within a few years they merged with the Iraqi Security Forces and established a political party, the Fatah Alliance, in the Iraqi parliament. Fearing their rise in power, many Iraqi nationalists quickly began calling for the militias to disband. In order to keep its legitimacy, the Shiite militias and security forces slowly reduced its attacks against the Islamic State. This gave the terrorist organization room to reconstitute and reorganize. Now, with the return of the Islamic State and a sharp rise in the number of attacks, suddenly the militias are once again a necessity to Iraq’s security.

If the Shiite militias were not busy pursuing the Islamic State, what were they doing?

“The important message Iran and the pmu are sending through their operations on the borders with Syria, Jordan and Saudi Arabia is that they will run the border and not the Iraqi Army or other Iraqi units,” Seth Frantzman wrote for the Jerusalem Post. “This enables them to help Iran transfer munitions to Syria via the Al-Qaim crossing to the Iranian base called Imam Ali near Al Bukamal.”

This is also the region of Iraq where the U.S. has consolidated its troops. While Islamic State attacks are primarily occurring in the north, the Shiite militias are focusing their attention west, where it can prepare to drive out the U.S. and turn its attention toward Israel.

Pregent continued, “And as they move west under the guise of fighting the Islamic State, they are moving west to ensure that what is left of Qassem Suleimani’s landbridge is still operational, so they can continue to destabilize Syria and the Levant, and, ultimately, threaten Israel. That’s the goal.”

The real goal of the Shiite militias is not to protect Iraq from the Islamic State, but rather to do Iran’s bidding by driving the United States out of Iraq so it can ultimately threaten Israel.

This is a trend the Trumpet has been warning about since the 1990s, when editor in chief Gerald Flurry wrote about Iran taking over Iraq and leading a group of radical Islamic nations.

In December 1994—while Saddam Hussein was still in power—Mr. Flurry asked, “Is Iraq About to Fall to Iran?” In the February 1995 Trumpet, he wrote, “The most precious jewel of Iran’s plan is to conquer Jerusalem. This would then galvanize the Islamic world behind Iran” (emphasis added).

A popular slogan during the Iran-Iraq War was “The path to Jerusalem runs through Karbala,” a Shiite holy city just south of Baghdad. In “Iraq Is Conquered—On to Jerusalem,” Trumpet Jerusalem correspondent Brent Nagtegaal wrote, “This was the cause that burned in Iranian hearts as they waged war on Iraq for eight long years during the 1980s. Even after something like a million souls perished and the war ended inconclusively, that ambition did not die: Iraq, then Jerusalem. It has taken decades, but recent events show Iran is finally realizing the first part of this long-held mission—and proceeding to the next.”

The Islamic Republic’s undying ambition is to destroy the Jewish State of Israel and conquer Jerusalem for itself. Iran has always seen Iraq as the first step toward achieving that goal. As security forces surround the remaining U.S. forces in Iraq and solidify Iran’s control over the Iraqi-Syrian border, allowing it to transport military shipments through Iraq all the way across into Syria and almost into Lebanon, Iran is pushing closer and closer to its ultimate objective: Jerusalem.

In the July 1998 Trumpet, Mr. Flurry wrote, “The stage is being set for an Islamic group of nations to be led by Iran as the prophesied king of the south …. Iran has a foreign policy with a lot of ‘push.’”

Mr. Flurry was able to make this incredibly accurate prediction in the 1990s because he based his understanding on Bible prophecy. Daniel 11:40 says, “And at the time of the end shall the king of the south push at him: and the king of the north shall come against him like a whirlwind, with chariots, and with horsemen, and with many ships; and he shall enter into the countries, and shall overflow and pass over.”

This prophecy in Daniel 11:40 is for “the time of the end,” the days we are living in right now, when the world is on the edge of economic, moral and existential collapse. A decade of worldwide protest has been followed by strict coronavirus lockdown, in which governments have seized near total power—not only in America, Britain and Europe but around the world. Iran, through the Shiite militias, is tightening its grip on Iraq.

The return of the Islamic State and its attacks against the Iraqi Security Forces and Shiite militiamen have given Iran’s proxies in Iraq legitimacy and provided them with the rationale for pursuing the regime’s goal to threaten Israel. As a result, the Islamic State has simply become an instrument of Iran’s conquest.

For more information, please read “Iran Is Conquered—On to Jerusalem.”