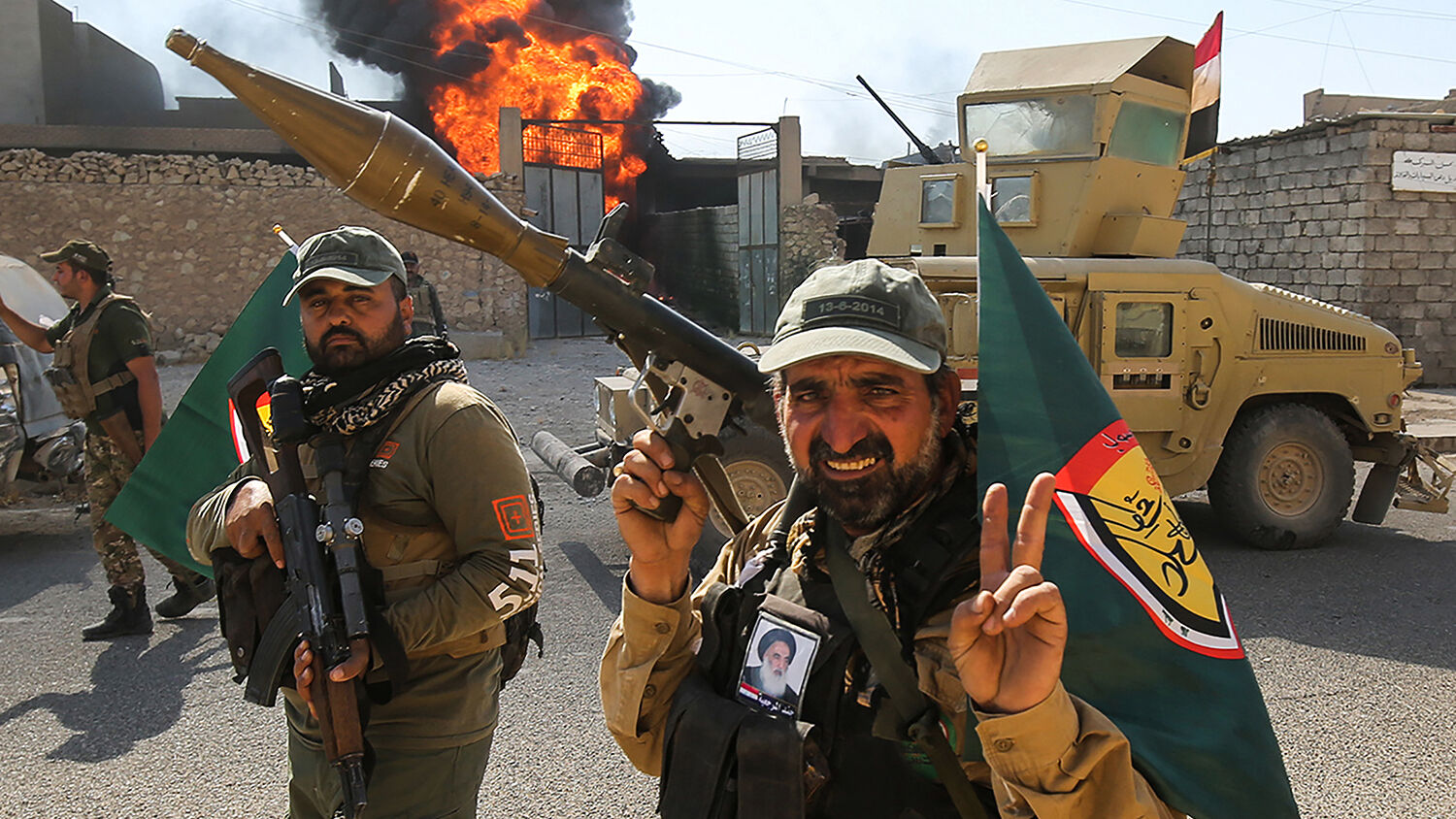 Iraqi Prime Minister Adel Abdul-Mahdi issued a decree on July 1 ordering the Iranian-backed Shiite militias to fully integrate with the Iraqi Armed Forces before the end of the month. The decree could once again forge Iraq into a powerful state, this time composed of iron-willed Iranian terrorists.

The decree stated that “all Popular Mobilization Units are to operate as an indivisible part of the armed forces and be subject to the same regulations.” Although the Popular Mobilization Unit militiamen were already under the Iraqi government’s payroll, the new decree solidifies their transition into the Iraqi military. It also forces the militias to no longer be a separate organization, but rather to join as new battalions in the national military.

PM @AdilAbdAlMahdi: We have taken measures so that Al-Hashd Al-Shaabi forces are subject to the same regulations that apply to the Iraqi Armed Forces. pic.twitter.com/ADuV2KlOC9

Several news agencies believe this decree will restrict the power of the Iranian-backed militias. In the May 2018 general elections, the political wings of the Popular Mobilization Units formed a coalition, the Fatah Alliance, which won the second-largest number of seats in parliament. To be “subject to the same regulations,” these Shiite militiamen will be forced to choose between the parliament and the military. While it may weaken the militias’ political power, militia leaders realize the perks of joining the Iraqi Armed Forces far surpass the sacrifice.

Several powerful militias have already welcomed Mahdi’s decree. One of the most powerful militias, Kataib Hezbollah, declared that its forces within Iraq would implement the decree. According to its website, Kataib Hezbollah’s overarching goal is to establish an Islamic government, with Iran as the model. The militia looks to Iranian Supreme Leader Ayatollah Sayyid Ali Khamenei as its spiritual guide.

Since Kataib Hezbollah is a United States-designated Foreign Terrorist Organization, the Iraqi military will now be partly composed of terrorists. Kataib is accused of conducting the May 14 drone attack on the Saudi Aramco East-West pipeline, temporarily halting oil flow.

The group’s leader, Abu Mahdi al-Muhandis, has close ties to Iran and is Quds Force Cmdr. Qassem Suleimani’s lieutenant. As the head of the Popular Mobilization Units, Muhandis also holds an official position in the Iraqi government. His move to join the Iraqi military will likely see many other militias follow.

Qais Khazali, the leader of Asa’ib Ahl al-Haq, Iraq’s third-largest Shiite militia, also welcomed the move. Asa’ib ahl al-Haq was initially equipped, funded and trained by Iran’s Islamic Revolutionary Guard Corps Quds Force. In 2014, it received up to $2 million a month in funding. Created to battle United States military presence in Iraq, the militia claimed 6,000 attacks against U.S. and coalition forces from 2006 to 2011. Now the group will be a part of the Iraqi military. Khazali said on Twitter that the integration of the two militaries is “a step in the right direction.”

Populist Iraqi Shiite cleric Muqtada Sadr, head of the Iraqi parliament’s largest coalition, also welcomed the new decree, stating that his own militia, the Peace Brigades, would also integrate. Sadr tweeted that the decree was an important “first step” toward forging a strong state.

Iraq fields one of the more dysfunctional militaries in the Middle East. Its generals are promoted based on political loyalties rather than earned prestige. Politicization in the armed forces has also exacerbated corruption. Shiite officers are preferred to their Sunni, Kurdish and Christian counterparts. The ineffectiveness of Iraq’s Armed Forces presents an ideal scenario for the newly integrated pro-Iran Shiite militia leaders, who report to Iran, to hold top positions in the Iraqi government—giving Iran significant control over Iraqi policy.

Michael Pregent, an Iraq expert from the Hudson Institute, wrote that “the Iraqi government either cannot or will not remove the Iranian-backed militias from its territory, nor will it prevent them from targeting U.S. allies.” The Iraqi government does not have the power to battle the militias, so it has decided to forge an alliance with them. The outcome will see both parties emerge with a stronger military.

Opinion: Iran is opening a new regional front against US interests through its militias in Iraq. The US must act because the Iraqi government won’t, writes Michael Pregent.https://t.co/PdysREPvBD

With the addition of approximately 140,000 militiamen from the Popular Mobilization Units into the Iraqi Armed Forces, Iraq’s military will see a dramatic power spike. Not since the days under late Iraqi President Saddam Hussein has the Iraqi military been so powerful. Yet with the integration of the militiamen, it will be led in part by strong-willed Iranian leadership—leadership that now has access to state-of-the-art matériel.

Since the United States and coalition forces returned to help Iraq in 2014, the U.S. has also provided the Iraqi military with weapons, vehicles and military training. In 2008, Iraq bought 140 U.S.-built M1 Abram tanks for $2 billion. The U.S. pays Michigan-based General Dynamics Land Systems to repair and rebuild those tanks as necessary. Throughout the Iraqi Civil War, several were captured and operated by pro-Iran militias. Now, without violating Iraq’s end-use policy, the Shiite militias will have legitimate access to Iraq’s stockpile of M1 tanks and other U.S.-origin military equipment.

Full integration with the Iraqi military will also provide the militias with an extra layer of protection. The U.S. and other forces will not be able to target the militias without attacking Iraq’s official military force. Combined with rising tension in the Middle East, foreign powers are unlikely to risk igniting a regional war. Therefore, the Iranian-backed militias will be able to carry out terrorist attacks against U.S. assets without facing retaliation.

This is a trend the Trumpet has followed closely since the early 1990s. In December 1994, Trumpet editor in chief Gerald Flurry wrote, “Such a takeover [of Iraq] by Iran would shock the world … Such a move would, in all likelihood, give Iran power to cause a sizable increase in the price of oil.”

Now that Iraq has been taken out of the picture, Iran is even closer to becoming the reigning king of the Middle East. It may seem shocking, given the U.S. presence in the region right now, but prophecy indicates that, in pursuit of its goal, Iran will probably take over Iraq. At least, it will have a heavy influence over the Iraqi people.

Mr. Flurry writes in depth about Iran’s takeover of Iraq in his free booklet The King of the South:

The booklet also explains how Mr. Flurry used history, geography, current events and Bible prophecy to identify radical Islamic extremism, led by Iran, as the prophesied “king of the south.”

Daniel 11:40 says, “And at the time of the end shall the king of the south push at him ….” Iran is a radical nation that pushes its way around the Middle East. It has one of the most powerful militaries in the region and is the closest Islamic nation in the Middle East to obtaining the nuclear bomb. Its radical support of terrorism, oppressive rule and belligerent flirtation with nuclear weaponry proves Iran is the king of the south. (For additional proof, request your free copy of The King of the South.)

Mahdi’s decree for the complete integration of the Popular Mobilization Units into the Iraqi military will forge Iraq into an iron-willed Iranian proxy state. As full integration nears completion on July 31 and more pro-Iran leaders hold top positions in the Iraqi government, we will continue to watch for more evidence of Iran’s manipulation in Iraq.