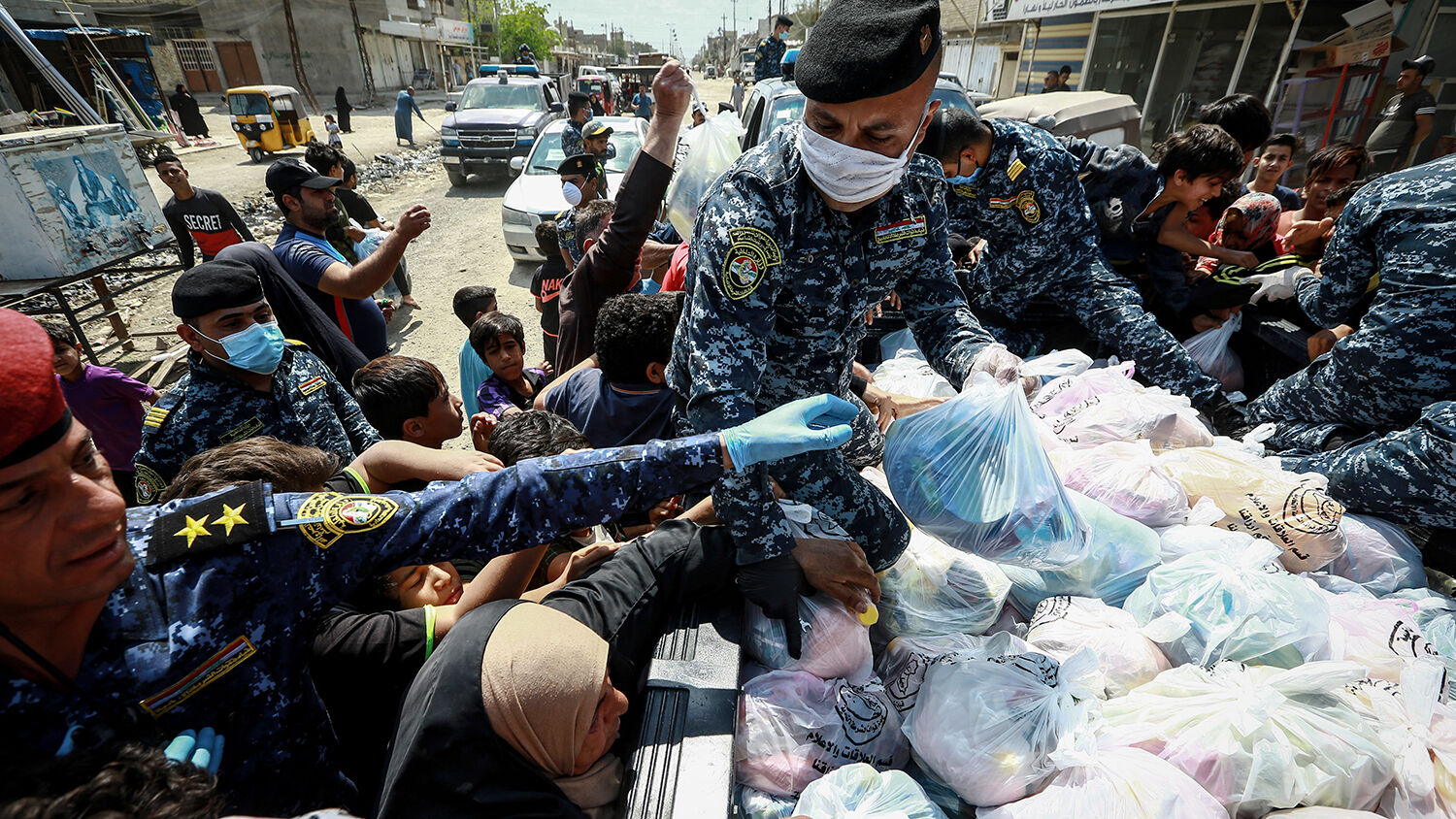 Iraqi police officers distribute bags with basic food and supplies to the low-income people during a nationwide curfew aiming to help fight the spread of covid-19.
Ameer Al Mohammedaw/picture alliance via Getty Images

Millions are at risk. Can governments provide the answer?

The United Nations World Food Program (wfp) said on April 22 that the coronavirus has put over 30 nations worldwide at risk of a famine of “biblical portions.” Currently, 135 million people are at crisis levels of hunger; another 130 million could be on the brink of starvation by the end of 2020.

“We could be facing multiple famines of biblical proportions within a short few months,” said David Beasley, head of the wfp. “The truth is, we do not have time on our side.” The agency only has the capacity to provide food aid to about 100 million people.

With an additional 100 million people expected to require such aid by the end of the year, this coming crisis will further threaten an already strained supply chain.

This is the latest outcome of this pandemic, which has not only killed thousands around the world, but also is taking a heavy toll on national economies. The wfp is asking for $2 billion in aid from the UN for poor countries set to be affected the worst. However, with Western nations struggling to provide for their own people, the provision of funds is far from guaranteed.

Another challenge is that government-enforced lockdowns have restricted the movement of goods and supplies across borders. Existing supply chains are at great risk of being broken.

The threat of hunger looms heaviest over countries in Africa and the Middle East. Earlier this year, nations in East Africa suffered their worst desert locust infestation in over 70 years. The outbreak, involving billions of insects, endangered farmers, the food supply and African economies as a whole. Nations that depend on oil exports, such as South Sudan, are suffering from the plummeting oil prices. And tourism, usually a dependable source of revenue for African nations, is another casualty of the recent lockdown measures.

The war-torn Middle East is similarly at risk. With nations such as Syria and Afghanistan already so dependent on aid, the impact of coronavirus is further endangering the lives of millions of people in the region.

Many families in developing nations benefit from remittances from relatives living in the diaspora. With unemployment levels rising worldwide, these payments are likely to dry up.

Coronavirus has therefore created the perfect storm for a “hunger pandemic,” according to Beasley. This is all in addition to the 821 million people around the world who are already “chronically hungry.”

As far back as 3,500 years ago, as recorded in the Pentateuch, God warned mankind of famines that would occur in the modern age. Some 1,500 years later, when Jesus Christ’s disciples asked Him what the signs of the end would be, He prophesied that there would be international conflict, diseases and “famines … in various places” (Matthew 24:7; Revised Standard Version). This is a prophecy of what would happen in the time we are now living.

In the book of Revelation, the Apostle John was inspired to write about what would take place before the return of Jesus Christ. Chapter 6 contains a prophecy of what are commonly called the “four horsemen of the apocalypse,” representing religious deception, war, disease and famine (verses 1-8).

In our free booklet The Four Horsemen of the Apocalypse, Trumpet editor in chief Gerald Flurry and coauthor Wayne Turgeon write: “The third horseman, riding a black horse, symbolizes famine. In Matthew, Mark and Luke, Christ was speaking of general famines, set against the backdrop of war. The plural use of the word famine refers to the repetitive occurrences of famine down through time, rapidly accelerating immediately before His return.”

We can expect famines to become worse—that is what your Bible says will happen.

Ezekiel 5:12 reveals that one third of the United States and the British Commonwealth, including countries such as Australia, Canada and New Zealand, will be killed in the opening volleys of war. Many of these people will die from the combined destructiveness of the third and fourth horsemen—famine and pestilence. …

We are not discussing some dusty old prophecies. These are dramatic, dire prophecies that lie directly in front of us! The proud, haughty look will melt from the faces of our people and reduce those still barely clinging to life to scrounging through garbage heaps and strewn rubble for their next meal. This great famine will eventually spread to every corner of the Earth before mankind repents in unconditional surrender to God (Philippians 2:10).

The developed world cannot save the developing world. And soon it will become evident that they cannot save even themselves. But God offers hope and a way of escape from all the coming troubles, if we turn to Him. To learn more about how you can escape the coming world disasters, request your free copy of The Four Horseman of the Apocalypse.