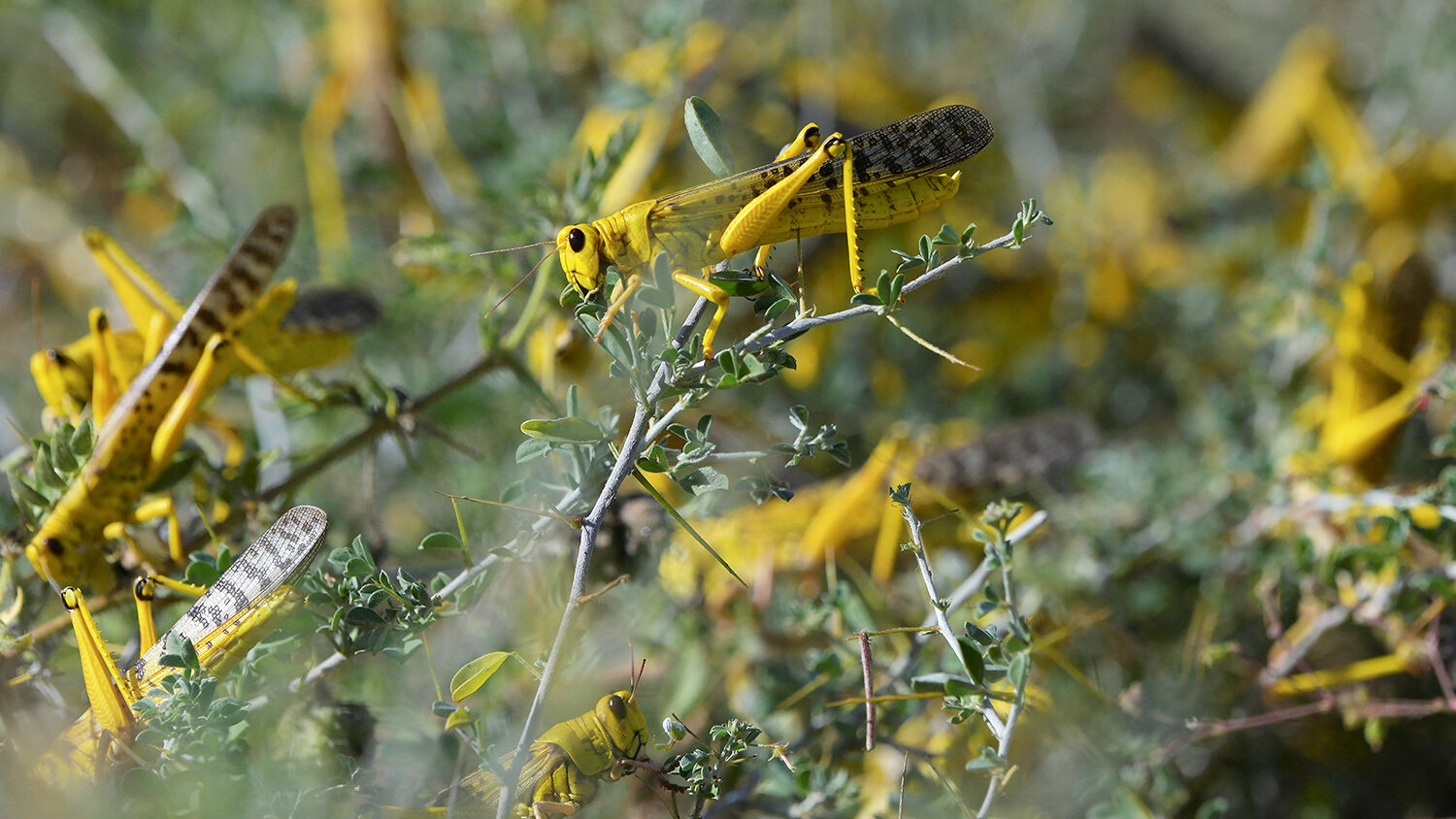 Is God aware of the plight of Kenya’s farmers, and if so, why did He allow it?

Kenya and Ethiopia are suffering their worst desert locust infestation in 70 years. Media began reporting on this in early January, and the United Nations triggered its emergency protocols on January 17. Experts estimate the outbreak involves billions of the hungry insects. The outbreak poses severe danger to farmers, the economy and the food supply.

The situation is an “unprecedented threat to food security and livelihoods” in the entire Horn of Africa, reported the UN’s Food and Agriculture Organization (fao) in response to the growing swathes of infested land.

It can be difficult to understand the scale and devastation of a locust invasion. A small swarm is capable of consuming the equivalent of enough food to feed 35,000 people—over the course of just one day. The largest locust swarm ever measured was 37 miles long by 25 miles wide.

Desert #locusts are the most destructive migratory pests in the .

It is the worse invasion in Somalia and Ethiopia in 25 years and in 70 years for Kenya.

The next planting season is just weeks away.

We need to scale up control efforts fast! pic.twitter.com/W3gLF3TZWY

Kenya is primarily affected, Ethiopia is also suffering under the swarms, and Somalia has declared a state of emergency. The crisis is likely to worsen hunger in the already hard-hit region, which recently experienced crop-destroying rains. These rains provided ideal conditions for locusts to breed, which threatens to worsen the infestation in coming months.

The fao has stated that 14 counties in Kenya are affected. The longer the infestation continues, the greater the risk that the swarm will multiply. “Some swarms have already laid eggs and hatching is almost certainly underway,” wrote the fao. This will increase in February, the main breeding season. If not dealt with quickly, the number of locusts could grow up to 500 times larger by June. Only then will drier weather aid in alleviating their spread.

Associated Press reported on January 25 that over 70,000 hectares were infected in Kenya alone. This is constantly growing. Spray plane crews are working to contain the outbreak, but only five airplanes are available. Treatment so far is insufficient. In Ethiopia, 22,550 hectares have been treated by spray planes, and an estimated 20,000 hectares in Kenya. Officials fear the swarms will spread into Uganda and South Sudan if not dealt with quickly. Many places where these crews operate lack mobile phone signal, meaning that a member of the crew must drive away until communications with the other groups is restored. This has slowed the efforts to relay coordinates to pilots.

Many explanations have been proposed for what caused the infestation. Because the plague is the worst in 70 years, preachers, like James Ng’ang’a of Nairobi, Kenya, have urged the nation to repent and humble themselves. “It is not normal that the country has been invaded by desert locusts and having rain in the month of January,” Ng’ang’a told Nairobi Wire. “I am here to repent our sins and ask God for forgiveness because something is wrong somewhere.”

Is there a reason plagues like locusts or disastrous floods and fires seem to happen with increasing frequency today? Can anything be done to alleviate the suffering brought on by them?

There is a clear answer in the Bible. Ng’ang’a knows that something is wrong, but he does not address the fundamental reason why God sends environmental disasters.

Exodus 10 shows that God has power over the environment. In this account, He miraculously sent a deluge of locusts on Egypt, and later took them all away just as miraculously. God sent this plague to get the attention of the Egyptian leaders who were disobeying His commands. Few today see disasters as God’s way of pointing us back to His law.

God has allowed these locust swarms to hit Africa just as He allows catastrophic floods and fires. To many, the locust plagues are a sign that God isn’t intervening on behalf of man. Many wonder why a loving God would worsen the suffering of impoverished African farmers.

Our free booklet Why ‘Natural’ Disasters? asks, “Can we recognize the love in God’s correction?” God sends environmental disasters to warn us that our disobedience to His law is going to bring more curses. “Doesn’t God love us? is perhaps a common question after a disaster. But shouldn’t we ask the more piercing question: Is it possible that we don’t love God? Might that be the problem?” (ibid).

Soon, food shortages will not be only a Third World problem. Prophecy shows famines, like what’s happening in Africa, will soon reach the United States, Britain and other First World nations. And they will be worse than anything previously seen.

Revelation 6:5-6 say, “And when he had opened the third seal, I heard the third beast say, Come and see. And I beheld, and lo a black horse; and he that sat on him had a pair of balances in his hand. And I heard a voice in the midst of the four beasts say, A measure of wheat for a penny, and three measures of barley for a penny; and see thou hurt not the oil and the wine.” Trumpet editor in chief Gerald Flurry and coauthor Wayne Turgeon write about this scripture in The Four Horsemen of the Apocalypse, saying: “[T]his third horseman of famine will have a specific fulfillment. It is ready to gallop into our immediate future with an impact far beyond the historic and present-day occurrences of localized famines.” Where will this be? “This time,” they continue, “instead of only affecting war-torn regions or the Third World, it will affect the First World nations—the blessed birthright peoples of the lost 10 tribes of Israel.”

In Deuteronomy 28, God spells out the blessings He will pour on His people for obedience and the curses for disobedience. He says that if Israel refuses to obey Him, then “cursed shalt thou be in the field”—the nation’s food production would suffer (verse 16). “All thy trees and fruit of thy land shall the locust consume,” God warns (verse 42).

This prophecy is speaking to America and Britain today. Living contrary to God’s law is bringing on a time of suffering called the Great Tribulation, which will be worse than anything that has come before it (Matthew 24:21-22). The reason for attention-grabbing locust swarms, and even for floods and fires, is that God wants individuals to repent and turn to His law. Only when they do will weather disasters end permanently.

Why does God allow suffering? How is it meant to bring about a positive change in your life? Read our free booklet Why ‘Natural’ Disasters? for the answers.