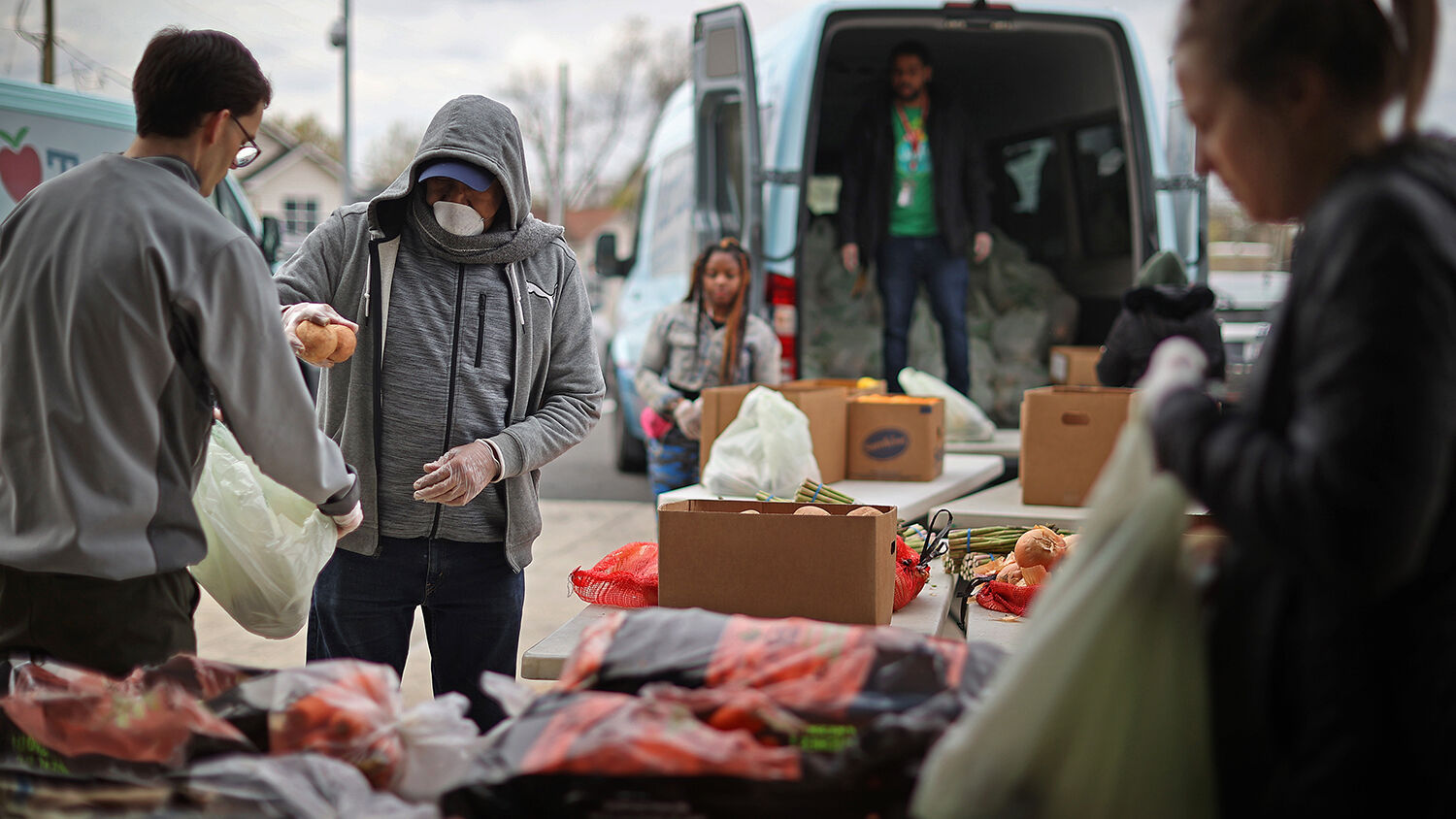 Volunteers and staff of nonprofit organization Martha’s Table help load bags of fresh produce to distribute to people in communities during the coronavirus outbreak on April 1 in Washington, D.C.
Chip Somodevilla/Getty Images

Food shortages will get worse. How should you respond?

Record demand for food combined with a weakened supply chain is causing a risk of shortages throughout America, reported the Guardian on April 2. On a larger scale, the rest of the world is grappling with a similar problem. Nations are stockpiling food, and prices are rising. And all this is only a foretaste of greater food woes in the future.

Food banks and charities exist to serve the poor. Coronavirus has changed this. A wave of middle-class Americans are now turning to charities to supply their meals. Layoffs are only part of the picture. Much of it is also the reaction to an environment of fear. This is a natural extension of the panic-buying mentality on display around the world.

“First, we saw people who lived paycheck to paycheck, got laid off and didn’t know where the next meal was coming from, followed by those who had a couple of weeks of savings,” said Jerry Brown, a media spokesman for St. Mary’s Foodbank. “Now, people who knew about us because they donated or volunteered are coming in for food.”

The United Nations Food and Agriculture Administration said in March that it has “already seen signs that pressures due to lockdowns are beginning to impact supply chains, such as the slowdown in the shipping industry. Disruptions, particularly in the area of logistics, could materialize in the coming months.”

Though food is still being grown, transport companies are at reduced capacity, so food is spoiling before it reaches stores. Some farmers are turning piles of vegetables into mulch and dumping out millions of gallons of milk.

Some dairy farmers are forced to dump milk amid the coronavirus pandemic as mass closures of restaurants and schools have forced a sudden shift from wholesale food-service markets to retail grocery stores, creating logistical nightmares https://t.co/1ACUX8wAwq pic.twitter.com/5WdQI1m5Eg

Outside the U.S., the global food supply has also been affected. In some cases, countries are halting exports of foods they classify as critical and stockpiling it within their own borders. Russia, the world’s top grain exporter, announced it would cap wheat exports on March 27. Vietnam, the world’s third-largest rice exporter, has also restricted sales. As a result, prices of basic commodities, such as wheat, rice, various oils, sugar, carrots and potatoes, are rising.

Poorer nations, which rely on wheat from other nations for their bread production, are at heightened risk of political instability. Rising food prices have been reliable indicators of revolutions throughout history.

UN experts are not always correct; there may not be an immediate famine because of coronavirus—at least not in the developed world. Yet the fragility of the supply chain raises a question: What happens when a bigger crisis strikes?

As the fear of food shortages grows, should you worry?

Food shortages now are a mere foretaste of what is coming, not only for the Third World, but for the developed, industrial world as well. So says your Bible. Bible prophecy indicates global famine will become a lot worse. (To better understand the identity of nations in Bible prophecy, namely America and Britain, read our free book The United States and Britain in Prophecy, by Herbert W. Armstrong.)

Jesus Christ’s disciples asked Him what to expect from world conditions in the end time, just before His Second Coming. He mentioned disease epidemics and famine: “For nation shall rise against nation, and kingdom against kingdom: and there shall be famines, and pestilences, and earthquakes, in divers places” (Matthew 24:7). Disease epidemics like coronavirus are only the beginning. Christ said this was “the beginning of sorrows” (verse 8).

Christ later inspired the Apostle John to record a prophecy for immediately before His return: “And when he had opened the third seal, I heard the third beast say, Come and see. And I beheld, and lo a black horse; and he that sat on him had a pair of balances in his hand. And I heard a voice in the midst of the four beasts say, A measure of wheat for a penny, and three measures of barley for a penny; and see thou hurt not the oil and the wine” (Revelation 6:5-6).

Extreme famine will force nations to ration their food like no other time in history. Our free booklet The Four Horsemen of the Apocalypse explains that “this third horseman of famine will have a specific fulfillment. It is ready to gallop into our immediate future with an impact far beyond the historic and present-day occurrences of localized famines.” Famines will not remain confined to the world’s most impoverished nations. “This time, instead of only affecting war-torn regions or the Third World, it will affect the First World nations—the blessed birthright peoples of the lost 10 tribes of Israel” (ibid).

In another prophecy about the fall of America, God inspired the Prophet Ezekiel to write, “A third part of thee shall die with the pestilence, and with famine shall they be consumed in the midst of thee: and a third part shall fall by the sword round about thee; and I will scatter a third part into all the winds, and I will draw out a sword after them” (Ezekiel 5:12).

Famine and pestilence—which in some cases are better translated as burning or rioting (see our book on Ezekiel for details)—are coming. The coronavirus crisis has shown that when greater troubles come, society will unravel. It will be far worse than anxious shoppers emptying shelves and bickering over toilet paper.

But you don’t need to be afraid like so many others are. As people stockpile food, God offers those who trust Him the assurance of safety, even in times of worldwide crisis. To learn more about how you can be among those who are protected, order your free copy of The Four Horsemen of the Apocalypse.