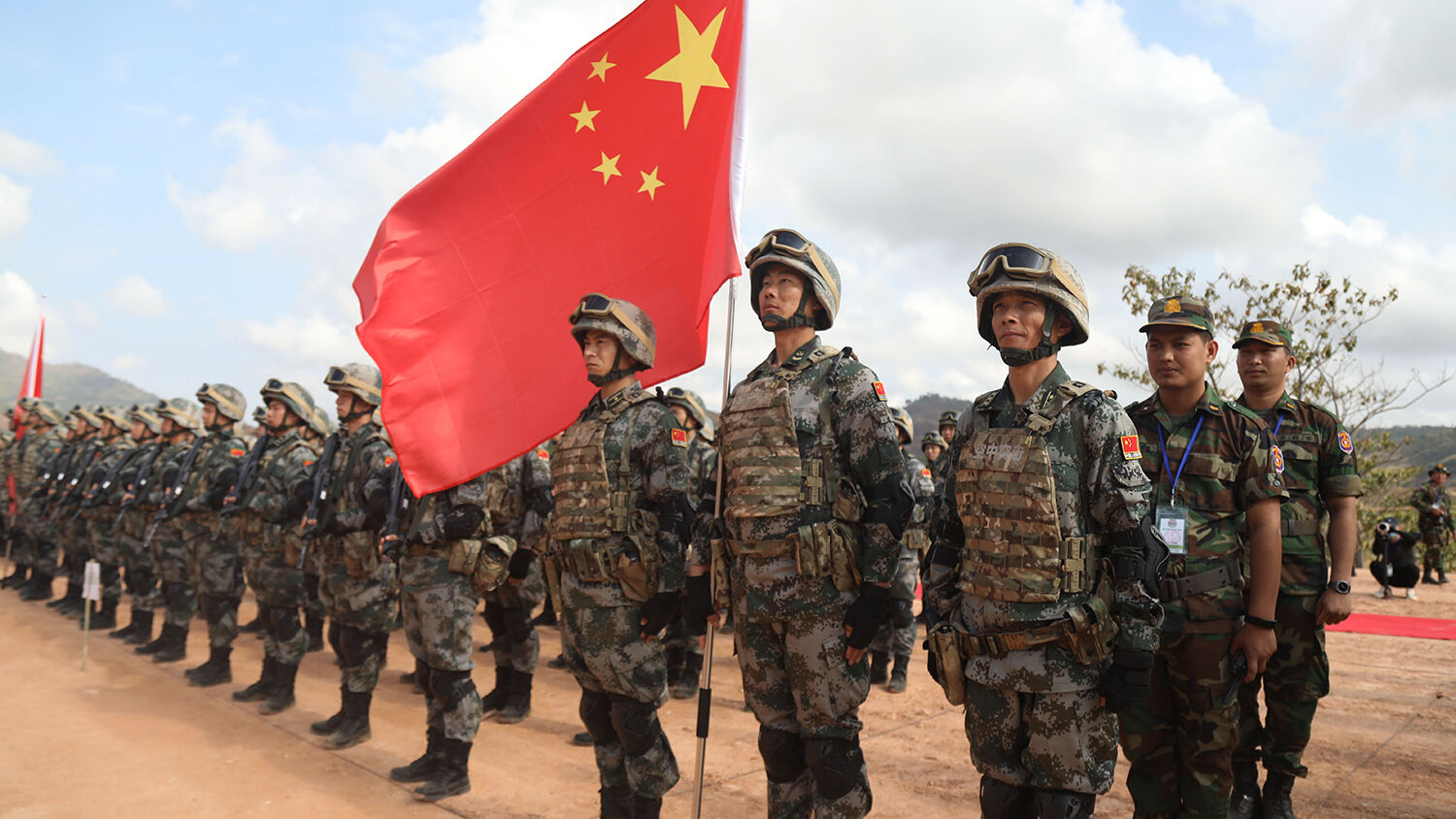 Soldiers take part in the opening ceremony of a joint military exercise of Cambodia and China in Cambodia’s southwestern Kampot province, on March 15.
Xinhua/Mao Pengfei via Getty Images

As worldwide panic over coronavirus dominates the media, China quietly builds up its military.

While the world is preoccupied with the coronavirus, China is quietly expanding its power around the world. Chinese President Xi Jinping has seized this opportunity to intimidate Taiwan, influence Europe, modernize its military, and entrench itself deeper into the South China Sea.

When the world finally became aware of the crisis within China’s borders with the rapid spread of the virus, several speculated that this could be the undoing of the Communist Party. It was even dubbed China’s Chernobyl moment. But a different reality is emerging. Instead of being its undoing, the Communist Party has used the crisis to cement its position within its borders and beyond. In so doing, it has left the world superpower, the United States, looking fragile and weak. Kurt Campbell and Rush Doshi wrote for Foreign Affairs on March 18:

As Washington falters, Beijing is moving quickly and adeptly to take advantage of the opening created by U.S. mistakes, filling the vacuum to position itself as the global leader in pandemic response. It is working to tout its own system, provide material assistance to other countries, and even organize other governments. The sheer chutzpah of China’s move is hard to overstate. After all, it was Beijing’s own missteps—especially its efforts at first to cover up the severity and spread of the outbreak—that helped create the very crisis now afflicting much of the world. Yet Beijing understands that if it is seen as leading, and Washington is seen as unable or unwilling to do so, this perception could fundamentally alter the United States’ position in global politics and the contest for leadership in the 21st century.

China is using the coronavirus to make its global ambitions a reality.

China’s state-controlled Global Times reported that “training for war preparedness will not be stopped even in the middle of the covid-19 epidemic.”

While everyone is distracted, China has taken the opportunity to intimidate Taiwan with few repercussions. Last week, the South China Morning Post published an article titled “In the Coronavirus Fog, Tussling Over Taiwan Goes Under the Radar.” In the last month, China has invaded Taiwanese airspace, ran military exercises across the Taiwan Strait, and damaged a Taiwanese Coast Guard vessel during harassment by a Chinese speedboat. China has become so pushy that a Taiwanese defense official was forced to reassure the public on Monday that the island is prepared for an attack.

China has also been making inroads into Philippine-claimed reefs, building new facilities in the West Philippine Sea. China’s state-run news agency Xinhua reported that the two facilities were research stations intended to “help scientists expand their research into deep sea ecology, geology, environment, material sciences and marine energy.” The facilities built on Fiery Cross and Subi Reefs in the Spratly Islands are both claimed by the Philippines. While these reefs were not included in an international ruling as belonging to the Philippines, they are located closer to the Philippines than another reef that China built an installment on and which was ruled to be Philippine territory.

Meanwhile, China has also used the coronavirus panic to make inroads into Europe. Several European countries have turned to China for help to battle the pandemic and thus China has been hailed as a savior. While sending face masks, ventilators and medical personnel may not seem like a military takeover, it is giving China a greater foothold in the region and opening the door for further cooperation. It has also offered this support to other affected nations. Serbia is one of the nations that, upon the arrival of Chinese doctors, implemented the “Chinese model,” which includes mass testing, isolating all cases and punishing those who break social distancing and curfew rules with three to 12 years in jail. China’s support led to an outpouring of praise from the Serbian president. This is just one of the many ways China has used this pandemic to transport its Belt and Road Initiative (bri) into Europe and beyond, an initiative that also includes global military ambitions.

Serbia is also a prime example of another export China could take advantage of during coronavirus. On March 29, the South China Morning Post published “With Coronavirus Crisis, China Sees a Chance to Export Its Model of Governance.” The article discusses how China could use the bri as a means to export its governance by concentration of power “as an alternative to the Western liberal model.” The Western press is full of praise for China’s authoritarian handling of the crisis (ignoring the negatives of such a totalitarian crackdown), indicating that the West has become more open to this model of governance. This is evident with Serbia’s harsh crackdown on those disobeying quarantine rules, the British police use of drones—almost an exact copy of Chinese tactics, and national data and mobile phone tracking.

China has also been modernizing its military and enhancing its capabilities. It is preparing to paint military aircraft with new coatings to make them harder to detect with military radars. On March 10, the People’s Liberation Army (pla) Navy and Air Force performed a joint exercise that “simulated face-to-face encounters with invading foreign aircraft and warships in the South China Sea.” The exercise rehearsed searching unidentified foreign aircraft, “driving enemy planes out of China’s airspace,” and even “shooting them down with missiles to stop them from attacking Chinese warships.” The pla announced on March 20 that its aircraft had recently performed an anti-submarine drill over the South China Sea.

The United States has been aware of China’s actions. On March 4, the House of Representatives passed the taipei Act (Taiwan Allies International Protection and Enhancement Initiative), which was later signed into law by U.S. President Donald Trump. The bill acknowledges continued U.S. support for Taiwan and promises to help advance Taiwan’s international standing. Sen. Cory Gardner, who cowrote the act, said that the legislation “will send a strong message to nations that there will be consequences for supporting Chinese actions that undermine Taiwan.” The act could also lead to the U.S. reducing its economic, security and diplomatic interactions with nations that oppose Taiwanese independence.

The White House has received several warnings from leading military and political officials stating that America must be prepared for conflict with China. U.S. Deputy Assistant Defense Secretary for China Chad Sbragia warned that China is currently undergoing “one of the most ambitious military modernization efforts in recent history.” He said: “In most of the potential flashpoints in the Indo-Pacific region—the Taiwan Strait, the South China Sea, the Senkaku Islands or the Korean Peninsula—the United States may find itself in a military crisis with China.” He warned that the threat was equally as serious as the Cold War and that U.S. preparations must match that. Sbragia said it was no longer a matter of if but when tensions would escalate. One military analyst said that for China, Taiwan is not the goal, it is merely “the template for how it will eventually threaten every other democracy.”

As the U.S. prepares for conflict, its Marine Corps has proposed a decade-long plan to prepare its force for battle, with a focus on China. This modernization of the Marine Corps includes decommissioning all tanks, reducing infantry numbers, significantly reducing artillery units, reducing the number of amphibious vehicles and some aircraft. This is designed to allow the creation of the Marine Littoral Regiments with shore-based anti-ship weapons, specialized units for seizing and building expeditionary bases, as well as fighting units intended for areas outside of larger U.S. fixed bases. The Marines plan to work more closely with the Navy to prepare for deployment under greater opposition than currently experienced. Meanwhile, the Marines also included in its 2021 budget a request for funding to acquire a ground-launch Tomahawk cruise missile for targeting ships, a weapon banned under the Cold War inf Treaty.

The U.S. has also increased its presence in the disputed waters around China and Southeast Asia. While this has generally been confined to freedom of navigation operations, the U.S. also sent a more blatant warning to China. On March 19, the U.S. Navy conducted a live-fire missile drill in the Philippine Sea. Beijing military specialist Zhou Chenming said that because these drills are not common, it “could be seen as a warning to the People’s Liberation Army.” Beijing military analyst Li Jie agreed that the “U.S. Navy wants to tell China that they can counter the pla’s advanced missiles.” Meanwhile, Hong Kong-based military commentator Song Zhongping said, “The Philippine Sea is also the critical maritime artery for pla vessels when they sail to the western Pacific and Indian oceans. The U.S. Navy needs to further enhance its military presence in the region, signaling that political trust between the two countries is falling.”

The Trumpet watches China’s military build-up and leadership on the global stage because of end-time prophecies about China. Our free booklet Russia and China in Prophecy states, “Keep your eye on China. Within a few short years, this nation—the ascendant, proud China that has emerged today—will dazzle the world. Watching its vault into great-power status truly is a look at the future.”

There are two major end-time prophecies that China will play a role in. The first is found in Isaiah 23, which discusses a “mart of nations.” This mart that will include both European and Asian nations—including China, as Mr. Flurry explains in his booklet Isaiah’s End-Time Vision. Europe and Asia are becoming more interdependent through the coronavirus. With several European nations relying on China to provide their needs and America being left to itself, the bonds are being strengthened for this mart of nations. For more about how the coronavirus is doing this, read Trumpet writer Jeremiah Jacques’s article about how the coronavirus is laying the foundation for the mart of nations.

The other major prophecy that is coming into focus with China’s actions during the coronavirus panic is the “kings of the east” alliance. Daniel 11:44 reads, “But tidings out of the east and out of the north shall trouble him [the king of the north—a German-led European Union]: therefore he shall go forth with great fury to destroy, and utterly to make away many.” Though Europe and Asia will work together for a while to bring America down economically, a military clash between the two blocs is coming. That is why China’s military preparations are so significant. Other scriptures also refer to this kings of the east alliance—you can learn more about it in Russia and China in Prophecy, which states:

In the next few years, there will be a staggering turn in world events! A giant Asian superpower, with a modernized Russia and China at the helm, will dramatically affect the course of history. This emerging power bloc—a conglomerate of peoples which comprise over half of the world’s population—will be deeply involved in the tumultuous tide of events that will lead to the conclusion of mankind’s 6,000 years of self-rule!

The framework for this tumultuous turn of events is being laid right now. Even as the rest of the world panics over coronavirus, don’t forget to watch how China is using this crisis to its advantage. You can understand its actions today by reading Russia and China in Prophecy.