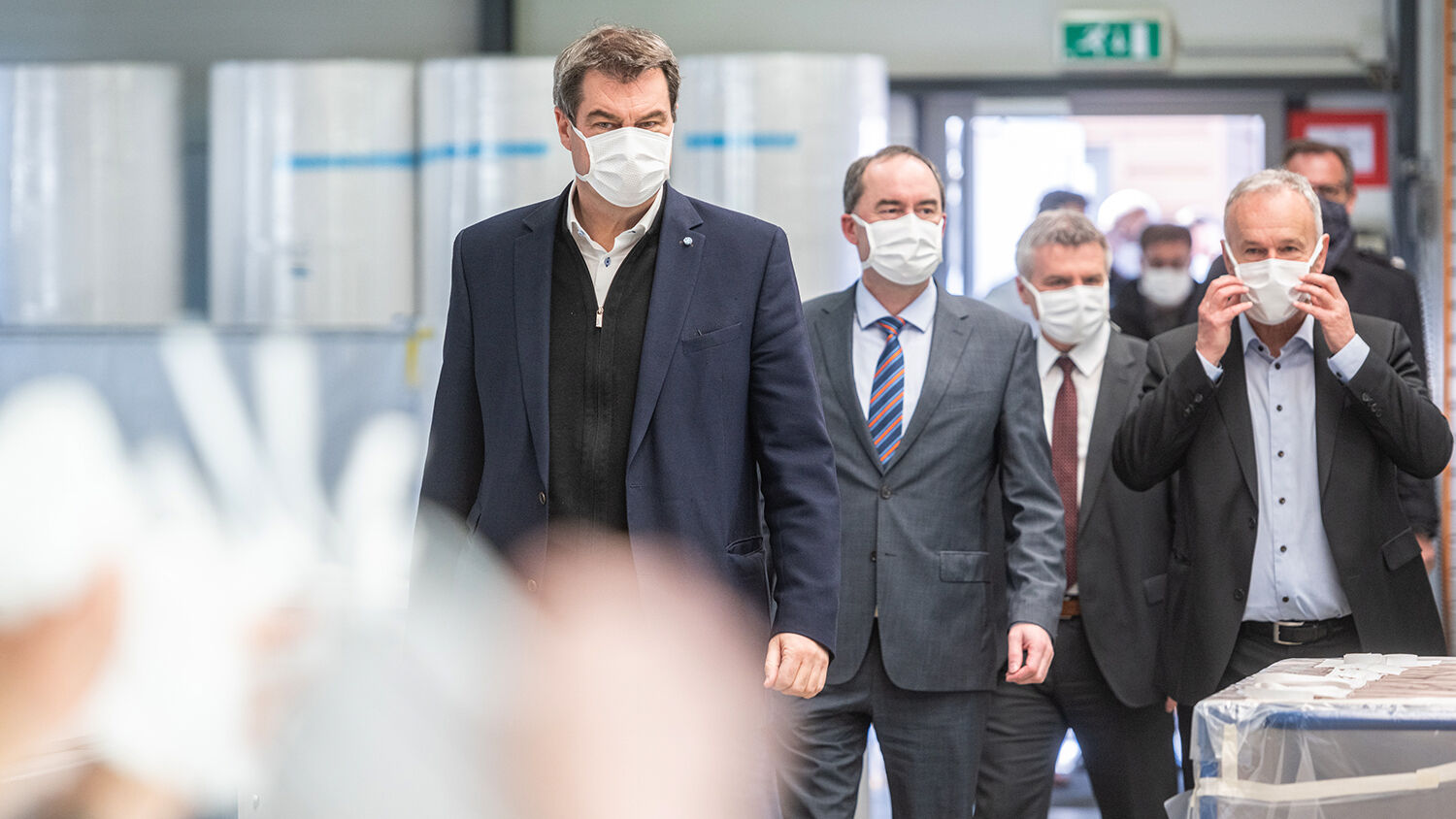 Bavarian State Premier Markus Söder visits a production hall of the automotive supplier Zettl on April 2. Due to the coronavirus crisis, the company has switched its operations to the production of protective masks.
Armin Weigel/picture alliance via Getty Images

As prophecies hasten toward fulfillment, the ongoing pandemic could transform German politics.

In February and early March, Germany was in the middle of an unprecedented leadership crisis. Various politicians were grappling for the upper hand. The outbreak of coronavirus put this debate on hold—or so it appeared. Although the debate is not currently being discussed, the contestants are still feverishly working to become the national favorite. They are now striving to prove themselves through strong government action.

In times of crisis, Germans are prone to look to strong leadership. The coronavirus crisis has proved this once more.

At the beginning of February, it appeared that Chancellor Angela Merkel’s long-time rival, former politician and corporate lawyer, Friedrich Merz, had the highest chance of taking leadership of the Christian Democratic Union (cdu), eventually becoming Germany’s next chancellor. He was viewed as the ideal man to stop the rise of far-right party Alternative für Deutschland and help German businesses to excel.

But the coronavirus changed this.

Merz caught the virus and had to go into quarantine. While others worked to fight the virus, Merz worked from home, reporting about the stages of his illness. Those on the front lines, directly managing the crisis, grew in popularity while Merz faded from view.

“Crisis scenarios traditionally don’t help those on the sidelines [who are] giving more-or-less clever remarks,” former Defense Minister Karl-Theodor zu Guttenberg told Newsmax. “Friedrich would have had a good chance without [the covid-19 virus]; the equation has shifted in favor of those who are currently in charge.”

“The crisis is the hour for those in power—that is an old political principle,” Die Welt wrote (Trumpet translation throughout). “It also applies to the current situation. Those who do not belong to their circle can hardly excel.”

“People crave leadership,” Die Welt quoted a Bundestag member saying. The newspaper went on to explain that three weeks ago, this same member, “like many others, was convinced that the new strongman in Germany and the central figure in the Union would be Friedrich Merz. Others expected Laschet. But the coronavirus has shifted the perspective. In the meantime, many in the cdu are currently looking to Söder.”

It is crucial to watch how the German people are reacting to this crisis. If Germany’s history has taught us anything, it’s that yearning for a strongman is a dangerous sign.

Of all the state premiers in Germany, Söder has taken the most radical actions in the crisis. Rather than coordinating joint actions with other state premiers, he has acted on his own. In Bavaria, Söder enforced the first lockdown in Germany. Though some accused him of taking away people’s freedoms, he grew in popularity—not only in Bavaria, but in all of Germany. He is viewed as the strongman who dared to act while others debated.

Laschet watched what happened in Bavaria and attacked Söder head-on. In a guest post for Welt am Sonntag, he wrote: “The rule of law and democracy always apply. It is not the quickest decision that is the best, but the one that is effective, and at the same time, conforms to the constitutional principle of proportionality.”

Even though Laschet may have the voice of reason on his side, in times of crisis, people tend to gravitate more toward men of action than truth-seekers. What good are rule of law and democracy when the people themselves are willing to give them up? Similar rules didn’t prevent Adolf Hitler’s rise.

Instead of being seen as a dire warning, Laschet’s criticism against Söder was interpreted as an attempt to defend his own bid for the chancellorship. What’s more, since Söder had promised previously to stay out of the chancellorship race, he came across as a man who cares for the lives of those affected by the virus.

In February, Jens Spahn gave up his bid for cdu leadership and decided to support Laschet instead. Prior to the coronavirus crisis, Spahn had only stood out for his strong opposition to Merkel in the refugee crisis. But since he is now leading the Health Ministry in what could be the nation’s greatest health crisis, he is in an ideal position to prove himself as a strong leader. By sacrificing his political ambitions to support Laschet, his efforts to fight the coronavirus are seen as altruistic.

Once the pandemic is under control, the first major political decision Germany will have to settle is who will lead the cdu. While Merz, who has recovered from coronavirus, could surprise many with a comeback, the common consensus now is that the future leader will be either Laschet or Spahn.

Söder, who leads the cdu’s sister party, the Christian Social Union (csu), will likely not support Laschet, considering their recent dispute. Without Söder’s support, Laschet’s chances decline significantly, which could give Spahn the chance to seize the cdu leadership.

Both Spahn and Söder have made plenty of mistakes. They have proved their ignorance in the crisis and their willingness to seize the people’s freedom. But all this doesn’t seem to matter to the German people. All that matters is that these men were willing to take action in a time of uncertainty and widespread fear. Whatever the outcome, Germans are gravitating toward strong leadership.

All of this makes plain that the coronavirus crisis could make way for a strongman leader in Germany.

As Söder rises in popularity throughout Germany, he “has the best chance of becoming the first csu leader who is asked by the sister party to put himself at the service of the whole,” as Die Welt wrote. Prior to Söder, csu legends like Franz-Josef Strauss and Edmund Stoiber had to first win a fierce competition before they were selected as the cdu-csu’s chancellor-candidate. Both eventually lost the following elections.

Recent polls, however, show that Söder currently has the best chance to lead the cdu-csu to victory in the next election. “With him as candidate for chancellor and Spahn as cdu chairman, a duo that had actually left the race could end up at the front,” Die Welt wrote.

But the only thing that can be said with certainty right now is, nothing is certain.

The current pandemic, however, has clearly shown that crises can dramatically change lives, politics and nations. While nothing seems certain in such situations, there is one sure foundation we can rely on: Bible prophecy.

The Bible reveals that 10 strong leaders will rise in Europe in the end time, right before the Second Coming of Jesus Christ. These prophecies are vividly depicted in Daniel 2 and Revelation 17.

Revelation 17 in particular shows that these 10 leaders will rise to power at approximately the same time and give their power unto “the beast.” As the late theologian Herbert W. Armstrong explained in Who or What Is the Prophetic Beast? the term “beast” can refer to a kingdom or its leader.

Bible prophecies are hastening toward fulfillment.

As theTrumpet.com assistant managing editor Richard Palmer explained in “Coronavirus Brings the EU Its First Dictator,” we are currently seeing the rise of dictatorial rule in Europe at the same time as unprecedented financial turmoil.

Who will be the leader who uses this crisis to rise to the helm of Europe? Various biblical authors throughout millennia have prophesied of this strongman. We may soon see him appear.

The Trumpet has, for years, pointed to Karl-Theodor zu Guttenberg as the most likely man to fulfill this prophecy. Mr. Flurry explained why in “Is KT zu Guttenberg About to Come to Power?”

Guttenberg’s flattering of those in charge may play a part in his eventual ascent to this top position (Daniel 11:21). While it remains to be seen who will fulfill the role of the prophesied 10 kings and this overarching ruler, it is of utmost importance that we understand the underlying prophecies. I urge you to request Who or What Is the Prophetic Beast? by Herbert W. Armstrong for more detailed understanding. Continue to watch Europe as world events evolve in light of Bible prophecy.