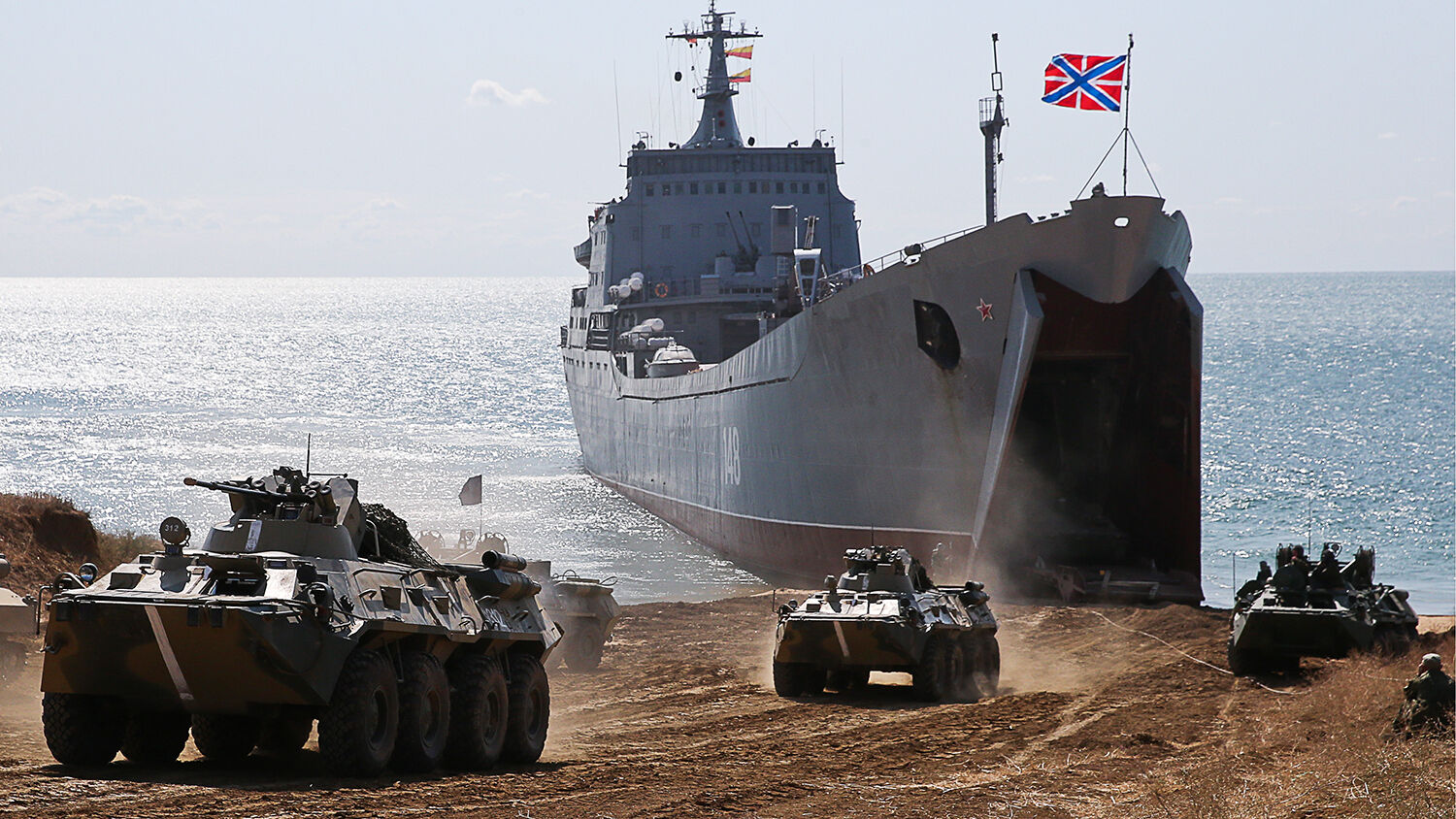 Armored vehicles of the Russian Navy disembark during an amphibious landing exercise at the Opuk training area on Crimea’s Black Sea coast on Sept. 21, 2019.
Sergei Malgavko\TASS via Getty Images

As the world continues to panic about coronavirus, the kings of the east are preparing to unite.

Russian news agency tass reported on March 13 that the Russian Pacific Fleet “preliminarily agreed upon the location, the timeline and the membership” of a naval exercise with Indonesia. This exercise will be the first ever between the two nations. The move is an indication of Russia’s determination to strengthen its defensive ties with key Asian states.

The inroads such an exercise will make are massive. This year Russia commemorates 70 years of ties with Indonesia, a defense relationship stretching back to the Cold War.

Such developing relationships are making the United States nervous. President Donald Trump has made efforts to scupper burgeoning military cooperation between Asian nations.

However, it appears Indonesia has not abandoned its desire to purchase the Russia-made fighter jets, with the purchase of 11 Su-35s appearing on its defense budget procurement plan for 2020–2024. This surprising defiance of the U.S. comes from Indonesia’s lofty military ambitions.

Recent regulatory changes in Indonesia indicate a desire to revive dormant nuclear energy. In February, an “omnibus bill” was submitted to parliament that indicates an inclination toward private sector investment in nuclear energy. Indonesian President Joko Widodo wants the bill to pass in a matter of months.

According to the Nikkei Asian Review, Indonesia has harbored nuclear ambitions for decades. This bill would allow the government’s sanctioned National Nuclear Energy Agency to partner with the private sector in nuclear energy development. This would be a solid first step to ultimately being able to make the transition from nuclear energy to nuclear weapons.

While the nation is still a long way from becoming a nuclear power, its ambitions are clear. And this ambition is translating into military deals with Russia and China, and now the joint naval exercises with Russia.

The tass report was vague and lacking specifics on the size and scope of the exercises. It is possible that the Russian fleet is wary of more U.S. involvement in its military relations and thus aims to be as ambiguous as possible in releasing information.

Whatever the case may be, it is clear that Russia is determined to increase and strengthen its ties in Southeast Asia. Indonesia, in turn, is purposefully pursuing a stronger military presence and might, and it sees Russia as a pathway to achieve that goal.

Bible prophecy speaks of a powerful end-time Asian military alliance. It will comprise soldiers, military equipment and firepower in a combined force of several Asian nations. The Bible calls this coalition “the kings of the east” (Revelation 16:12).

Trumpet editor in chief Gerald Flurry writes in his free booklet The Prophesied ‘Prince of Russia’ that the main members of this alliance are Russia and China. However, it will also include other Asian nations such as Japan, India and perhaps even Indonesia. Mr. Flurry writes:

Current events show this Asian army is taking shape already. You can see it in Putin’s growing authoritarianism, and also in his outreach to other Asian powers. Russia has supplied China with many military armaments over the last decade or so; it also helped the Chinese go nuclear. For many years the Russians have been allied with China, at least to some degree.

But there will also be other powers involved.

Russia is prophesied to lead this alliance. In recent months, it has negotiated multibillion-dollar military trade pacts with China and India. It has taken steps to heal relations with Japan. It is fostering warmer ties with the Philippines, another aspiring nuclear power. And now it is pursuing deals with Indonesia. Russia is preparing to lead this Asian bloc.

With coronavirus destabilizing the world, the stage is being set for a reduction of Chinese power, Russia’s main regional rival, and a corresponding Russian surge. This could bring about Russia’s dominance of Asia, as the Bible prophesies. The increasing cooperation between Russia and Indonesia serves to reinforce these prophecies.

To learn more about these prophecies, request your free copy of Russia and China in Prophecy.