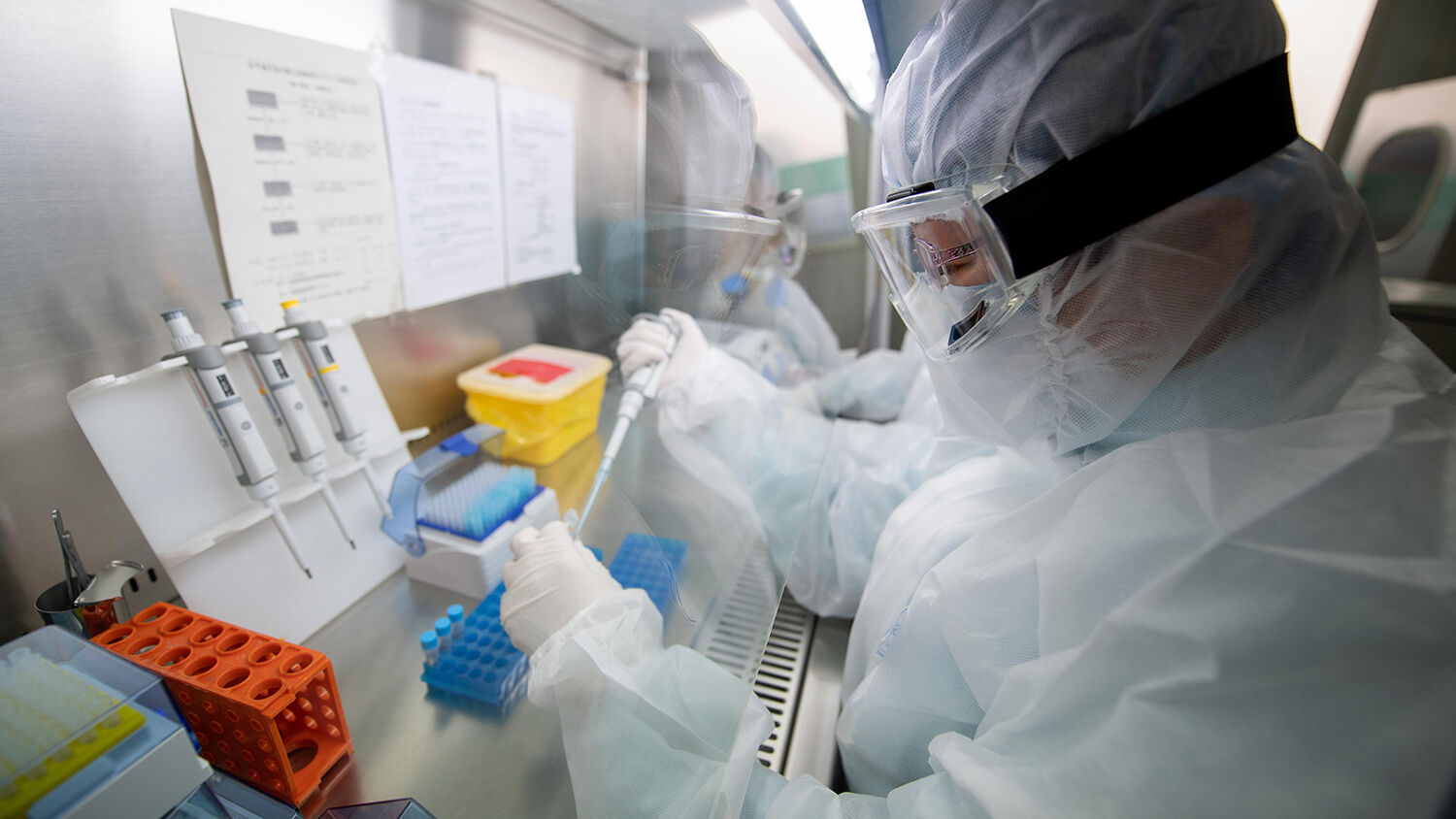 A medical worker works on samples to be tested for coronavirus at a community health-care service center on March 13 in Taiyuan, China.
Wei Liang/China News Service via Getty Images

The disease has practically brought the world to a standstill.

The World Health Organization officially designated coronavirus a pandemic on March 11. A pandemic is a disease that spreads in multiple countries across the world at the same time. The most recent pandemics include diseases such as the H1N1 swine flu and hiv/aids. Now they are joined by coronavirus, with cases outside of China having increased 13-fold in the last two weeks.

.@WHO is deeply concerned by the alarming levels of the #coronavirus spread, severity & inaction, & expects to see the number of cases, deaths & affected countries climb even higher. Therefore, we made the assessment that #COVID19 can be characterized as a pandemic. https://t.co/97XSmyigME pic.twitter.com/gSqFm947D8

In total, the disease has infected about 169,000 people worldwide, and killed about 6,500. This gives it a mortality rate of about 3.8 percent.

While the spread of the disease has slowed in China, it is gathering speed in Europe, other East Asian countries and the U.S. Governments are taking action.

With over 24,000 cases and 1,800 deaths so far, Italy has been affected the worst, outside of China. It has, therefore, taken some drastic measures to stop the spread.

In a televised address to the nation, Prime Minister Giuseppe Conte announced the mandatory closure of all bars, restaurants, salons, barbershops and nonessential company departments. Only supermarkets, food stores and chemists are to remain open.

Streets are empty, tourist hubs are abandoned, and Italian league soccer games are being played in empty stadiums where only the echoes of the players’ shouts are heard. Almost everyone is in quarantine.

Italy’s Milan central station is eerily empty, and it’s the same situation in many parts of Rome as the country is on a strict lockdown in a fight against the #coronavirus https://t.co/mv1QwZYN2R pic.twitter.com/k2HjiuiNF0

In addition, according to Italian newspaper Il Sore 24 Ole, anyone who exhibits symptoms of illness and refuses to self-quarantine could face up to 21 years in prison for “intentional murder.”

Denmark, Norway, Estonia and Latvia have also closed schools and universities, and placed restrictions on planned public events. Of these measures, Norwegian Prime Minister Erna Solberg said, “We must be prepared that today we will come with the strongest and most radical measures we have had in peacetime in Norway.”

As such, the free movement of citizens throughout the European Union, widely considered the EU’s crowning achievement, is also under threat because of the disease. Several European countries are introducing border checkpoints for the screening of all those engaging in travel across the Continent.

Across the Atlantic in the U.S., days after an usher was found to have coronavirus, New York announced it would be shutting down Broadway and all gatherings over 500 people. Additionally, after two schools in the Bronx were closed after one student had been found to be infected, Mayor Bill de Blasio announced that all public schools in New York would be shut down, affecting over 1,800 schools and about 1 million students. “There is a real possibility,” de Blasio said, “that by closing our schools now, we may not have the opportunity to reopen them in this school year.”

California has imposed similar measures restricting gatherings of more than 250 people, including sporting events, conferences and concerts. The Roman Catholic archdiocese of Seattle has also suspended all public masses, with bishops in Virginia and Washington, D.C., saying they would do the same.

President Donald Trump has been widely criticized for a perceived poor response to the outbreak, but he has also taken serious action against the disease, banning all travel to and from Europe for the next 30 days.

The National Basketball Association announced last week that it was suspending the rest of the season indefinitely, after two basketball players tested positive for the disease. The National Collegiate Athletic Association canceled the March Madness basketball tournament.

In motorsports, the Australian Grand Prix was canceled. The Bahrain and Vietnam races were canceled soon after as well, and the Spanish and Dutch Grand Prix are now also being called into question.

In soccer, the Spanish league suspended all games for the next two weeks after Real Madrid’s first team self-isolated, and various European club games are already being played behind closed doors. International friendly games, such as Wales vs. U.S.A., have been canceled, while the Euro 2020 Competition also faces suspension.

Rugby league games between teams from Scotland, Ireland, Wales, Italy and South Africa have been suspended until further notice. The Tennis atp tour has been suspended for six weeks, while the Golf Players Championship instituted a spectator ban beginning March 13.

So many normal aspects of life and day-to-day activities have been impacted by coronavirus. People are fighting over toilet paper; streets are empty; fans are worried their favorite celebrities are about to die. Sporting events, concerts and travel have all been suspended or canceled. Disney is closing theme parks and some people can’t even go to church. Stock markets are tumbling as fears over the disease increase. The Federal Reserve cut its rates to zero to stabilize the economy. Politicians and public figures are being tested for the disease, with some, like Brazil’s communications chief and actor Tom Hanks, testing positive; while others, like Canadian Prime Minister Justin Trudeau and his wife, are simply self-isolating.

This is only one disease that has infected about 170,000 people. This one disease has caused mass panic all over the world and triggered responses that have practically brought the world to a standstill.

According to the Centers for Disease Control and Prevention, the 2009 H1N1 pandemic infected up to 90 million people in the U.S. alone, killing an estimated 500,000 people worldwide. Coronavirus has infected and killed far fewer globally. While it has not yet reached maximum saturation levels, it is currently not as deadly as other pandemics have been.

And yet, paradoxically, the levels of panic caused by coronavirus are greater than almost anything seen in the modern era. Social media and better modes of communication have surely played a part in this.

What happens when it is not just one pandemic rapidly spreading all over the world, but several diseases, infecting and decimating global populations? What will happen to the fabric of society—to travel, sports, shopping, human interaction, international relations, the global economy—when the biblically prophesied “four horsemen of the apocalypse” begin to ride more powerfully?

Jesus Christ prophesied of such a time when nations would rise against nation, “kingdom against kingdom: and there shall be … pestilences … in divers places” all before His return (Matthew 24:7). In “Coronavirus and Other Modern Plagues in Prophecy,” Trumpet editor in chief Gerald Flurry wrote:

These are not dusty old prophecies. They are mostly for our time today! They are dramatic, dire prophecies whose fulfillment lies directly before us! Multiple millions of people are prophesied to perish from sickness and disease! So we should expect diseases like this new Wuhan coronavirus to get worse, and to eventually spread like medieval pandemics and kill millions of people! Whether or not this specific new outbreak will cause such ruin, these prophecies are sure.

What we are seeing happening right now is a harbinger of what is to come. It is a sign of how close we are to the glorious return of Jesus Christ. But before that happens, things will get a great deal worse. To learn more about what is just ahead and how to better prepare for it, please read “Coronavirus and Other Modern Plagues in Prophecy.”