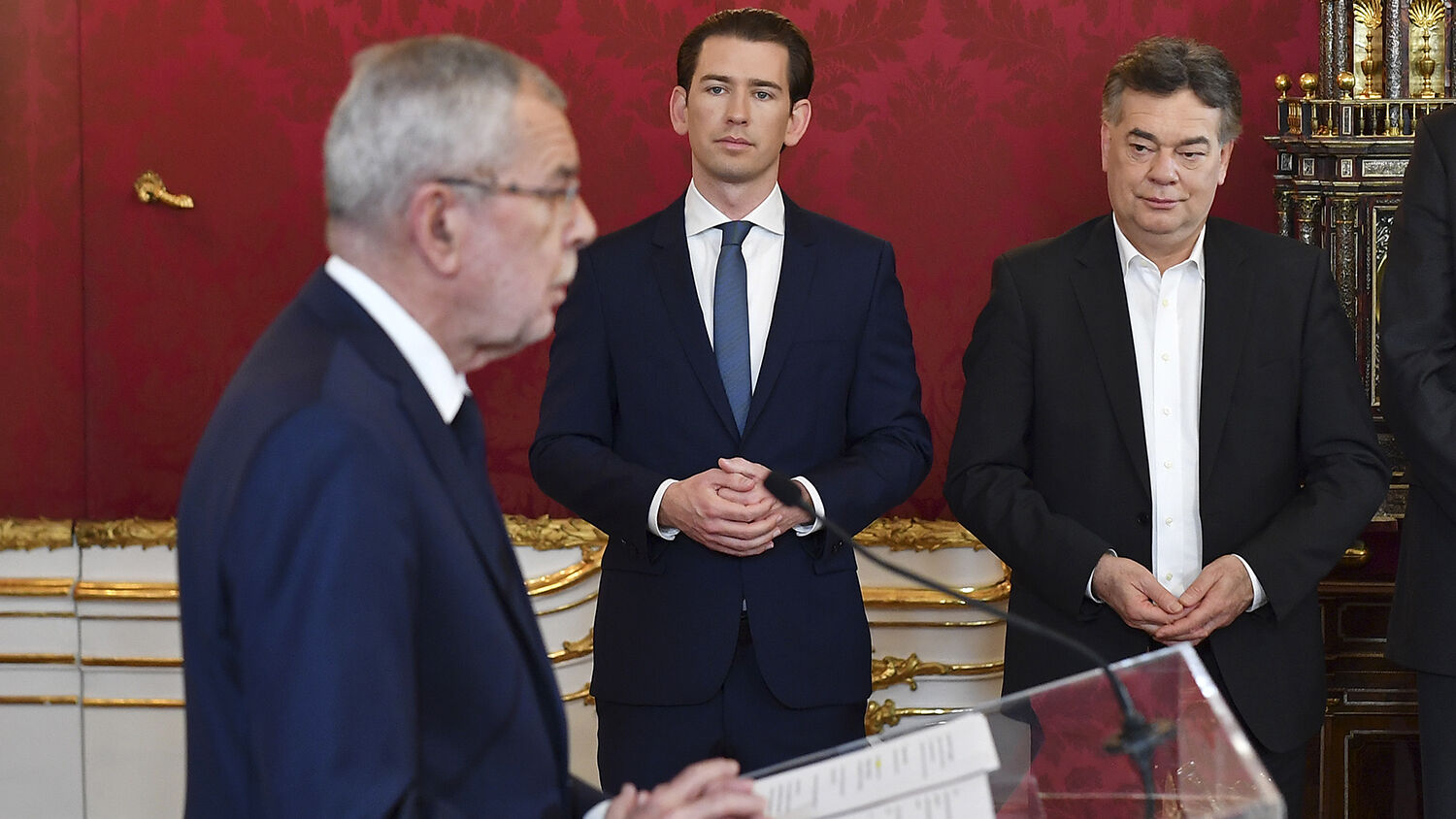 Though the green wave may not sweep through all of Europe, a more important trend is gaining momentum.

Sebastian Kurz was officially sworn in as Austria’s chancellor on January 7. Kurz has made a dramatic turnaround from governing with the far-right Freedom Party to governing with Austria’s Green Party. Perhaps the only thing the Greens have in common with the far right is enabling Kurz’s rise to power.

Many analysts see the coalition government between Werner Kogler’s Green Party and Kurz’s People’s Party (övp) as a model for Europe’s future. Focus Online headlined: “Why Sebastian Kurz and Austria Serve as Good Examples for Germany” (Trumpet translation throughout).

Europe’s young people especially are concerned about the future of our planet. Many believe that climate change is the cause of various weather disasters, causing Europe’s Green parties to experience a dramatic boost in popularity.

Allying with this increasingly popular movement was a clever political power move for Kurz.

Just a few years ago, European environmentalists were overshadowed by the refugee crisis. Starting in 2015, millions of refugees from Africa and the Middle East sought a new life in Europe. Civil wars, government breakdowns and shifting economic conditions motivated many to risk the journey. Thousands died on the way; millions found a temporary dwelling in Europe.

Europe’s willingness to help was plenteous, in the beginning, but it also gave rise to Europe’s far right and demands for a closed border policy. Sebastian Kurz was Austria’s foreign minister at the time and heard the people’s cry. He opposed the stance of German Chancellor Angela Merkel, initiated the closure of the Balkan routes for refugees, and skyrocketed in popularity. Through various political power plays, he became Europe’s youngest head of government.

At the time, Austria’s far right helped bring him to power.

Kurz’s sudden shift to allying with the Greens has caused some to wonder if he is only seeking power.

Kurz himself claims there are no contradictions with his previously stated goals for Austria: “It is possible to protect the climate and the borders at the same time,” he said.

Europe’s Green parties, of course, have greater ambitions than the mere goal of protecting the climate. On the political spectrum, they could almost be called far left. From their founding, socialist and Communist ideas have been imbedded into their agendas but disguised as environmentally friendly policies. (Read “The Greens and the Extremes” to learn more about the parties’ origins and policies.)

In the election campaign, Kurz often ridiculed the Greens’ extreme policy proposals. But now he claims he has found a way to combine the best of their ideas with the best of his. Austria’s Krone editor Claus Pandi wrote that Kurz has delivered a masterpiece of political power and negotiating tactics. “A steely will to power, a portion of cold-bloodedness and perfect craftsmanship are the foundations of his rise,” Pandi noted.

As with his coalition with the Freedom Party, it is clear that Kurz’s power position is unquestioned. Kurz again makes the promise that the core demands of both parties will be fulfilled: “It is possible to reduce the tax burden and to ecologize the tax system,” he said.

Kurz intends to keep a tight rein on the Green Party. Through a parliamentary speaker, Kurz announced “that the övp believes the tax cut should be carried out immediately—but that large Green projects, such as the CO2 tax, on the other hand, will first be extensively evaluated in a task force,” n-tv.de noted.

Kurz Accused of Being ‘Baby Hitler’

Though Kurz is entering a coalition with one of the most migrant-friendly parties there is, his stance on the topic hasn’t changed. In an interview with the German Bild Zeitung, Kurz said that his strong stance on the migration question will remain at “the core of his government.”

In other words, Kurz is saying if you let refugees drown in the Mediterranean, others will learn the lesson and not attempt the journey.

His comments promoted a tweet from Mission Lifeline’s sea rescuers that stated, “#BabyHitler in the BILD: extreme right.”

The Greens’ decision to enter a coalition government with Kurz has likely disappointed many of their core voters. Going forward, the Greens may have a similar experience to that of Kurz’s previous coalition partners, who fell in polls from 26 percent in 2017 to 16 percent in last year’s election.

Some hope that Austria’s chancellor is starting a wave of green economic policies that will sweep throughout Europe. While Kurz may bring about a few more environmental policies, another trend is more important: his rise as Austria’s strongman.

Kurz is dominating his party and Austria’s government as a whole. In 2017, when he took over the party leadership of the övp, Kurz said that his party would go into the election under a new name: Liste Sebastian Kurz-the New People’s Party.

Today, Kurz is known around the world, while hardly anyone outside of Austria could name his predecessor.

He is rising in popularity, while opponents diminish into insignificance. The young chancellor was willing to endure criticism for cooperating with the far right. He had an explanation for every scandal and smiled at those who accused him of being a brutal, power-hungry politician.

His rise not only affects the few million Austrians; it denotes a trend the Bible foretells will impact all of Europe.

Austrian writer Karl Kraus noted during World War i that Austria was “the laboratory for the end of the world.” To this day, historians and political analysts often refer to events in Austria as a sort of harbinger for Europe’s future.

In some ways, this is true. Various European leaders see what Kurz is doing and seek to imitate his success.

The Bible’s prophecies about modern Europe foretell that it will be ruled by 10 kings, or strongmen, who will rule a European superstate: “And the ten horns which thou sawest are ten kings, which have received no kingdom as yet; but receive power as kings one hour with the beast. These have one mind, and shall give their power and strength unto the beast” (Revelation 17:12-13). The time frame for this prophecy is the last days, or the time right before Jesus Christ’s Second Coming.

During his first trip to Brussels in 2017, Kurz was greeted “like a king,” Bild reported. And as each year passes, Kurz is ruling Austria more and more like a king.

Europe, during the time of the Holy Roman Empire, was ruled by kings. The Bible reveals that this empire will rule Europe again in these last days, though their leaders may use different terminology for their rulership positions.

For decades, the Trumpet and its predecessor, the Plain Truth, have predicted that Austria would be part of this empire.

The late Herbert W. Armstrong, editor in chief of the Plain Truth, asked in a co-worker letter dated Aug. 27, 1980: “Will Poland free itself from Soviet domination and join with Yugoslavia, Romania and possibly Czechoslovakia—and with Germany, Italy, France, Spain, Portugal and Austria—in a resurrected medieval ‘Holy Roman Empire’ to dominate Europe and equal the ussr and the U.S.A. in world power?”

The Bible clearly shows that instead of a green wave, a wave of strongmen will sweep through Europe and dramatically change the direction of the Continent. If you want to know what this direction will look like, I encourage you to read “The Holy Roman Empire Goes Public—Big Time!” by Gerald Flurry.